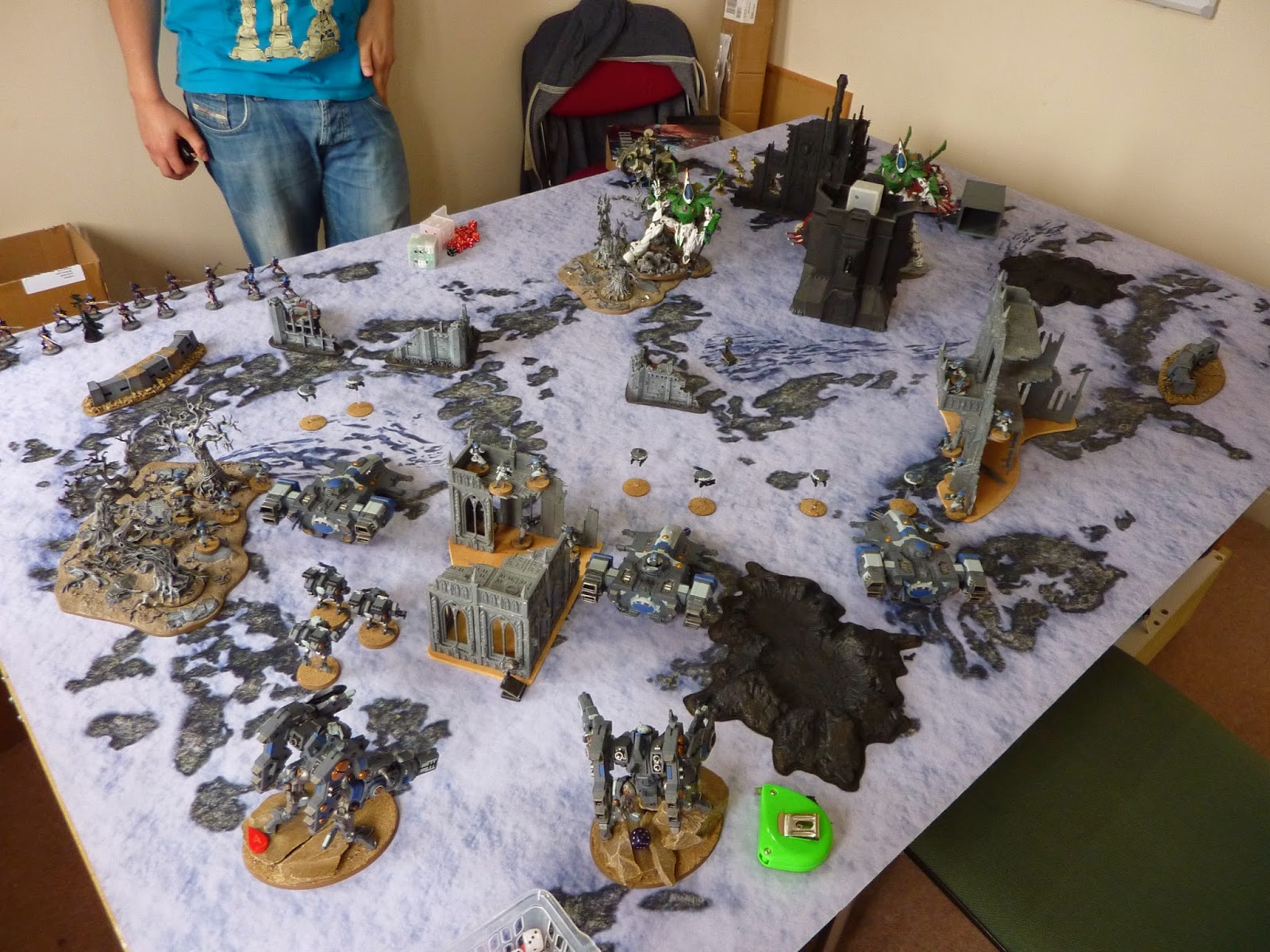 In the run up to Blog Wars Matt and I always try to get a few games in with the scenarios to ensure there's no final tweaks that are needed. Last Sunday we played through Emperor's Relic with my BW6 Tau list taking on Matt's combination of Eldar and Guard (I just can't call them Astra Militarum). Matt's list was something along the lines of:

Karandras
18 Guardians (with wave serpent but not in it)
5 Dire Avengers (in wave serpent)
Two wraithknights with heavy wraithcannons
2 Leman Russ Eradicators (I think, the ones with the plasma cannons)
Coteaz
Warrior Acolytes
10 Veterans 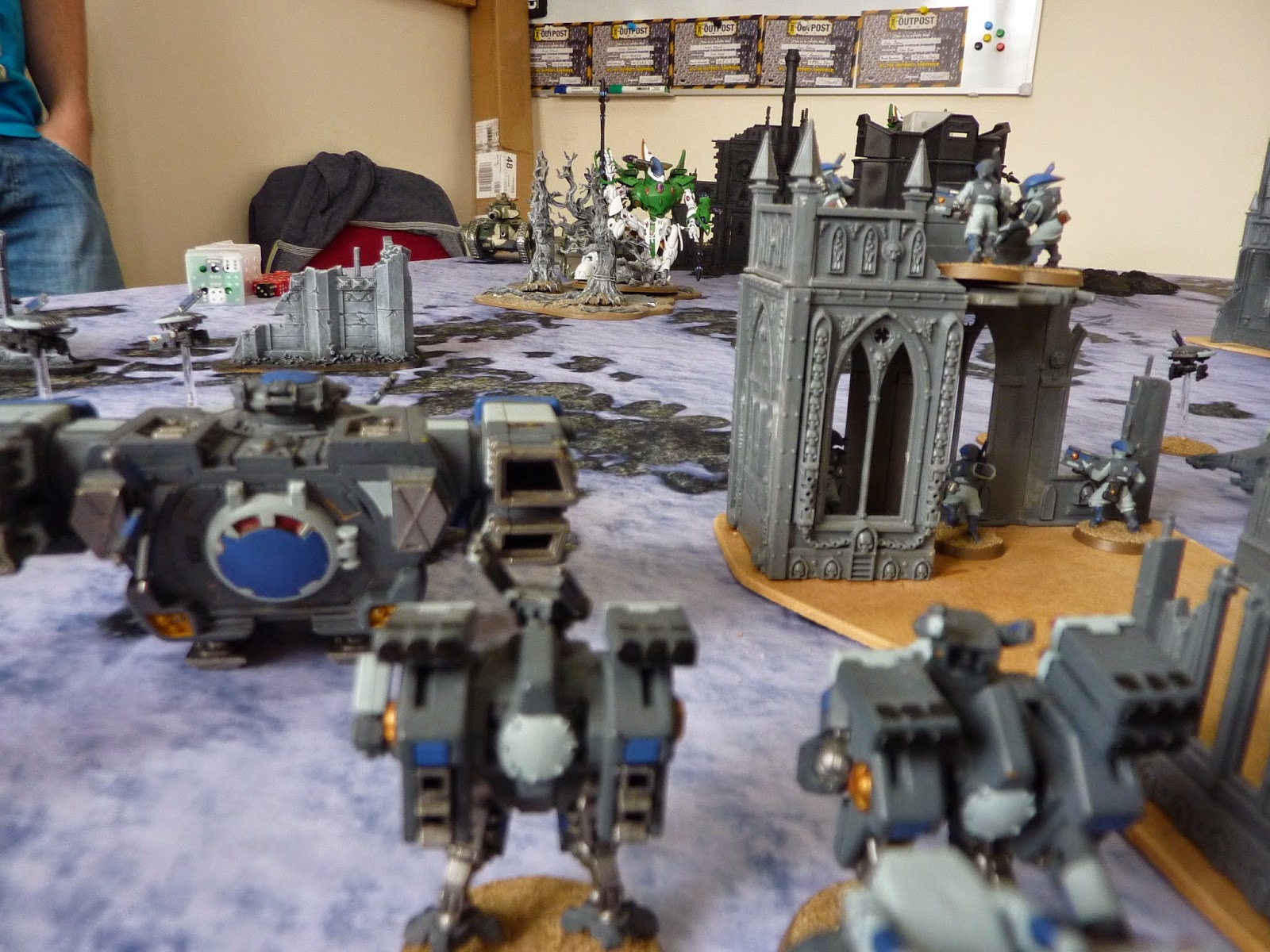 I got the first turn and made light work of one of the wraithknights with a combination of crisis missile team and riptides. That's a heck of a start! Meanwhile Karandras had infiltrated on my flank so I began to send my devilfish in his direction. Matt's first turn was focussed on taking out my pathfinders with two of the squads being killed off an the third reduced in number. 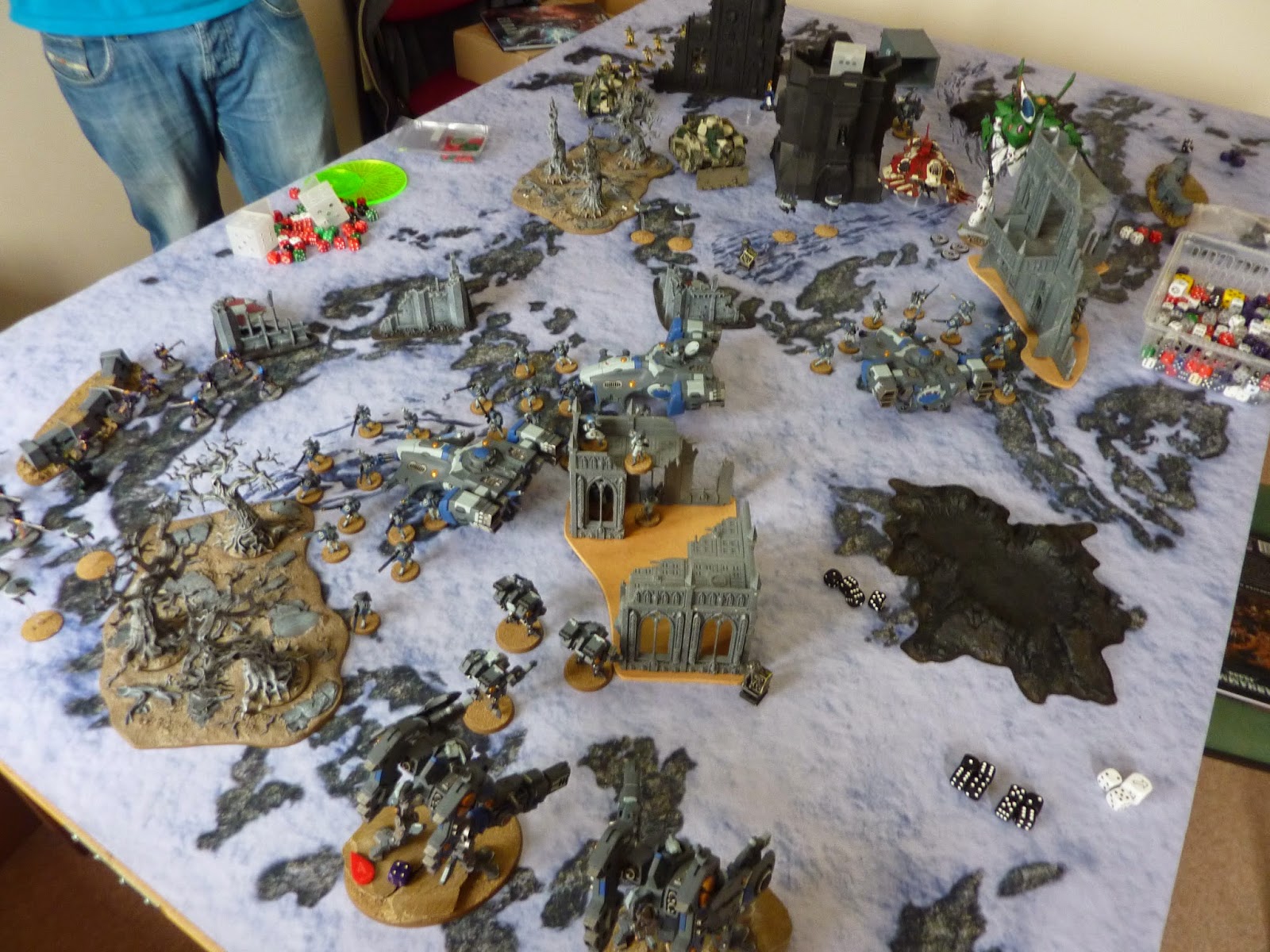 Shadowsun arrived at this point but couldn't risk deepstriking so close to the leman russes and opted to target the wave serpents. I rolled a hit which would've actually allowed me to hit the AM tanks but hindsight is always 20:20. Anyway, Shadowsun shot one of her fusion blasters at the empty wave serpent whilst the rest of her team focussed on the occupied one. The empty one passed its Jink save but the other blew up with fire from the rest of my army killing all but one of the dire avengers in the crater. Meanwhile the fire warriors piled out of their transports to hit Karandras and his guardians. Fortunately for me the warlock had failed his Conceal power so they'd only benefit from Karandras' stealth. This allowed me to wipe the entire squad out including Karandras giving me Slay the Warlord thanks to the Kroot who'd arrived behind them. In the meantime the rest of my army focussed on the wraithknights apart from one of the riptides who attempted to use his ordnance blast to down a leman russ but failed. This left the wraithknight alive and close to Shadowsun. 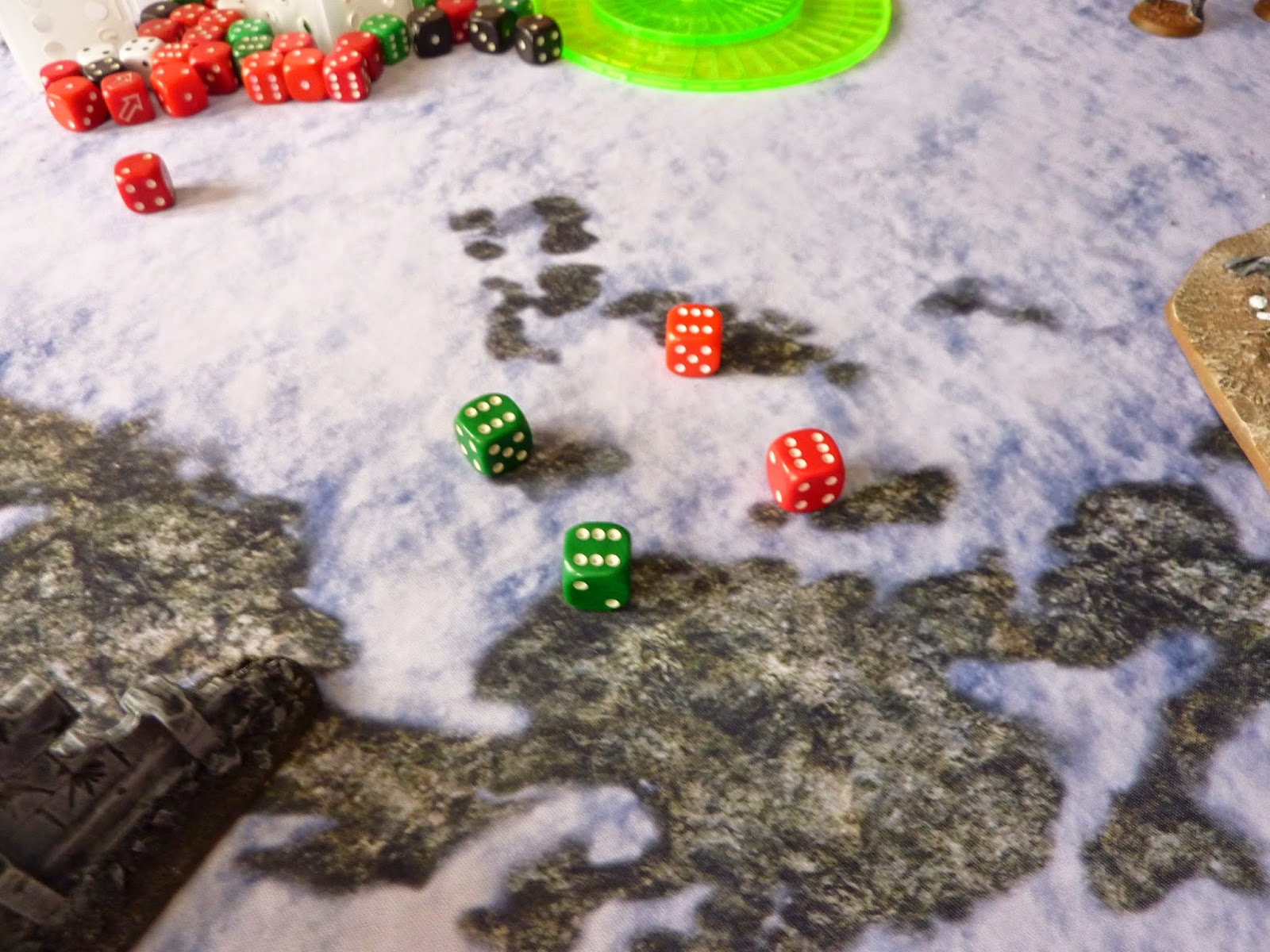 Matt began his second turn with Coteaz attempting to cast Prescience and Forewarning on the Leman Russes. Somehow he managed to double-six both rolls meaning not only did the powers fail but he also left Coteaz on a single wound! This was of little consolation to Shadowsun though who found herself smacked down by the wraithlord. She'd have been fine if she'd not be caught in a Sweeping Advance as on her own she'd have been able to use Our Weapons Are Useless (since the crisis suits had been killed). She was caught though giving Matt Slay the Warlord too. Her death certainly saved either the leman russes or wraithknight next turn. 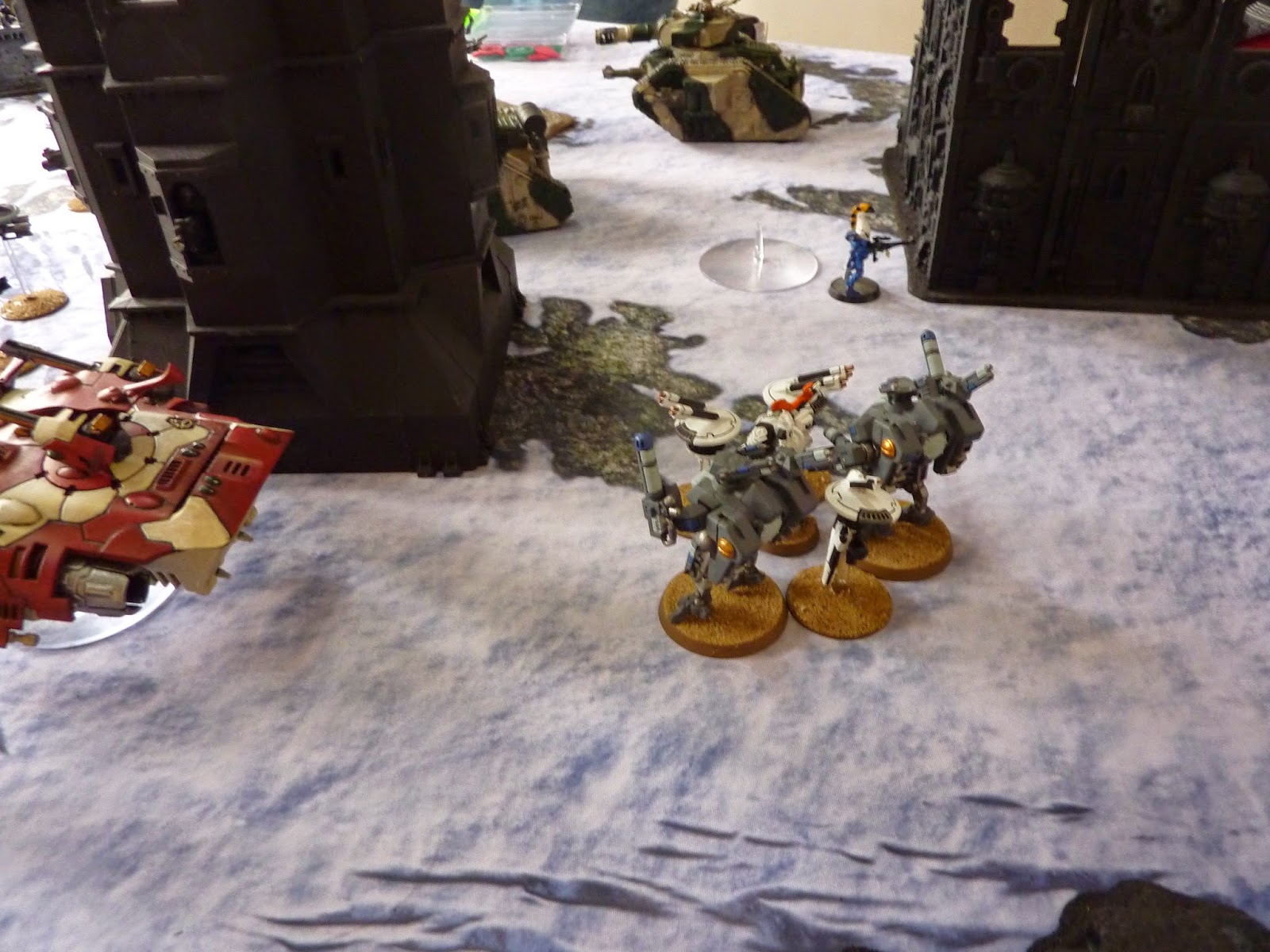 The remaining fire warriors hopped back in the transports to try and survive long enough to grab some objectives. More Kroot arrived but Coteaz informed them that he'd been expecting them and eight of the ten were gunned down as they walked on the field.

I eventually managed to kill off the other wraithknight but not before one of the riptides had bought it. I'd failed miserably on a couple of occasions to kill the tanks so they rolled in and opened up on the riptides. Matt realised at this point that he'd been forgetting to fire their lascannons which probably would've resulted in the death of the riptides a turn or two sooner. 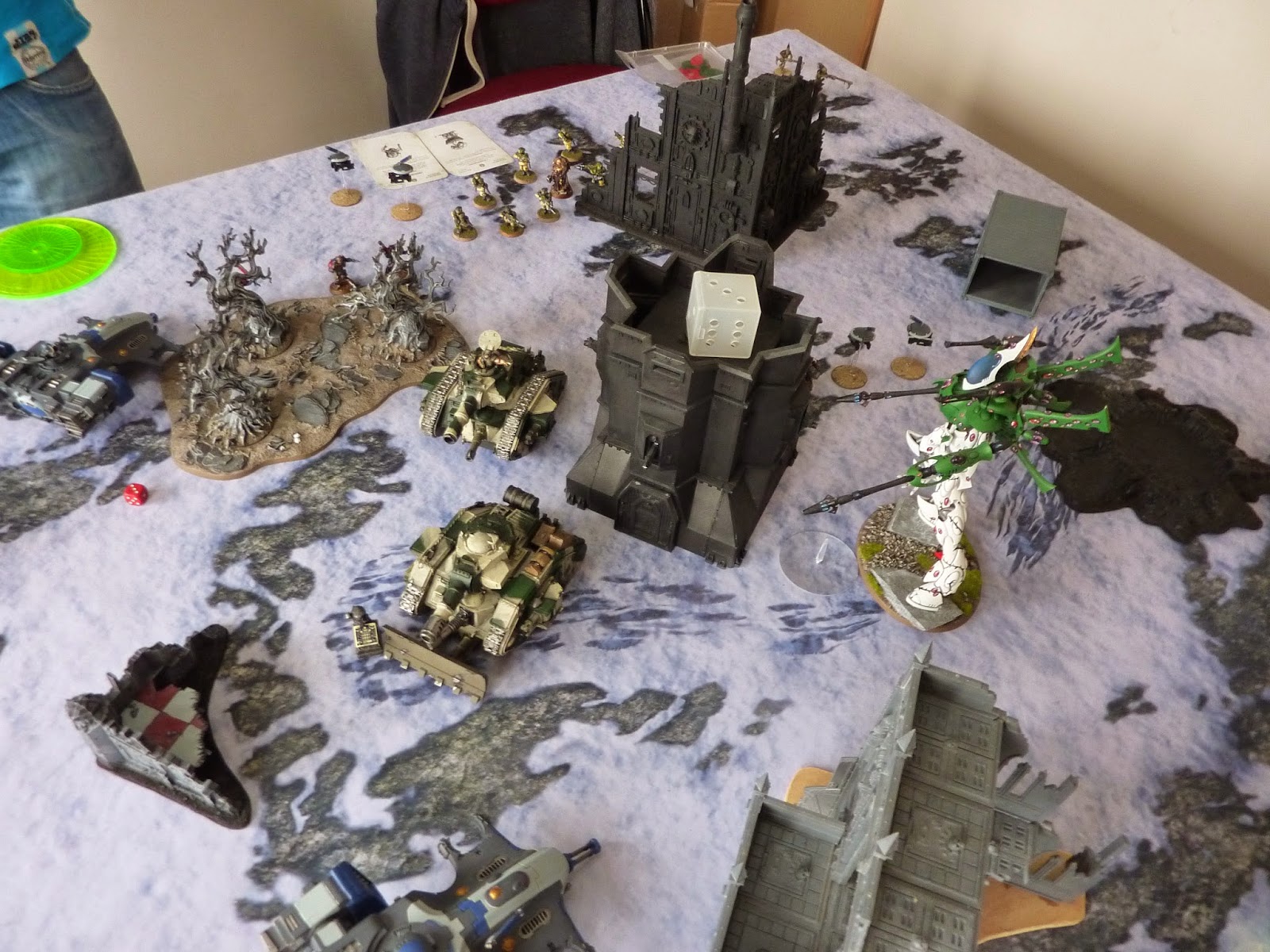 A combination of fire warriors and drones managed to finish off some acolytes and Coteaz who broke off to try and kill the Ethereal's squad. The game ended soon after at the top of T5 with me controlling my own objective whilst Matt's veterans held his. Neither of us could keep the central one. With all three secondaries I'd scored 8 of the possible 33 available VPs.

Conclusion
Had I focussed on the wraithknights on the second turn instead of worrying about Karandras I'd have probably saved Shadowsun and the game would've been over far sooner. Still the game felt pretty one-sided at the start with me killing a wraithknight straight off. Well at first it did anyway. With me exposing the fire warriors early I lacked anti-infantry firepower late on to deal with the veterans. The kroot were stupid to arrive in range of Coteaz but I simply forgot despite Matt having reminded me once that he had that rule. 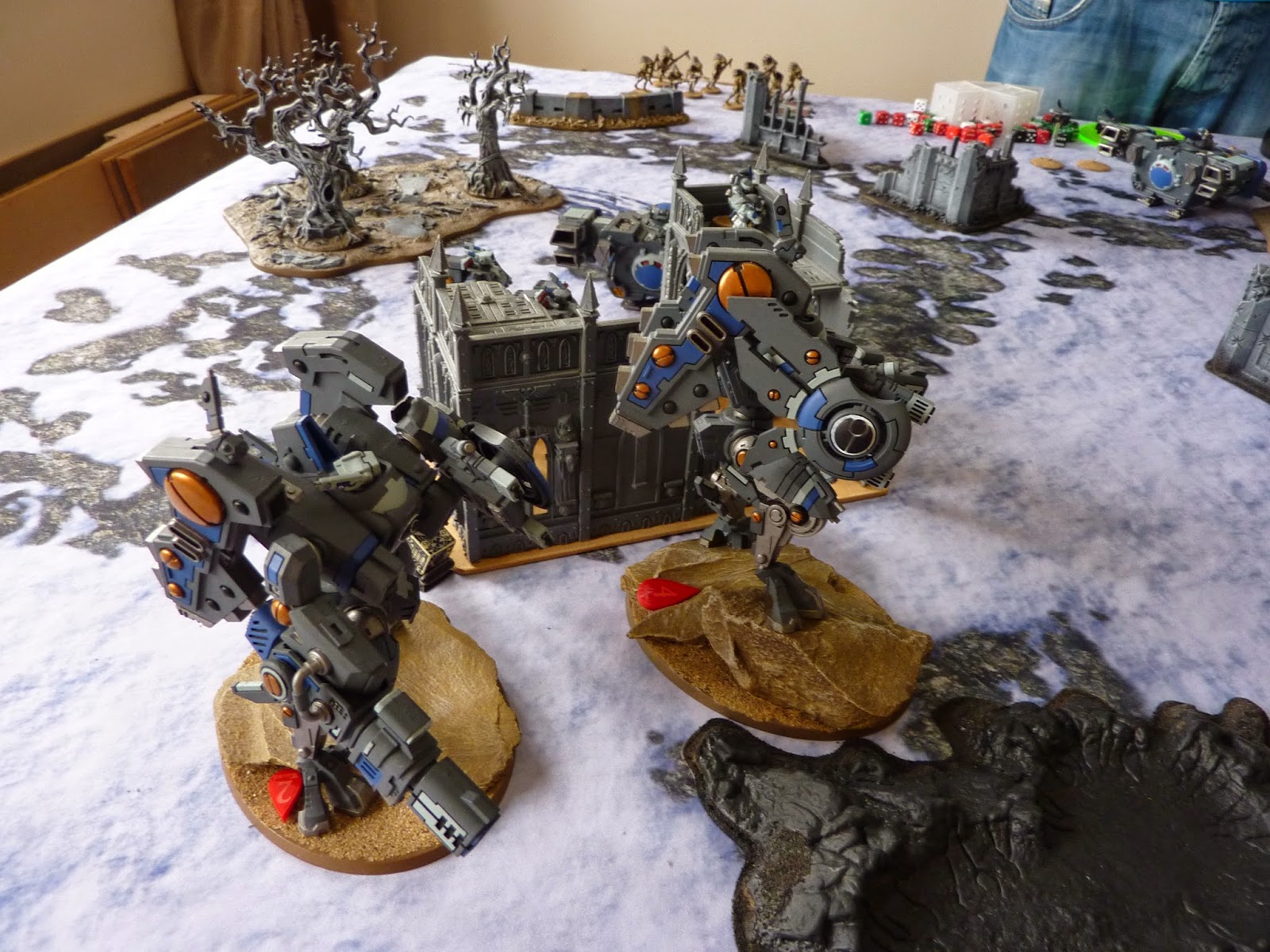 Still, it was great that the game ended up pretty close towards the end. Matt was in a position where he might've taken the central objective himself were it not for my drones getting lucky. Obviously I was pleased to win the game but the main thing to take away from this battle was how well this mission works. You've got to have some way of getting to your opponent's objective if you want to score well. Even though I killed off a good chunk of Matt's army I only scored 8/33 points. You've got to push for the objectives sooner to clear them or have some way of getting to them earlier to claim them. It's certainly an improvement on both Relic (which normally comes down to First Blood) and Emperor's Will (which usually involves holding your own objective and again comes down to First Blood). 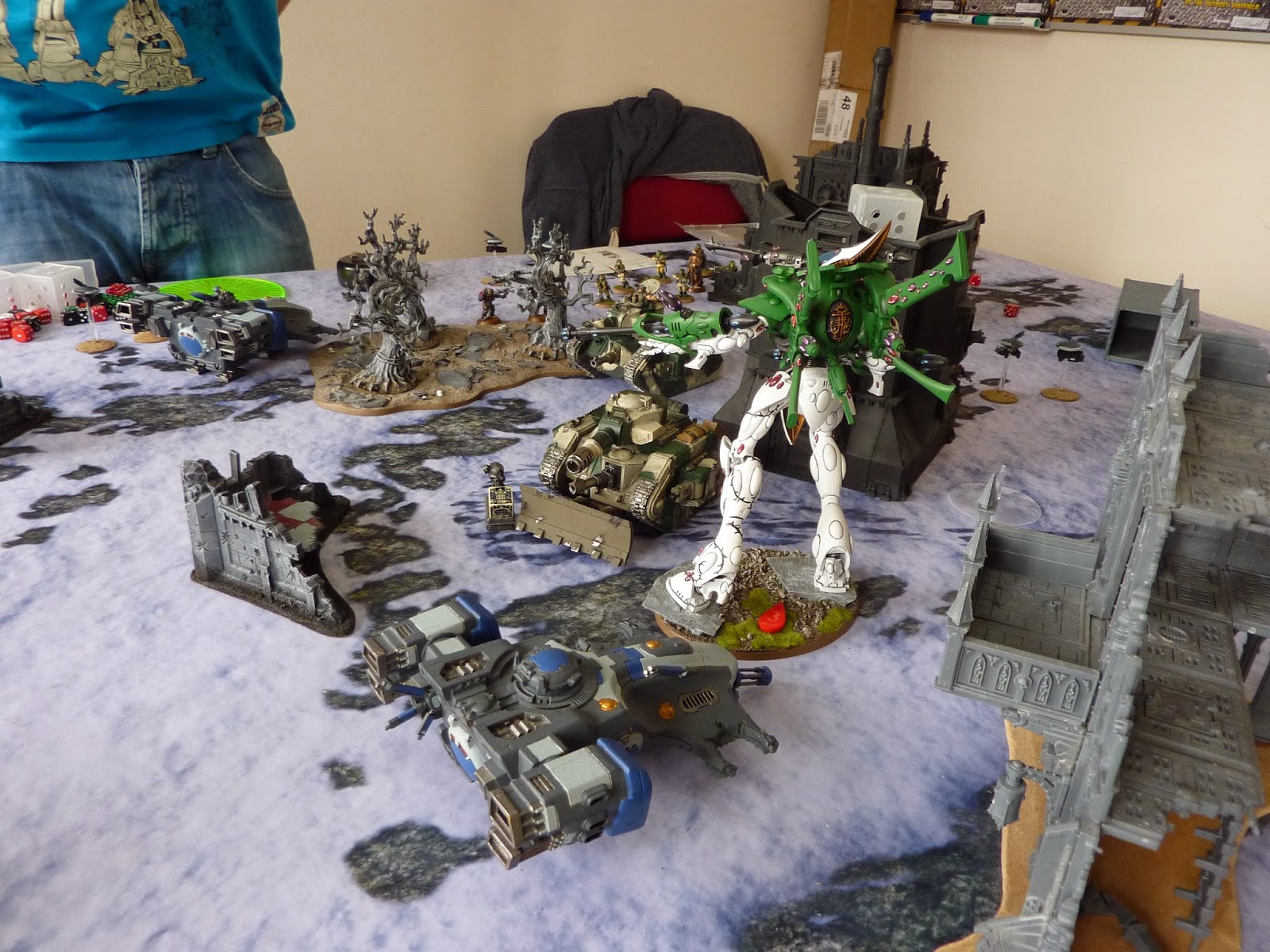 Having the objectives worth more points makes the secondaries fairly inconsequential. Sure you can both just hold on to your own objectives but then the winner will only be scoring 8 VPs. As you know I'm a big fan of quantifying victories. I don't like straight W/D/L but prefer to know just how significant a victory (or indeed loss) actually was.

We got three games in so there's another couple of reports to come. The next one involved a few big guys....
Posted by From The Fang at 17:00:00