As I've mentioned in previous posts, I don't like to cast judgement on any new units until I've had a game or two with or against it. Obviously you get a fair idea from reading the rules but often there are things that you haven't considered when considering the unit in a vacuum. Anyway, the unit in question for this battle report was the Imperial Knight. Since I haven't persuaded myself to buy one yet I was borrowing Jamie's (head over to his blog to read more about it). 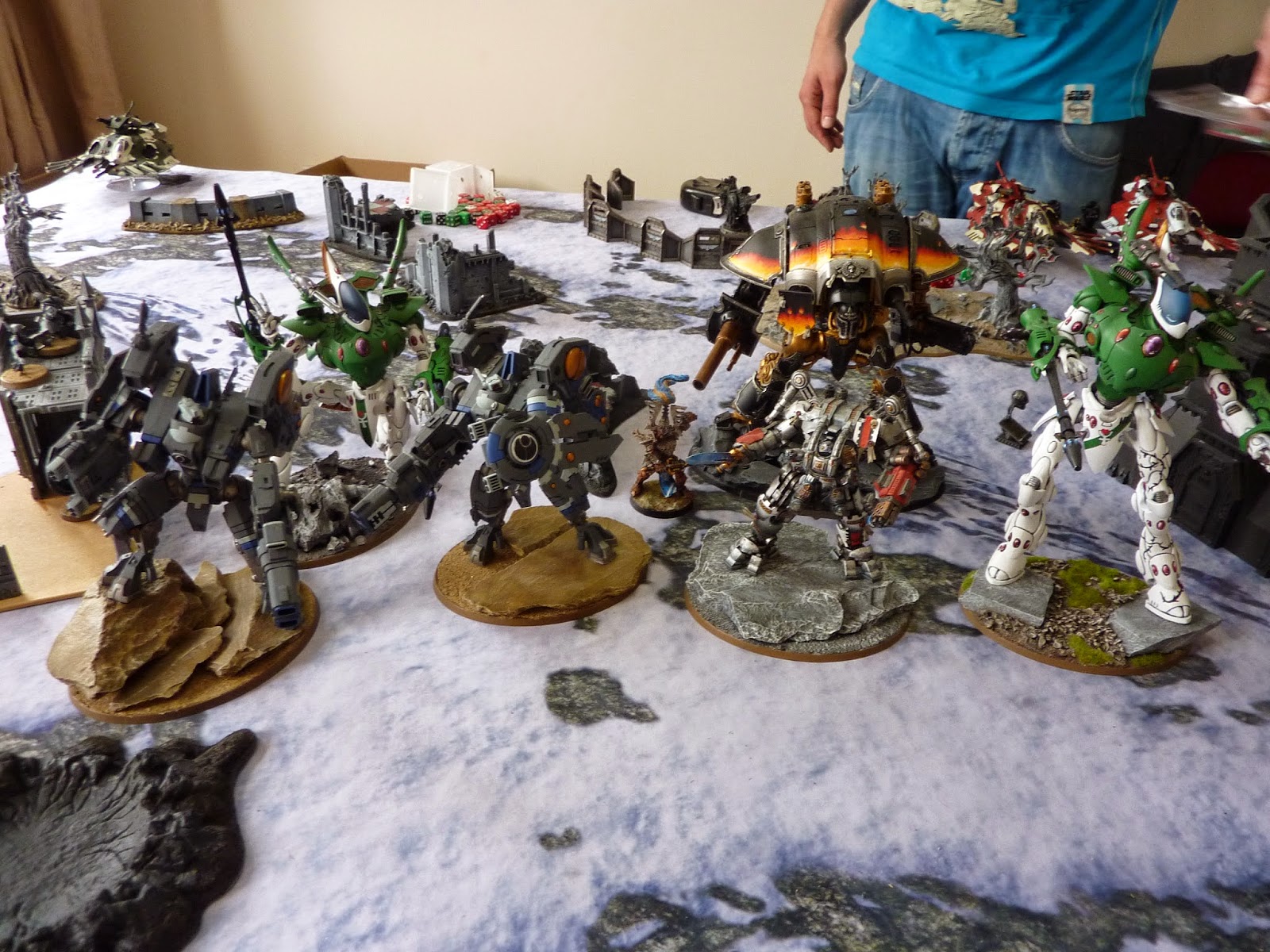 Whilst we want to test the Imperial Knight in tournament like conditions we couldn't resist the opportunity to field a ton of big units. Here's a group shot of the big guys in question (I quite like how Matt's wraithknights look like their posing for the photo!):


Anyway, my list was essentially the same as in Monday's batrep but with one less fire warrior unit and a few upgrades on the suits etc. Matt's list featured the same two wraithknights but this time they were joined by an avatar and a dreadknight along with some extra wave serpents and dark reapers. 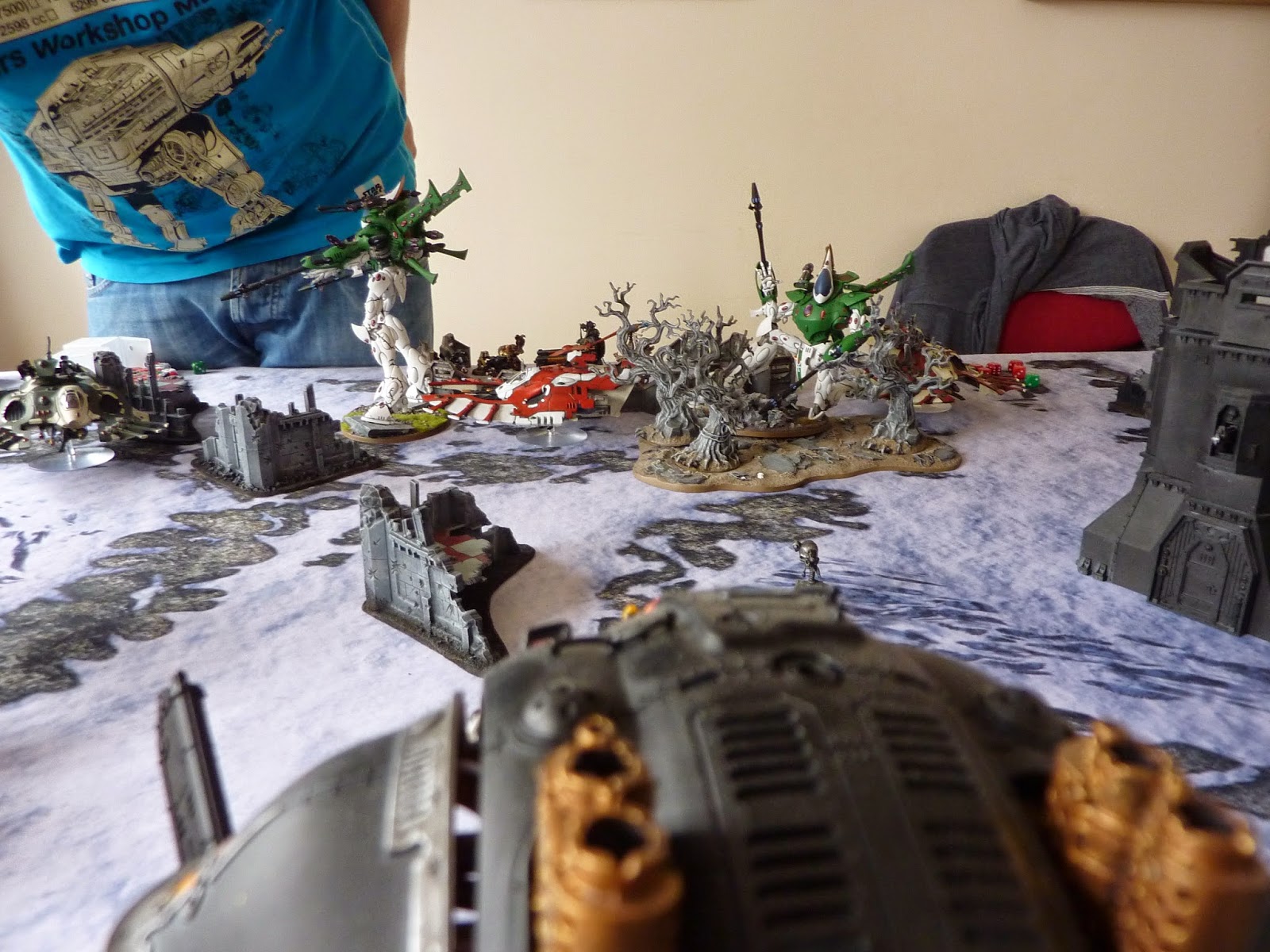 We'd be playing a 3 objective Crusade on Dawn of War. Matt would be taking the first turn but just in case he castled up his forces in the centre of the board. Of course with Coteaz involved I failed to seize. Matt's dreadknight advanced towards one of my riptides whilst incinerating some pathfinders on the way. The rest of the army focussed on the Imperial Knight stripping away half of it's hull points before it'd even moved. Elsewhere more pathfinders died but neither ran denying Matt First Blood. Thanks to some poor target prioritisation on my part I failed to get it either. I managed to wound both the dreadknight and one of the wraithknights but neither fell. All the Imperial Knight managed to achieve was a single wound on the wraithknight but he was advancing towards his foe hoping to get stuck into combat. 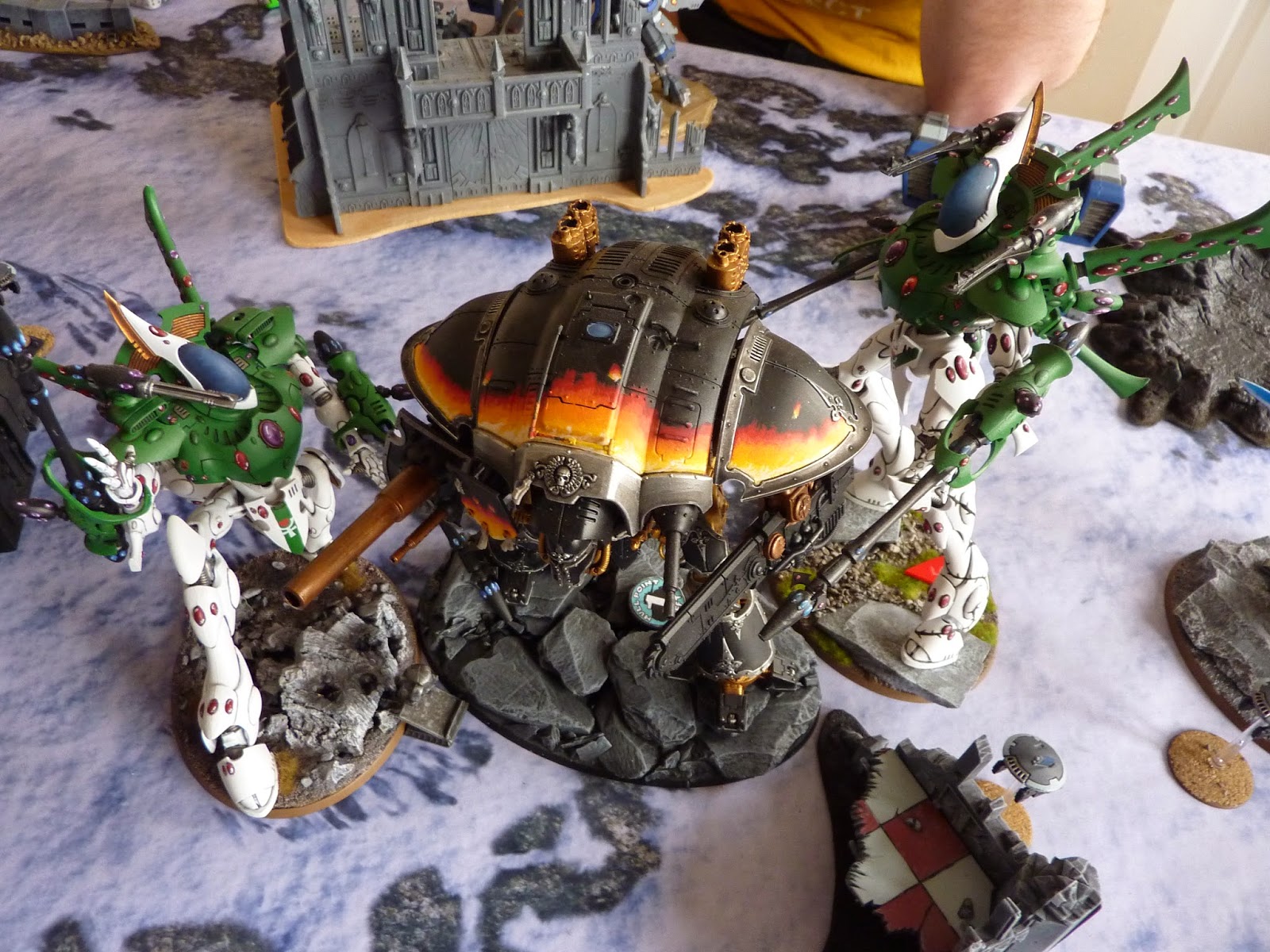 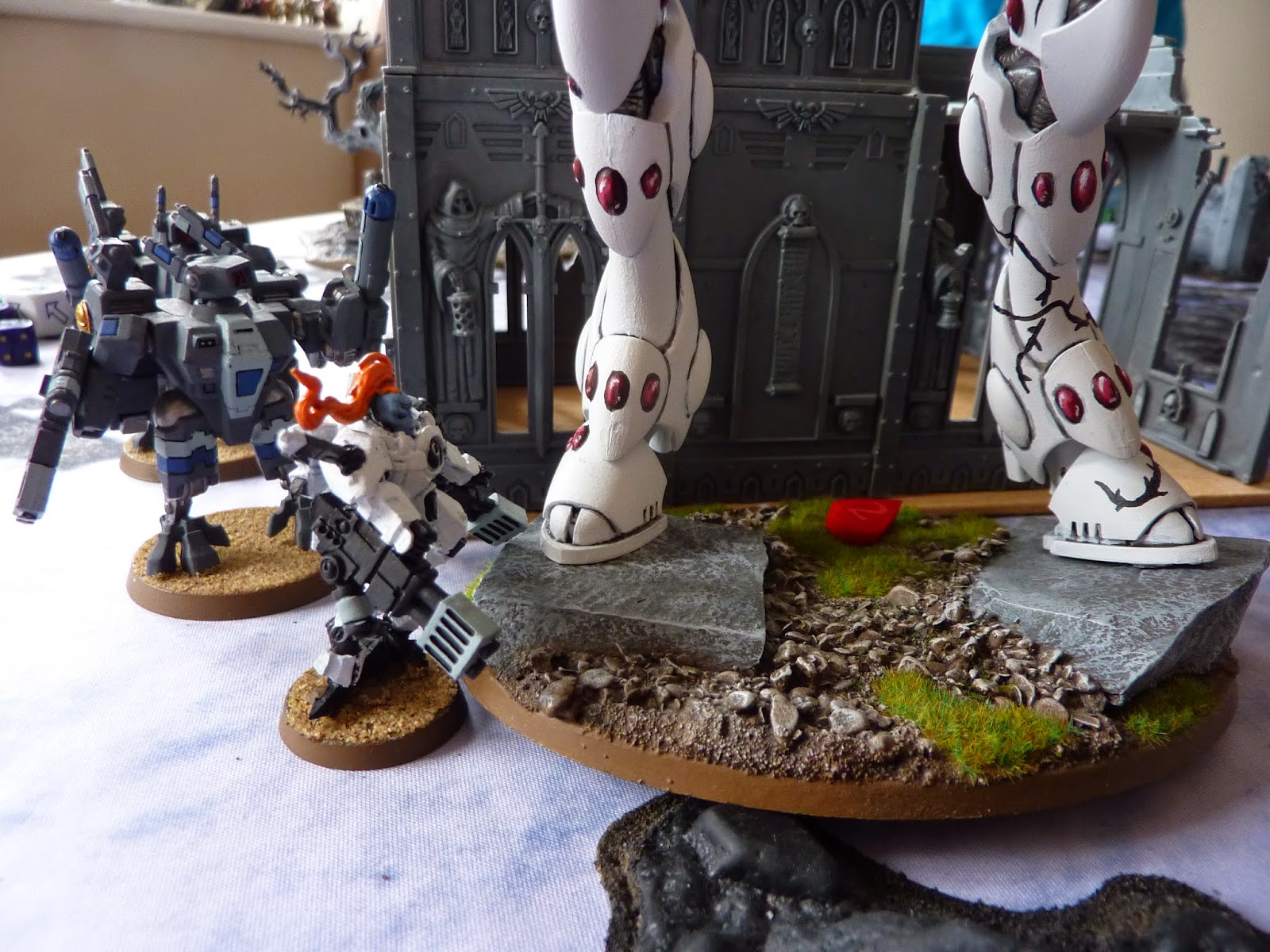 It wouldn't get much of an opportunity though. The wraithknights fired at it bringing it down to a single HP before charging in. One of them took the remaining HP with Hammer of Wrath and that was that. Bit of a damp squib but that's how it goes sometimes. The resultant explosion took a wound each from the wraithknights but it was hardly making it worth the 375pts! I managed to get some revenge by downing the dreadknight but one of my riptides followed shortly afterwards. At this point I was feeling very much on the back foot. The firepower from the avatar on the lascannon and all those wave serpents was simply too much for my Tau. Shadowsun and her team weren't even able to down a wraithknight when they arrived which didn't help matters. Especially not when it made her pay by killing her in combat (again!). 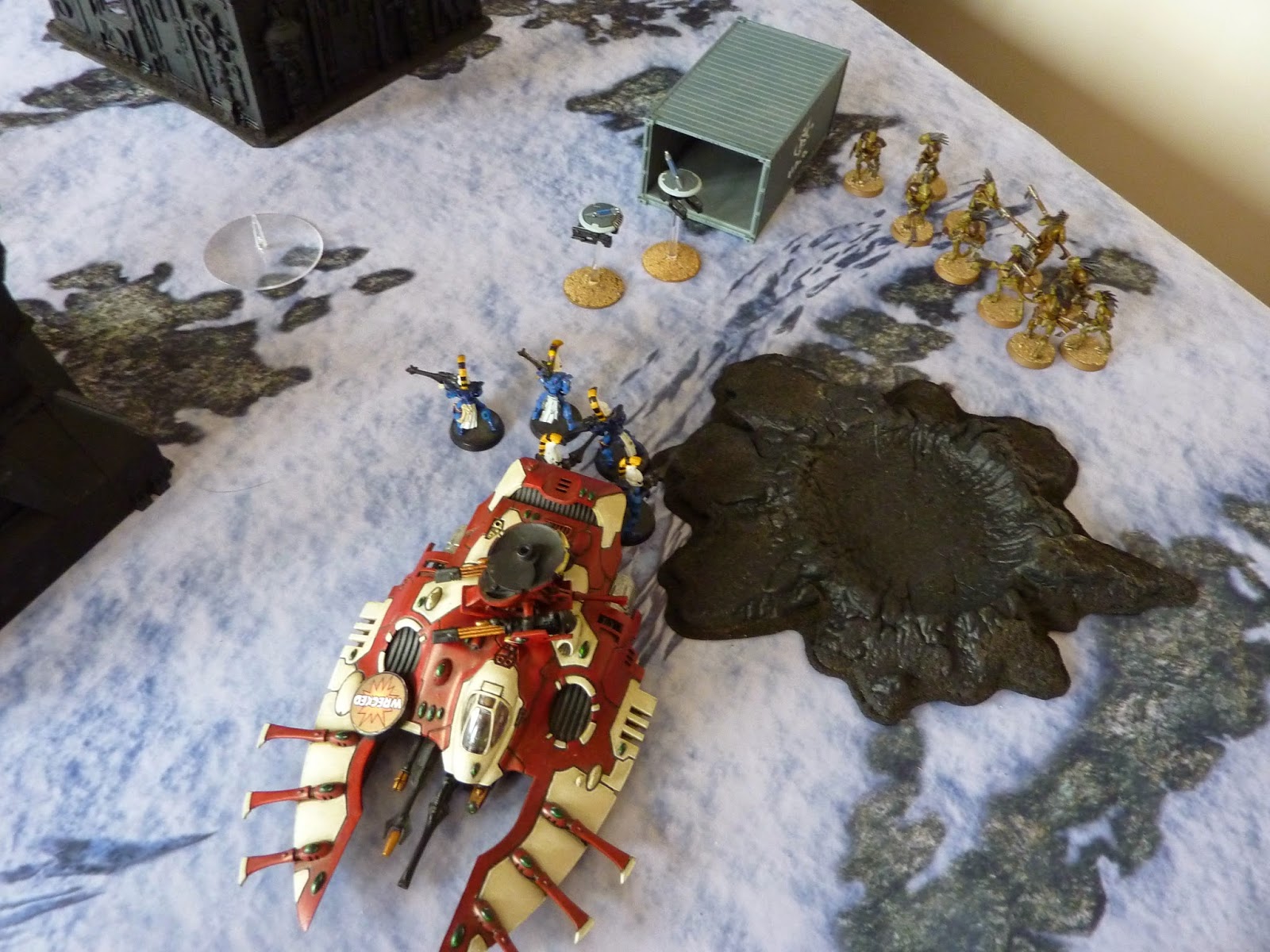 The other wraithknight had a couple of rounds of combat with my remaining riptide but once that fell I was all but defeated. There was a brief highlight for me though. A squad of outflanking kroot were able to down a wave serpent by glancing it to death with rear armour shots but it was too little too late. With both wraithknights free to smash what they liked the game was lost. I couldn't kill off Matt's troops and mine were soon gone. We played it through to the end and my inevitable tabling.

Conclusion
It's a shame to have lost this one. Before I saw Matt's army I felt pretty confident having managed to squeeze a knight into an already strong Tau list. Once I'd seen Matt's list though I knew I'd struggle, especially without First Turn. The result felt pretty much decided from the start which is a shame since one-sided games are rarely fun for either player.

The point of the game though was to test out the Imperial Knight. Despite what you might think (since they aren't permitted at BW7) I was really expecting much from it. Of course it's tough for some armies to kill but against others it'll die just as quick as most vehicles. Matt's list had a disgusting amount of high strength fire power. Those S10 shots from the wraithknights are perfect for bringing it down. Once in combat their I5 and S10 makes them probably the best way of downing one. It's a shame that one of them kicked in the shin (Hammer of Wrath) before it got to strike. I'd have loved to smash up a couple of wraithknights before it fell. 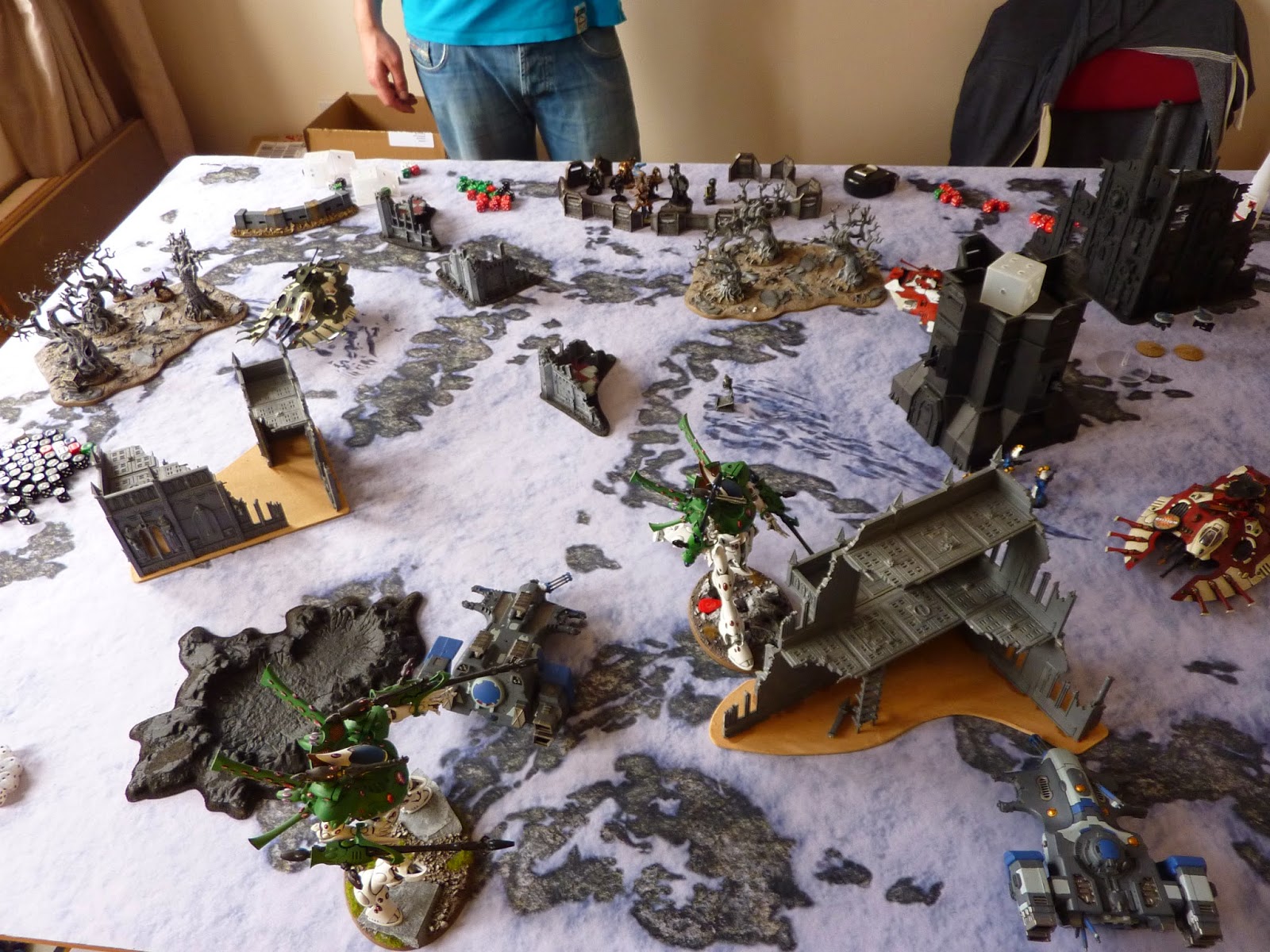 I initially thought that the Paladin was the better of the two variants since the rapid fire battle cannon would be great against massed MEQ infantry. I'm now leaning towards the Errant though. The 36" large blast melta seems far better now I think about it. I don't actually know what made me think the Paladin would be superior actually. With so many wave serpents around (and I'm sure a lot of Leman Russes after the AM book) having the melta makes it that much more potent. This is especially true when you consider it'll be those vehicles that create the biggest problem for both it and the army it fights alongside.

The Imperial Knight may have died pretty easily in this game but I can still envision it cutting swathes through various other armies. I suppose, like anything else, there'll be a rock-paper-scissors kind of thing. For some armies it'll be no problem and others it'll be their worse nightmare. I think the key is that, like any big model, it proves a huge distraction for your opponent. They can't simply ignore it which means the rest of your list gets a bit of a breather. Pack the list out with mech and your opponent's presumably limited anti-tank weaponry will be left with a choice. Kill the knight and spare the rest or vice versa.

Our last game of the day was a somewhat fluffier affair (to my relief). I'll be writing that up on Friday night so be sure to come back after the weekend to see how the Inquisition fare against an Ork horde led by a warboss with a dark secret.
Posted by From The Fang at 17:00:00