Here's a rundown of the final two games from last weekend's Battle Brothers event. Day one had seen us take 48 victory points having tabled two of our opponents and only missing out on tabling the third by three models. The first day's games had been a bit mismatched so we felt sure we'd now facing something nasty on day two. 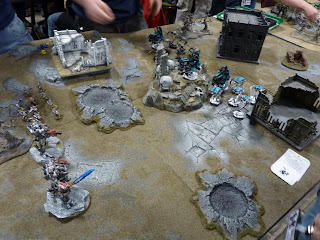 Our opponents for game four were Liam and Kyle who'd brought the now classic Necron combination of 4 flyers with 5 immortals each, 2 lots of 5 wraiths, 3 annihilation barges and a destroyer lord. We've said before that our army just can't deal with multiple flyers and Necrons are always a tough game thanks to the sheer volume of fire they can put out. This was going to be an uphill struggle.

We were already tense then, but our opponents didn't help. Whereas the first 3 games had been a great laugh this one was an awkwardly silent affair. I tried to strike up some conversation by saying sarcastically how fun it was to play Necrons and I was met with "that's nice for you". Things didn't get any better when we rolled for psychic powers and showed them our cards. Without reading them they tossed them casually back in our direction. Obviously our opponents felt supremely confident then. They seemed a little less so when they noticed we'd scored more VPs than them up until now. Our attempts to engage them in banter later in the game failed miserably too so we gave up.

Anyway, we'd be playing Relic on Hammer and Anvil. This played into our hands somewhat as it meant that we wouldn't be spread to thin trying to control objectives and Purge the Alien wouldn't have been much fun against that list. Add in the long range deployment allowing us to keep them at maximum range during turn one and we'd at least got a hope but still weren't confident.

We won the roll off but let our opponents go first. Our opponents deployed everything up to the edge of their deployment zone. We deployed our army in such a way that they'd only fire snap shots on turn one but we'd still have all of the strike squad in range should they take the bait and move forwards. Unsurprisingly they advanced at full pelt but were unable to do any damage to us with their snap fire. We advanced the dreadknights forward with one trying to charge a barge and the other one of the wraith squads. The strike squad got everything in range of the other wraiths. Our drop pod slammed down behind their lines with the rune priest splitting off to use Jaws and the squad lining up to shoot the other wraiths from the back.

Given the frosty attitude of our opponents and the list they'd brought we felt no guilt when Jaws managed to kill two wraiths and the destroyer lord (who failed to get back up). First shot of the game and we'd already taken 2 VPs which are crucial in The Relic. The grey hunters weren't as lucky with the wraiths passing all their 3+ saves. We probably should've tried to melta a barge instead. The strike squad managed to cut down another wraith from the lord's squad though. Both dreadknights failed their charges on the annihilation barge and wraiths which might've been fatal!

The dreadknights weathered a huge amount of fire and both came out alive. The wraiths charged the one without a sword. They lose one to overwatch and a further two in combat but couldn't down the dreadknight. The remaining wraiths from the lord's squad charged the rune priest who'd split from his hunters. Thanks to the 2+ runic armour he weathered their charge but they also passed their saves. The immortals teleported in from the two flyers which arrived this turn and cut the grey hunters down to 3 men from 9. 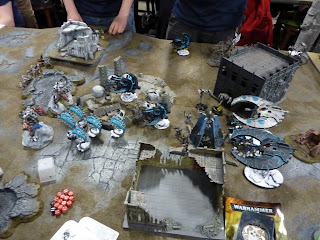 The wolf priest arrived from reserve and his squad managed to wipe out 5 immortals with their fire. The remaining grey hunters from the priest's pack managed to hit a barge on rear armour with their melta but could only glance! The rune priest still held on in combat but suffered a wound. The wraiths once again passed their saves. The dreadknight was having a similar problem with his wraiths who just wouldn't die. The sword bearing knight cut down an annihilation barge though.

The remaining two flyers appeared and brought down the sword dreadknight. The barges killed a couple of grey knights. The strike squad attempted to down a flyer but despite hitting with several S7 and S5 shots they could only glance once.

The wraiths eventually finished off the rune priest but their triumph was short lived as the wolf priest's squad cut them down. The grey hunters again tried to kill the barge with melta but despite penetrating the armour the Jink save prevented any damage being done.

With the end of the game looming we moved everything we had towards the central objective. Our opponents brought back their flyers who'd zoomed off the board earlier and dropped an immortal squad directly on the relic. They kept another squad a little further back though with the idea being to keep them in cover. For some reason they deployed the final remaining squad miles from the objective. The combination of fire was too much for the remaining dreadknight who fluffed enough 2+ saves to be removed. 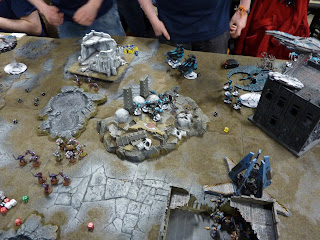 At the end of their turn 5 they'd got a single squad on the objective. As it stood we'd lose the game 3-2. If the game went to a 6th turn the weight of fire would be far too much for us. Our only hope of victory was to try and clear the immortals from the objective and then we'd at least win 2-0 if we couldn't get a squad close enough to claim.

The strike squad moved up into a position to try and charge the immortals but this wasn't necessary as the wolf priest's squad killed all 5 off with their Preferred Enemy fire. The strike squad was then able to run onto the objective and claim it. There was some contention about what sort of cover save their immortals should get but realistically the strike squad would've wiped them out in combat anyway so I don't think it was an issue. With Slay the Warlord and First Blood plus the objective we'd taken 5-0 from a pretty miserable game.

Game 5 - Titanic Fenrisians vs. CSM/Daemons
We'd been saying all weekend that we didn't want to face Heldrakes but luckily our next opponents Dan and Rich only had one. Their list consisted of a lord of change, 6 screamers, 3 flamers, a blob of horrors, a heldrake and two thousand sons squads with one joined by a terminator armoured sorcerer. We'd be playing Emperor's Will on Vanguard. 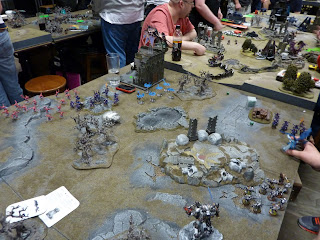 Once again we didn't get to first and we were made to suffer for it. The lord of change, thousand sons and flamers combined their various hellfire rounds, bolts of change and flames to kill off the entire strike squad leaving Coteaz feeling decidedly lonely and giving them First Blood. We brought down our drop pod and used the grey hunters to down the lord of change whilst the rune priest attempted a Jaws on the Thousand Sons but failed his psychic test. With the lord of change down he was in line for a dreadknight charge. The other dreadknight lined up to charge the screamers whilst Coteaz did the same with the Thousand Sons.

One dreadknight needed a 5 to charge the screamers and rolled a double 1, Coteaz needed 7 and rolled 5 (or similar) but luckily the dreadknight got in on the lord of change. The dreadknight inflicted 4 wounds on the greater daemon who failed two but with the activation of the greatsword he didn't get his FNP (thanks to the FAQ) and was slain. Even so, with the failure to charge the Thousand Sons and Screamers we still had a battle on our hands.

The heldrake arrived and with help from the flamers cut down the grey hunters and the screamers charged one of the dreadknights. In response the rune priest managed to jaws all three flamers whilst Coteaz and the dreadknight charged into the thousand sons and finished them off over a couple of turns. The other dreadknight was eventually victorious over the screamers. The Heldrake incinerated some recently arrived acolytes after vector striking a dreadknight down. 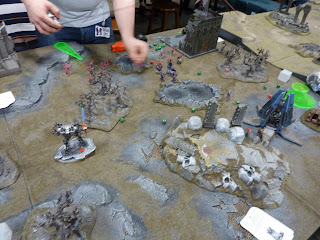 Our wolf priest arrived and with some unlucky rolls from our opponents his squad was able to gun down a handful of Thousand Sons. We moved on some more acolytes in a position where the Heldrake would need to hover to kill them and positioned our remaining dreadknight ready to pounce if it took the bait. Sadly it didn't and left the board instead. The horrors fired at the dreadknight but it survived with a single wound.

We charged the horrors with our dreadknight to pull the from the objective. The rune priest got another Jaws off against the Thousand Sons and was able to kill both the Sorcerer and Aspiring Sorcerer almost certainly saving his own life. This left a couple of thousand sons to claim their objective. Our opponents quite rightly realised they couldn't kill both of our acolyte squads with the heldrake so they decided to put everything they had on the rune priest hoping to stop him contesting. Sadly for them I was on form with my 2+ saves and he survived. Coteaz was still wandering around at this point but too far away to do much but Misfortune stuff and hope he didn't kill himself again. The rune priest charged into the thousand sons but neither was able to kill the other. With the horrors about to be finished off and the Heldrake unable to kill both acolyte squads our opponents conceded giving us 5-2. 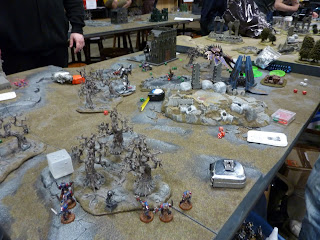 It wasn't until the drive home that we realised we could've been using the rune priest's 4+ cancel to try to stop the horrors firing! Might've saved our wolf priest.

Apologies to our opponents if some of these details are wrong, feel free to correct me. The reason is I'm writing this on Tuesday and didn't take anywhere near enough pictures to remember everything!

Conclusion
The games on day two were very tough. Game 4 because of the list and game 5 because of the players. Our final game was easily one of the most enjoyable games of 40K I've had. It was too close to call right up until the end and a great laugh throughout. We were pretty unlucky early on when we failed some crucial charges but more than made up for it with dirty Jaws.

Speaking of which, we reckon the Rune Priest was probably the best unit in our army over the weekend. Game two he killed off a Tervigon and Carnifex with Jaws, game three he helped destroy the vindicator with lightning, game four he used Jaws to claim 2 VPs and then held the wraiths up for long enough to keep other things alive and in the final game his Jaws followed by contesting the final objective certainly won the game for us. There'll be many a saga written about him!

Once again, thanks to our opponents for putting up with some cheesy use of Jaws and punishing dreadknight shenanigans. Even without fave game votes we'd have finished 3rd but, despite what others may think, we felt we'd earned the win after two really challenging games. We were by no means faultless but I'm pretty proud of how well we played nonetheless.

Not sure we'll be going to the June one as it's a long day for a Sunday but we'll certainly be at the next weekender to defend our title!
Posted by From The Fang at 17:00:00