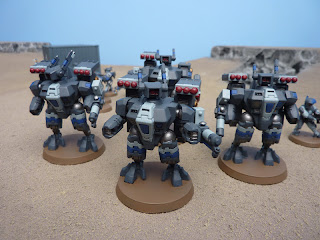 Apologies for the break in the Tau posts. I've actually been too busy painting and playing to blog much recently! Anyway, coming back to looking at the different Tau units, I've only got a few left to cover. Today I'm going to talk about the ever-flexible crisis suit team.

On the face of it very little has changed with crisis teams. They still have pretty much the same stats and can field the same array of weapons. They're also still jet pack infantry meaning their famous Jump-Shoot-Jump (JSJ) manoeuvre is still possible. However, there are actually several significant changes to the way they operate.

Points Cost and Standard Kit
Their base cost is now 3pts cheaper and included in this are a multitracker and blacksun filter. This makes the standard model around 11pts cheaper compared to the old codex values. The key thing is that it frees up some space for more weapons or alternative support systems. The weapons themselves are on average slightly more expensive so a lot of the combinations are comparable in cost to their old codex version. For example, I used to run twin-linked missile pod and flamer suits which still costs the same. Of course they can now ignore Night Fighting and can fire both weapons if the opportunity presents itself. It's worth noting though that contrary to popular belief the multi-tracker doesn't allow crisis suits to fire both weapons during Overwatch or Supporting Fire as it specifies "shooting phase".

Following the most recent FAQ, crisis suit weapons can be taken in any combination. In the past if you took two of the same weapon it counted as a single, twin-linked, weapon. Now you can take them as two separate weapons if you're prepared to pay the additional cost. For example, two missile pods cost 1.5x the amount that a twin-linked pod costs. This creates some interesting combinations. You can also potentially take three different weapons, but only fire two, increasing the flexibility of the suits.

Jump-Shoot-Jump
The JSJ manoeuvre is key to successful use of crisis suits. Any Tau veteran or anyone who's played them on a regular basis will know how frustrating it can be to try and pin them down. For those of you who might not be familiar with it, JSJ allows a crisis suit to sit behind cover, jump out in the movement phase, shoot with clear line of sight and then hide again in the assault phase. Bear in mind area terrain will be dangerous but otherwise it's a great tactic for keeping your suits alive. The other way of using it is by taking advantage of pre-measuring. By ensuring you are more than 18" from a normal unit you can protect yourself from combat, meltaguns and rapid fire. Sit just at your maximum range and then hope for a decent roll on your thrust move to keep you safe.

Bear in mind that the thrust is random therefore it's worth moving the minimum distance to get the shot so that you don't get left stranded if you fluff the 2D6 roll. Ultimately, using the JSJ move successfully means you can prevent combat a lot of the time. This means you need less in the way of defensive equipment.

Ranged Weapons
Flamer - same as the marine equivalent, good for anti-horde especially with Stealth being popular lately
Burst cannon - now 4 shots so suits can be made to put out a lot of fire, doesn't do anything other units can't though
Airbursting frag. projector - potential for sniping models and good anti-horde
Cyclic ion blaster - blast on overcharge could be good against light vehicles tightly packed but limited otherwise
Fusion blaster - 18" range meltagun, what's not to love?
Missile pod - long range means it's easier to keep suits safe, great for dealing with light armour
Plasma rifle - S6 but doesn't get hot. Brilliant for dealing with MEQ or TEQ 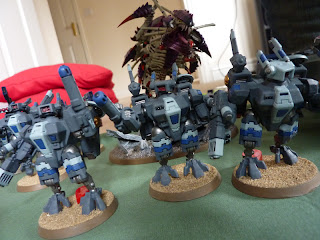 Support Systems
Advanced targeting system - reasonable choice to spend some left over points but wastes a slot
Counterfire defence system - waste of a slot considering it's only one weapon
Early warning override - depending on weaponry could be deadly but better on broadsides/riptides
Positional relay - very situational and only really useful on your opponent's board edge
Target lock - handy for commanders/shas'vre to kill two things at once potentially
Vectored retro-thrusters - fleet isn't necessary but nice to have but Hit & Run could be brilliant if you can pass an initiative test
Drone controller - mainly useful for commanders with marker drones, otherwise a bit unnecessary
Stimulant injector - not bad for a commander or used in combination with iridium armour as a "tank"
Velocity tracker - expensive for what it does and unlikely to be much use on a normal crisis team
Shield generator - pricey and there are probably better ways to spend the points

Signature Systems
Neuroweb system jammer - throw one on a commander if you have points spare but 12" range is too close
Onager gauntlet - nasty surprise for a vehicle or daemon prince but only if you have points spare
Failsafe detonator - really? nice to see it stayed in the book but don't see the point
Repulsor impact field - not really worth bothering with as you want to avoid combat if you can
Command and control node - on a dedicated model it could be useful but preventing a suit from firing isn't good
Puretide engram neurochip - tank hunter and monster hunter are useful but otherwise limited to a single model
Multi-spectrum sensor suite - ignores cover could be great but again, not firing is a big drawback
XV8-02 crisis 'iridium' battlesuit - 2+ and T5 on a commander, yes please

Loadouts
There's a disgusting number of possible combinations of weapon and support systems for the crisis suits. To even attempt to list them all would be ridiculous. However, below are a few examples to hopefully get you thinking about how you'd like to use your suits. Sorry I haven't come up with cool names like Helios or Deathrain but frankly I'm not that creative!

Missile Spam
Two shas'ui with pod and twin-pod and then a shas'vre with twin-pod and PE chip. Decent anti-armour unit. Chip gives them tank hunters meaning re-rolls to pen to compensate for S7 against AV12/13. Should kill a 3 HP vehicle a turn, with marker support it's almost guaranteed. Not quite as effective as HYMP broadsides but more manoeuvrable.

Dakka-Dakka
Twin-linked burst cannon and burst cannon. Each suit should score 5 S5 hits per turn. Great against infantry but as I've said about they're not doing anything that the rest of the army can't. Better to use piranhas for this role and cheaper too. 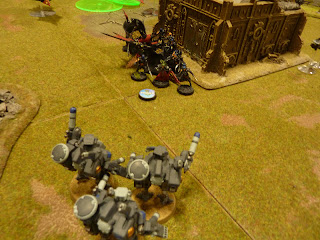 Anti-Deathstar
Twin-linked fusion blaster and plasma rifle. A full squad of three can put out 9 low AP shots that with marker support should deal with terminators and the like easily. Great for dropping into packs of vehicles. Throw in a commander with puretide and target lock and they can have a field day. You want them to deep strike but it's a lot of points to put into reserve.


Dedicated Supertank
One shas'vre in a unit could be given an iridium suit, FNP and C&C node for 87pts. Pretty tricky to shift with 88% chance of making its save. No weapons though and could be tricky to ensure it's always this model making the saves for a squad.

Crowd Control
One suit with AFP & twin-linked flamer, two suits with twin-linked flamer and flamer. Disgustingly good at clearing out massed troops/scoring units from behind cover. Pretty cheap at 121pts for the whole squad too. Major downside is that they'll need to be in close range to be effective meaning there's a big risk of reprisal.

Conclusion
Crisis teams are incredibly flexible and with the relatively reasonably priced 3-man boxed set available they're worth investing in. How you equip them will always be dictated by the style of cadre you want to run. Magnetisation is probably a good idea here as I sorely wish I'd done.

I'm not saying any of the loadouts I've suggested are perfect but I think it's important to try and avoid sticking with the same stuff we used in the old book. The loadouts I've given are deliberately very simplistic. In practice you'd want more flexibility from your suits.

What loadouts are you guys running at the moment or what have you played against that really hurt your army?
Posted by From The Fang at 22:29:00