Here's the first three games from our weekend at Warhammer World. I posted our list up yesterday for those who are interested. 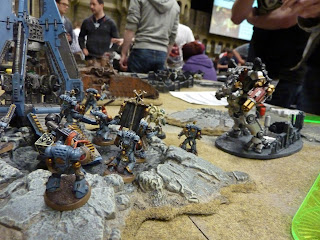 Our opponents, Chris and Elliot, were also fielding a similarly equipped dreadknight (no sword) supported by 5 GK terminators with a grand master, 5 DA scouts behind a quad gun aegis, 5 DW terminators and 5 DW knights with Belial. The GK terminators wouldn't do our dreadknights any favours if we got too close thanks to psyk-out grenades and the deathwing knights would be no picnic either as they'd be likely to "Smite" a dreadknight down.

We were playing Crusade (5) on Hammer and Anvil. Our opponents won the first turn and deployed with terminators on each side and the scouts within the aegis line in the back corner. Belial and the DW knights would be deepstriking. We deployed with our two dreadknights either side of our strike squad hoping they'd jump the dreadknight far enough for us to get in combat and bring it down turn one. They didn't take the bait of course.

Belial and co. dropped in behind our lines on an objective. With Coteaz having rolled the Misfortune power we were pleased when they landed in his line of sight. Sadly they triggered a booby trapped objective and decided to run to get out of the blast range meaning they were now totally obscured by a building. Instead Coteaz was able to misfortune the GK terminators and with Prescience his strike squad was able to force 17 saves with re-rolls. They failed 7 killing all but a single terminator and taking the grand master out for First Blood. My drop pod came down and through total fluke and support from a heavy incinerator the hunters managed to kill 4 DW terminators! Needless to say we felt like utter bastards already having caused so much pain so early. 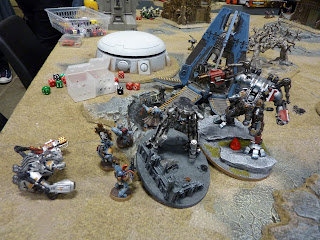 We were keeping Belial and co. at a distance but the remaining terminator and dreadknight charged into combat with my Space Wolves. They killed 4-5 grey hunters between them but thanks to denying a challenge from the dreadknight I was able to spare my rune priest. The grey hunters killed off the terminator in return but were unable to hurt the dreadknight. Luckily one of our own dreadknights was in the vicinity so we managed to get some knight on knight action. Ours managed to get a single wound through and instant deathed theirs. In response theirs also got a single wound through but rolled an 11 to activate the force weapon. Gutted.

From then on we were able to incinerate the scouts with the other dreadknight and then the wolf priest arrived to kill off the last terminator before he and his squad claimed two objectives between them (as he'd become scoring thanks to warlord traits). We baited Belial with some acolytes who came on from reserve which left him in the open and easily gunned down. The acolytes were cut down to a single man but somehow managed to regroup just before the board edge.

All that was left now were the DW knights who sadly failed a charge against our recently teleported dreadknight. This left them within 3" of an objective and when we charged they were unable to finish off our dreadknight (even with Smite) and were still locked in combat when the game ended on turn 5. With one objective contested and the knights in our deployment zone were able to claim 4 objectives and 3 secondaries to give us a 15-1 win. Had we gotten a further turn, both the strike squad and second dreadknight would've been in with the DW knights and I'm sure we'd have claimed all 18. Can't complain at such an excellent start to the day though. Thanks to our opponents for staying in good humour as they removed models. 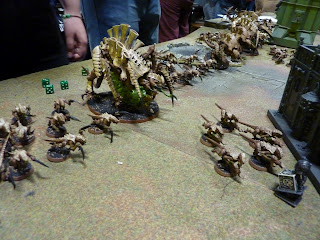 When we saw 2 tervigons and two carnifexes we were almost embarassed that we'd got Jaws on our rune priest. Our opponents, Emmy and Peter, also had 3x17 hormagaunts, 20 gargoyles, deathleaper and a mawloc. We'd be playing the Scouring on Dawn of War deployment.

Our opponents took turn one and advanced forwards (of course). We landed our drop pod behind the advancing bugs and were properly ashamed when we realised our opponents had never heard of Jaws. Sure enough the rune priest was able to cut down a tervigon (the other had been quite literally corked so would spawn no more termagants) and one of the carnifexes with a single strike. Elsewhere the dreadknights incinerated a handful of hormagaunts and the same of gargoyles whilst the strike squad gunned down the remaining carnifex with ruthless efficiency. The deathleaper appeared near the rune priest's squad waiting to pounce whilst a squad of hormagaunts charged the grey hunters cutting down a whopping 5 marines! The response was brutal though with 9 tyranids dying and without synapse they fled. The gargoyles could do nothing to the dreadknight who cut them down in combat. The other dreadknight might be in trouble though as he was fighting something like 30 hormagaunts with the remaining tervigon making them Fearless. 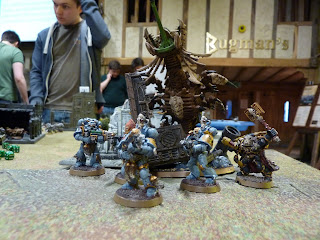 Sadly for our opponents Matt was on form with his 2+ saves though. The rune priest lined up to Jaws both the deathleaper and second tervigon but both passed their initiative tests with 2s. The tervigon was shot at by the recently arrived wolf priest and his squad who, with help from the strike squad, brought it down to two wounds. The dreadknight incinerator then charged some spawned termagants too. The drop pod fired at the fleeing gaunts killing one and forcing them to run again, taking them off the board.

The mawloc appeared directly under the wolf priests squad who I'd stupidly bunched together costing me 7 grey hunters. They ignored the MC though in favour of charging in to clear some hormagaunts
from the dreadknight who was now down to a single wound. A third Jaws attempted failed on a roll of 11 but the tervigon was gunned down by the strike squad and the other dreadknight killed off Deathleaper. Our opponents now only had a Mawloc and half a dozen termagants. In a somewhat dirty move we decided to hold off on charging the Mawloc with our dreadknight to buy us some time to get our troops onto another objective to give us as many points as possible from the game. The strike squad killed off the termagants in combat and consolidated onto the 4-pointer whilst our acolytes finally made it to a 3-pointer. Both dreadknights then charged in and killed the Mawloc, ending the game. Apologies to our opponents for the horrible tactics and equally nasty Jaws. With a 4, 3, 3 and 2 point objective, 3 secondaries and a bonus for killing a Fast Attack choice we'd scored 16-0 but felt dirty doing it. 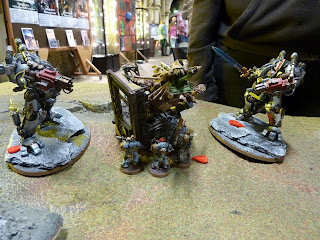 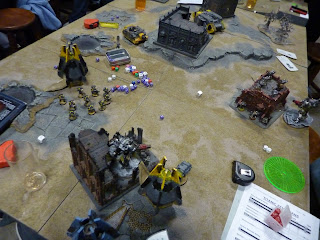 We were convinced that in some sort of karmic retribution we'd be facing triple Heldrakes to balance out the lucky draws we'd got in the first two rounds. We were pleasantly surprised then to face Space Marines. Sam and David had Lysander with terminators in a raider, a vindicator, 5 scouts and three drop pods with a tactical squad, sternguard and dreadnought. We'd be playing Big Guns on Vanguard Strike.

Once again we failed to get first turn which probably helped as our opponents only had a couple of things to deploy and it allowed us to get cover from the vindicator. In a jammy couple of rolls Matt got a scatterfield on both objectives meaning, with Night Fighting, that our dreadknight and strike squad were getting 2+ saves to the vindicator meaning it was unable to kill anything turn one. They brought in the tactical squad and dreadnought either side of one our dreadknights and despite hitting with the multi-melta on snap fire they were unable to harm the dreadknight with it's jammy 3+ cover saves. 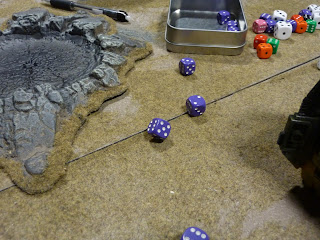 We brought our pod in behind the vindicator and wrecked it with melta, bolters and lightning. The dreadknight and strike squad combined to gun down the tactical squad whilst the other dreadknight smashed the dreadnought in combat. You may not believe us but yet again we felt pretty terrible! The exciting thing was that Sam managed to roll a dice that landed on it's corner which seemed to have a devastating effect on the mind of Coteaz who rolled double 6 followed by double 1 for his powers leaving him with a single wound.

The land raider advanced and spewed its occupants out but unfortunately, after gunning down a grey knight with the raider's guns, they found themselves outside charge range. The response was brutal with the strike squad and heavy incinerator combining to kill a couple of terminators and badly wound Lysander. The dreadknight challenged Lysander and finished him off. Elsewhere the sternguard had arrived and somehow didn't kill the other dreadknight. A combination of fire from the rune priest's squad and dreadknight incinerator then charge, finished them off. The wolf priest and his squad arrived and started to gun down the scouts despite their 2+ save. In the next round of combat the dreadknight killed a terminator and the others broke and managed to get away. 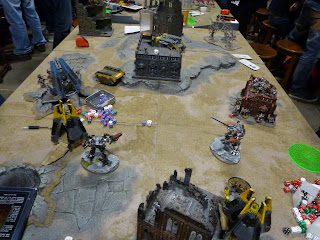 Coteaz decided to try and Misfortune the remaining terminators but double 6'd killing himself! Luckily he wasn't our Warlord. The terminators were then gunned down anyway without the need for Coteaz to have killed himself. Elsewhere, one dreadknight wrecked the land raider whilst the other teleported to incinerate the remaining scout allowing the wolf priest's squad to claim the objective. The drop pods were finished off with shooting leaving our opponents tabled. With two heavies killed, all four objectives and 3 secondaries we'd scored 17-0 this time.

Conclusion
An incredibly lucky day for us. We know our list is great against some armies but weak against others and frankly we got the right opponents in all three games. We didn't play our games badly but I'd say all of our opponents felt it was an uphill struggle. We'd like to thank them for being in good humour despite what we were doing to their armies. This is where the random pairings that GW employs doesn't actually create a friendly atmosphere. It worked great for us but our opponents probably had miserable games. That's the thing with 40K. If you're tabling people then often neither side enjoys it.

Great start with 48 pts from day one but I was even more sure we'd get triple heldrakes on day two!
Posted by From The Fang at 17:00:00