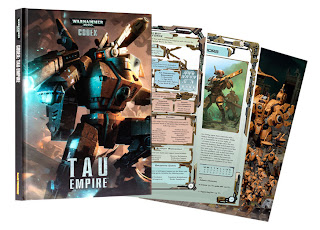 So some of you may have already seen the Spanish version of the Tau codex that has been leaked onto the interwebs. Whilst I don't have the first clue about Spanish I've been attempting to piece together some information on the various units based on the pictures and some educated guesswork. Granted the book is out in like 4 day so I don't know quite why I took the time to do this but whatever...

Sadly the army special rules are not only in Spanish but the picture is terrible (seriously, why are the people with access to codexes bad at pictures - my CSM ones weren't that bad!). This also means I can't read the Warlord Traits. Some of this stuff may well have already been rumoured but since this is almost certainly the real codex they're a lot more solid now.

Crisis Suits
Appear to cost 22pts each now but can still only be taken in units of 3. No longer have the option of making them a team leader but rather you now just pay 10 pts to make them a Shas'vre. Makes sense to me as hardly anyone bothered to pay the extra 5 for shas'vre status. Shas'vre now boosts them to Ld 9 but loses 1pt of WS (I think we'll cope). Otherwise the stats are the same, no toughness boost like some rumours suggested. Get army wide special rule Supporting Fire which is the ranged overwatch assistance thing. Also they're "Very Bulky" although it sounds better in Spanish (muy corpulento!). The options are what will make these good or bad though. Difficult to look at upgrades though as they're on a chart rather than in unit entry like the other new codexes.

Riptide (Cataclismo in Spanish - again sounds better)
Base cost of 180pts with a pretty impressive statline notably toughness 6 with 5 wounds. It's basic gun appears to be the heavy burst cannon which is S6 and EIGHT shots. Seems like the Nova Reactor will allow you to make this 12 shots too at the risk of Gets Hot. Not sure on the Spanish but looks like it rends too when Nova'd. Comes with an SMS which is pretty much the same as it was but can be swapped for a twin-linked fusion blaster or plasma rifle (which are again the same). The heavy burst cannon can be swapped for an ion cannon thing which starts at S7 AP2 with three shots but can be overcharged to S9 AP2 large blast.

Fire Warriors
Still have a six member minimum but are 9 pts for essentially the same stats but now get Photon Grenades for free. Their gun is stil S5, 30" rapid fire. They can all take the "Ritual of Ta'lissera" rule for 1pt each which if memory serves from the old book, relates to bonding knives so presumably is leadership related (that page is nearly impossible to read even if I understood Spanish). Can still take a devilfish which are still 80pts and pretty similar. Difficult to tell much else without translating it all.

With the addition of Fireblade they can fire an extra shot with their rifles or carbines if they stand still.

Kroot
Get 10 by default as before and can buy another 10 but they're now 6 pts each and come with 6+ armour. They're now S3 but retain their WS4 and the hounds are still I5 and are 5pts each. They can now take some sort of special precision ammo for 1pt per model which make their guns sniper rifles and hence Heavy. Hounds have Acute Senses and the whole squad can infiltrate meaning more precise Outflanking which is interesting. They've still got Stealth in forests and the kroot ox is pretty much the same but now 25pts.

Flyers
Unfortunately they appear to be AV 11/10/10 but with 3 HP. Bomber starts at 160pts and fighter at 145pts.  Aside from the Vehicle Upgrades (no sign of what they are or how much they cost) the fighter can take a missile pod instead of the burst cannon for 5pts. The quad ion cannon is S7 AP4 but can be boosted to S8 large blast which is obviously not much use against other flyers but good for ground vehicle hunting. With 6 S7 shots and two seeker missiles it doesn't look too bad for 150pts though. The bomber can twin-link it's missile pod for 5pts but otherwise will be better against ground targets as you might expect. Despite still being BS2 the fighter drones have S7 AP4 twin-linked guns which isn't bad at all when they appear to have interceptor too. They also seem to have afterburners (whatever they do).

Have to decide when I read the English book but at the moment they both look fairly viable. At least they're better than the DA ones already (which isn't hard of course).

Broadsides
They're now 65pts each and still a max squad size of 3. Their twin-linked railguns are now S8 AP1 as was rumour but the missile pods they can swap them for are S7 AP4 with 4 shots. Their SMS are now twin-linked too which is pretty cool. They're then able to take various other options from the wargear table and still seem to get one support system each. They can take a seeker missile for 8pts which seems to be the standard cost of them now.  The shas'vre is now Ld 9 which should help reduce the number of times they run off the board like they used to!

Pretty happy with these. If they do get the option of Skyfire as has been rumoured then they're going to be the goto anti-air for pretty much any army in the game. S10 would've been ridiculous so the S8 makes sense.

HQs
Ethereals are 50pts and Fireblade is 60pts. There doesn't seem to be any option to take them in multiples as squad leaders unfortunately but for dirt cheap HQ to spend your points on something else then you can't complain. Better than the minimum 100pts a lot of armies have to spend.

O'Shovah/Farsight is 165pts and is still equipped the same. He still has Preferred Enemy (Orks) and can be joined by 7 crisis suits in his bodyguard. Sadly this seems to be the only FOC swapping that can be done.

Conclusion
That's about as much as I can be bothered to translate/work out. The codex really isn't that far away but I wanted to get an idea of what this leak told us. Hopefully some people found it helpful.
Posted by From The Fang at 21:57:00