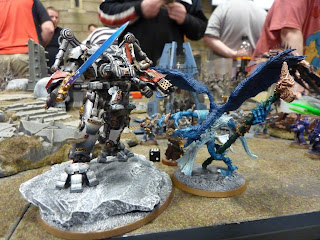 Once again, Matt and I were down at Warhammer World this weekend for the 40K Battle Brothers (which replaced GW's doubles events). After toying with taking a Tau/GK list, we tested it out against Graham and Andy from Claws and Fists and decided that it wasn't as good as we thought. Therefore, we returned to our old faithful Titanic Fenrisians (GK/SW) with the following list:

Not a huge difference from the previous incarnations of our doubles army. The thunderwolves are gone sadly but they're replaced by a Rune Priest and the Purifiers are swapped for a full strength Strike Squad.

As you can see, some lists would be no problem for us whilst others, particularly flyers, would be almost impossible for us to beat. Flyers don't bother us too much though as they're mostly geared up for killing either other flyers or else ground vehicles. The only exception being Heldrakes with baleflamers which would totally decimate our army if we met them in multiples.

After our previous issue with an army list error I made sure I checked this thoroughly. For those wondering, Space Wolves can still have two HQ when taken as allies (see FAQ). Pretty sure I haven't missed anything else.

Results
As you can see from yesterday's post we somehow managed to win the event! No-one was as shocked as I was though! We knew we'd done well of course but we've been in that situation before and come away with nothing thanks to the scoring system.

We'd been talking to some friends of ours (who we met/played at previous doubles) who'd been scoring similar numbers of points to us. Nick, one of the organisers said during the ceremony that it'd come down to favourite game votes. We knew we were 2 VPs behind at least one team who'd won all five games like us and had been told we'd received favourite game votes by one of our opponents. When they announced second place we were sure we'd missed out again but despite them spelling it wrong it was amazing to see Titanic Fenrisians appear on the screen as champions!

As you might recall from one of my other doubles events write ups I had a massive whine about the inclusion of favourite game votes into the overall tournament scores. In a previous event this had dropped us from 2nd to 4th as we hadn't had any votes. This time around we managed to achieve 5 out of 10 votes somehow despite winning our games. This gave us the win over second place who'd scored 3 votes. I have to say a huge thanks to our opponents who voted for us because quite literally we couldn't have done it without them.

Favourite Game Votes
So have I changed my opinion of fave game votes as they allowed us to win the tournament? Short answer, no.

I can understand that the atmosphere that GW want to create is one where people don't feel put off from coming because they're worried about power gamers. It therefore makes perfect sense from their perspective. However, I think there are other ways of minimising the competitive element. At the end of the day it's a tournament and we know from bitter experience what it's like to have a near certain podium finish taken away in that manner.

Battle Brothers uses VPs (6th style) as the scoring system. Some people don't like this as it can mean you annihilate all but one model but still lose the game. Personally I'd say that it's clear from the start how it'll be scored so people should play in a way that minimises the chance of that happening. The favourite game votes are worth 3 VPs each meaning there's a whopping 30pts available on top of the usual VPs. That's huge. In fact looking at the score sheet that's the difference between 1st and 25th!!

So they're worth too many points but the other issue is that it's almost totally out of your control. Sure you can try not to be too anal about rules but whether someone enjoys the game against you is totally random. If you have some jammy rolls that might piss them off. You could have a fantastic, close game that was a lot of fun for both sides but the guys you play give it to their first opponents because they bought them a beer. Not to mention not everyone votes! Granted this time it looks like the vast majority did but that doesn't mean to say people didn't vote for their mates etc.

It feels like no matter how well you play your games you're still at the mercy of an effecitvely random system. I suppose you could argue that's 40K in general though.

Conclusion
I know what some of you are thinking. Only I could win a tournament and still bitch about the scoring system! Fair enough but I think it'd be pretty hypocritical of me to whine about it when it works against us but sing its praises when it works for us.

In some ways I feel like justice has been done for the time when it went against us. We genuinely did our best to be friendly despite doing horrible things to our opponents' armies. All of the games had something cool happen which made them memorable but I'll be writing in more detail about that over the next couple of days.

For now, I just want to say another huge thanks to our opponents for giving us 5 memorable games but I'd also like to thank the staff (doubt they'll read this), since no matter what they do to try to make the event better people still bitch. It's a great event that I'm determined to attend as often as I can. We've got a title to defend after all....
Posted by From The Fang at 17:00:00