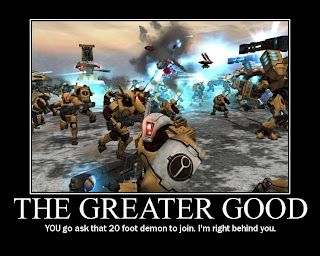 In a blatant rip-off of Natfka from Faeit212 I'm going to try and write an almost weekly editorial post where I collect together some random thoughts I've been having over the last week or so. So often I have things I want to talk about that aren't worthy of a full post. Therefore I'll make a note of them and collect them together in posts like this and hopefully they'll be interesting.

The Tau Codex
I may have alienated some of my audience by this incessant talk about the Tau codex but I can only hope people will bear with my as my enthusiasm for the book doesn't show any signs of letting up. This post will at least be a break from my relentless Unit Review posts. One of the things that keeps coming out of the comments sections of my posts are the sheer number of interesting and effective combinations that can be created.

At the centre of most of these is the ultimate in 41st millennium Swiss army knives - the crisis suit. The commander has such a bewildering array of options that I think it'll probably be the year 40,000 before we've worked out all of the possible uses for him. The most obvious route, the one I went for initially, was simply to stick him with a crisis team and use him as a tank. I now feel pretty daft for my naivety! For starters I hadn't twigged that the puretide chip can give him Tank Hunter/Monster Hunter which can be shared with his unit. This opens up a huge array of options and its probably an auto choice for 15pts. More on this guy when I cover HQs but my mind is racing with ideas of what he can be used for.

What's clear is that this codex is far from a monobuild book. For me the thing that ruins a codex is units which are pretty much automatic choices. This leads to boring armies and that feeling of "oh I'm playing Necrons in my next tournament game oh well that'll mean plenty of flyers and wraiths!". The beauty of 40K for me is that no two armies need be exactly the same. Of course as more people play games and write lists we all gravitate towards an "optimum" build but it's nice when that isn't obvious and overnight.

My problem with the Dark Angels codex was that vast chunks of it were simply never going to be used. Sure you can field a pile of greenwing but why would you when there's more fun to be had with the black and cream portions of the book? I'm struggling to write an interesting and competitive mixed wing list which leads me to the pure Ravenwing style army. The issue here is that whilst the bikes look awesome, they're reduced to a gunline by the bolter-banner. Not taking it feels like a missed opportunity though.

The Tau cadre doesn't have this problem. They're supposed to be a gunline and in actual fact, whilst you can build a gunline, you can also make a devastating dynamic force. I'm excited to play against some Tau armies in tournaments and learn more about my own army in doing so.

Chaos Daemons
With all of the hype surrounding the Tau release the Daemons book may as well have been released years ago. There were a lot of detractors who said that there was far too much randomness in the book to make it competitive but personally I disagree. Sure you have a chance of ending up with a ludicrously strong force or a pathetically weak one but most of the time you'll get something decent.

One thing is for sure. Flying monstrous creatures in numbers is nasty. Most of the greater daemons are good with probably the best being the Lord of Change. Couple him with some more FMCs and there aren't many armies than can deal with them. Even if they crash (which isn't all that likely - especially when Matt is rolling for it), they're still able to fly again next turn and will probably have covered enough ground turn 1 to be in combat turn 2.

I have little or no interest in the Daemons but the thing that might pique my interest is the randomness. Sure it's gutting if you don't get the rolls you want but the thrill of knowing how good something could be is worth it I reckon. Granted some of the randomness seems a bit excessive but otherwise it makes them more interesting. Are they still competitive? Only time will tell. Certainly they benefit from some CSM allies or being taken as allies themselves.
Posted by From The Fang at 17:00:00