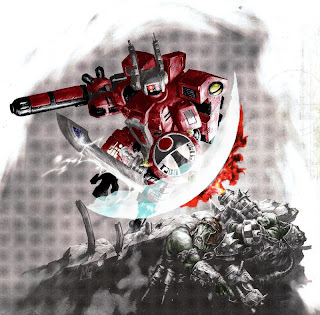 In a similar fashion to EYIG over at Apostates Anonymous, I'm going to look at the Tau HQ section in two chunks. Firstly the Special Characters and then the standard options on Monday. The most notable thing here is that none of the HQs modify the FOC choices in any significant way. This came as something of a disappointment to the community but personally I'm not bothered.

Commander Farsight
He's always been a bit of a strange one. The new version of the codex has done away with the FOC limitations that he used to impose but otherwise he's pretty similar. His Warlord Trait is key for his role as it gives him a scatter-free deep strike. This is a pretty big deal when you consider the options that his bodyguard could take e.g. fusion for taking down tanks. He's pretty reasonably priced at 165pts given the kit he comes with. Despite having a shield generator for a 4++ save he's not as tough as a normal commander can be with iridium armour. Now I'm sure from a fluff perspective he probably wasn't around when they invented the 2+ T5 armour but from a gaming perspective it seems strange that he didn't get it. Granted it would've undoubtedly increased his cost but he'd have been pretty awesome with it.

The reason I say he's a strange one is that he's one of two close combat orientated (more on the other later) units in an otherwise pure gunline. Crisis bodyguard suits can be alright in combat with their 3 attacks at S5 but with poor initiative and WS they struggle most of the time. So Farsight ends up either splitting off from his unit and diving in or else dragging a shooty unit into combat with him and potentially making them miss a round or two of shooting. Farsight himself is decent in combat though with I5 and 4 S5 AP2 attacks (with armourbane). In a challenge he's got a good chance of killing off most non-EW multi-wound models.

Most people will talk about the "Farsight bomb" here but personally I think it's a waste of time. Your paying out for Farsight just to take more suits and avoid scatter. For the same cost you could have two crisis teams and hit different targets by taking your chances with deep strike. I just can't see me taking him in competitive play when there are much more useful HQ choices.

Commander Shadowsun
On her own he's pretty decent with two fusion blasters, advanced targeting and a stealth suit. The ability to split fire means that potentially you could take her solo as a tank hunter. Throw in a couple of shield drones and she can make the most of her long thrust move to keep safe. Tack her onto a crisis team though and she can be great fun.

She'll give them re-rolls of 1s when shooting and offers them the option to Outflank instead of Deep Strike. This also has the advantage of giving her an effective toughness of 4 too (although her drones can also give her that). Whether with a squad or solo she also has Stealth and Shrouded meaning a permanent 4++ save to shooting which can easily be 2++ in any sort of cover.

She's 30 pts cheaper than O'Shovah and aside from the combat prowess (sort of) and accurate deep strike I think she's a better bet if you're wanting a special character. She still loses out to the normal commander though. When the commander is so flexible it seems a shame to limit your options. That being said I think I'm probably missing something with her. Of the HQ specials she's probably the best.

Aun'va
Aun'va, or "the space pope" to give him his proper title, was an absolute joke in the previous book. He's slightly better in the new book with two Ethereal "powers" and army wide morale re-rolls. However, the main issue with him is that he's not an independent character thanks to his bodyguard. Now this isn't necessarily an issue since you can just hide him out of sight but personally I don't like the idea of a unit hiding and not doing anything (except buffing of course). The Ethereal "powers" aren't all that brilliant and most of the time there's only one to use anyway.

His funky FNP kind of thing is a bit odd as well. Don't get me wrong is a fun idea but it actually makes him more vulnerable to guardsmen than it does terminators?!?! Personally I'd rather save 50pts and take a regular Ethereal who still won't do anything except buff but at least I can hide him in a unit. His warlord trait is probably the least useful out of an otherwise great table but you'd never make him warlord as he'd give far too many points up when he died. Again, perhaps I've missed something but I can't see a point in taking him.

Aun'shi
The second of the combat characters in a shooty army, Aun'shi is interesting. He's more expensive than Aun'va at 110pts but has a normal invulnerable save of 4+. He's clearly been designed for challenges when you look at his special rules and potentially could take enemy characters out thanks to I5 and Rending. Realistically though the problem is where to put him. If one of your fire warrior teams is getting assaulted he might kill a character but will still die with the rest of the unit. Otherwise he's stuck there costing you 60pts more than a regular Ethereal. Interesting then but still pretty useless. I'd like to give him a go in a friendly game but he'd never see competitvely play in my army.

Darkstrider
He's pretty cheap as HQ choices go at 100pts and if it weren't for Ethereals and Fireblades he'd probably see more use. As it is that 100pts is comparably expensive. He's clearly supposed to be a Pathfinder but he's actually better with Fire Warriors.

Stick him with Fire Warriors and you're getting a BS5 markerlight on a different target to the unit. The problem is that then you're wasting his Structural Analyser which only works on the unit he targets. Therefore his markerlight is likely to be wasted and you're probably better firing his carbine (depending on the situation of course). With his -1 toughness a unit of Fire Warriors will be wounding most things on 2s which is, if you can combine it with an Ethereal and some marker hits, a pretty devastating thing. His Outflank could be useful for getting Fire Warriors onto objectives but then you're likely to be out of Ethereal range. In this capacity the Fire Warriors will be tough to shift though. They'd fire their Overwatch, potentially killing a model or two and then retreat D6" which could make them very tricky to charge. Doesn't stop them being shot at though!

He's a possible competitive choice then but once I start talking about the standard HQ choices I'm sure you'll see why he loses out.

Conclusion
For me the best options here are Shadowsun and Darkstrider. Both offer something interesting and if you tailor units accordingly they could be great in some situations. Realistically I think both will lose out to the standard choices though. I really want to like Farsight but I think he encourages people to drop a whole blob of suits into the thick of it. This can work out great but should they be assaulted by something killy then they're going to be an expensive loss. They could be great but it's a lot of points to spend on a distraction.

As ever with Special Characters they're a matter of personal choice. All of these guys (and girl) could be used depending on your style of play. In a competitive environment they don't really offer something that you have to have. Right, after a brief pause to talk about Blog Wars I'll be moving onto the rest of the HQ section.
Posted by From The Fang at 17:00:00