As I've mentioned in the reports on our battles this weekend the GW tournament system is far from perfect. Sadly they beligerently stick with it and if anything they're progressively making it worse. Here are a few thoughts on the subject. 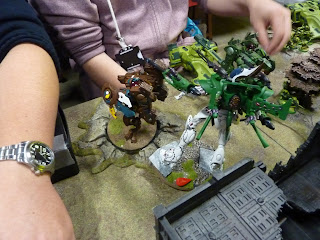 The main thing GW have done right in 6th edition is to switch from a W/D/L system of scoring to a VP based version. Now it's no secret I'm a fan of the latter and the main reason for this is that I think it's a lot more representative of how a player performs in a game rather than just a black and white win or loss. Obviously the issue is that not every game is worth the same number of points. Our experience was a great example of this. The maximum score achieved in Purge the Alien was 18 (including secondaries) and we achieved the maximum of 16 from our game but it's a well established fact that this is far from the norm. Had we played our 3rd match opponents sooner we'd have had a maximum of 10 pts available. There's Relic which is worth 6 VPs at best (without any army specific bonus points) right up to The Scouring which could be worth 18 VPs.

So the system is far from perfect but at least it should roughly represent performance in a more analogue way. The problem is that GW essentially ignores your results until the end of the tournament. The pairings at the doubles are totally random. GW's reasoning behind this is that it means the event doesn't feel as competitive and you don't really know how well you're doing relative to everyone else. Sadly this misfires completely as you know how many VPs were available so if you've scored the maximum you should be at or near the top. Rather than encouraging a friendly atmosphere this actually makes the likelihood of mismatch a lot higher. We shouldn't have been playing the teams that we did.

This also means that a mediocre list can win the tournament and indeed that's what happened. Sour grapes you might say because we lost to it but seriously at a regular event that list wouldn't have come close. Obviously there's an element of luck in your pairings and rock/paper/scissors will always occur as it's the nature of 40K. However, to have competitive players such as Matt and I playing our final game against people who mainly brought their list for the painting competition (and won it!) is daft. It's a refreshing change as you don't get as much animosity as pure competition brings but I doubt our opponents particularly enjoyed the experience.

At the end of the day the games you remember most are the close ones. For that reason Swiss Pairs makes sense. It isn't perfect and indeed doesn't work well in one day events but at least it's a step in the right direction. Luck is a huge part of tournament play no matter which pairing system you use. Essentially you can win the event before you roll any dice if you're picked against the right lists randomly. It's a well known fact that a solid but not overly crushing victory in the first game is best. Win too convincingly and you're more likely to get smacked down in round 2. 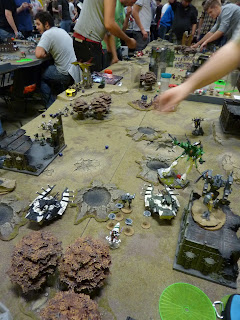 Matt and I have had the mixed fortune to be on both sides of this system. Last year we placed 4th with a performance that should've been good enough for 2nd thanks to favourite game votes. Earlier this year we won the event thanks to fave game votes (we'd have been 2nd without) and this time around we were 5th and again should've been 2nd. Funnily enough the guys who came 4th would've won outright in a regular tournament.

I can see why GW want to encourage people to be nicer to their opponents as it can really make the difference between an enjoyable game and a miserable one but to factor it into the overall scores is just stupid. The reasons for this are multiple but here's just a few. I've discussed this before but I feel it's worth bringing up again.

Firstly, the voting system is pretty random. What makes a favourite game is difficult to quantify. People are unlikely to vote a loss as a favourite game. This puts the system at odds with the competitive side of the event. The other element of randomness in it comes from the fact that you can't guarantee everyone will vote in actual fact 82 of the 85 teams did cast their vote which is pretty good but what if one of your opponents doesn't vote? You're also more likely to vote for games that happened on day two as that first game on day one fades into memory.

They're weighting is obscene. I understand GW want to make a big deal of sportmanship but 3pts per vote is ridiculous. One team scored 24pts sweeping them from mid-table obscurity to the top 10. That's just daft.

Finally, and most importantly for me, I'd be very surprised if GW actually checks who voted for who. Did you actually even play the person you're voting for? This leads to problems of big groups of friends all voting for the same team. Obviously you risk being caught out if you score more points than are available but that's pretty unlikely to happen.

I know what you're thinking. Perhaps Matt and I should just be nicer to our opponents! Well last time we scored 3 votes and this time just 1 but I'd say if anything we got on better with our opponents this time compared to last time. The system is almost completely random.

Ultimately, the big problem I have is that there are a maximum of 30 points available in a tournament who's highest scoring team scored 58 VPs. These are points you have little or no control over. Of course you can be nice to your opponents but you still need to win games. Of the five games there was only one team that didn't seem worthy of our favourite game vote and they won the event having scored 4 votes from somewhere! Perhaps they were just miserable with us because they didn't expect to win. 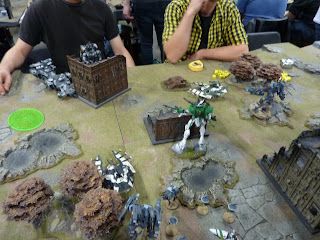 There was a ridiculous number of Tau armies on display at the event. It didn't matter which way you looked you could see riptides at every turn. We met a few people over the weekend who are in same position as me. I've been playing Tau for a good while now and whilst I love the new codex, unfortunately so does everyone else.

This isn't a unique phenomenon to Tau. I'm sure there were die hard Eldar, Necrons and Daemonhunters players that ended up looking like bandwagoners when the new codex hit. I'm sure there'll be plenty of people who suddenly collect a marine army if it proves to be competitive. On the subject of that, I've had the new book for a week now so I think it's time to start my detailed reviews tomorrow.
Posted by From The Fang at 19:00:00