Today I'm going to look at the Fast Attack slot. This section is actually pretty easy to choose from. Essentially it's a toss up between bikes for grav weapons or anti-air from the Stormtalon. 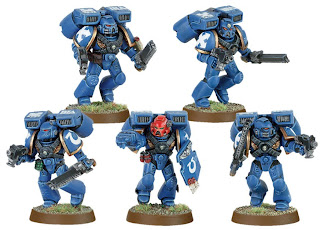 A ten-man unit of assault marines works out at about 10pts cheaper than the old book when you factor in the veteran sergeant. Otherwise, apart from being able to take a second special weapon at less than 10 models, they're pretty much the same. As ever they can ditch their jump packs and take a free transport.

It's a huge shame that you can't make them Troops in a Raven Guard army. It could be argued they'd be treading on the Blood Angels' toes but I think they're different enough for it not to matter. It would then make the Raven Guard chapter tactics a bit more valuable. As they are I can't see much of a call for Assault Squads in the current SM army. They mind find a role as the bullies of the book being able to pick on cheap scoring units like cultists etc. Put them up against anything decent though and they'll soon show that they're just marines with an extra attack. Sadly they're victims of the shooting focus of 40K at the moment and again it's the nicer models that suffer. 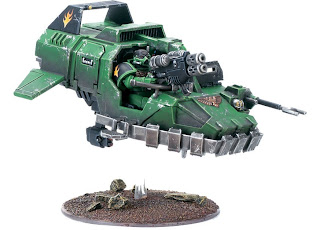 There was a time when a cheeky land speeder with multi-melta and heavy flamer was a nice, cheap addition to any Space Marine army. They were great for dealing with enemy AV14 and hordes alike. Sadly with the hull point system anything with massed S4 weaponry can make short work of them. The other major blow to them was that vehicles can no longer contest objectives. This put pay to an often used tactic of swooping in on turn 5 to contest an objective and win the game.

There are potential uses for them as fire support but for my money you're better taking the more expensive stormtalon for that role. It may be double the price but I personally think it's worth it. 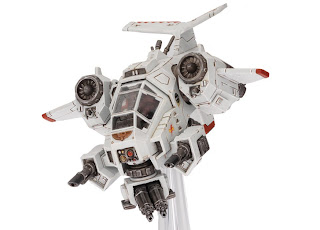 Before the Stormraven got retconned into the Space Marine army the Stormtalon was the best option for anti-air in the SM book (well it wasn't in the book but you get my meaning). The Stormtalon has many detractors thanks to it's AV11 and pair of hull points. However, when you compare what you get for 140pts to what the Nephilim does for far more then you can start to see a benefit.

Escort Craft is of minimal use but does allow you to guarantee you get both your Stormtalon and Stormraven in the same turn to limit damage from Interceptor units. Strafing Run is a nice bonus and makes the Stormtalon a decent option for anti-infantry applications. Ceramite Plating is unlikely to save it as melta weapons are predominantly S8 but again it's a nice to have. I think the Stormtalon is often overlooked but I personally think it's the best anti-air option in the book. Not too expensive and not devastating to lose to Interceptor fire. 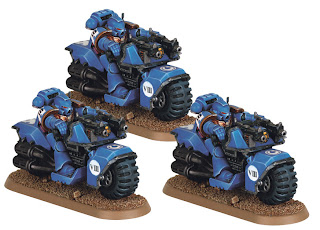 You don't need me to tell you that bikes will be popular in the latest version of the SM codex. Everyone is talking about White Scars at the moment and for good reason. An army of scoring bikes with Scout, Hit & Run and grav weapons is a fearsome prospect. Incidentally, now's a good time to look at grav weapons and in particular the grav-gun.

What it lacks in range it makes up for in damage. Mounted on a bike it has an effective range of 30" and with the Scout rule that's extended to 42" in turn one. That means there isn't anywhere on the board that can't be touched from the off. Thanks to Relentless from the bikes the grav-gun will be firing 3 shots in each shooting phase. Against marines you're wounding and usually killing on 3s. That's great but even better is that terminators and anything else with a 2+ save (looking at you, Riptides) is being hurt on 2+. Grav-weaponry is easily the stand-out wargear in this book. Ironically you'll struggle to hurt Kroot with them but your twin-linked bolters will sort them out instead. Against vehicles you inflict Immobilised on a 6 and strip a hull point. There's a debate about whether you strip two hull points or not but there's still the potential for a grav-gun volley to down a vehicle.

What some people are overlooking I think is the Concussive special rule. This is where the synergy in the SM book appears. Your bike squad might not be that great in combat but if you've hit your target with grav weaponry then you should be able to do a decent amount of damage on the charge with your opponent now reduced to initiative 1. Obviously this is only useful against multi-wound targets but it shouldn't be ignored.

Expect to see a lot of 5 man bike squads with two grav-guns on a table near you. They'll be fantastic in White Scars armies but even in a standard force a Captain/Chapter Master will allow them to be troops. They should be selling like hot cakes for GW right now.

Attack Bike Squad
As ever these come in two flavours dakka heavy bolters or tank hunting multi-meltas. Personally I think they're pretty overpriced for both roles. Granted they have a place when you're facing AV13 or 14 but for the most part I think there are better ways to spend the points. Throwing one into a normal bike squad might be worth it to allow combat squadding but as a seperate unit I think they're less useful.

Still, with Scouts you could pack your Fast Attack slots with single attack bikes which Outflank and try to take down a tank. There's potential for excellence there at least, if you can bring down an annihilation barge with your 55pt model then great. 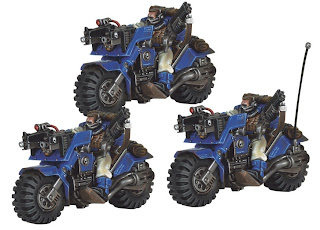 In a bike heavy army these guys might find a role. They're great for getting a deep striking unit in accurately thanks to Scouts/Infiltrators but they do of course suffer from their scout statline. They're a low cost option though and you can give them all grenade launchers to make them more useful. Cluster mines are interesting but with the way Dangerous Terrain works now you won't kill as many models as you would have in 5th. Still it could put your opponent off using a particularly useful piece of terrain. Overall I can't see them getting used a great deal though.

Conclusion
Bikes are the standout unit here thanks to their graviton weaponry. Ironic really since most of the time they'll have been made into Troops. In their abscence my favourite choice here would be the Stormtalon. It offers decent anti-air firepower for a reasonable cost. The rest of the units here will be personal preference but I probably won't be including them if I decide to start an SM army.

Tomorrow I'll look at the heavy support slot before taking a look at some ideas for army lists over the weekend. I hope you're finding these articles useful and worth reading.
Posted by From The Fang at 18:00:00