Continuing where I left off yesterday here are the seven remaining special characters. The vast majority of which fight their battles in black armour. Is there just me who thinks there's a bit too much black armour in this book with the addition of Templars? 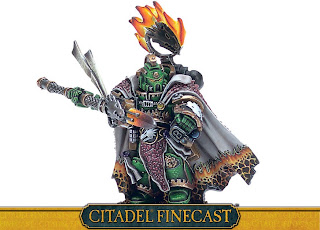 Having artificier armour already sets He'stan apart from the other characters. Throw in a 3++ save too and he's already looking worth his price tag. If you gear your army around melta weapons and flamers (as you should for Salamanders) then you have a pretty deadly combination. His S6 AP3 weapon will be great in challenges as Master-crafter and Digital weapons makes up for two-handed. His warlord trait maybe somewhat mediocre but I think he's still potent in combat and a reasonable option all round. Twin-linked (effectively) melta weapons are going to cause a lot of armies problems, we may be in an era when vehicles are less common but forcing instant death on characters is handy. Salamanders have potential but I fear they'll be overlooked. 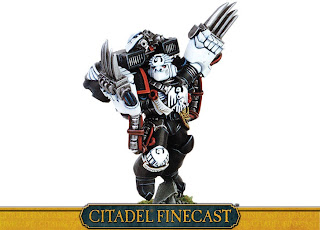 Big disappointment for me here. I've long been envious of Matt's Blood Angels as I've always loved the look of jump pack marines. Sadly Shrike doesn't unlock assault marines as troops. He's still good as part of an assault squad or even vanguard vets but those units themselves are of limited use so he feels a little bit of a let down. The Raven Guard chapter tactics would make for some quick and deadly assault squads but most armies are able to deal with them despite their speed. He's far from awful but I'm just not convinced he's worth his price tag and Raven Guard are likely to be least common of the SM chapters we see on the table-top. 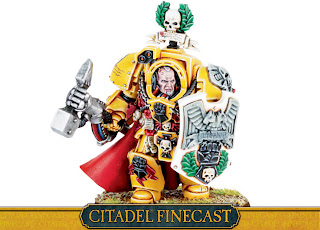 First thing I notice about him is the combination of storm shield and iron halo. Perhaps if a vindicare takes away an invulnerable save then it'll be worth it but otherwise it seems an odd pairing! He's again got the potentially excellent Champion of Humanity and with 2+/3++ and Eternal Warrior he's going to be as tough to shift as ever. Gone are the Bolster Defences and Bolter Drill rules but Imperial Fists get a form of Bolter Drill now anyway. The standard tactic of Lysander with sternguard in a drop pod may be a thing of the past now but he's still hard as nails and an S10 AP1 hammer is pretty tempting to me. Put him up against monstrous creatures and other characters and he'll nearly always come out on top. 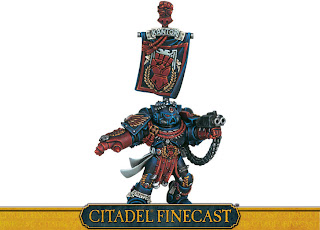 Pedro is geared towards a combat orientated army which, outside of terminators, marines have never been all that effective at. A +1 bonus to attacks is potentially useful but most of the time it won't worry your opponent too much. The reason to take him though is to have Sternguard as scoring units. Whilst you may not be able to use the Chapter Tactics with their special ammo they'll still pack a hefty punch. Having another option for troops is great and we might see drop podding sternguard used in combination with Pedro. 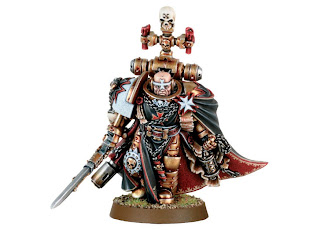 Helbrecht has the potential to be a combat monster against the right target. He's already got 4 attacks but with the Legacy of Dorn he can potentially have 7 AP3 attacks. Giving the whole army Hatred and Fleet could make for a devastating assault phase especially combined with his warlord trait that gives Furious Charge. The question is how effective combat is at the moment. There are so many armies around with huge amounts of fire power and Tau supporting fire makes assaults difficult at best. Mind you, 180pts isn't bad considering his statline and equipment. The other question to ask is whether Black Templars are likely to be chosen over the other chapters or not.

Chaplain Grimaldus
An interesting prospect with his bodyguard of servitors. Essentially the servitors simply act as ablative wounds for Grimaldus. Combined with It Will Not Die they may make Grimaldus tricky to shift but then he's probably better joined to a normal unit to make the most of him. A 6" Zealot bubble is no bad thing I suppose but again it's a combat boost which isn't something marines do especially well. Maybe I'm missing something with the Black Templars but unless the meta changes significantly I can't see a decent way to make the most of them. I'll happily be correct though as they were one of the front-runners for which chapter I'd like to collect before the codex hit. 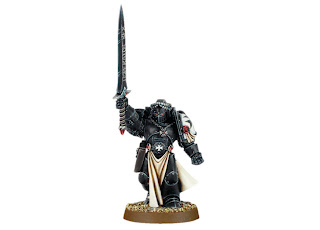 The only model to come in at under a tenner, the Emperor's Champion is also on the cheaper end of the special characters. He's actually pretty interesting too. Obviously he's geared up as a character killer so if you manage to get the Champion of Humanity trait then you're laughing. He isn't especially survivable in combat against anything with AP2 but otherwise he should be able to survive long enough to inflict some hurt thanks to the potential to be S6 or else have the potential to cause Instant Death. Realistically most of the time you'll choose the latter as, although less reliable, the potential to insta-kill something is very tempting. Don't overlook that he's Fearless too which would be conferred to a squad he joins. This could make a large Crusader squad led by him into something pretty fun.

That's it for the special characters then. With the possible exception of Tigurius and maybe Lysander, none of them particularly jump out as being must-haves. Part of the problem is the ability to build your own character with some of the relic weaponry. This has the advantage of not restricting you to a particular chapter.
Posted by From The Fang at 18:00:00