Today I'm going to look at the Heavy Support section. On the face of it this is the most crowded portion of the book. A lot of the battletanks are now showing their age but other units like the Thunderfire Cannon will still be very popular (if not more so). 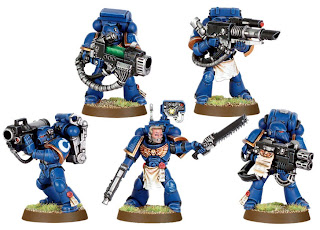 In line with the Dark Angels codex these guys now have the option to take flakk missiles in the always popular missile launchers. However, as I said for the DA version, flakk missiles simple aren't worth bothering with for the points. They get outclassed by a 50pt quad gun every time. With that aside little has changed for the Devastators. They're significantly cheaper than they once were though with a full unit of 4 lascannons coming in at 150pts. That's pretty good considering the number of multi-wound models that are around now. They could worry the broadside spam lists and wraithknights.

Their problem is the same as it always was, mobility. You can of course buy them a razorback but most of the time you'll pick a piece of terrain to stick them in and hope they have line of sight for the rest of the game. I don't think they're awful by any stretch of the imagination but there's no denying they're too static even if they're a lot cheaper. 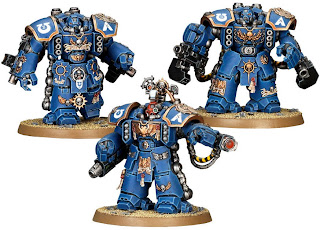 If you decided to splash out on some centurions then I really hope you built them up as devastators. In their standard loadout they provide a decent amount of anti-infantry fire with the twin heavy bolter and hurricane bolter too. However, you'll never see them loaded up like that.

You can swap the hurricane bolters for a missile launcher and give them a twin-linked lascannon but that makes each model 90pts a piece and they're only slightly more mobile than the much cheaper devastators. No, what you want to take is the grav-cannon and grav-amp. It may make them 80pts each but I'm pretty certain it's worth it. Throw in an Omniscope on the sergeant too so he can target a separate unit and the whole unit isn't gimped by Night Fighting should your opponent venture into 24" range.

The grav-cannon may be short range but if you're in range then they'll be devastating. They do everything the smaller grav-gun does but they'll fire 5 shots when mounted on the centurion suit. That, combined with the grav-amp, makes for an extremely potent monstrous creature (or even vehicle) killer. A 6-man unit of centurions would set you back 500pts but they'd have no trouble making back that total if there are flying MCs, wraithknights or riptides around. The problem is your opponent knows that so they'll be a priority target. However, they should be able to weather quite a bit of fire. Broadsides are pretty tough to shift and they're only T4.

Realistically the best way to run them is probably a 3-man unit with grav-cannons for 250pts. That will be a big deterent to monstrous creatures and attract a lot of attention. Only thing to decide then is whether you can overlook their aesthetics! 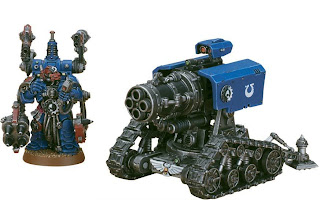 At first glance the thunderfire cannon seems to be the same as always. It's the same gun for the same points. You still get Bolster Defences which means, should you take three thunderfire cannons, you'll be able to shore up those terrain pieces with your objectives inside. Having 4 blasts can be great if you can catch some models bunched together and you might even take down a vehicle or two if you're lucky and they're made of paper. Tremor isn't stunning but might save a unit of yours from getting charged for a turn.

Hang on a minute though, the reason the thunderfire cannon is excellent now is the Barrage special rule they snuck in there. There aren't all that many Barrage weapons around but they're excellent in 6th edition. The reason is they can be used to snipe models out of a unit. Think about putting the Surface blast over an Ethereal. Should you hit the target then its a cover save or remove him. Obviously LoS is a factor but if you get lucky it could be devastating. The same is true of any other character that boosts a unit. Snipe that power fist before your bikes/terminators wade in and you're laughing. 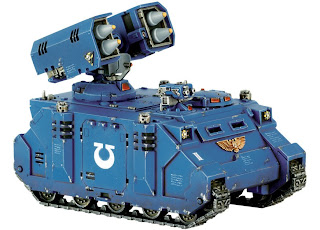 I've grouped these three together because they're probably going to be overlooked as often as each other. The whirlwind has long since been relegated to the shelf but Barrage and a tiny price tag make it a possibility in these infantry overloaded times. The vindicator suffers from no longer having Barrage on it's demolisher cannon. The problem for both tanks though is that pretty much any damage result is devastating for them. Perhaps Immobilised doesn't affect the Whirlwind as much but otherwise you only have to penetrate the armour and they'll be effectively taken out of the game. Still, whilst the vindicator is operating a full capacity it's a threat that can't be ignored. It's an equal threat to infantry, daemon princes and vehicles alike but don't expect to get many shots from it.

The predator might get more of a look in though. Like the vindicator it's helped by having AV13 and 95pts for the dakka version is criminally cheap. I'd even say 140pts for the annihilator (lascannons) variant is perhaps worth considering for upsetting broadsides and MCs. Sadly though it will only be the most die-hard of mech fans that include them in their lists. That is unless the shift back to mech that was predicted after the Eldar codex actually happens. 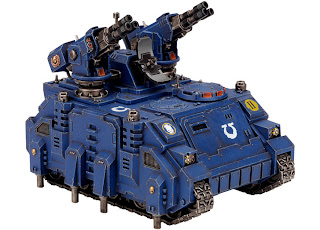 Although expensive this kit is quite an attractive one. You just need to find another cheap rhino hull and you can make both variants. Realistically the Stalker is probably more practical as it has the potential to hit two different targets. The icarus stormcannon isn't much better than a quad-gun but perhaps harder to silence. The hunter is a lot of fun with the missile chasing a flyer around all game but both variants are let down by being S7. Still Armourbane helps out the hunter at least.

There are, however, bigger problems for these tanks. Firstly they'll be public enemy number one to any opponent with flyers and an AV12 vehicle isn't that hard to kill for most armies. If you've got a suitable piece of terrain to hide the hunter/stalker behind though it might make survive long enough to shoot at a flyer (whether it will kill it or not is another matter). The biggest issue though is that they only have Skyfire and not Interceptor. Any flyer with anti-tank weaponry, like a stormraven for example, will be able to bring the stalker/hunter down before it gets to fire. Secondly, if your opponent hasn't got any flyers then you're pretty snookered having spent 70-75pts on a dud. I'm not sure their anti-air potency justifies the risk of impotence. 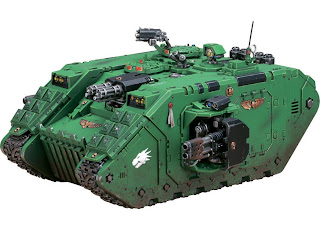 There isn't much to say here that hasn't been said before. AV14 can be incredibly tricky for some armies to deal with and a lot of the time the land raider will have delivered it's cargo of assaulty goodness before it dies. However, other armies will make short work of them and you'll be left in the hole to the tune of 250+ pts. I can still see a place for them though and depending on the ebb and flow of the meta the land raider could become king again. We're certainly seeing a lot less melta than we once did. All three variants have their uses. The Crusader might have limited weaponry but it'll find use for it's capacity. The Redeemer is great thanks to the balance between decent capacity and Flamestorm cannons being excellent when they're in range. Even the standard land raider is useful as lascannons are having somewhat of a renaissance recently.

It's worth mentioning Chronus again here. A BS5 land raider that ignores Shaken/Stunned and gets It Will Not Die is not something to be ignored even for 300pts. Similarly Iron Hands land raiders could be annoying to anyone trying to bring them down without melta. 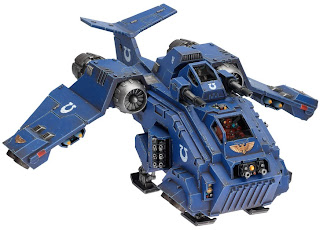 Last but not least we come to the Stormraven which is now officially part of the codex. It's essentially the same as the Blood Angels version but with AP2 rather than AP1 missiles. For me the Stormraven is still the king of flyers. The Heldrake may be more devastating against ground targets but against other flyers its nearly useless (vector strike is an option). The Stormraven on the other hand has the firepower to comfortably take down an enemy flyer with the possibility of downing two. Being able to transport 12 models and a dreadnought appears nice at first but that's a lot of points in reserve. It'd be worth bringing along some reserves manipulation but only UM players have access.

The Stormraven is easily the hardest flyer to deal with. AV12 all round and not affected by the extra melta dice. It may be expensive but you get a lot for your points. Assault Vehicle is excellent for the dreadnought or whatever else is in the hold (obviously not in the turn it arrives though). Power of the Machine Spirit keeps it going in spite of Shaken results and allows it to deal with two targets. Hover prevents it from needing to leave the table even if it does make it vulnerable for a turn. As you can tell I'm a huge fan of the Stormraven, I even like the look of it (controversial I know).

As I've said, the issue is the number of points you've got waiting in Reserve which can leave the rest of your army outnumbered. It's also got stiff competition in the Heavy Support slot.

Conclusion
I really think this FOC slot is the hardest to choose from. There are plenty of viable options here and choosing between them will be difficult. As ever in 40K you want multiples of things to make them more effective and below 2,000pts that will be difficult. Having said that the ability to ally SM with SM means you can effectively take 4 Elite, Fast or Heavy choices provided you paint them a different colour!

The stalker/hunter is a great looking kit and I'm always amazed how much mileage GW get out of the rhino hull but it's anti-air abilities are somewhat overshadowed by the flyers in this book. Obviously you can get 2-3 hunter/stalkers for the same price as a flyer but the flyer will probably serve you better.

It's irritating for me that every SM chapter except Dark Angels and Space Wolves (i.e. the two I play) gets access to the Stormraven. I can only hope that the SW book has a flyer in it but there's no hope for Dark Angels unless you take allies which I resent having to do. I've spoken before about my huge disappointment over the DA flyers but this just seals it.

That rounds up the review of the codex then. Over the weekend I'll be looking at some army lists and trying to figure out where this codex will sit in the current meta.
Posted by From The Fang at 18:00:00