New Additions to the Blog Roll

Here's a quick run down of the blogs I've added to my "Recommended Reading" section on the right. I'll try and keep an eye on them and make sure they're all active. These have been added from the comments on yesterday's post. I've not had chance to flick through them in too much detail yet but wanted to get them out there for everyone to enjoy. Oh and come back tomorrow for the first of a series of articles about how I'm trying to make Blog Wars 6 the best it can be. 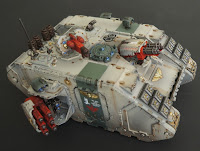 40K Hobby Blog
Some beautifully painted miniatures on display here and the author is also working on some stuff for the Nova Foundation which is a cause well worth supporting. He's got a warhound titan on his painting table at the moment too.

40K Warzone
An Australian blog who do some awesome commission painting work. There are also tactical guides a few of the 40K armies that I'll be checking out when I've got more time.

Confessions of a 40K Addict
I've come across this blog before in one of my browsing sessions but never bookmarked until now. There are some excellent STC (building templates) as well as some excellent downloads alongside a steady supply of blog posts. He also recently attended the Battle Brothers one dayer at WHW and came second but we all know they let anyone do well at that thing!!

40K Daemons
I'll give you three guesses what this blog is about. Even if you aren't a Daemons player I'd recommend checking them out as it's always a good idea to know your enemy (speaking of which I intend to restart my series and update it for 6th edition). Immaterium Press
Seemingly a tournament orientated post (which people seem to refer to FTF as too) , the author has also been taking a look at the X-Wing game that I've been sorely tempted to get into.

Den of Imagination
A Polish blog who also do commission painting. In fact your might recognise the Dark Angels as the army used to win the painting competition at Blog Wars. Rest assured that I'll be trying to encourage people to only enter the comp at Blog Wars 6 if they painted it themselves. Still some awesome work on display here.

La Taberna De Laurana (Laurana's Tavern)
As you might imagine this is a Spanish blog so for most of us it'll require Google to translate it for us to enjoy. They cover a lot of rumours and the name rings a bell from the Tau rumours as I believe they were one of the sites with a leak. Still, worth checking out.

Table Top Addicts
Seems like there's a lot of this addiction thing going around. I don't know what they're talking about, I can quit at any time, really I can! Seems like a relatively new blog but already plenty of content on there. Again it seems like they attend plenty of tournaments so worth checking out. 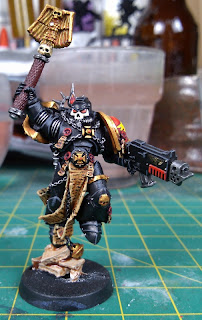 How To Lose at 40K
Regular readers will know I don't have any problems with that. Anyway, there are some great hobby "How To" articles here and some rule discussion that I'll be looking at as you all know it's something I'm keen on.

L33tlike.us
Some great articles about airbrushing, something I'm always tempted by but never get around to investing in. Anyway, there are some great posts here and they also have a lot of videos if you have the time to watch them.

Facing the Grey Tide
Finally another relatively new blog with a good deal of content already. Some great conversion articles including some about adding lights to models. I'll definitely be coming back to this one.

Right, that's all for now. I'll be adding all of these to the blog roll and hopefully their authors will return the favour. Apologies if I've missed the point with any of these but as I say I haven't had chance to browse them thoroughly.
Posted by From The Fang at 20:13:00