Building a Better Blog Wars: Part One - The Scoring System

I'm always striving to make the Blog Wars events that I run (solo I might add) the best events they can be. I can't pretend this is a purely selfless endeavour though because part of what motivated me to start running a tournament was how frustrated I got playing in poorly thought out events. Matt and I see Blog Wars as our version of a gaming club. We can't find the time to attend an actual club but there's a group of regulars at Blog Wars who we've gotten to know quite well over the last few years and it has a club event feel. If I'm only going to get to attend a club twice a year it'd better be the best club it can be. The other motivating factor is that a lot of people seem to make Blog Wars their first venture into the tournament scene. It may seem daft but I feel a responsibility to run a great event that will encourage them to attend more events in the future (including future Blog Wars of course).

What's wrong with the scoring?
With all that in mind I know that Blog Wars isn't perfect. There are always issues that you simply can't see coming until they happen. One of the things that came out of BW5 was that the scoring system was potentially flawed. What brought this to my attention was a comment on one of the feedback forms that someone had finished 20th despite winning all of their games whilst players higher up the rankings had lost one or even two games. This is an extreme example though of a system that, for the most part, worked how I wanted it to. The player in question had a particularly small "goal difference" of 4. That means, whilst he did win all of his games, he did so by a small margin each time. In contrast the player who came 2nd had lost his first game but scored 19-0 in his second game to give him an eventual goal difference of 22.

Clearly then, the system rewards players for winning convincingly. Sounds reasonable right? Well the problem is that winning should feel like winning. If you've fought long and hard for 7.5 hours in total to win all of your games despite some clearly close matchups, it's disheartening to know you were doing so for 20th place in a field of 30. The other part of the problem is that it isn't a level playing field because each game doesn't have the same maximum points available.

What do other events do?
Some tournaments run a simple system of, for example, 10 points for a win, 5 for a draw and 1 for a loss. They then record old 5th edition style VPs (let's call them blood points) as a way of determining how convincing the win was. This works for the most part but to me it misses the point of the mission in some games. In a kill points style game (Purge The Alien) the recording of  blood points works because it's probably closely linked to how many units you killed. However, in objective games it's a fairly meaningless number. Who cares if you destroyed all but 10 points of your opponent's army if that 10 point model is sat on an objective and taking the win?

The other, more obvious, problem with blood points is that it's a ball ache to calculate after you've just spent 2.5 hours concentrating. This was particularly obvious last Saturday in a roasting hot venue when I struggled to add up! To me it spoils the flow of the event and frankly people do it wrong anyway. The number of times I used to get score slips that say 702.5 blood points when the 5th edition rulebook clearly stated you round up. It's hardly a big deal but it does make you wonder if people are doing it right. I've talked before about the importance of simplicity in tournament rules and blood points are an irritation.

Uneven Maximum Points
There's a clear issue where the maximum points from a round are concerned. Purge The Alien always causes problems as if you're playing an army with only 5 points available you're unlikely to take much away from that game. You might think it isn't a problem in objective games but when you compare something like The Relic with The Scouring there's a vast difference between the maximum points available. If you do everything right in The Relic you can get 6 VPs from it compared with a potential 22 from The Scouring (5x3 for objectives, 3 secondaries, 3 primary detachment fast attack, 1 allied fast attack). This isn't a problem when comparing all the scores for game 3 of an event but winning that game becomes more important than winning game 2 which was worth less points. If you come up against an army that you've got not chance against then you could end up missing out on a ton of points.

The solution to this is pretty simple. Well there are three potential solutions actually. Firstly, write custom scenarios for the event which all have the same points available. Secondly, use a scoring system that gives points based on the percentage of the available points you scored. Finally, and this is my preferred solution, make all of the scenarios worth the same number of points.

I'll talk more about the process of doing that in a separate post about the scenarios but the aim is to make each game worth the same number of points.

Problem Solved?
People attending Blog Wars 5 almost unanimously found the system to be nice and simple to use. I'm keen to keep the same method. I've used BW5's results as a basis as tried fiddling with the numbers to get a more satisfactory outcome. Ultimately I want winning all three games to be worthwhile whilst also rewarding convincing wins. I've crunched the numbers with a few different ideas:


The results are shown below (click to make it legible): 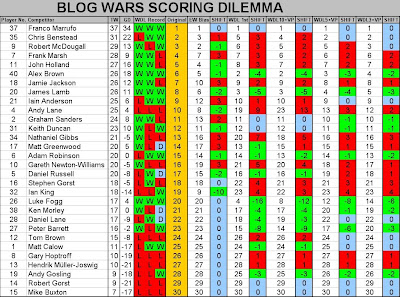 You can see that Franco wins no matter what and the bottom two don't change either. The results aren't really surprising. When you base it purely on wins (then sorting by VPs scored) there's a big shift in where some people place - I place second for example. Changing the points for Emperor's Will doesn't make a huge difference although this is difficult to properly simulate as in games were only one person captured an objective I obviously don't know which one it was they took. It do like the idea there though as it rewards people for pushing up rather than being content to hope for winning with First Blood.

Adding a, somewhat abitrary number of points for W/D/L isn't really a solution. There's a point where it works but once again you're still rewarding people for scoring more points than others when they won.

Conclusion
Winning should matter. Mind you, as frustrating as it is to win games and place lower than people who've lost one or two, it's equally annoying to come close to victory and yet only get 1 point instead of 10. I don't think you can totally fix the scoring system to allow both of these things to happen though. What I want to concentrate on instead is making each match-up worth the same number of points. More on that in the next post though.

I can't help but acknowledge that part of the problem is that having just 3 games means this sort of issue is more common. The solution to that is a two-day event but from talking to people it would put as many people off as it would bring in. There's also the non-40K aspect to consider, having a full weekend away from the other half isn't always easy and I'd be shattered after running a two-day event.

Before I finish there's an interesting idea from the people who run Nova. Granted, their system works better because they play 8 games over 3 days but something to take from it is the win-path system. Basically, they look at your previous form to determine pairings. First round is random and second is simple because winners should be playing winners etc. Third round is interesting though. The idea is that you pair up people who won their first game but lost their second. You then pair up people lost the first but won the second. These two groups of people are likely to be in a similar place mentally. There's nothing more demoralising than winning your first game only to lose the second and on the flip side it's a great feeling to win after being defeated in round one. Of course this doesn't make much difference in a 3-game event but it's interesting anyway.

With all of these Better Blog Wars posts I'm really keen to hear ideas and suggestions from people in the comments. Doesn't matter if you've never been to a Blog Wars or aren't likely to ever go. What have you liked at other events that you think could help?
Posted by From The Fang at 17:00:00