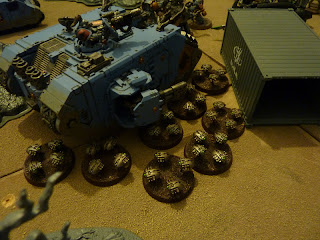 With the codex still warm from the presses Matt and I decided to put them through their paces. Jammy get that he is, he's managed to pick up a nice Necron army on eBay for a very reasonable price. This means he's already got quite a few of the old models to play around with and he's bolstered this with a few Dark Sphere purchases. Here's our lists:

The idea behind Matt's list being the much talked about Night Fighting that will protect the footsloggers whilst you get into rapid fire range. With both my Wolves and DE having Acute Senses/Night Vision I didn't think this would bother me much after turn one. 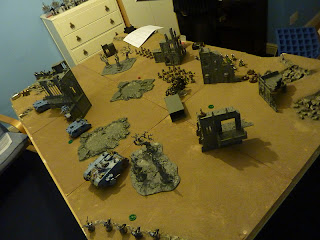 We randomly picked a Blog Wars 2 scenario and got the final missions with an attacker and defender and 5 fixed objectives. Matt won the roll off and elected the be that attacker deploying his 20 warriors and Imotekh (making them Relentless) in the middle of the board, C'Tan and Command Barge to their left. The Immortals went with the harbinger in some cover near the back and the 9 man warrior squad hung out on the right near one of the objectives. The flayed ones were in reserve with the Bloodswarms hopefully making them deep strike nice and close. I shoved my land raider just to the right of the middle with a rhino to its left, the other rhino on the left flank, speeder in cover and long fangs in decent firing positions. 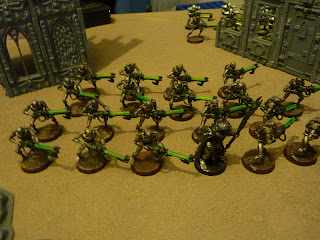 With Night Fighting in effect this was never going to be a particularly bloody turn. Matt advanced forwards but found himself out of range for most things.

In my turn I advanced the land raider forward and disembarked the terminators. The plan being to blow up the command barge and then hammer (literally) the overlord in combat. The assault cannons took care of the Quantum Shielding but could only stun the barge. Arjac and the melta terminators then managed to wreck it meaning Matt could happily position his Overlord out of my charge range leaving my terminators looking very exposed. The long fangs struggled to find range but the rune priest managed to "kill" a Necron in the 20 strong pack with Hurricane. The drop pod hunters came in near the 9 man squad and put two down. All there promptly passed their RP rolls and got back up!! Meaning I'd only killed an 80pt transport despite having Acute Senses to deal with Night Fighting! 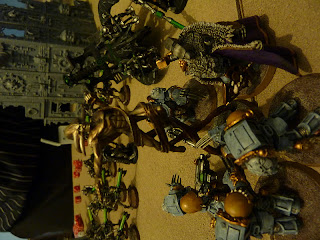 Imotekh failed his Night Fighting straight away much to Matt's frustration. He fired Imotekh's Staff of the Destroyer at my Land Raider in the hopes of hitting my terminators. Sadly it had a poor range and was wasted. This did mean that the 20 necron warriors could let rip with rapid fire gauss at my land raider. Matt scored an impressive number of 6s and my land raider was Stunned, Immobilised and had lost all but one of the flamestorm cannons. It was at this point I noticed the scarabs nearby! The flayed ones deep struck in near the 9 man squad to help them deal with the drop podding grey hunters. The Harbinger teleported the Immortals in front of the long fangs but they whethered the barrage of fire and two were left standing. The C'Tan killed the storm shield & chain fist terminator with his thunderbolt and then charged into combat. The terminators held up pretty well causing 2 wounds and tieing the combat. The C'Tan tried to use his Gaze of Death but failed to wound. The scarabs piled at my land raider and their Entropic Strike combined with automatic hits allowed them to literally eat it away, wrecking it without even rolling on the damage table!

In my turn one of the grey hunter packs charged at the flayed ones easily winning the combat and catching them in a Sweeping Advance to wipe them out. It was a similar story for the 9 man warrior squad leaving that side of the board safely in my hands (for now). With the lights back on the long fangs fired plenty of shots into the immortals but could only bring down a couple (despite hitting with 3/4 scatter dice rolls!). The C'tan killed another terminator but took another wound itself and failed again with it's Gaze. Elsewhere the Rune Priest failed his psychic test for Hurricane so Imotekh and co. could move safely again. With a couple of Matt's units gone I started to feel a bit more confident but there were still a lot of metal bodies to shift! 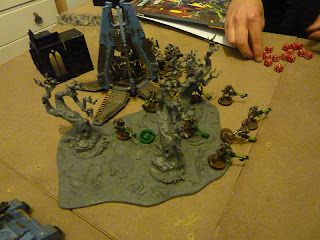 Imotekh's squad rapid fired the remaining drop pod grey hunters who were advancing towards them and sheer weight of fire was enough to wipe them out (thanks to Matt's jammy rolling I reckon!). The Immortals failed to kill either of the remaining two long fangs with only one wounding hit thanks to some less than jammy rolling by Matt! The scarabs charged a rhino which had the good sense to move at combat speed. This meant Entropic Strike only brought it down to armour 8 (on the rear) but that was enough for the 8 hits to penetrate and wreck it. The C'Tan and finished off the terminators after I failed to wound it.

The grey hunters emerged from their wrecked rhino and easily wiped out the scarabs in combat killing 6 bases and the rest with fearless wounds. The land speeder popped out from behind cover to remove the C'Tan's final wound with it's multi-melta. The grey hunters that had killed the flayed ones sat behind cover and with help from the long fangs tried to thin down the 20 man necron warrior pack.

Turn 4
The overlord charged in on the grey hunters and despite taking a wound managed to kill a couple of them. The immortals finished off the remaining long fangs, killing one causing the other to run off the table. Imotekh's warrirors could only shake the land speeder.

The overlord continued to be an annoyance killing off a few more grey hunters but now down to his last wound (the scarabs made the rune priest attack his own men - but he failed to wound). The grey hunters fired again at Imotekh but didn't kill many warriors. The land speeder retreated back into cover for some turn 5+ contesting. 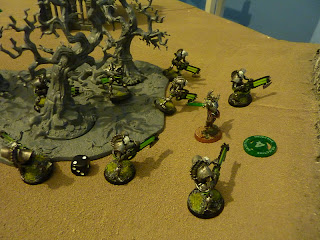 At the start of the turn it was still anyone's game. Matt's Immortals had control of one objective (but with a land speeder close by), Imotekh would fight grey hunters for another and depending on the outcome of the overlord battle I might be able to get some grey hunters back onto another.

I charged in with the grey hunters but without a standard I struggled to hurt Imotekh's squad. Some equally attrocious rolls form Matt meant the power fist won me the combat but we stayed locked. The fleeing grey hunters killed off the overlord with bolter fire (despite failing in 3 rounds of combat!!).

With one objective contested and the other in control of the immortals Matt would win if it ended here..... 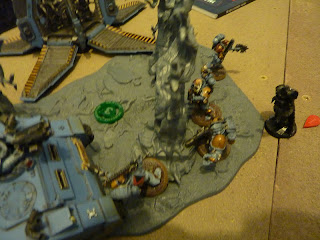 Luckily for me we got a turn 6! The Imotekh vs. grey hunters combat dragged on with some awful rolling again from both sides to hit and wound but decent rolls to save! The power fist failed to wound this time leaving it tied. The result of that combat would determine the game.

The long fangs fired at the Immortals but barely scratched them. The landspeeder sat poised to contest their objective if we got a turn 7. I moved the rhino into difficult terrain to contest the objective near Imotekh in case the combat didn't go my way. Thanks to the wolf guard hitting with his power fist Matt lost the combat by a couple and luckily for me failed his morale check. The hunters caught them in a Sweeping Advance and only if Imotekh got up could he stop the hunters from controlling the objective. He got back up on a single wound! Luckily for me he wasn't able to contest the objective though!

Conclusion
I'm going to talk about my impressions of the new book in a separate post tomorrow so I'll keep this brief. The early stages of the battle made it seem like the Necrons would be unstoppable. The land raider being eaten made the scarabs seem scary but they were easily dealt with in combat with grey hunters. The C'Tan held up brilliantly against the terminators and a large portion of my army was gone pretty quickly. Like any shooty army the rest folded in combat nicely and that was the only thing allowing me to snatch a draw. Had we got a turn 7 I would probably have won since the now regrouped grey hunters would control an objective and the speeder would contest the Immortals' one.

I think part of the problem fighting Matt yesterday was the combination of a footlist (which I don't usually play against) and an unfamiliar codex. This made it difficult to decide what was a threat and what wasn't. Looking back I'd have kept the terminators in the land raider for another turn and let him spend time wrecking it. This would've given me some more time to shoot the C'Tan. I'm looking forward to fighting the Necrons at Blog Wars 2 now and I hope I get drawn against them.

Overall I think it seems like a good book. It's definitely got it's strengths and so far I think the weaknesses are fair. We'll be playing plenty more battles over the next few months and I think that's the only way to form an opinion. As usual with a new codex people seem to get over-excited about the new units without thinking it through. I'll discuss this more in tomorrow's post though.
Posted by From The Fang at 17:00:00