Yesterday I hosted my third Double Trouble event (DT3: Double Harder). This was my 14th time hosting a tournament but only my second in 8th edition. Since all of the pairings are random in each round I'd decided to keep the mission the same in all three games and army selection as straightforward as possible. Players showed up with their 875pt force (in a single Battle Forged detachment) and we paired up with a new partner and two new opponents in each round. Once again the "helldoku" that I work through, to make sure no one meets the same players again, paid off giving everyone nine different people to throw dice with. A total of 30 people showed up with me standing in as the 31st and 32nd player to make sure no one had a bye. 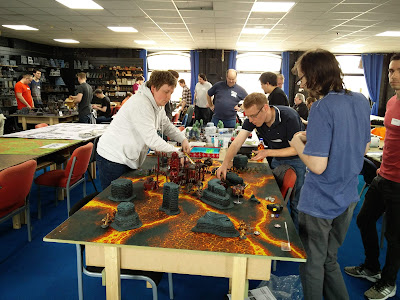 Those of you with long enough memories will remember that DT1 got confined to the dungeon under the newly refurbished NWGC but we had no such trouble at DT2 and once again got the NWGC in it's glory yesterday. Even though we were sharing the venue with an Imperial Assault championship it felt like we had the place to ourselves and there was plenty of space around the tables. I've not exactly toured the land but I really thing that Element Games have worked hard and invested significant capital to make it an excellent place to play whatever game you're into.

Hopefully those guys who came along won't tell me otherwise but I don't think the event could've gone much better. It ran pretty much perfectly to time, everyone showed up who I was expecting and I barely had any rules queries at all. It was a pretty relaxed day for all and despite being a touch on the warm side I can't complain about anything from my end. Please do let me know if you disagree though.

I'd upped the points to 875 each (so 1750pts total) to allow for a bit more space in the lists to bring some fun toys but I think most people were getting through their games in 2.5 hours. My first game only went to four turns but the other two went to the end. I'll report my games later in the week.

Results
As ever, come back tomorrow and Tuesday for the painting competition roundup but here are the results from the tournament: 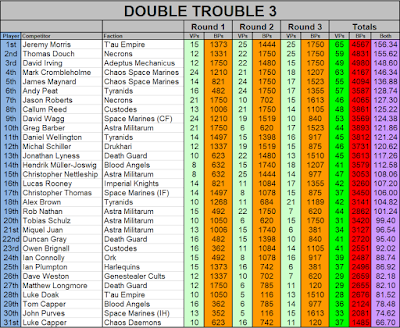 Clicking on the image should make it more legible. The positions are pretty meaningless as I separate out the awards for most VPs (Master Tactician) and most BPs (Genocidal Maniac). Jeremy Morris and his T'au winning the former and David Irving and his Ad Mech winning the latter. Propping up the table was Luke Capper who took home the "Nobody Loves Me Award" and a tenner in Element credit as compensation!

Jeremy put in a strong performance in both categories as did Thomas Douch who finished third on VPs and second on BPs with his Necrons. Mark Crombleholme as just two points short of the VP crown too. Special mention to Rob Nathan who managed to jump up from bottom at DT2 to just below mid-table. 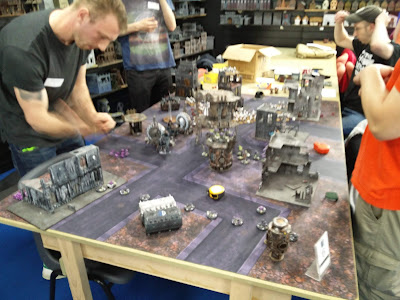 As ever, there were far bigger prizes to be won in the raffle with Tom Capper (apologies if it was Luke) taking away a Imperial Knight Valiant worth £100 RRP and further prizes of Armiger Helverins, Sacristan Forgeshrine, Webway Gate, Munitorum Containers and the new IK codex handed out to people just for showing up. Finally, I decided to add a bonus prizes of a Start Collecting kit of the winner's choice to the winner of a mass roll off! 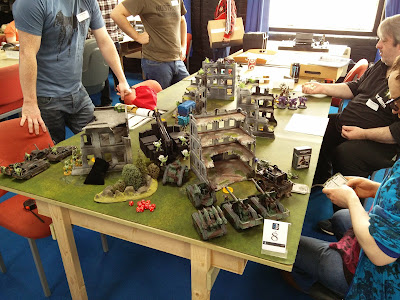 Look out for more round up posts later in the week but to finish I'd like to once again say a massive thank you to all of the guys who show up to my events and really enter into the spirit. This game, and it's tournament scene in particular, often gets a bad rep for the attitude of the players and I think we consistently prove that it doesn't have to be like that. My original vision for friendly events where everyone enjoys themselves is only achieved because the guys who attend want the same thing. I'd also like to again thank Element Games for such an excellent venue with friendly staff. Table service should be standard at these things! I only wish my FLGS shared their philosophy for making a top class venue instead of worrying about the cost. Remember you can support From The Fang by buying your miniatures from them. It doesn't cost you any extra and in fact they'll save you a good chunk off RRP. 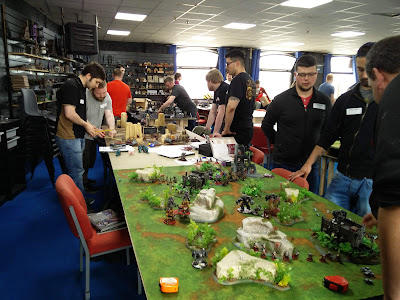 Finally, my next and final (dum dum durrrrr) event will be held at the NWGC on September 1st. I've not decided on the format yet so keep an eye on this blog and the Double Trouble 40K group on Facebook for more news.
Posted by From The Fang at 20:56:00