Following on from my last post, here's another update on my progress towards getting a pair of Imperial Knights ready for an event on March 12th. As I mentioned before, these knights are for my custom knightly order, House Tangryx. I'll have to flesh out their background at some point but basically they're name is a more knightly version of Tango since they follow that general colour scheme. I also like Kirstyx as a tribute to my wife but I'm not sure she'd be so thrilled with the idea. Anyway, I was away over the weekend which limited my progress somewhat but I have still managed to get quite a bit done this week. 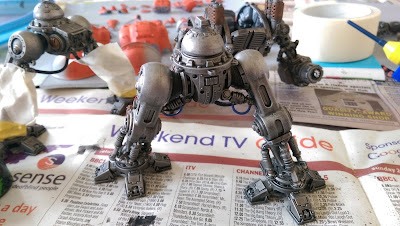 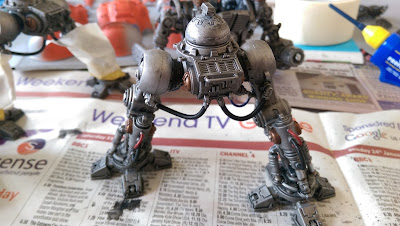 First off I've added quite a few bits of detail to the legs including the pistons which I hit with a couple of coats of Runefang Steel before washing the top and bottom with Agrax Earthshade to try and make them look like they were polished from use but still oily. I've also finished off the brass bits which were Balthasar Gold, Agrax Earthshade and then a drybrush with Balthasar Gold again. I'm tempted to add some Hashnut Copper but I don't want them to stand out too much on what is otherwise a fairly grimy skeleton. Looking at this picture now I'm feeling the need to hit the tops of the legs with some fine emery paper to get rid of the join but that'll be time dependent I think. 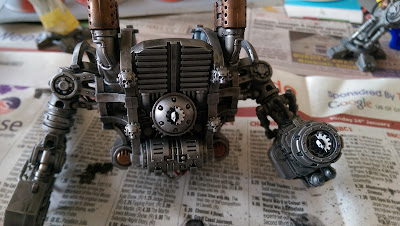 Next step was to paint in a few of the Mechanicum symbols. They need a bit of thinned down Badab black on the white bits to tone them down a bit but I'm pretty happy with how they came out. I'm torn on the smaller emblems. My worry is that if I paint all of them it'll look to much on the back. My current plan is to wait until the armour panels are in place and see how I feel then. 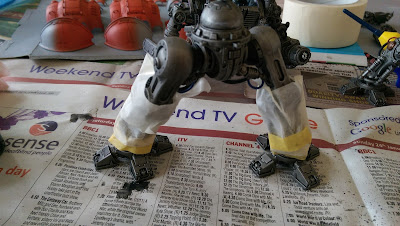 Masking time. It's times like this I really wish I'd left more parts off during assembly as it's difficult to mask around some of these irregular shapes. The feet for example could've easily been left off, sprayed orange and attached later. Live and learn I suppose. Anyway, I also masked off the side armour panels on the skeleton and a couple of bits on the rear as I'd like to add a bit of orange here too. Finally, the chainswords get some masking around both ends. The box (for want of a better term) on the back will be orange whilst the blade will be yellow and cross hatched with black (still working out how to mask for this as Tamiya don't seem to do 3 mm masking tape - although I have just found some online). In case you're wondering I use Tamiya 10 mm close to the detail and then good old B&Q stuff for masking the rest. I actually wrapped all of the rest of the legs up to be safe as you'll see later. 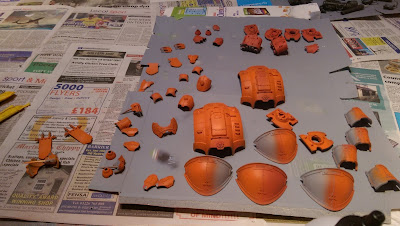 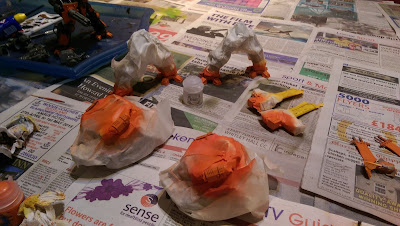 All of the panels which had been based with Wild Rider "Red" now get some Troll Slayer Orange. Incidentally, my long term plan is to have a Ryza Ad Mech army but I just don't like Jokaero Orange. Anyway, here's the shots of the skeleton post tape removal. Sadly some of the masking wasn't perfect so there'll be touch ups to do but generally speaking I think I got away with it despite wishing I'd left some more panels off! 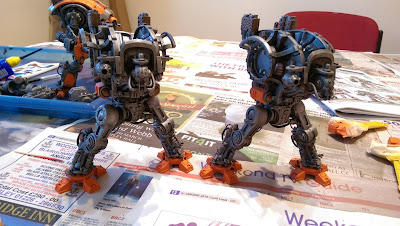 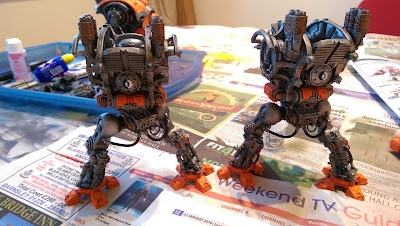 Next step is more masking of the panels to get some black on and I'm planning on white stripes over the top carapace. It's at this point that I wish I'd not glued the hand rails in place as it would have made the masking MUCH easier! That fourth knight is going to be a breeze though!
Posted by From The Fang at 17:00:00