Well, my last post apologised for my lack of blogging and a two week gap between posts certainly isn't bucking the trend! The main reason for this is that I'm determined to get my Imperial Knights finished in time for a tournament in a month. That means my free time is better spent painting than blogging! Anyway, I'm taking a break tonight since I've reached a decent milestone. I've managed to assemble and fully magnetise a couple more Knights and I've undercoated them today.

You may remember my previous guide on how to magnetise the knight kit. The most shocking thing about that post is that it was June last year and the knight featured isn't close to finished. That's not promising for my current target. Anyway, I've done a few things differently, and hopefully better, with the new knight that I thought I'd share with you.

Polarity Solution
The first thing I want to talk about was a recommendation from Ian "Ginge" Connolly that I've made full use of and wanted to share. Ian used a couple of blobs of green stuff marked with + and - but I opted for this: 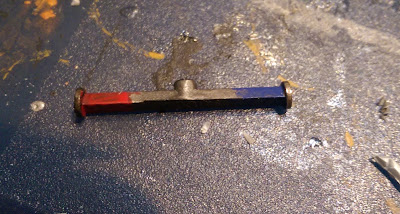 Quite simply a bit of sprue (plenty of that to hand!!) with a magnet glued on each end. I had blue and red paint in easy reach so daubed some on each end and voila! The red end I always use for weapons (or outer bits) and the blue end for mounts (or inner bits). This has saved me absolutely ages! All my other projects have very often hit snags when magnets ended up flipping the wrong way up and had to be removed. Having a consistent scheme really helps too. Means that all of the weapons are interchangeable between the two knights (though sadly not the first one - more on that later) and generally less swearing on my part. If you do any amount of magnetising make one of these (or something similar) NOW! Thank me (and Ian) later.

Bigger Magnets!
One thing that bothers me about the first knight I magnetised is that the arm weapons joints aren't as strong as I'd like. The front parts of the battle cannon/thermal cannon aren't a good enough joint and the shoulders don't take much persuasion to come apart. One of the things that puts me off magnetising generally is an army that falls to pieces many, many times during a game. I don't want to be rebuilding my model every time I move it so something has to be done.

The first solution was suggested be Westrider in the comments of the last post and that was to sink the shoulder piece into the elbow by simply trimming off the lip rather than the whole bottom of the joint. This was what I originally started out intending to do. I think it would've worked reasonably well but I decided halfway through the assembly process to simply go for bigger magnets. I was previously using 5 mm magnets but increased these to 10 mm magnets (still 1 mm thick). This gives me four times the area and therefore a much stronger hold. Trouble is, a 10 mm magnet doesn't fit into the top of the elbow. I could potentially have drilled them out to accommodate the magnet (or used something like an 8 mm magnet) but I eventually reasoned that it would be much easier to simply glue the magnet on top of the elbow and you're never going to see the joint during a battle anyway, especially when painted.

One thing to note though, in order to get a good bond with the magnet I filed down the top of the weapon joint and bottom of the shoulder joint to ensure a better contact. This also helps rough up the surface which improves adhesion (or seems to anyway). These bigger magnets are much less fiddly to use too. 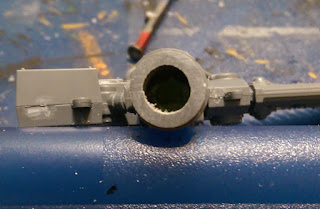 Whilst I was embiggening things I decided to increase the size of the magnet on the body for the meltagun/stubber from 3 mm to 5 mm. I kept the smaller magnet on the weapon itself but just increasing the magnet on the body has vastly improved the strength of the joint. Incidentally, one of the things I didn't like about the technique before was that the melta/stubber sat too low relative to the top carapace. I therefore trimmed the peg right down to the joint and glued the magnet straight onto the bit that sticks off the body (see below). 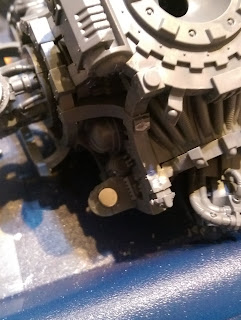 Armour Plates and Pistons
One of the tips right at the start of the last post was to avoid gluing armour plates on before painting to speed things up when airbrushing. Well, I did this to an extent last time but it wasn't until I actually started painting that I realised there were quite a few more areas that needed to be orange that I hadn't considered. For example, the shields on each of the ranged weapons and the little cover thing behind the meltagun/stubber barrel. On my first knight I ended up having to paint all of the metal parts of the gun and then mask off these whilst I sprayed on the orange. This time I'll spray all of the orange bits up first. The only exception that I can think of is the feel which, with hindsight, I could've left off too.

Similarly, I've waited to glue a lot of the pistons in place until it came to posing the final model together before spraying. It's not practical to keep them unglued as GW indicates in places but I wanted to be able to think about the pose of the knight before glueing them in place.

I've primed all of the (many many) components and sub-assemblies now so all I need to do is separate them into metals and oranges before I start spraying. Once all the airbrushing work is done I can glue more stuff together so that the painting is a bit more cohesive but it'll save me ages not masking and correcting.

What Didn't Change?
I was tempted to replace the waist joint with a 10 mm magnet too. I think they'd be strong enough but I actually like my twist mount solution so I've replicated this on the new knights. I do have concerns about the longevity of this method though so I've made the hole bigger to minimise the risk of pulling the sprue off. I might end up swapping these out for magnets at some point but I don't think that'll be a big job.

The method for the meltagun/stubber and carapace weapons has stayed completely unchanged. I did find it fiddlier to magnetise the missile launcher fronts this time though so might revisit them at some point. Generally speaking though it works pretty well mostly due to a good fit before magnets.

The battle/thermal cannon swap mechanic has stayed the same too (although bigger magnets for the face plates as mentioned above). I'm really pleased with how this works and I really don't think anyone will notice the bits that are extra for the battle cannon at the back.

As I mentioned last time I saved quite a lot of time by not attempting to magnetise the shoulder carapace. By magnetising the shoulder joints I can glue the carapace in place and still manage to take the shoulders off. I can't see any need to do this though since the weapons are fully interchangeable now.

Conclusion
One final tip before I wrap the post up. If you're working in a reasonably small room like me then remember to crack a window open with all of those glue fumes in the air. I ended up with a headache one night after applying A LOT of magnets. Given the time of year though I resorted to my airbrushing filter mask on subsequent nights to avoid freezing.

Well, generally speaking I'm a lot happier with the new knights than I was with the old one. It's frustrating really to think about redoing some of the magnets on the first one but it'll be worth the effort I think. The shoulder joints would be easy as I'd simply prize off the existing magnets, file down and glue on the bigger ones. Will be doing that at some point for sure. I could definitely improve on things again but with only one of my four knights unbuilt I probably won't go too mad. These latest two are certainly stronger and more durable so that's a definite bonus.

Anyway, I hope this post has been useful for anyone who's planning on magnetising their knights. I'd definitely encourage people to upgrade to bigger magnets too. I think I bought 50 10 mm magnets for a fiver so we really aren't breaking the bank.

Right, less bloggy more painty. I'll try and post some progress but don't expect me to talk about much else for the next month! Incidentally, I'm trying to work through some emails regarding Double Trouble so please bear with me if I haven't replied to yours yet. Wish me luck with the painting!
Posted by From The Fang at 23:15:00