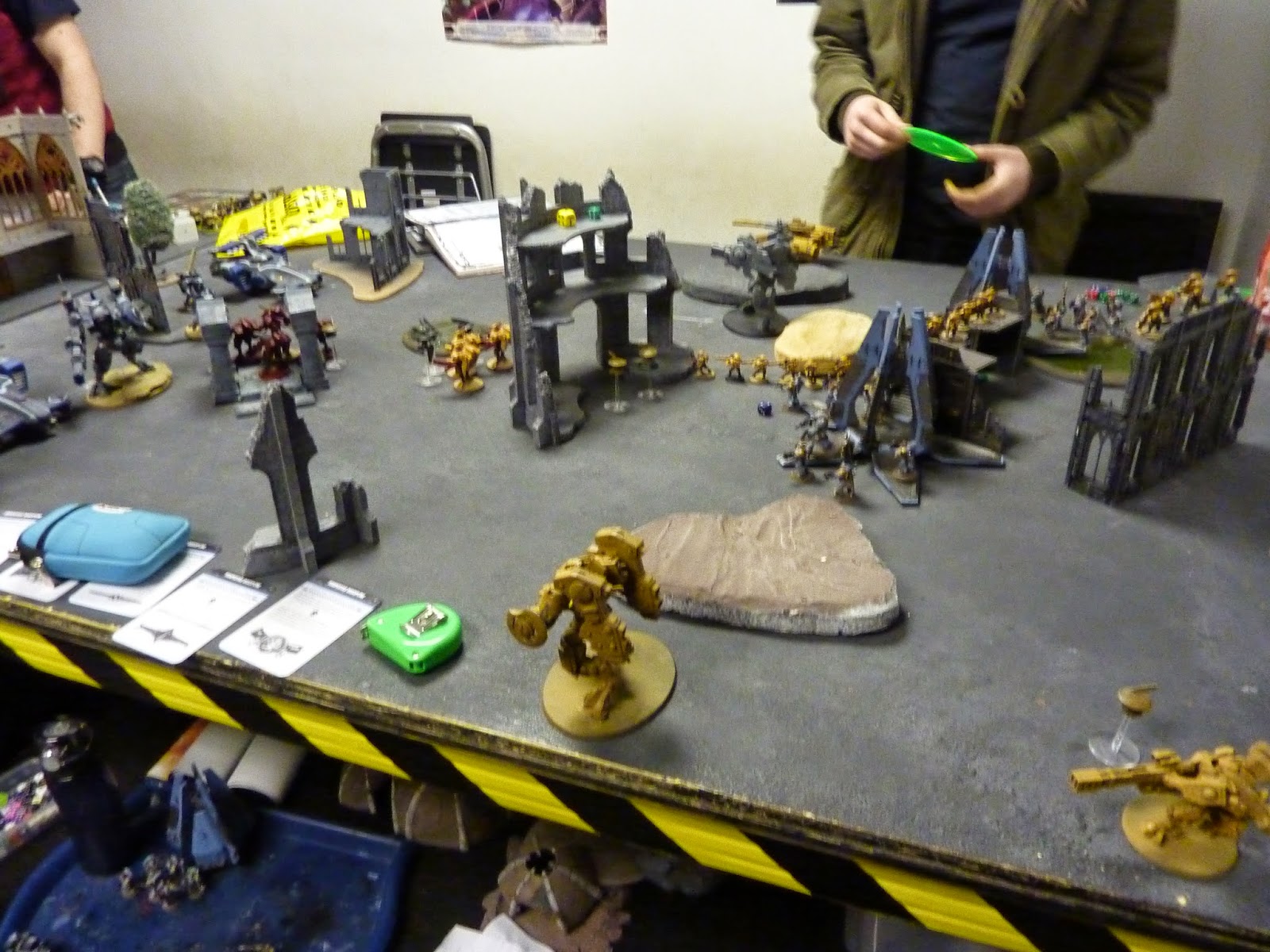 In a complete departure from my usual army building I actually decided to run an allied army at a tournament! I've never really been a fan of allies but figured it was probably about time for me to get over it and dive in. I also rarely make use of psychic powers so thought I'd dabble with those too! Here's my list:

Apologies for the blurry photos in these reports. I was taking them quickly so I wasn't pissing off my opponents too much. 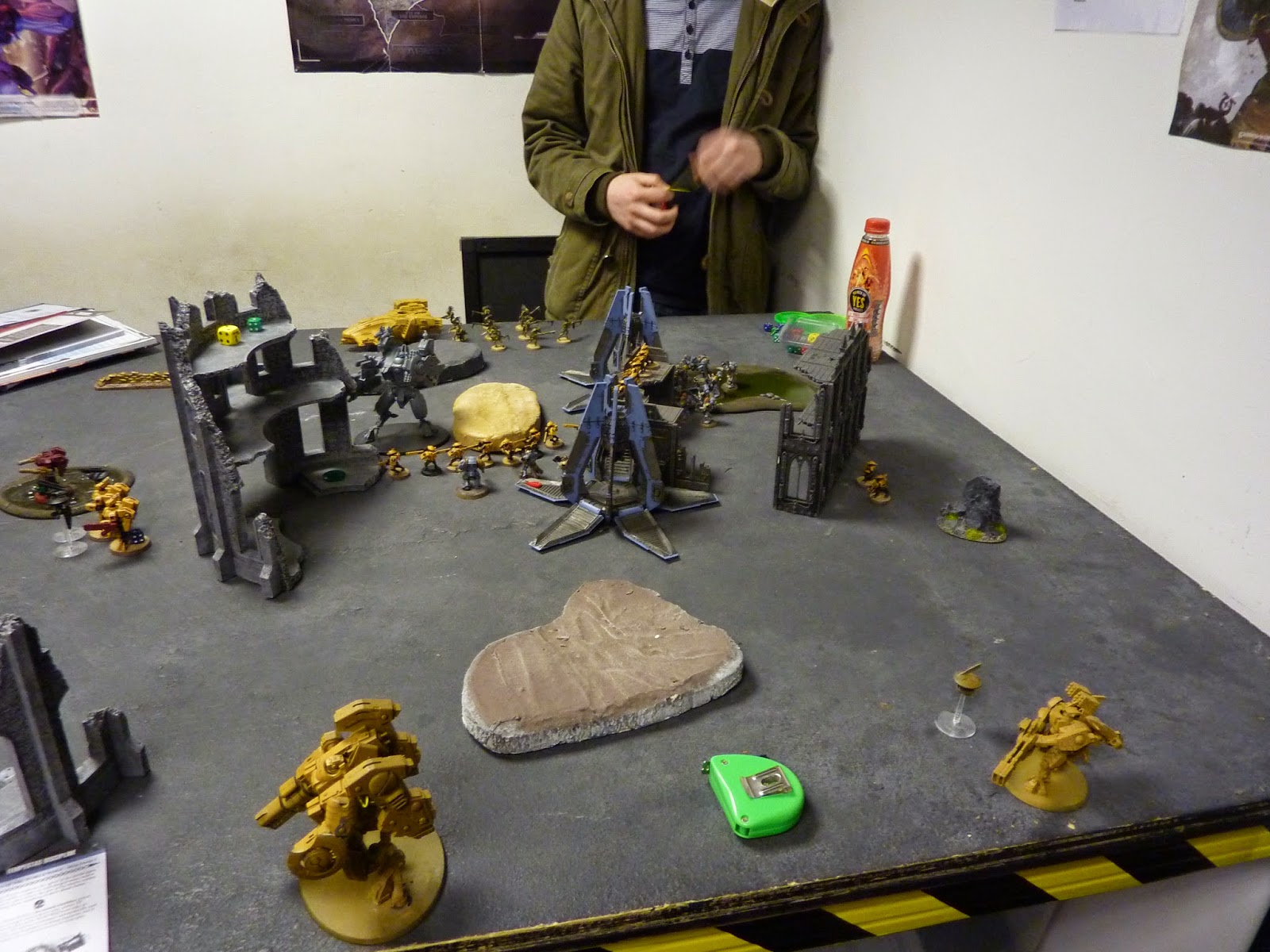 My first game of the day was against Tom Roberts' Tau (Farsight Enclaves). This being probably the first time I haven't run a pair of riptides it was frustrating to come up against them in my first game. Tom also had a couple of solo broadsides, a hammerhead, some fire warriors, two squads of pathfinders and two lots of crisis suits (one plasma, one fusion) with a stack of drones each. We'd be playing Big Guns on Hammer & Anvil.

My first turn was a damp squib, with the grey hunters dropping in but failing to kill a hammerhead and only killing a couple of fire warriors. The rune priest did kill a broadside with Jaws though which was fun. My opponent on the other hand was doing a decent job of thinning out my grey hunters and killing off my marker drones. His crisis teams scattered on arrival though which probably saved a Skyray from fusion death. The buff commander wasn't so lucky with the weight of plasma fire bringing him down quickly. 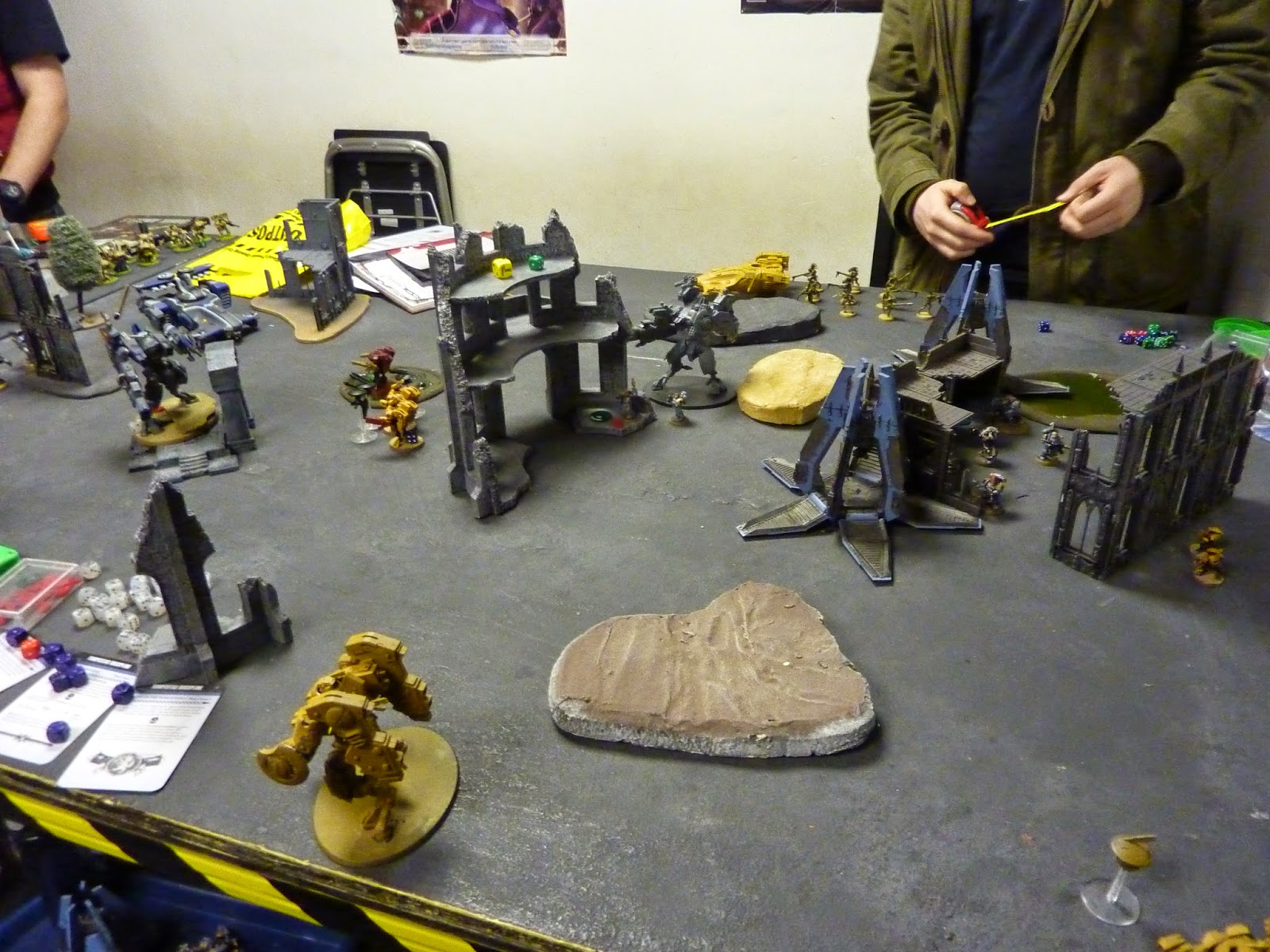 My second turn really turned things around though. One unit of Kroot arrived behind the hammerhead (which had sped off from the Grey Hunters). I declared the shooting but my opponent decided to risk it and not Jink (with disruption pods for 3+ too) thinking I was unlikely to get three 6s which, of course I immediately did. The Grey Hunters turned their attention to the pathfinders with the rune priest killing off three with Fury and causing them to flee before charging into the other unit and wiping them in combat. The other, much depleted, Grey Hunters charged the fire warriors and stayed locked.

I was struggling to bring down his Riptides though with their 3++ (from Nova) and FNP. The suits had FNP too but sheer weight of fire was enough to bring them down and Farsight suffered a seeker missile to the face. In the end my opponent made it pretty easy to ignore the Riptides though as he targetted my Kroot with their blasts and stayed away from the objectives. With all four objectives at the end of the game, Warlord, Linebreaker and two bonus points from heavies, I scored a whopping 16 VPs. Not a bad start to the day. 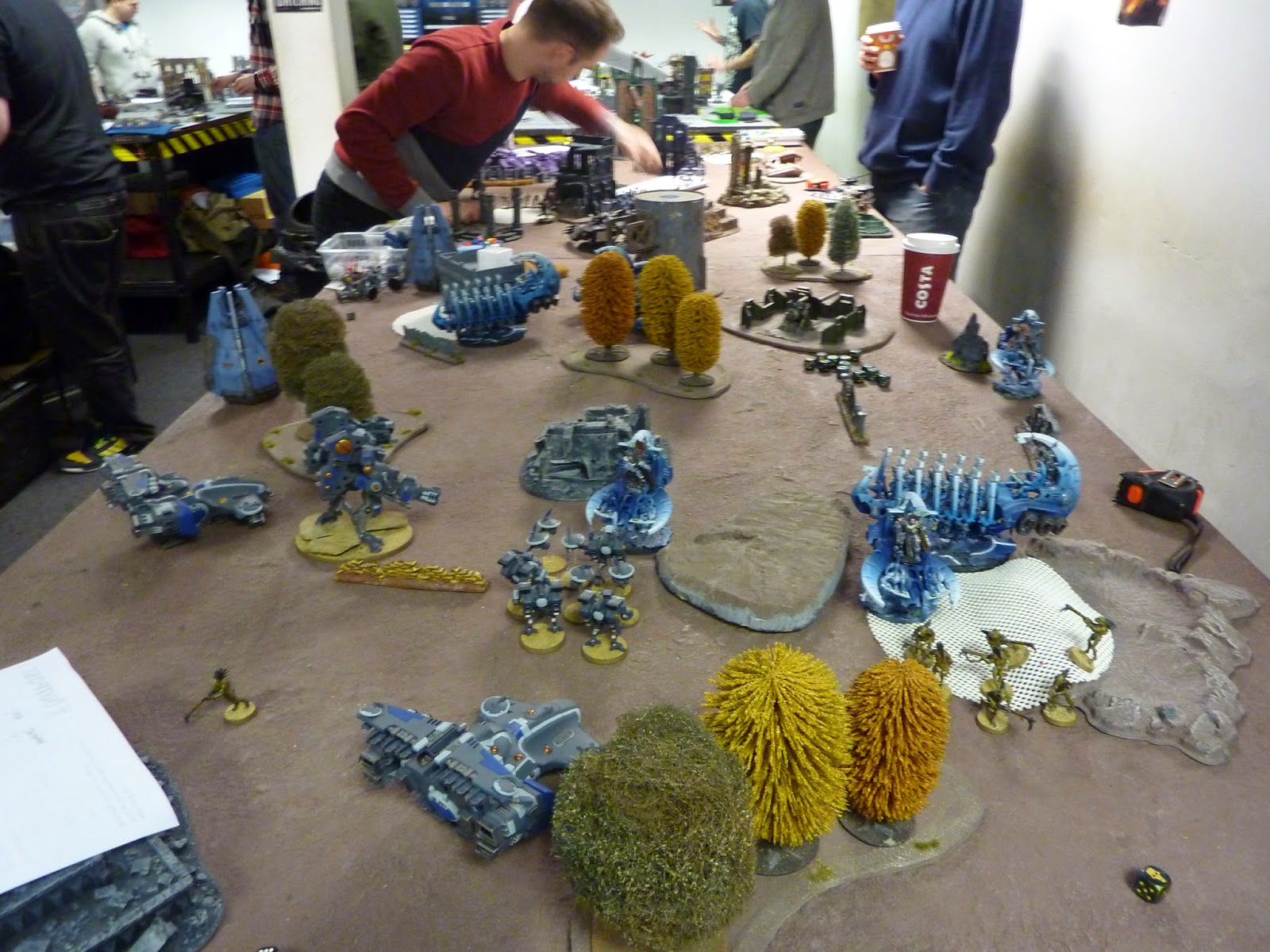 I'd made the mistake of scoring too many points in my first game and found myself on the top table against Chris Scothorne (Scoffer)'s Necrons. I've played Scoffer a few times before and I think it was something like 2-1 to me so far. That being said I'd need some luck to beat his two command barges, two ghost arks, three annihilation barges and two night scythes (one warrior, one deathmark). We were playing a mission that used the old table quarters deployment with the central 12" circle of no man's land. There were two 8" circular control zones in the other quarters which scored points for control at the end of your turn (1 VP for the one in your half and 2 for the one in theirs). 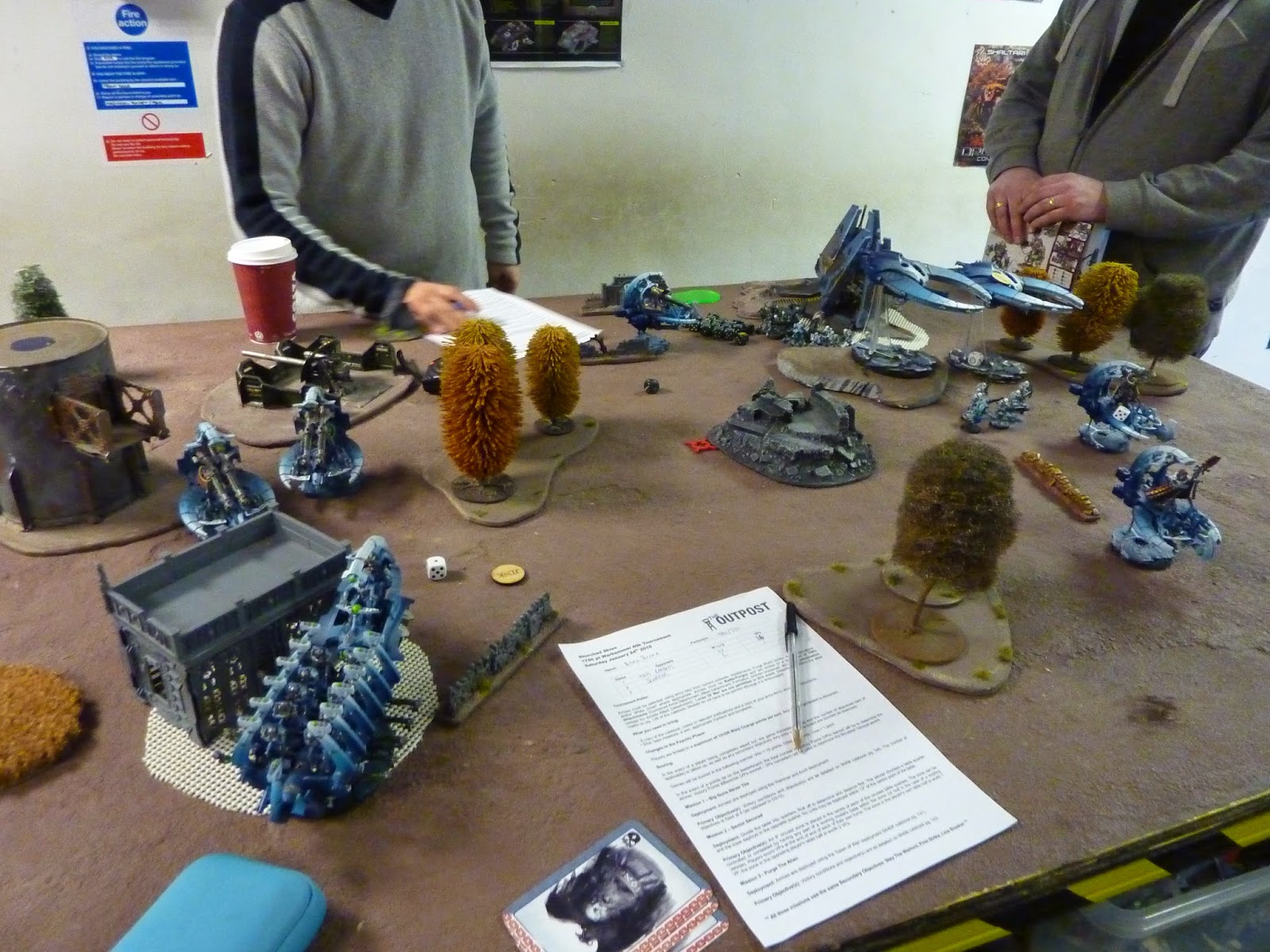 Remember I said I needed some luck? Well I managed to get first turn but, as I feared, Scoffer stole the initiative. To make matters worse the deployment allowed one of his command barges to only need 6" to charge my crisis team and the other needing an 11" charge to my Kroot who'd infiltrated into the control zones. The 6" charge he made easily but fortunately I managed to lose the combat and run (to regroup next turn). The 11" charge he rolled a 6 and a 1 for but thanks to the chariot rules he was able to re-roll the 1 to a 6 and make it! Where's that luck I needed eh? The Kroot lost the combat and ran whilst the other unit was cut down by a ghost ark and two annihilation barges. Not particularly devastating losses in themselves but it gave Scoffer a 3-0 lead after his first turn. My drop pods came in but were underwhelming thanks to missed melta shots and Jink saves. The crisis team regrouped but Snap Shots weren't enough to help them with the command barges.

There's little else to say about this game really. Eventually the barges used their sweep attacks to take out the Skyrays. The Riptide charged one of them but kept missing his Smash. When he did hit the invulnerable save protected the barge and the Riptide died. The barges then moved onto the crisis team with the deathmarks and warriors dealing with the Grey Hunters. I allowed Scoffer to hold off tabling me so he could get as many points as possible. Might sound daft but it would mean someone else wouldn't have to face him on anything but table one. 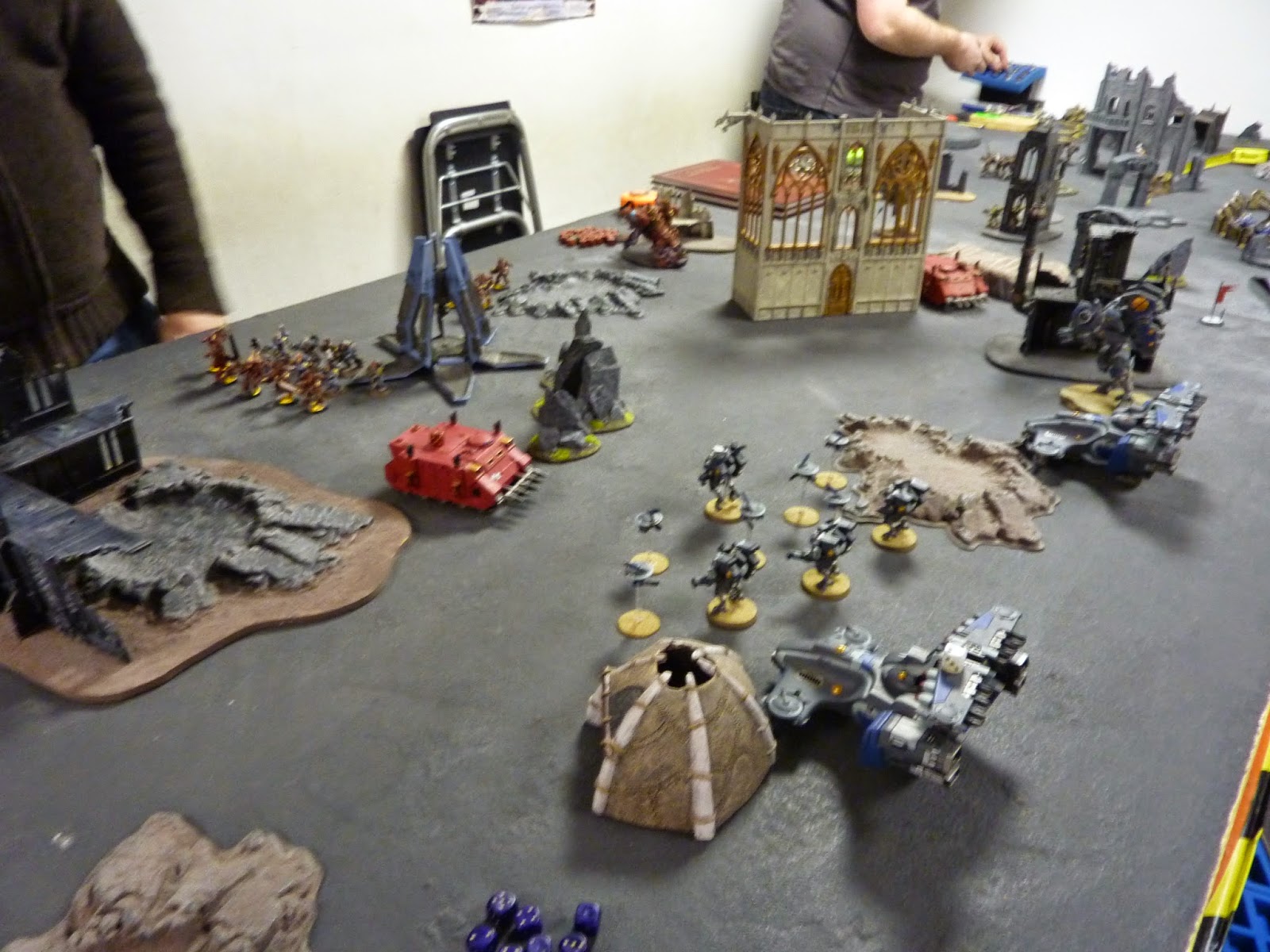 I was smacked back down to table 7 where I found myself across from Rick Miller and his Khorne CSM. He'd got 4 units of berserkers (two in rhinos, one of which had Kharn), a maulerfiend, vindicator, heldrake (hades) and some warp talons. We were playing Purge on Dawn of War.

This was a mismatch on paper and Rick's dice certainly didn't even it up. I took first turn with my pods coming down to get weapon destroyed on the vindicator and kill and handful of berserkers with the other. The riptide and marker drones combined to vaporise some more berserkers and the missile team (with skyray assistance) killed the maulerfiend for First Blood. The berserkers took their revenge on one unit of grey hunters with two units charging at once to cut them down. This was just about the only bright point in Rick's game though as by the end of turn 3 I'd all but tabled him. He had some terrible luck with his saves and heldrake reserve roll. The warp talons were gunned down by Kroot and the riptide just kept killing swathes of berserkers with pinpoint accurate blasts with Ignores Cover. It was all over pretty quickly with me feeling immensely guilty for taking another 16 VP win.

Conclusion
My overall score was only good enough for 9th place but not bad for a list I'd never used before with allies and psychic as two mechanics that are new to me. You'd think it wasn't a big deal but I did try to markerlight a unit for my Grey Hunters at one point as I never normally have anything but Tau with my Tau! Generally speaking all three games were horrible mismatches. The first game was the most even on paper but Tom was pretty new to tournament play and I was able to score far more points than I perhaps should've done.

I enjoyed using psychic powers for a change and allies weren't as bad as I thought. I might start using both more often in my lists. We've booked in for our next Outpost tournament too but this time it'll be X-wing and the Store Championships!
Posted by From The Fang at 20:50:00