Whilst I'm personally a big fan of the "Control Freak" mission at Blog Wars (which has 3 central control points that score every player turn), I'm aware that some people find it frustrating (and even boring) depending on the army they face. In the interests of constantly trying to improve the event, and also to prevent it from becoming stagnated, I'm keen to try other things. There have been some suggestions that I should introduce Maelstrom missions into Blog Wars. I've previously been reluctant to do so as I think they're a little too random and you can sometimes feel like you've been beaten by your deck rather than your opponent. However, the Blog Wars ethos is to try to take the existing rules of 40K and subtly adjust them to make them more enjoyable whilst trying to embrace them as fully as possible at the same time. Here goes then.

I'm not going to replace all three missions with Maelstrom so the way I see it there are two ways of introducing Maelstrom missions at Blog Wars. Firstly I could use a system like the ETC whereby Tactical Objectives are a secondary objective in every game. We played this at the recent team event we attended and, despite my initial fears that it would be too hard to keep track of two missions at once, I actually found it worked pretty well. Even so, I do think that it's perhaps a little overcomplicated for a friendly event like Blog Wars though. The other way to introduce Maelstrom (and the one I'm going to employ) is to simply swap the last mission for a Maelstrom mission. This has a few advantages. It changes up the final mission that seems to be a bit of Marmite issue, keeps the "score every turn" mechanic (which is a welcome break from frantic final turn shenanigans) and finally, makes use of a system that hopefully most players are familiar with. The final point there is important as, knowing that people don't read the rules pack sometimes, they'll still be able to get into their game quickly and feel like they know what they're doing.

There you have it then, the final mission at Blog Wars 9 will be a Maelstrom mission.

It's not quite that simple though. As I said I'm not a fan of the system in its current form so it needs a bit of tweaking to make it work. Ideally I'd like to have a system where the maximum number of points available for the round is 33 (as in the other rounds) so that you don't feel too shafted if you end up with a bad draw in the final round.

Tweaking the Tactical Objectives
The system we used at the team event caught my eye as a means of making the Tactical Objectives seem more "balanced" (inverted commas essential there as 40K is never truly balanced). I'm not totally sold on everything they've changed though so I'm going to use their method as a template for coming up with a Blog Wars system. The first thing they did was to clarify how Maelstrom missions work:

I'm not so keen on the two objectives each turn but it makes sense in the missions where you could have six cards on the table and feasibly score all or most of them. I'm intending to limit it to three cards generated per turn anyway though so I don't think that'll be an issue. Discarding unachievable ones at the start of the game is a good idea. This only applies to completely impossible ones like "kill a flyer" if your opponent doesn't have any and not to ones that are simply highly unlikely such as "control objective 5" when that's deep in your enemy's deployment zone and you're using a slower army.

They also subtly altered the wording on some of the cards to make it more reasonable. The most common change being replacing D3 VPs with simply a fixed 2 VPs, which again I'm a fan of. The random nature of Maelstrom doesn't need to be made worse by introducing dice on top of cards on top of dice!

Finally, they've also cut the deck in half so there's 18 cards (i.e. a D36 roll) which feels like a good number to me as it means you can have a rough idea of what cards might come up without needing Vegas style card counting skills. To do this they've ditched two thirds of the "hold an objective" cards leaving just one card for each of the 6 objectives. That's a pretty good start I reckon as you can end up with a daft situation where you get three cards for the same objective which again feels like the deck has won the game for you. That leaves us with 24 cards and therefore 6 more to get rid of. Their system loses 41, 43, 46, 55, 56 and 61. Let's have a quick look at those cards they ditched to see if I agree with the cuts.
Just Hold the Line (43) that I think could stay out of that lot. Otherwise I agree with their cuts. Let's see if I agree with what they've kept.

I think I'd be tempted to reinstate Hold the Line (43) in favour of Hungry for Glory (54). If I'm ditching Demolitions (65) I'd still need another card in but I think this is where the Blog Wars factor comes in. I could introduce a new card that gives 1 VP if you kill your opponent's "Commander" special character. Here's how I'd see the deck shaping up for Blog Wars then: 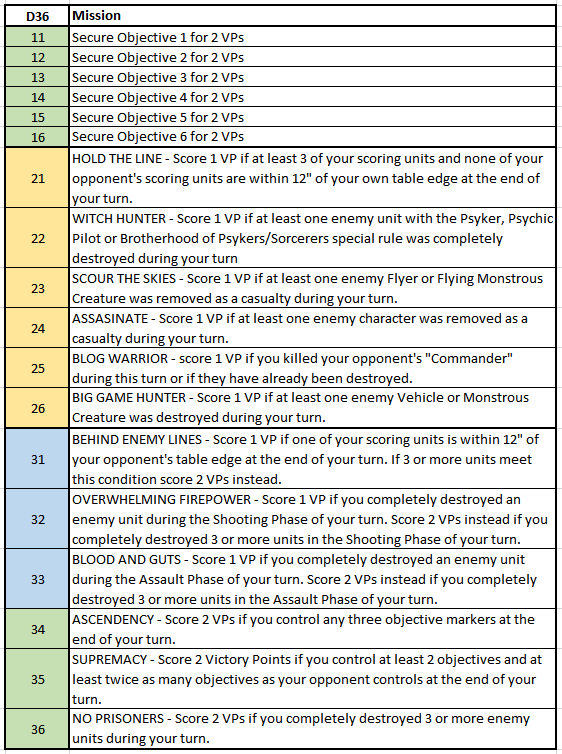 The colours down the side highlight that there are 6 cards worth 1 VP each (orange), 3 cards worth 1-2 VPs each (blue) and 9 cards worth 2 VPs each (green). If the game is limited to an automatic six turns it should make it possible to have a maximum score of 33 (including the 3 secondary objectives) but this is only with the Secure Objective cards being worth 2 VPs each which I'm not sure about. Of course, you'd still have to achieve all 3 missions in each of your 6 turns for the full 30 but it isn't totally impossible. This chart will feature on the scorecard for the tournament but I'm toying with the idea of producing custom decks to be issued to everyone to make things easier (and to help me test out the system before the event).

Conclusion
Ultimately I want to keep the semi-random feel of Maelstrom without it feeling completely unpredictable to the point where it rewards look rather than good generalship. I'd be running this as the last mission of the day using Cleanse and Control (p.148) but I'd use Dawn of War deployment to keep things simple. This is by no means set in stone yet because, as ever, I really want to hear your feedback especially if you're thinking of attending (but even if you're not). I want to put a bit more thought into how to make it a maximum of 33 VPs available. I think it'd be pretty straightforward to achieve but it's a task for another day I reckon.

Finally, tickets for Blog Wars 9 (which is on Saturday June 6th) will be up for sale in the next few days so keep an eye on the blog to grab yours. Remember it's open to anyone, not just bloggers.
Posted by From The Fang at 17:00:00