The Winter Scenery Project (Part 2 of Many) - Snowy Test Piece 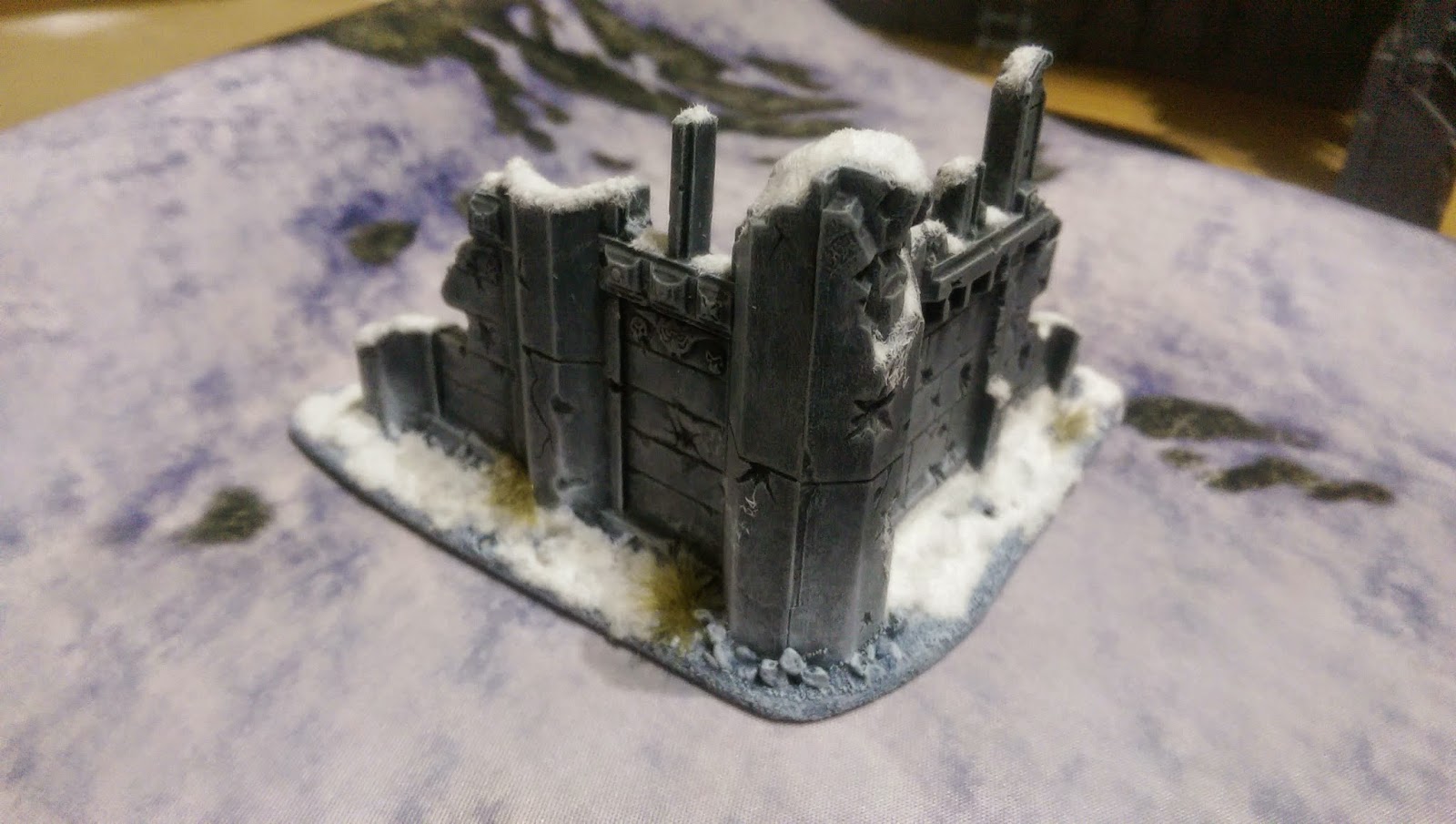 As you read in my last post I'm working on getting my scenery up to scratch. The aim is to have a good quantity of scatter terrain to work with my Alpine F.A.T mat and give me plenty of variety in my games. I think two tables' worth of scenery would probably be enough to create enough combinations and therefore prevent boredom. This project is motivated by my current boredom with the same scenery I've been using for years. I want to start by painting up the pieces I've already built but for some variety I'll probably make a few new pieces to break up the tedium of painting my old stuff.

Anyway, today's post is about my first test piece for a snowy look. Of course I'm trying to tie the colours in with the F.A.T mat but it doesn't matter too much. I've never made anything look snowy before so I'm just going with my gut. I'm intending to do a bit of YouTube research to see what others do but I want to find a technique that I'm happy with. That basically boils down to maximum results for minimum effort.

I decided to start with some of the 3rd edition corner ruins. Mainly because they're small pieces but also because I'm not too worried if I make a mess of them. The ruins themselves were already painted which took all of about half an hour (albeit a while ago). The bases had sand and rubble (gravel) but just Chaos Black primer in terms of paint. I started with a basecoat of Shadow Grey then an overbrush/heavy drybrush of Space Wolves Grey followed by a lighter drybrushing of  Ceramite White. Incidentally I went for Ceramite White over White Scar as it's a bit thicker and hence lends itself better to drybrush work. You can see the results below with one of the other ruins as a before and after comparison. 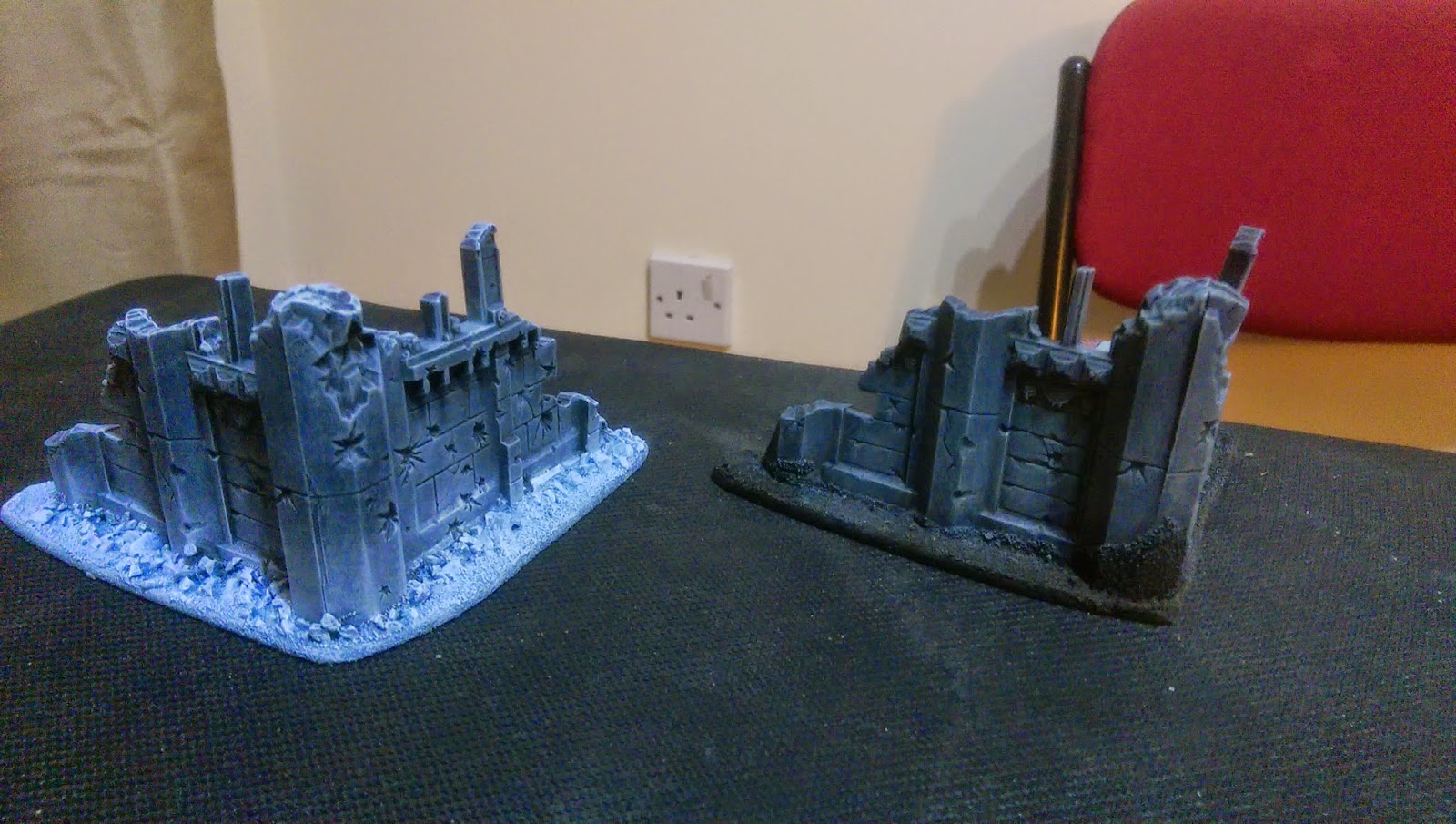 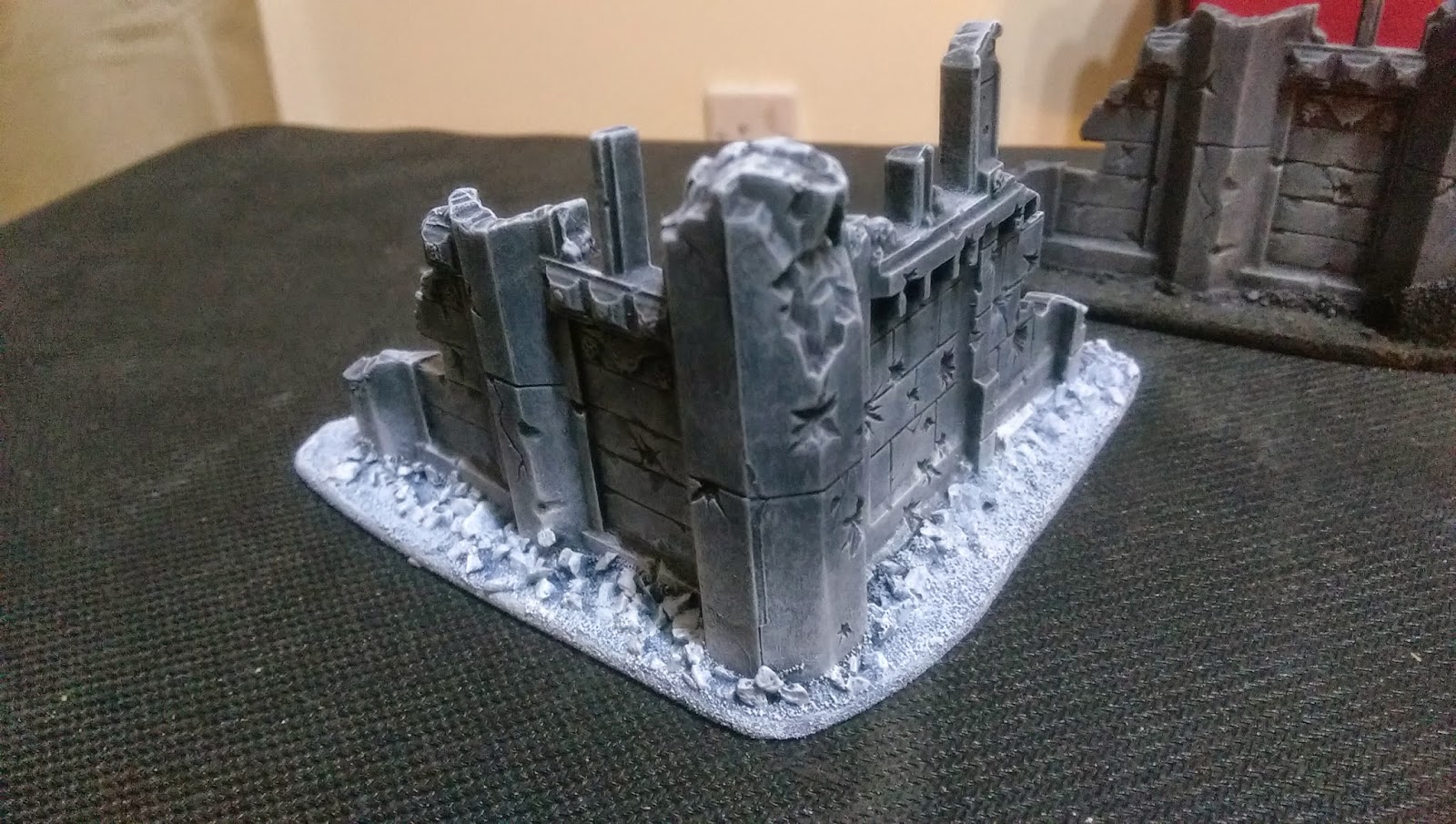 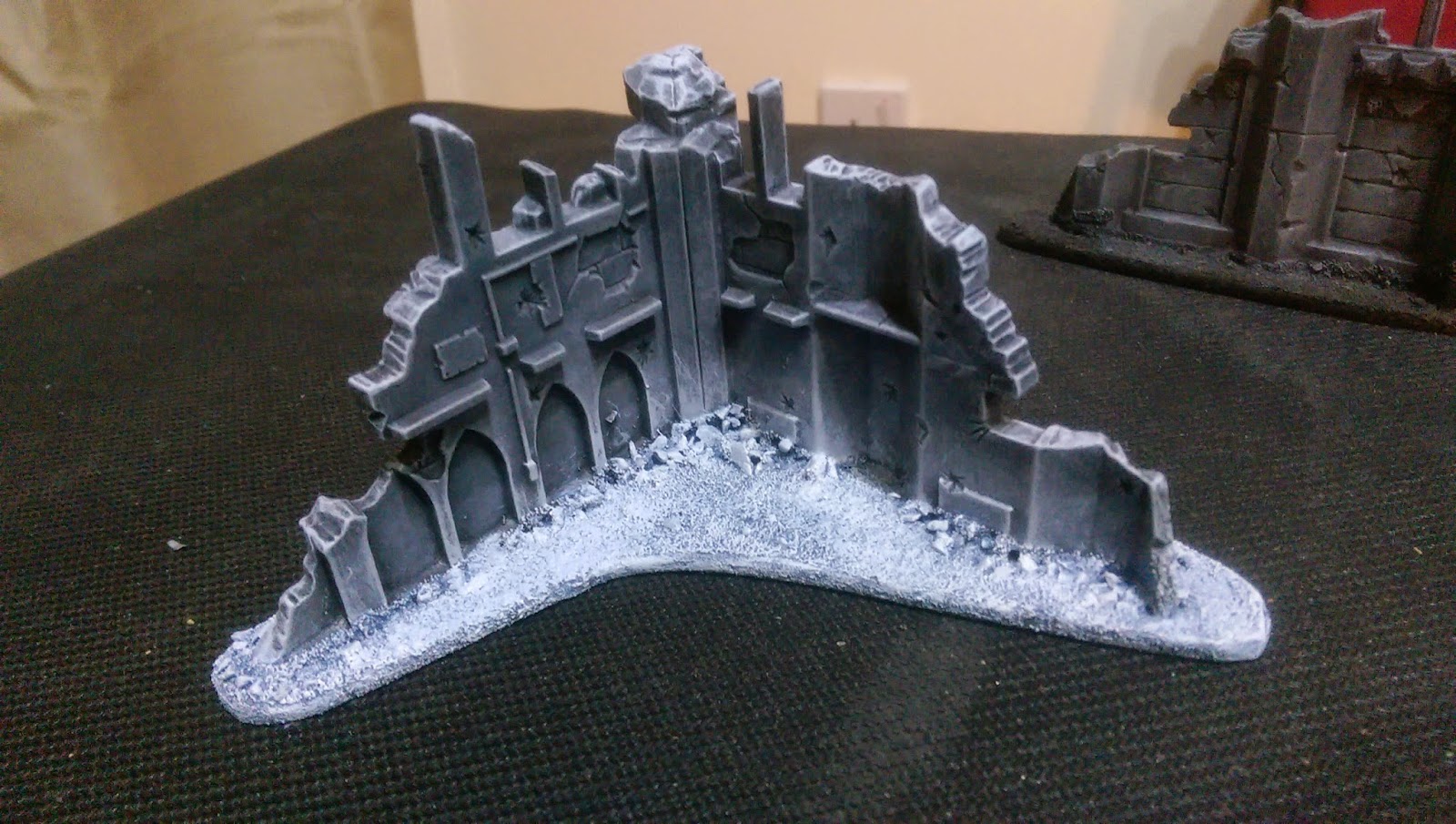 I intentionally let some of the Ceramite White hit the bottom third of the ruin to give a frosted look. I then caught the tops of the ruin too as a base for the snow flock. Here's a comparison to the mat: 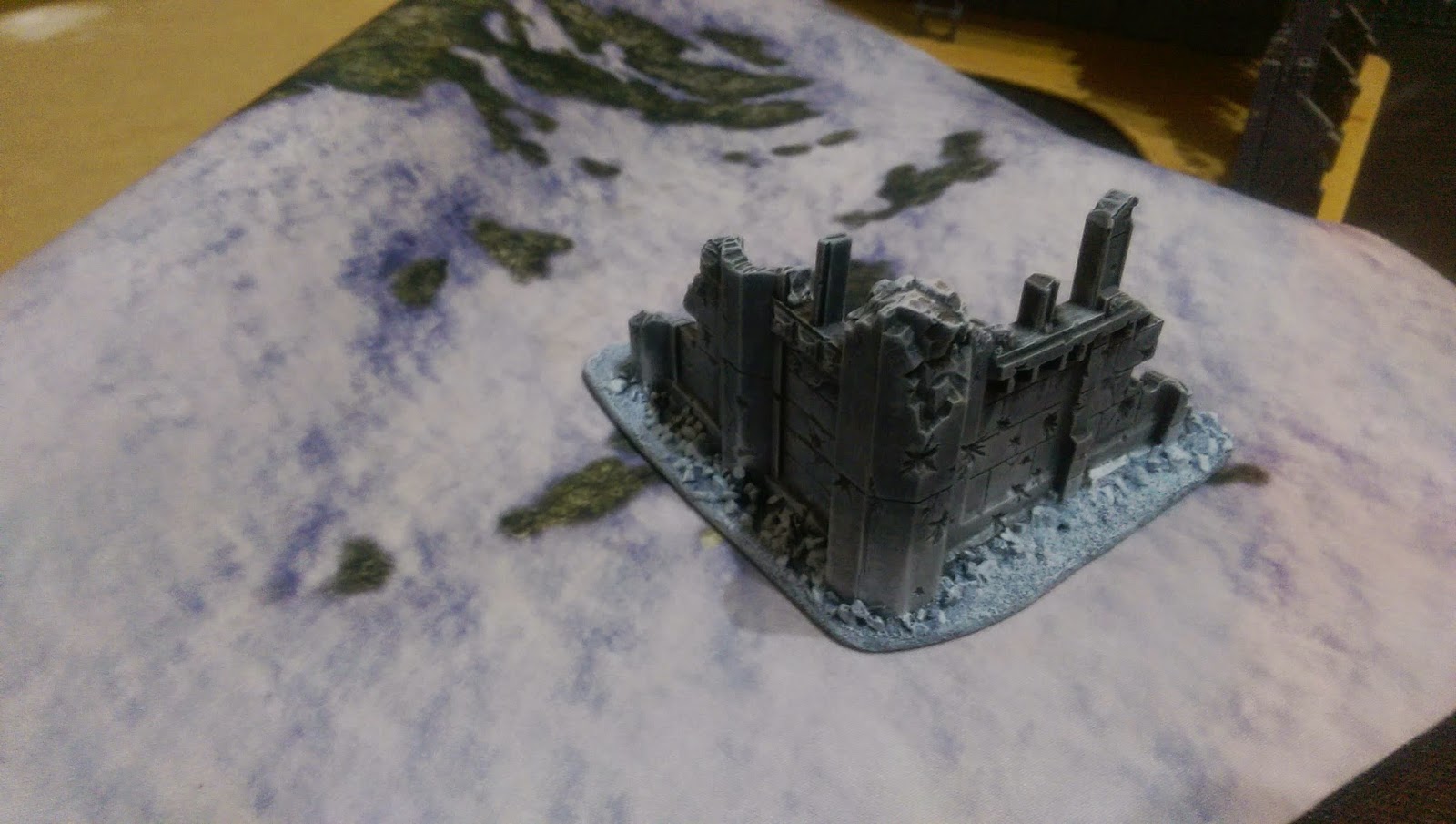 It's a reasonable match but perhaps needs a different shade of blue/grey as a base to really hit the same colour as the mat itself. I ploughed straight on with some Citadel Snow though to see if that helped: 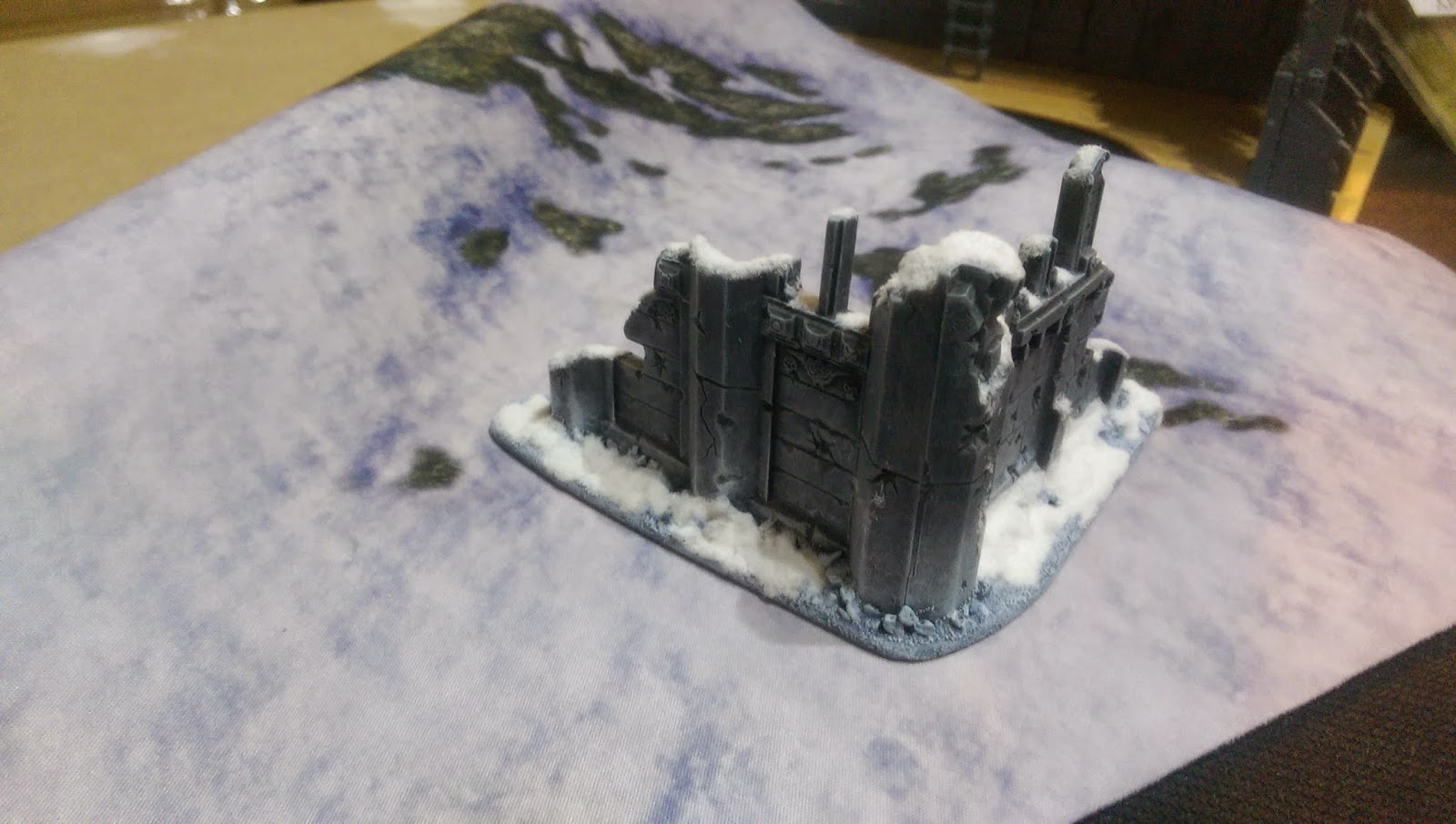 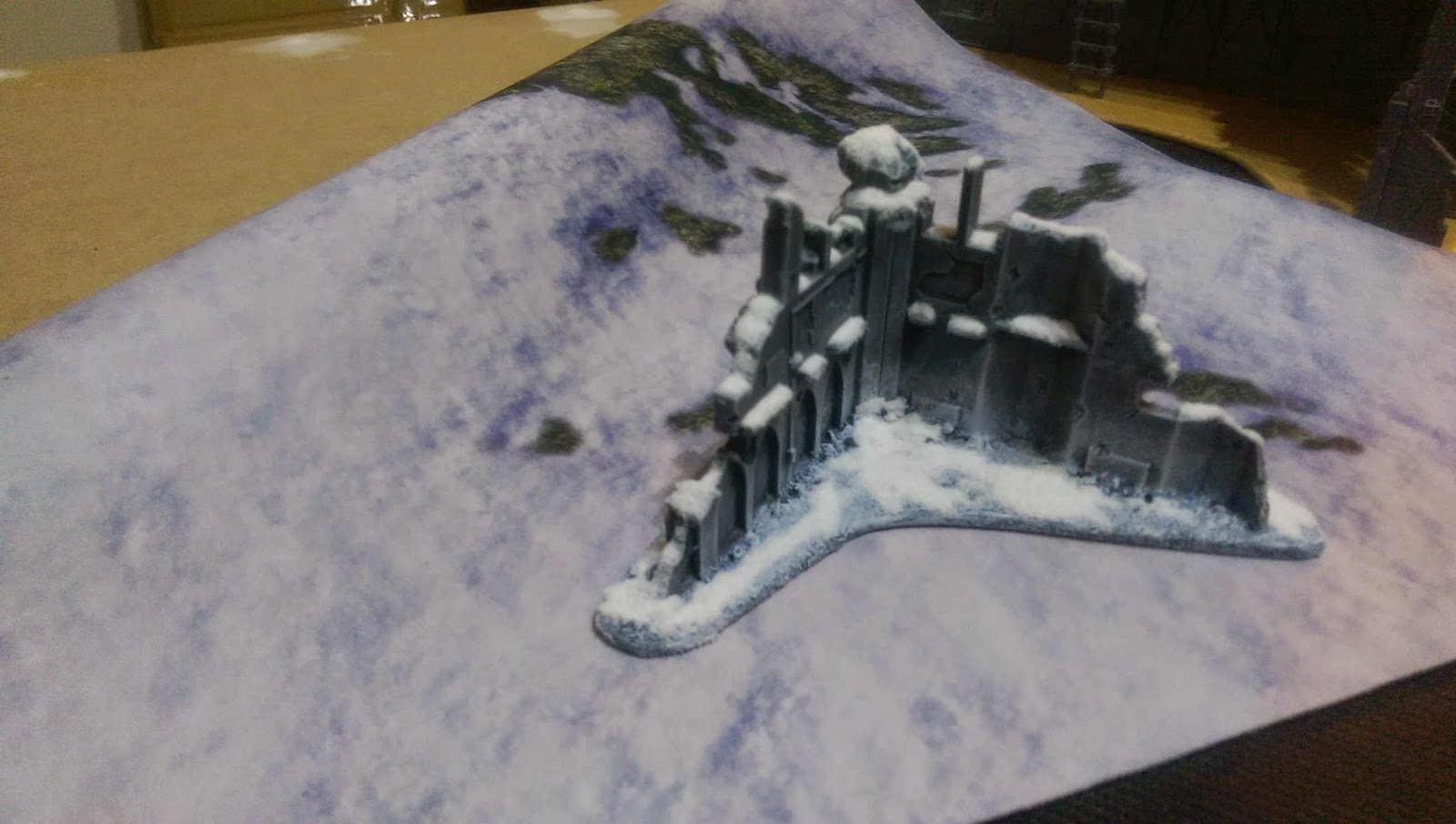 I think it does help actually as it makes the whole piece whiter. I'm not too happy with the snow as it is though as there are bits I didn't hit with glue that I perhaps should have such as around the front of the column and some bits at the back. I was conscious that I didn't want it to be completely covered though. Finally, I threw on some tufts which I probably should've applied with a pair of tweezers but I wanted this to be quick so couldn't be arsed to find any. 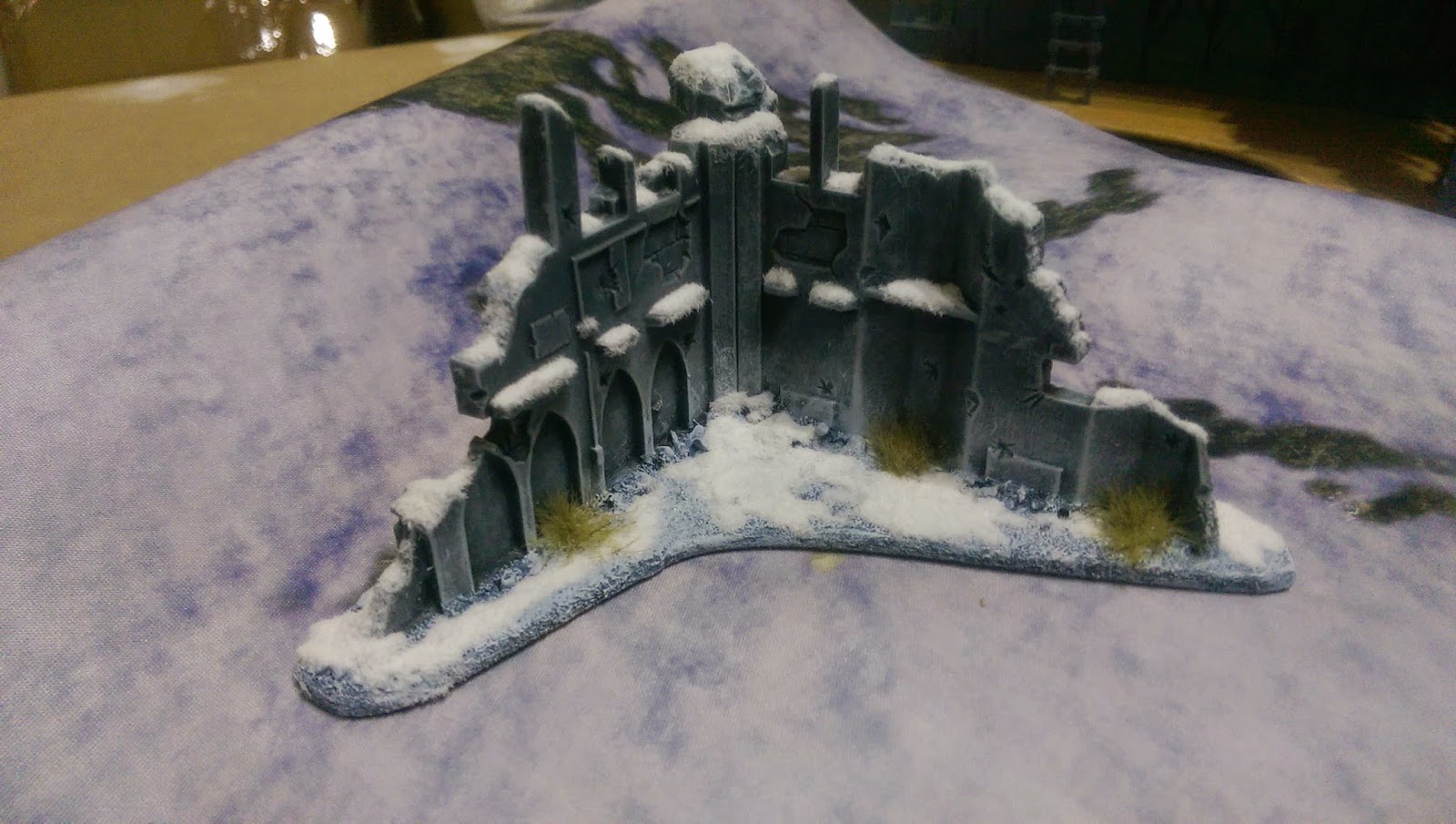 The tufts are Army Painter Winter Tuft but I think I might hit them with some white from the airbrush to help them blend in a bit. At the moment I think they stand out a bit too much and detract from the snowy feel.

That's it for tonight then. I'm very happy with this first piece. Obviously the ruin was already painted but the rest of it didn't even take half an hour I don't think. I'll probably finish the other two ruins that I've got first but then I might look at something a bit bigger. Maybe some of the Moonscape craters with icy water inside. Let me know what you think of my first effort though. It's progress if nothing else!
Posted by From The Fang at 20:17:00