There's just over two months to go until Blog Wars 7 (there are still tickets left - hint hint) and I thought I'd take the opportunity to give you some background to the event and discuss a few queries people have had about the latest incarnation. Hopefully by the end of these 2-3 articles I'll have addressed all of the issues that have arisen or may arise. If not, please let me know but wait until I've finished these articles as I may be addressing your concern in a later post.

Over the last few years of running Blog Wars I've learnt a lot of things about how to create a tournament that everyone will enjoy. The process is equal parts frustrating and rewarding. For every person you make happy with the event you piss one off it seems. All of the decisions I make about Blog Wars are intended to make the day more enjoyable for the players whilst streamlining things so that organisation is easier. This in turn makes the event more enjoyable as, in theory at least, it should run smoothly. I can't pretend the event is perfect though, I've certainly made mistakes in the past but hopefully the next event is always better as a result.

The way GW are messing with 40K at the moment there are a number of issues I need to address and explain why I've made the decisions that I have. I don't want to put anyone off from attending Blog Wars (which is why it isn't blogger only despite the name) but at the same time I want to run a tournament that's a departure from the norm. It's very easy to feel pressured into making a decision about something but you have to keep telling yourself that no one has to attend the tournament. I'm sure the compulsory special character thing puts people off, as does the tabling rules (more on that in a bit) but ultimately if people don't like it there are other tournaments out there that do things differently. Might sound harsh but it comes back to not being able to please everyone and forcing myself to stop (somewhat forlornly) trying. 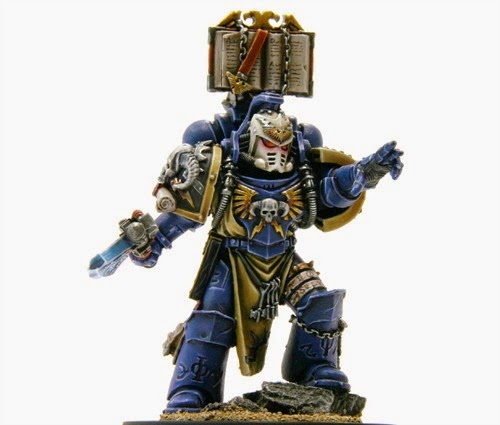 There's no question that Forge World units are now perfectly 40K legal. Well at least to me there isn't. The current rules allow for FW units in conventional games of 40K. That being said, they aren't allowed at Blog Wars. I'm always in two minds about this decision. On the one hand there's a lot of interesting units and new combinations that are possible and FW units can often plug gaps in some of the older/weaker codices making them more viable. On the other hand there are some stupidly good units in there (I hesitate to use the term "broken"). One example is the Red Scorpions librarian (Severin Loth) who can simply choose his powers from particular disciplines. It wouldn't have sounded so bad in 5th but since every other psyker (pretty much at least) rolls for random powers it seems a bit unreasonable that you can take him and be sure to get what you need. There are other examples too but like so many other things in 40K a few powerful units give some perfectly reasonable ones a bad rep.

Perhaps my decision to ban Forge World is, in part at least, down to me never having dabbled with the IA books. There's no question the hobby is expensive but FW takes it to another level. It's a shame though that some of the more interesting armies (e.g. Elysians) are prevented by a blanket ban. However, Blog Wars often features tournament newbies and they're unlikely to have had much exposure to FW. It's another set of rules to learn, another set of books for me to consult when checking lists and a difficult expense to justify for some. For now at least I'm sticking with the ban.

Allies and Inquisition
I've said on many occasions that I'm not a fan of the allies system. It's fine in principle but let down by abuse in tournament lists (like soo many things). The Inquisition book has similar issues for me, I can see why they might be present from a fluff perspective but ultimately they'll get used to bring in Coteaz and/or a few servo skulls. That being said this is the first Blog Wars where there Inquisition Codex has been available so I want to use BW7 as an experiment to see how many people will actually make use of it and if they do, how much effect it actually has.

I know some events use a system where Inquisition (or knight titans etc) take up the allies slot but I want to leave things as they are for now and perhaps look down that path if I think it's necessary for BW8. Similarly for allies, there are a lot of powerful combinations that can be created but by banning those you only make some mono-codex builds stronger. In this case at least I think banning allies would piss off more people than it would please so both allies and Inquistion are permitted at BW7.

Dataslates and Formations
As it stands at the moment there aren't really any overpowered dataslates. Of course Cypher is useful but he's quite a points sink and not especially tricky to kill. He hasn't been too much of an issue in the games we've had with him. I've not had much chance to play test the formations but again none of them seem especially "broken". For now at least both will be permitted at Blog Wars and I'll review them after BW7 to see if that's the right call or not. 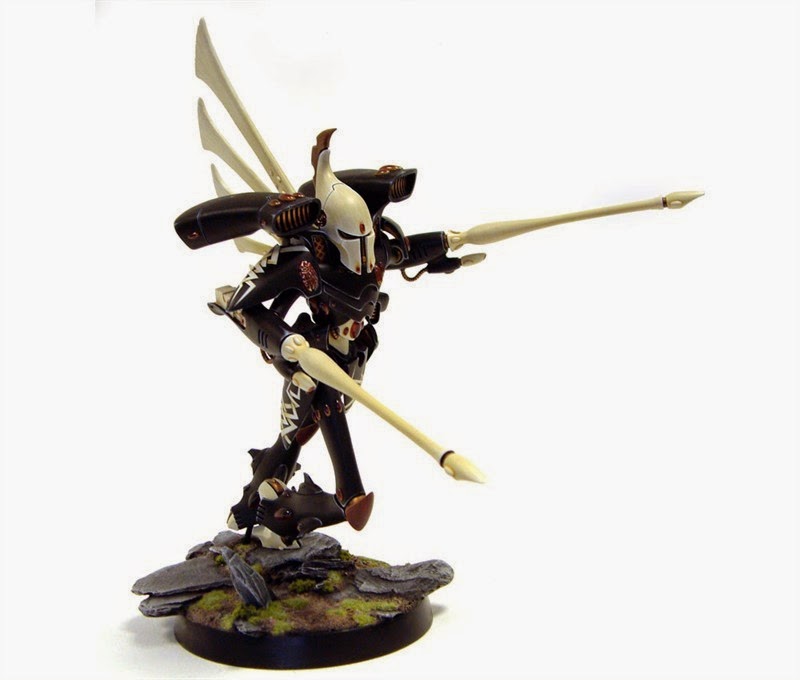 I've lumped these together here but I could actually discuss all three at length in individual posts. Ultimately my problem with Escalation comes down to the Revenant and the Transcendant C'Tan. These two units can potentially win games on their own irrespective of their opponent and even their own supporting units. There are other Lords of War that are powerful but these two simply aren't much fun at 1,850pts. Playing against them in the right environment can be fun. The kind of game where you tailor your lists to try and take them down can actually be enjoyable but in a tournament setting, particularly Blog Wars, I think they'd ruin people's days. Of course people tout them as the ultimate counter to some of the deathstars but for the most part those armies don't feature at Blog Wars and I hope BW7 will be no different. The scenarios will hopefully make the common deathstars less effective anyway.

Stronghold Assault is inextricably linked to Escalation in a lot of ways. One book counters the other. Without having Escalation I don't feel the Stronghold Assault stuff is necessary. Both are perfectly reasonable in Apocalypse or even higher point limit games of 40K but they're too much for 1,850pts. For that reason neither will be allowed at Blog Wars 7. 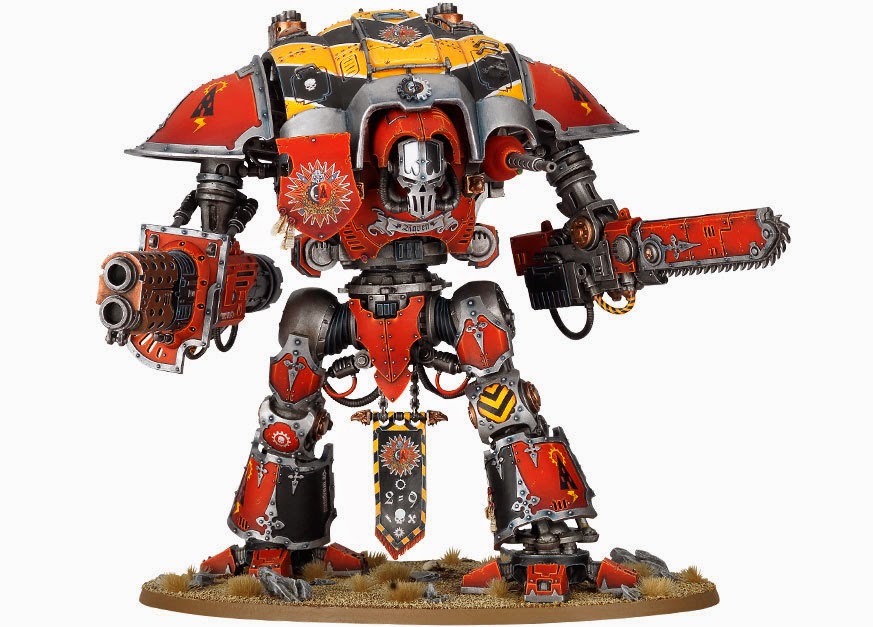 Finally we come to Imperial Knights. I don't for a second think that they're overpowered. I don't think they're indestructible and I don't think they're especially deadly. So why am I not allowing them? Well I'm pretty torn to be honest. On the one hand they aren't too tricky to deal with but there's that potential for their D weaponry (either the CC weapon or Stomp) to achieve something devastating. I'm of the opinion that D-weapons have no place in regular 40K and despite them being worlds away from a Revenant I'm still not happy to allow them. I appreciate the irony when I'm giving one away in the raffle but of all of the things that I'm prohibiting at Blog Wars they're probably the most likely to be permitted at future events.

Conclusion
Making decisions about these things without testing them is always difficult. That isn't to say I don't playtest them at all but rather that I can't hope to test them on a full tournament scale. No matter how much testing I can do in my own games or by visiting other events, there's still the possibility that things will be very different at Blog Wars. Perhaps there'll be something that I should've permitted that I haven't or vice versa but unfortunately the only way to find out is by experimenting.

I've said before and it's still true that I want Blog Wars to be different from other events. What works on the competitive scene doesn't always mesh well with my (perhaps naive) ideal of a friendly tournament. I hope people appreciate the thought that goes into my events and that it shows in the relaxed and friendly atmosphere. Anyway, in the next post I'll be talking more about the scenarios and scoring. I appreciate I've done these kind of posts before but there are new issues (mostly of GW's creation) that I wanted to address so please bear with me.

As ever, I want your feedback on these decisions and I'm always prepared to listen to compelling arguments for why I'm making the wrong choice about something.
Posted by From The Fang at 17:00:00