The State of 40K - Imperial Knights and Pick 'n' Mix 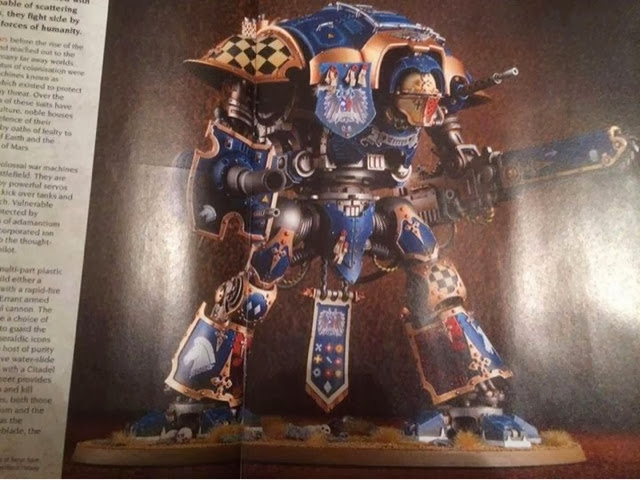 It can't have escaped your notice that we'll be getting a new big model towards the end of the month in the form of the Imperial Knight. Now I'm sure all of those ad mech fans out there will be excited. For me the leak brings mixed emotions.

On the one hand I'm always excited about new models and new rules and I'd love to get an Imperial Knight to use with my Space Wolves and Dark Angels. The rules look interesting and frankly I think they're a bargain (points-wise at least) for a 6 HP SHW. It seems a lot of people don't share my view and seem to think they're overpriced but I really don't understand this. Perhaps their ranged weaponry isn't stellar but stripping 6 HP from a super heav model with a 4++ save (most of the time) is going to be tricky. Compare this to a Stompa, which also has a destroyer close combat weapon, and you can see how reasonable the price is. The Ork behemoth has 12 HP but (assuming there aren't meks inside) it has no real defence. The Knight on the other hand has that 4++ save which gives it effectively 12 HP most of the time. The Stompa undoubtedly has more firepower but with BS2 and Whirr-Click-Click there's the potential for failure. The big difference, and the sticking point for me, is that it appears you can take them as part of pretty much any Imperial army without them being Lords of War.

The fluff player in me has no issue with this. Why wouldn't a SM chapter master seek assistance from the mechanicum in the form of some Knights? There's no reason any Imperial army wouldn't field them (that I can think of anyway). This is always the way GW sell new units to us. They fluff comes first or so they'd have us believe. I can understand this too. To me there are two reasons why 40K is so successful, the stunning miniatures and the deep, rich backstory. That's what sets it apart from the other systems. It certainly isn't the competitive ruleset that has people coming back for more. Of course they want to sell us some models so that fluff comes in handy for them to persuade Imperial players to buy these new models. Sometimes the fluff is a bit of an own goal for them too. Tyranids not being able to take allies is the most obvious example. Makes sense from the fluff but not from a business sense. Still as I say, I'm excited about the Knight and getting to use one in my army.

On the other hand, I'm waiting for them to be abused. There's a part of me that's a competitive player so I'm not going to sit and whinge about the deathstars and other things considered dirty by the community at large. In fact, Knights, like other super heavies are a potential counter to a lot of the power lists out there. I have little problem with people taking the rules of the game and using them to full advantage. Of course, I find it dull to see so many people using the same thing and reducing a codex to a list of "must haves". It's the nature of the game though I'm afraid. Do I enjoy playing with or against deathstars? Nope. Would it stop me using them in a competitive environment. Possibly but the main thing for me is fun. If a list is boring to play with or against I don't care how good it is. Anyway, I'm getting off topic. The issue I have with all of these releases is that they put me in a difficult position as a TO. The Imperial armies are increasingly allowed to play pick 'n' mix with whatever the hell they want to choose from half a dozen codices plus a pile of supplements, dataslates and Imperial Armour. The fluff player in me sighs when I think of Eldrad, Coteaz and Tigurius all fighting alongside each other with a Revenant in tow. It's great to have such a wealth of variety available but it's hardly a level playing field. I want to love the allies system but I can't persuade myself to run a list with allies very often. To me it makes players lazy. Is your army struggling to beat another race? Don't worry about trying to find a solution in your own codex, just throw in some crap from elsewhere to plug the holes. So as a TO do I ban a lot of these extra units and only allow units from a specified list of codices? I had no issue banning Escalation and Stronghold Assault but I don't want to start needing a list of "books" that are allowed or not.

Between now and Blog Wars 7 I'll be looking at all of the new releases closely and trying to keep on top of things. Let me know what you guys think though.
Posted by From The Fang at 17:00:00