I may be pretty new to this game but I'm still pretty excited about the new ships. I'm not hugely keen on the big ships (Tantive and Rebel Transport) that they're about to release because they're simply too big for the 3'x3' board we play on. Maybe we'll progress to a bigger arena later but for now I'm happy to be able to play on the dining room table. Luckily for us, Fantasy Flight announced yesterday that the second quarter of 2014 will see four brand new ships for the game. Here they are: 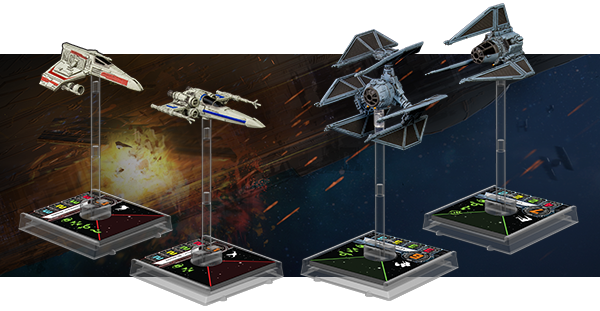 I haven't had chance to fully digest their rules and what they'll mean for the game but here's a quick rundown taken from the FFG site. For more information visit the FFG website for the full preview.


Matt will be picking up the Imperial Aces expansion when it comes out so hopefully we'll get to put the new pilots to the test soon.

Here's hoping FFG keep up this release schedule to help bring variety to my games of X-wing. Exciting stuff.

If you haven't tried X-wing yet I seriously recommend it. There's lots of content on YouTube about how the game works including Will Wheaton featuring it in his board games series, Table Top (although he does get a couple of things wrong!).
Posted by From The Fang at 17:00:00