Before getting into the FOC reviews I thought it was worth going through the main wargear options to make our analysis of the units easier. I'll only cover the weapons that appears as options as I'll look at the unit specific weaponry with the relevant unit.

Melee Bio-Weapons
The first thing to note is that Tyranids can now get a bonus attack from having two pairs of close combat weapons. In the old book this was "already included in their profile" which means a lot of units have now got an extra attack.
Basic Bio-cannons 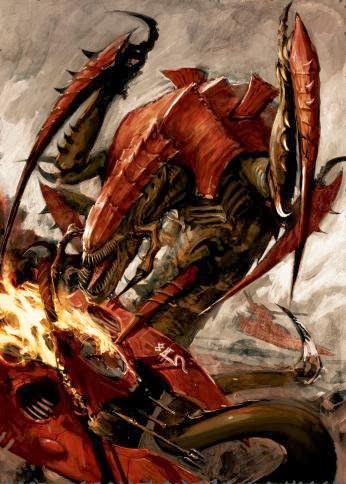 Conclusion
The big news here is scything talons. Not such a big deal for units like the tyrant who usually swapped them out anyway but hormagaunts have suffered because of the change. Seems a shame as I don't think they were particularly overpowered in these days where combat units struggle anyway.

Boneswords probably aren't as good as they used to be. Basically the capacity for instant death is now in your hands rather than your opponent's but there really isn't any point taking a pair of them unless I'm missing something.

In some ways I can understand why regeneration is now a standard costs across the board but it's a shame that there's a huge increase in cost for some models. The mechanic is probably better though as you've got a good chance of getting a wound back. Those situations where you were flukey and got three wounds back won't happen anymore but probably a fair trade.

Unless I've just not spotted them it seems Implant Attack and Toxic Miasma have vanished as upgrades. Neither of these are a huge loss and venomthrope have retained their toxic miasma which I'll cover in their review.

Otherwise things are pretty similar. There's a few nice little bonuses here and there be they price decreases or extra rules. Right, now onto the units themselves.
Posted by From The Fang at 18:00:00