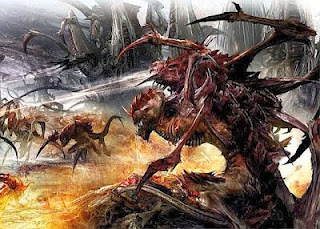 Here we are again with another new 40K codex. Most of you have probably already decided that this codex is a failure right? Well I'm not sure at the moment so join me as I review all of the FOC slots and hopefully we can come to a conclusion together. My knee-jerk reaction is the same as the majority of the community though in that it seems like a step backward. The more I read though, the more I think there's actually subtle improvements and life in the old bugs yet.

The Book
All of the new books have been pretty stunning so far and this one is certainly no exception. Others have complained that there's a lot of recycled artwork but frankly I like seeing artwork I love in full colour. There are some stunning new pieces of art too and some awesome shots of hordes of nids overrunning another army. The army showcase section isn't particularly inspiring mind you. I was hoping for more different colour scheme ideas but basically there's the main three hive fleets and little else. The map on page 31 shows Gorgon, Jormagundr, Hydra and Moloch but unless I've missed them I can't see their colour schemes represented. Even so, the models still look excellent.

Otherwise it's the same thing we've come to expect from the new books. Useful summary section at the back, wargear charts and generally tidier with most special rules in one section. I'm still not a huge fan of having to flick back and forth just to understand a single unit but perhaps they're trying to encourage us to use the digital versions.

New Models
I wasn't convinced by the new FMC models but they're slowly growing on me. I do love the little bugs hanging onto the wings on the hive crone. The haruspex and exocrine as stunning. Perhaps their rules aren't awesome but let's not forget we play this game, in part, for the awesome models. I've always loved the Tyranid models though so I'm easily sold. For me the main thing is that they don't look like other armies. Most of which involve some human-like creature holding a gun. These guys are truly alien.

I can't talk about the new models without talking about the lack of new models. It's a huge shame that GW seem to have rushed this codex out without making a model for Doom, Parasite, ymgarls and mycetic spores. Obviously Doom was becoming a bit of a joke but it does feel like the only reason they've been deleted is to prevent a repeat of the Chapterhouse debacle. It's a bit of a kick in the teeth for those who've spent a long time on well executed conversions for these models. Sure your Doom could just be a zoanthrope now but what are you going to do with your spore pods? I'll get onto the rules implications of these missing units later but suffice to say this is a fine example of the problem with their relentless release schedule. 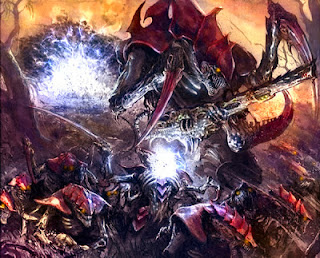 There's been significant changes to the way Instinctive Behaviour works. It's now more important than ever to ensure units are within synapse range (although sometimes Instinctive Behaviour can be beneficial). Luckily there are options for extending the range. The Swarmlord for example comes with a warlord trait giving him 18" synapse which can be extended to 24" with the primaris psychic power. Speaking of Synapse Creatures, I know there's been disappointment that the rumoured Eternal Warrior bonus hasn't arrived. Realistically it would've been a bit OTT. It's a shame they couldn't find some middle ground though and prevent those T4 models from being so vulnerable. Even without this, Synapse isn't something to sniff at. You can still potentially tie up those ridiculous Death Stars with your four point termagants. I still think Fearless is a little flawed in that regard but it's a big deal for Tyranids.

Shadow in the Warp was another hot topic in the run up to this release. For those not familiar with the old rule it forced enemy psykers to test on 3D6 with perils on any double 1s or 6s. The new version reduces enemy psykers' leadership by 3. As far as I can tell this affects them as long as the Tyranid model is within 12", not just when they're taking psychic tests. That means potentially you're more likely to make them run as well as fail psychic tests. Speaking of psychic tests it means a leadership 10 psyker goes from around 92% chance of passing a test to around 58%. That's slightly worse than then 50% before and also doesn't create more opportunities for Perils. So a double edged sword then, affects their leadership for everything but isn't as good at preventing tests and causing Perils. Still it's some of best anti-psychic out there with perhaps only Space Wolves having better. The big problem will be getting your units into 12" to disrupte enemy psychic powers without the aid of a spore pod.

The warlord trait table is one of the better ones but there's only Tyrants, Tervigons and Primes who roll on it. There's some nice stuff in there though like reducing the cover save of a terrain piece, increasing synapse range and gaining FNP when wounded. None of which is particularly game changing but there aren't really any traits that you'd be gutted to get. There's a few changes to other army wide rules but I'll get to them when I'm covering specific units.

Psychic Powers
This is a massive issue for most die hard Tyranid players. When 6th edition hit there were cries that Tyranids were doomed thanks to Overwatch, random charges and generally rules which favoured shooting over assault. That was until people started to take notice of the Biomancy table. By spamming big MCs with Biomancy the Tyranids rose up the ranks again and looked pretty competitive for a time. When rumours hit that they'd be losing access to rulebook powers people again believed them to be finished. Let's take a quick look at that Biomancy table though.

The first thing you notice is that the primaris power is pretty poor, only 12" range, and with poor Tyranid BS it'd be lucky to kill a marine. Iron Arm is obviously the big thing here. Giving your MCs a potential toughness of 9 makes them immune to all but the most powerful weapons. Enfeeble helps your MCs and even the little guys take on the big stuff in enemy armies. Endurance is the poor man's Iron Arm with FNP and IWND. If combined with Iron Arm it can make MCs nearly indestructible but alone it isn't stellar. The remaining three powers aren't much to shout about. Basically then you've got a 1 in 3 chance of getting a useful power. That's not bad at all when you were getting 2-3 rolls with most of the MCs.

Rulebook powers are no longer available though so what does that mean for your MCs? The big weakness of Tyranids has always been that they lack invulnerable saves and access to FNP. The new book doesn't exactly help. You can get them cover saves easily enough but we all know that isn't much help against Tau or Eldar wave serpents.

Don't get me wrong though. The Hive Mind powers aren't awful. The issue is that you're now getting random access to powers you got automatically before. This shouldn't come as much of a shock though. It's the same as every other new codex whether they have access to rulebook powers or not. Some units have access to powers that they couldn't get before but Leech Essence, Aura of Despair and Hypnotic Gaze have vanished. Here's quick rundown of the powers that are left: 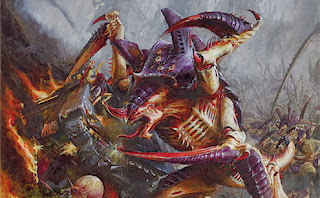 I'll cover this in more detail when I get to specific units but for the most part units are cheaper. The most notable changes are huge reductions for Carnifexes and the Tyrannofex. The big increase, that I'm sure everyone is going on about is the Tervigon which is more expensive, not as good and requires more gaunts for FOC shifts.

Essentially this means you're going to have more models on the table. Obviously that's great for GW who'll shift more boxes but to those of us thinking of starting a new army it means we'll probably have to shell out a lot more to build something decent. It's not quite that straightforward mind you but again the individual unit reviews will make things clearer I hope.

Allies and FOC
There seems to be a lot of people online who are frustrated that Tyranids still don't get access to allies. It's hardly surprising though. I'd have been amazed if GW had changed this but some people actually though they would. Of course this means the same problems will exist for Tyranid players in that they can't pick up units from other armies to plug holes in the nid army. Personally I don't have a problem with this though, I make no secret of the fact that I don't like the Allies system in general and it really wouldn't make sense.

It's a similar story with the FOC manipulations. The only FOC swaps that would help would be to move units into Troops from elsewhere. The other slots don't seem too packed mind you. Once again I think it'd be a shame to see Tyranid armies that don't include hordes of gaunts. On the subject of packed FOC (or not), there does seem to be pretty obvious choices for most slots which I'm never a huge fan of. How many CSM armies do we see without Heldrakes? Obviously this was a problem in the last codex with Tervigons in abundance but it's a shame there isn't more internal balance.

Overall
I think the main mistake people are making (myself included) is trying to compare this codex to the old one. If you simply compare unit for unit then the book looks poor pretty quickly. If, however, you start to look at the army as a whole then I don't think it's anywhere near as bad as people think. I'm still not convinced it'll be top tier but I don't think it'll be a pushover either.

My first impressions are that this codex isn't going to be the game-changer I hoped it'd be. If I really think about it I can't say I'm surprised. Don't get me wrong though, I'm actually a fan of the book. Hopefully the reasons why will become clear over the course of the other reviews.
Posted by From The Fang at 18:56:00