I took the plunge and purchased the Fantasy Flight Star Wars X-wing Miniatures game (catchy title that). Mind you it isn't much of a plunge at around £25 for the starter set. Anyway, let's have a look at the game in more detail. 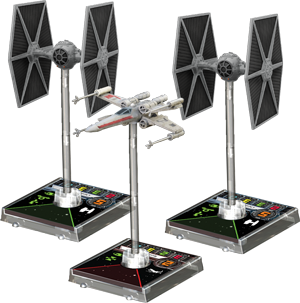 There's a lot of debate about whether pre-paints are a good or bad thing. Personally I'm a huge fan. Obviously they aren't stunningly painted but each expansion is basically a tenner for a pre-painted model with all of the rules for it. There are lots of examples across the interwebs or people repainting these things but I won't be doing that. Frankly it's a relief to have a game where you've got painted models straight out of the box. It's actually one of the reasons I was attracted to the game in the first place. Whenever we consider starting a new game system my first thought is "that'll be even more models that I've not painted".

As anyone knows from 40K, playing with a pair of fully painted armies does wonders for the level of immersion. Maybe I'm spoilt by the quality of the GW models but the x-wing miniatures don't come close to that level of detail. That being said they're just right I reckon. There a few worryingly flimsy looking bits like the guns on the x-wings and the flying base pegs but if I take care of them I'm sure they'll survive.

Final thing on the miniatures is that, for someone arriving late to the party, it's frustrating trying to get hold of the models. I picked up an A-wing and YT-1300 easily enough but I've struggled to find the X-wing and B-wing. There doesn't seem to be any Y-wings at all at the moment wherever I look! I'm sure they'll print some more but apparently they aren't that great anyway.

The Rest of the Starter Box
Essentially you get everything you need to play some basic games. Of course GW starter sets offer this kind of thing but Fantasy Flight goes a little further as they include counters and markers for things. Obviously I'm aware I'm getting excited about a few bits of card but that's the kind of thing that makes a difference. I haven't played all that many games yet but it appears to me that they've thought of pretty much everything. There's an abundance of counters and, as ever with FFG, they're excellent quality.

Everything in the box is aesthetically pleasing. There's a definite Star Wars feel throughout with some nice touches like the range ruler being green on one side (Empire) and red on the other side (Rebels). The starter box isn't perfect though. Even with the limited ships in the box you don't actually get enough dice. When a ship is firing at close range you need 4 attack dice for the x-wing and there's only 3 in the box. Similarly for a tie-fighter evading at long range there aren't enough evade dice. You can, of course, buy some extras for £7-8 but it really only needed them to throw one more of each into the box.

My other, minor, gripe is that you don't get any kind of playing surface. Obviously GW doesn't provide one (or even any scenery) in their starter kits but it would've been nice to get one and I'd have happily paid £50 if they'd included one. I'm aware they're about to release a set of tiles though. As I say, not a major issue but something to think about. 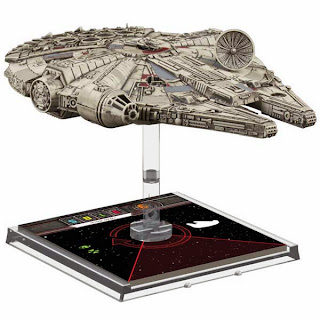 I really feel like I'm getting value for money here. Perhaps that's because I'm used to GW prices but if you bought one of everything they've released so far it'd set you back £200 (assuming 10% off) which you wouldn't even buy you a single 40K army these days. For that you're getting one of every ship from each side and excellent replay value from all the combinations you can create. Each little £12 box gives you a new model, cards, counters, etc. I feel a lot more comfortable buying these than I do shelling out double for some 40K miniatures that I've got to cut off the sprue, build, spray and paint.

The bigger boxes e.g. Slave 1 and the Millennium Falcon add extra missions to the game too. At the moment we've been having some straightforward shootouts and have only tried the missions a couple of times but suffice to say I like the idea of more depth from these additional missions.

Like any game you'll probably want multiple copies of the models and as such you'll end up with a crapload of counters and cards that you don't want/need. Can't really complain for the price though. It seems most people buy a couple of starter sets so that they've got four TIE fighters, two X-wings and enough dice!! If there's two of you wanting to get into the game you can get a set each and then swap models once you've decided which side you want to play as. Annoyingly you'll probably still want to get one each of the X-wing and TIE fighter expansions for the pilot cards. I don't mind this too much though as it means I'll have a decent collection of ships for when I'm playing someone different who doesn't have their own set.

The Rules
That's enough rambling about all of the bits. What's it like to actually play the game? A lot of fun actually, so far at least. The reason Matt and I wanted to get this game was that we wanted something that wouldn't take too long to play but that was still varied and tactical. It's a refreshing change of pace from 40K with play flowing quickly. There are plenty of videos online about how the game actually works so I won't go into too much detail.

I love the idea of the manoeuvres being secret. It adds a touch of realism to the dogfighting as you have to second guess your opponent and hope you'll get yourself into a good position to shoot. The movement feels about right for the ships. The TIEs are pretty nimble but flimsy whereas the X-wing is sturdier but slower and heavier. The models in the box are reasonably balanced if you use the recommended pilots. Some of the pilots, like Luke Skywalker, feel a bit too good even when you've upgraded the TIEs to the same points. I'm hoping that in bigger games those special rules won't seem quite as good as in small games Luke feels pretty invincible.

We had a fantastic game the other day with two tricked out TIEs taking on an X-wing and A-wing (the only models we had at the time). The X-wing was double teamed early on but the brave A-wing pilot managed to out fly the TIE pilots and take them both down by the skin of his teeth. The game concluded with one TIE and the A-wing trying to make attack runs on each other but never quite doing enough damage. Eventually both ended up with a single hull point and the A-wing got lucky with the dice to win through.

I've not played bigger games yet so I'll have to report back when I have but at the moment the games feel reasonably balanced. I've read that eventually the Empire's cheaper ships mean they have a slight advantage but that remains to be seen. For now, I'm pleased with my purchase, the rules are straightforward and most situations are pretty much black and white. There's no "I don't think he can see him" or "you're just in/out of range". That's a big thing for me. I don't enjoy the arguments that inevitably happen in 40K.

Conclusion
Matt and I are determined to keep this as a casual game. From what I've read online there's a big competitive scene with 40K-style spammy lists and general dirt. Being competitive types I'm sure we'll be tempted but we're going to try and self-police it so that neither of us takes something that is particularly nasty. We want to encourage variety over spam. Obviously it'd be fun to have the Falcon taking on a swarm of tie fighters solo but I don't want us to get drawn into diry lists. For that reason I want to steer clear of tournaments. That way we'll be playing for fun rather than testing lists like we're so often doing for 40K.

The shine has worn off a little bit with 40K. I'll be posting in more detail about it later. I'm certainly no quitting or anything but it's nice to have a game to be excited about. I can't wait to test out my Falcon and play some bigger games. We wanted something to play a bit more casually and I'm sure this will fill that role nicely.

Finally, one thing that I think X-wing does well is that it introduces players to miniature based games without the steep learning curve of 40K. The rules are simple enough for anyone to understand no matter what their background and you don't need to be a hobby god to enjoy immersive games. Speaking of which, I've picked up a mat from GF9 which really adds to the enjoyment of the game and despite being a little pricey (£30) it seems to be a quality product. 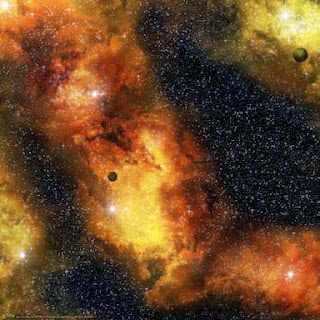 I'll be posting more as I have more games and hopefully be putting up some battle reports. If you haven't already tried it I'd recommend giving it a go for £25.
Posted by From The Fang at 16:41:00