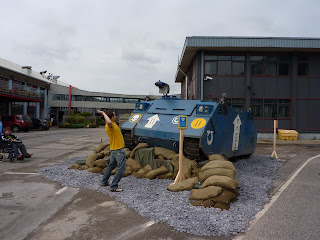 Matt, Jamie and I were at Warhammer World in Nottingham yesterday for the Open Day event run by Games Workshop. This was essentially a showcase of the process of designing both rules and miniatures taking concept art into the actual plastics that appear on the tabletop.

General Event
There were lots of different activities around the gaming hall. One massive table had what must have been about 50 fully painted flyers. There were some absolutely stunning conversions there and the idea was you picked one you liked the look of and had a dogfight with someone. Obviously this is an attempt to encourage people to buy the new flyers but from my perspective it gave me a good opportunity to see how they fair against each other. Stood at this table was none other than Phil Kelly. My first question to him was "you're not retiring then?" to which he responded "no you've got to put up with me for at least a few more years". In case you'd missed it there was a rumour going round that he was retiring that had pretty much already been quashed anyway. It gave me a chance to talk to him about the new rules and their effect on webway portals though (more on that later). 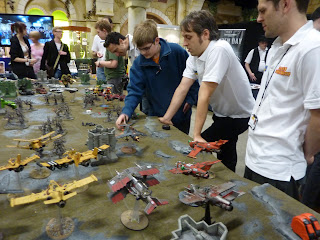 Elsewhere there were tables laid out with miniatures, a massive pile of sprues for the conversion contest (which generated some beautiful models), the game board from that massive in the rulebook where Chaos are assaulting an Imperial fortress (page 390), Forge World, Black Library, etc. There were also some of the artists and designers from behind the scenes showing off the design process. There was a team of sculptors showing how the "three-ups" are made alongside those using 3D modelling software to do a similar process. Across the way was a table with artwork (and the artists themselves) from the new rulebook and units. There were also a couple of competitions running with a "where's wally" style thing where they'd photoshopped some BA into the aforementioned battle on p.390 for people to find.

One of the highlights for me was being able to flick through Jes Goodwin's Dark Eldar sketchbook and talk with him about some of the designs in there. It's amazing how similar his sketches are to the actual models. I mean it's not a coincidence of course but I appreciate the details on the models themselves in a whole new light. We also attended some seminars on the process of creating 6th edition and the Dark Eldar and Necron revamps. There's quite a bit for each one so I'll cover them separately. I wish I'd taken notes to remember everything but here's a rough idea. 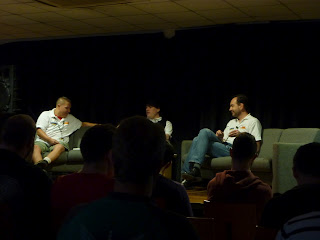 This session talked about the development of the new rulebook with Matt and Jervis talking about the rules and Jeremy talking about the fluff. Let me start by saying that there was an interesting dynamic between Matt and Jervis where you kind of got the impression that they didn't get on making me think that Jervis didn't necessarily agree with a lot of the decisions Ward has made. Maybe that's me being slight biassed against Matt Ward but whatever.

There was brief mention of the reasons why they didn't advance the story on but the general gist was that there's still a lot to cover in the last 10,000 years so they want to feel that most of it had been addressed before they went onto it. Jeremy did say "if we went into the 42nd millennium we'd have to change the name which is no good".

There was a discussion about the reasons for introducing random charge and they said that this came about because of the Overwatch rules. The idea being that even if your first rank of troops gets gunned down they should still be able to get into combat with the enemy. This tied into the thoughts about the removal of charging from reserve. They're basically trying to get away from the mechanic where one player can do something to another without him being able to counter it. Now personally I think there are lots of counters to units assaulting from reserve e.g. centralised deployment or bubble-wrapping units but I can see their point. They talked about the new flyer rules and mentioned that they'd originally hoped to get them out for 5th edition a bit sooner but "it didn't work out that way" making the rumours from last year about a "Summer of Flyers" seem more plausible.

They tried to avoid using the word "cinematic" too much but basically thats the aim of 6th edition. Making the game a bit more emersive so that units perfom a bit more like you'd expect them too. For example, shooting the first rank of an enemy unit down makes sense rather than allocating wounds so that the sergeant always survives etc. Toward the end they basically said that they want to make the rulebook a lot more robust so that the codexes don't need to be so complex. They want to move away from lots of special rules that are codex specific into a system where you don't need to know every codex to understand the game. 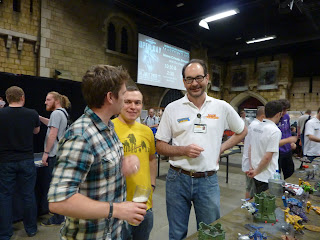 Following the session we caught up with Jervis Johnson and had a long chat with him about various things. We started off by asking about the nerf/buff of particular units and whether it was a sales strategy. He basically said that whenever a new edition comes out there will always be nerfs/buffs to things and its impossible to avoid it completely. On the subject of pricing he said "we charge as much as we can get away with" which is pretty much what everyone thinks anyway. He talked about how the specialist games figure into the mix. Basically they focus their attention on the primary games (WFB, 40K, LOTR) and then when there's some "spare capacity" they might work on a standalone release. This was the case with Space Hulk for example. Jamie asked if Epic would ever come back to which the answer was a pretty firm "no".

We talked about the FAQ process and they said their aiming to do this a lot more regularly. Apparently a lot of the issues revolve around translating them into every language. He said that one of the guys who was working on the FAQs had left and it had taken some time for the new guy to get up to speed. Now that he has we should be seeing regular FAQs. These will be worked into the digital versions of the books (which they're looking into bringing to Android etc) but because of this they wanted to avoid updating things too regularly in order to avoid never really knowing what the rules are at a particular time. He said a lot of other stuff which I've since forgotten but I'll post it up if it comes back to me. 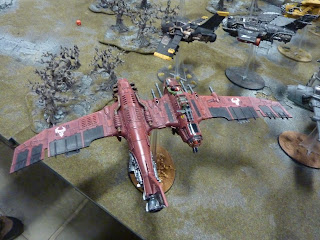 After our chat with Jervis I bumped into Jeremy who asked if I wanted to try out the dogfighting. We both took a dakkajet and went against each other. I quickly blew his up but mostly thanks to some flukey rolls. We then had a 5 way battle with Matt, Jamie and another guy called Nigel where there were 3 stormtalons, a night scythe and a dakkajet. Ultimately Jamie managed to win the day with his stormtalon but the best thing was that every single other flyer actually exploded! The main thing I took away from this was how deadly flyer vs. flyer dogfighting is. They're basically designed to take each other out and they do it pretty well. The other thing is that zooming flyers really struggle to get shots on to back of things and it was only because Jamie was able to hover that he could shoot at all later on. It's going to be interesting in games where there's lots of flyers once people start to incorporate them. 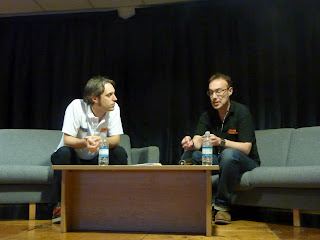 For me this was the best session of the day. This was partly because by this point there were only about 20 people in the room and it felt like more of a chat in the pub than a seminar. Anyway, Jes and Phil talked us through how they'd totally revamped the DE army, models and rules. They were keen to make the models definitely Eldar but not just "craftworld with spiky bits".  The insight into the process of developing the backstory was fascinating as they talked about completely "making it up as they went along".

In terms of gameplay they wanted them to be ridiculously quick (pointing out they're even quicker in 6th) and deadly but this was countered by them being a bit flimsy. I think this comes across well in the book. When asked if there were any regrets about the process there was a mention that "Mandrakes didn't really come out as they were intended", apparently Phil originally wanted them to be able to appear right behind a unit.

Seminar 3: Necrons with Matt Ward, Dale Stringer and Tom Walton
The first question here was about the reasons for changing the Necron fluff. Matt Ward said they wanted to give them a much richer history than they had previously. They then went onto talking about how they designed the miniatures themselves. Basically they didn't want to give them too much personality as we're meant to be talking about soulless machines. Therefore they designed things with mostly geometric shapes. There are some running themes which I hadn't spotted until now such as a coffin shape. This is found on the engines of the vehicles, chests of the warriors and leg cross section of the triarch stalker. Now that he's mentioned it you can see it repeated everywhere in the range.

They also wanted to emphasise that Necrons desire to be human again therefore they actually ride on vehicles rather than being part of them like before i.e. destroyers. Then the rest of the range is their minions in the form of insectoid units like scarabs and wraiths. The idea being that it's easy to distinguish between the two but it's clear they're the same race. 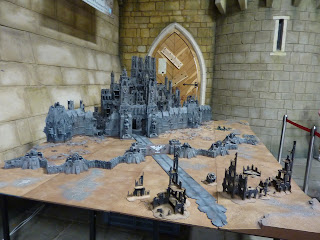 Our Matt had managed to catch up with Matt Ward separately to ask him why they'd made the warscythe AP1 when very few other things are. He didn't exactly give a convincing response which makes you wonder if they really thought it through at all!

Conclusion
Overall I had a great time at this event. There were some really inspiring things on display. Some of the conversions on the flyers made me ashamed that I'd just assembled the dakkajet without doing something cooler. Similarly I was inspired to create something special with our scenery to really immerse myself into games more.

The cynic in me says that it was all just a PR exercise to sell more plastic crack and to be fair it was. However, the chance to speak to the guys who actually write the rules and design the miniatures was pretty impressive. I'm definitely insipired to make my armies look great and actually play some more fun games rather than focussing on competitive tournament games/practice all the time. I think it's easy to forget that it's meant to be a game sometimes!
Posted by From The Fang at 18:00:00