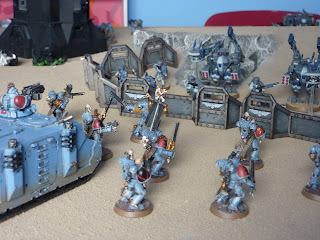 You may have noticed that my scenery is something that has gotten a little left behind in the painting stakes (you might not care!). I've got a pretty varied collection of scenery such as the citadel woods, imperial sector ruins, imperial strongpoint (bastions and defense lines) and moonscape craters. Every single bit of it still it it's original straight-from-the-sprue-grey colour scheme. The only bit of scenery that I've got painted is my home made "realm of battle" board which to be honest needs a bit of love. Therefore I've decided to embark upon a project to change this situation. Therefore I'm going to alternate between painting some figures for an army and painting a scenery piece.

The idea here is to make our games of 40K more immersive where the scenery helps set the mood for the game. With the sheer amount of scenery I have this isn't going to be an overnight change but hopefully if I tackle it bit by bit I'll start to get on top of it. This is mostly inspired by the fantastic new 6th edition rulebook which has some excellent battlefields but also from attending the Design Studio Open Day where there were some fantastic looking scenery being painted in a short space of time. With scenery playing a bigger part of 6th edition 40K I want my collection to look it's best. When everything is either factory grey or black undercoat it doesn't really feel like anything special.

In my opinion fortifications will play a big part in these early days of 6th edition as people will be forced to include them to take those quad guns to deal with fliers. Some armies really don't have any other options at the moment (looking at my Space Wolves in particular). Whilst rifleman dreads present a possible method of dealing with fliers I neither own one or want to use one. The Aegis Defense Line is defintely a cost-effective (points and cash wise) alternative. I bought the Imperial Strongpoint boxed set a while back when Matt and I tried out planetstrike and short of assembling and undercoating it there's been little love for it since. Unfortunately I've given Matt and Dave a set of quad guns to make rifleman dreads for themselves so I'm only left with one. This means that I'll have to paint the defense lines in generic colours so they can be used with any of my armies.

Colour Scheme for my Defense Line
I've therefore adopted a simple colour scheme that won't make the lines look like they belong to any force in particular. With all the scenery the aim is to make them look as good as possible for minimal effort. I don't want to spend ages on all the intricate details (as I'd rather paint my armies) but I want something that looks good on the table top and doesn't detract from the atmosphere of battles. 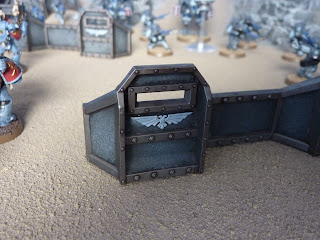 I'm really pleased with how they've turned out. The colour scheme is really simple too. After a chaos black undercoat I simply drybrushed the panels with Charadon Granite (Stormvermin Fur) followed by Fortress Grey (Administratum Grey). I then painted the metal "frame" Boltgun Metal (Leadbelcher) and washed the metal parts with Devlan Mud. I deliberately caught the edges of the grey panels to try to cover up any sloppy work with the Boltgun Metal (Leadbelcher) and to give a worn appearance. The aquilas were then drybrushed with Cermate White to make then stand out. The result is a defense line that doesn't look like it's come straight from the factory. I'm going to try out a similar scheme on my bastions. The paintjob is really quick to apply. This defence line only took me a couple of hours to complete (not including letting the wash dry) but I think the effect is pretty good. Bear in mind I'm still mostly using up the old paints so the new ones might vary in colour slightly.

Defense Line Tactics
Whilst I'm on the subject of Defense Lines I think they make an excellent addition to most armies. For 50pts you get a long length of barricade that you can arrange how you like. This can be excellent for providing cover for static elements of your army and for slowing enemies down as they try to reach your lines. Remember that if you use them to project units on objectives that you can go to ground for a 2++ save. They also offer the option for quad guns, icarus lascannons or comms relays which offer some tactical flexibility. The quad gun is pretty vital for my Space Wolves as they don't have any decent anti-flyer options at the moment. By sticking a squad of long fangs behind the line you can have the squad leader operating the quad gun whilst the rest of the squad fires at another target with their missiles. If they eventually get the option of Flakk missiles this unit will be very deadly to fliers.

For my other armies the defense line is also great for my Tau who can use it to protect a squad of footslogging fire warriors on an objective who can now make the most of their 30" range from safety. I'm not so sure there's a role for them in my DE force though. Not only do DE have an option for anti-flyer in the form of their own flyers but also taking a defense line encourages you to have a static portion of your army which isn't something DE should be doing in my opinion.

Either way for 100pts (with a quad gun) it's easy to fit a defense line into your army so I reckon we'll see a lot of them in the early days of 6th.

What's Next?
Before doing any more work on my scenery I need to paint some Kabalite Warriors and a Razorwing/Voidraven for Summer Skirmish at the end of the month. I'll post more scenery pics as and when I get them finished. My next project is to base and paint a Shrine of the Aquila as a centrepiece for my games. I'd love to know what you guys think of my defense lines.
Posted by From The Fang at 18:00:00