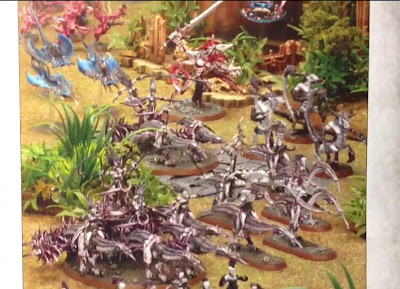 Can't take any credit for this but there's a video on YouTube of the new Chaos Daemons in the next White Dwarf. I imagine it will only be a matter of time before GW get's YouTube to take it down but try and catch it while you can. The commentary is in Dutch (as far as I can tell) but the magazine he's flicking through is thankfully in English. There's going to be a pull out booklet for Chaos Daemons to give them an official rules update for both Fantasy and 40K. I'm going to try and decipher as much of the video as possible to save people having to pause and do it themselves! Here goes (bear in mind it's a bit blurry in places so these are guesses at best!):

I have no idea about Fantasy but the interesting thing is that Soulgrinders can now be used!! Seems a strange move as I don't think they particularly fit with the rest of the models but whatever that's for the square-basers to worry about. No point me trying to comment on rule changes there because I wouldn't know the first thing about them!

Onto 40K, he only flicks through the rules quickly but basically there's a few units that have updated rules to go with their new models. There's new models for Plaguebearers, Nurglings, Screamers and Flamers. All of which look really nice. Matt now plays Daemons so I'm sure I'll have to face these things at some point. I'm considering a CSM army when they get released (now looking like Sept/Oct) so I'm keeping an eye on Daemons as potential allies (borrowing Matt's models!!).

There's a new Chariot of Slaanesh kit that seems to be a dual-kit that makes a (Exalted) Seeker Chariot or Hellflayers of Slaanesh. From what can be seen of the rules pages (video is a bit blurry at times) the standard chariot is 11,11,10 and 2 HP but the "exalted" version has 4 HP. Both seem to be piloted by an Exalted Alluress and will probably work in a similar way to a command barge in that it can only carry one model and is an Open Topped, Fast Chariot. However it says the driver can't get out of the Chariot and if the Chariot is destroyed they die too! The standard Chariot looks like it's 40 points with the Exalted Chariot at 90pts. Can just make out that the Exalted Chariot is a Herald and can take further upgrades. It looks like you take upto 3 chariots as a Heavy Support choice and can take any combination of the two types as a squadron. 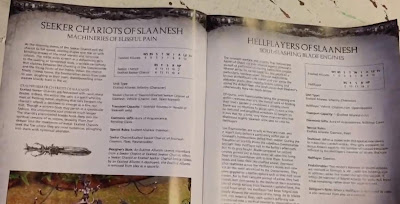 The Hellflayer seems to be the same stats as the basic chariot and again carries an Exalted Alluress. Unfortunately the guy flicks the page too quick to read the rest of the rules!

Flamers are now two wound models and have an initiative boost to 4. There's also a new unit called a Pyrocaster which seems to be a squad leader of sorts and is a Character with an extra attack. Can't quite make it out but it looks like you pay 90 points for 3 (a bit cheaper than before - especially with 2 wounds!). The Pyrocaster is 5 pts and then you can buy additional flamers for what looks like 43pts each.

Also, it seems that screamers rules have been changed but unfortunately he never pans down to their entry. 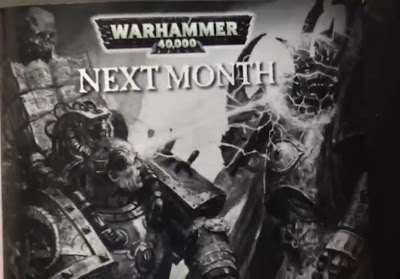 As a final teaser the last page of the new WD seems to hint that next month's issue will contain CSM details as expected! Hope this was of some use to people. Obviously the WD isn't far away anyway! If you want to see pictures of the new models and the video itself check it out on Faeit 212.
Posted by From The Fang at 17:17:00