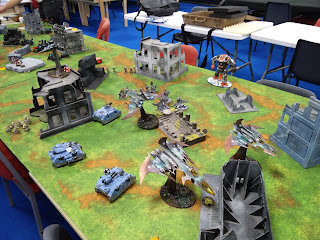 Before I get stuck into the reports, it's worth mentioning that I wrote my army list with the full intention of having quick games that I was unlikely to win. As you'll read below I nearly misjudged it and took away the spoon but spared myself that ignominy at the last. Anyway, here's my list:

Nothing particularly special. I deliberately didn't include any psykers to speed up the game and avoided anything that I could keep in reserve. Still, a good mix of units I like even if they're not the most competitive. I'll keep these reports as brief as I can. Bear in mind all missions use the same combined mission of Maelstrom and Blood Points.

Game One vs. Drukhari (Mark Crombleholme)
Mark's DE force consisted of 2 bombers, 2 fighters, 2 ravagers, 2 venoms, 2 raiders and a handful of troops to go inside. The main threat came from the flyers which proved to be more devastating than I expected. 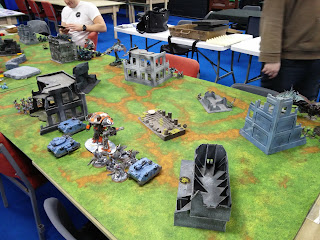 In my first turn I managed to drop one of the venoms but quickly realised that I should've focussed on the flyers as one of the bombers decimated Ragnar's unit with his void mine and left Ragnar as the closest model for one of the other flyers to pick off. The rest of the unit was quickly mopped up and I'd already lost nearly a quarter of my points. 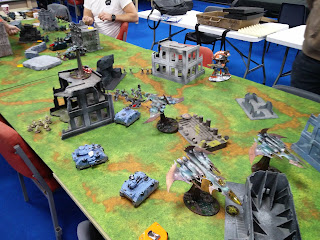 My Knight was unsurprisingly the star of the show managing to shoot down one of the Ravagers before wading into combat with the other and coming close to finishing it off. Sadly the silly terrain rules prevented me charging behind a building to finish it off. The thunderwolves weren't so effective as they loped around midfield never really managing to pin anything down long enough to get it into combat. They were eventually whittled down and finished off. 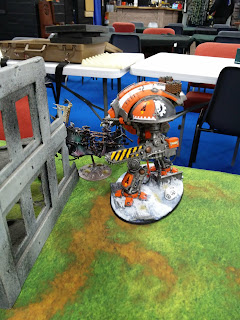 My lascannons proved frustratingly ineffective and Mark's flyers swept round the board doing as they pleased. I eventually finished off one of the fighters but by this point the game was pretty much over. I'd had some terrible Maelstrom cards but Mark still managed to table me pretty comfortably in what I think was four battle rounds. Final score: 2-8 on VPs and 555-2000 on Blood Points. 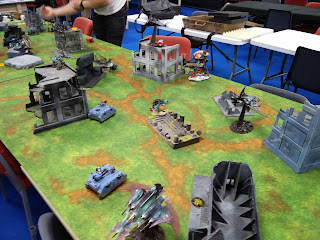 Game Two vs. Primaris Marines (Iron Hands)
Well this game proved to be the story of 6+ FNP. John Purves' marines castled up in the middle of the field to make the most of the bubble bonuses from his characters. His force featured a couple of venerable dreads, a redemptor dread, two intercessor squads, two hellblaster squads, two inceptor squads, a techmarine, captain and lieutenant. 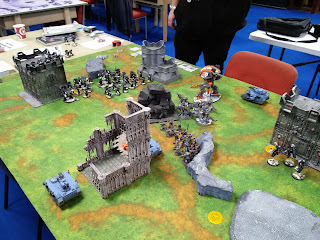 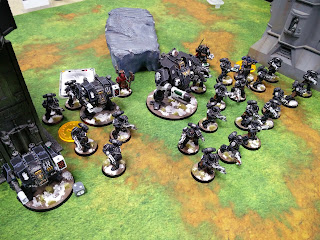 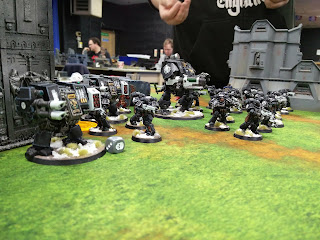 The game started off fairly well for me with a decent chunk of the marines falling. The problem was the venerable dreadnoughts who didn't make a single venerable save all game but made enough chapter tactics 6+ saves to be irritating. At one point I'd scored 8 wounds on one of them which had 3 wounds left and he made 6 out of 8 saves to keep it in the fight! 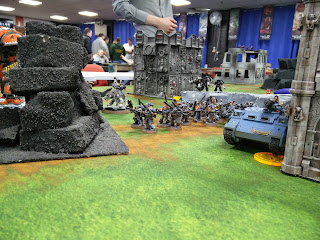 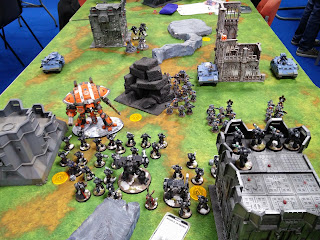 My Knight made the mistake of getting too close to the Redemptor after it charged in to kill off some intercessors with the dreadnought avenging it's brethren with a power fist to the guts of the larger machine. Still, I was feeling pretty confident with the Blood Points totals despite again drawing awful Maelstrom cards. The big letdown were the thunderwolves with the lord failing to kill a single inceptor in combat allowing it to jump away and clear a rhino off an objective to cost me some VPs. 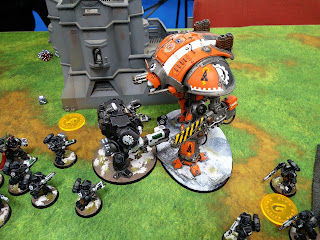 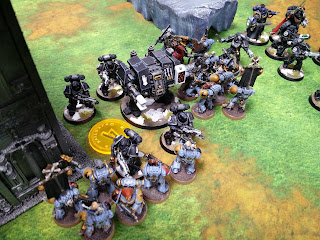 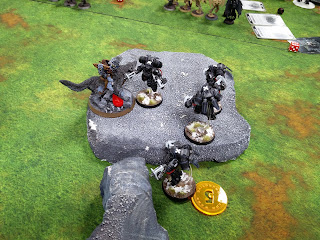 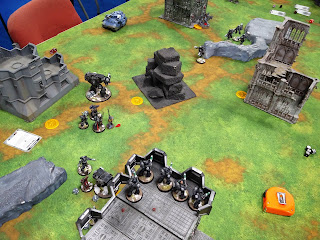 My infantry fared better with Ragnar getting stuck in and making a mess of the primaris marines with his blood claws and the grey hunters adding more casualties. Still, I can't help but feel grey hunters are a shadow of their former might and I can only hope the codex addresses that. It wasn't long though before the tables turned on them and the primaris' extra wound made them tough to shift. The Redemptor was a huge threat in the middle of the field too with it's guns cutting swathes through my forces. It took a while but John eventually managed to table me for a 3-13 VP and 945-2000 BP loss.

Game Three vs. Chaos Space Marines (Cal Goodger)
Cal Goodger's CSM force was like nothing I'd ever faced before. Literally a hundred (and one) Iron Warriors marines with some missile launchers dotted around, two squads of raptors and a Daemon Prince bang in the middle. The sheer number of bodies made my lascannons next to useless and it'd be nearly impossible to make the DP the nearest model so I could target him. 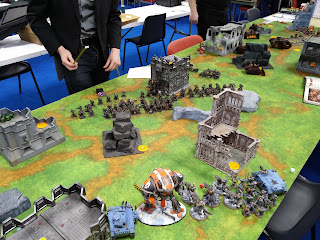 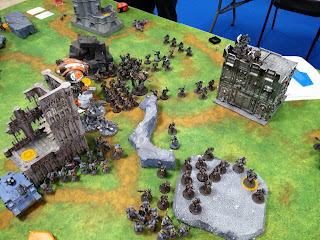 The early exchanges proved pretty fruitless on my part but Cal managed to take the Knight right down to 6 wounds and it's weakest profile. I think this gave him confidence and he advanced his force which proved to be his undoing. The Knight and TWC were able to wade into combat along with the larger grey hunter pack and Ragnar's blood claws. The started to chew into the pile of renegade astartes and soon things were looking a lot more manageable. 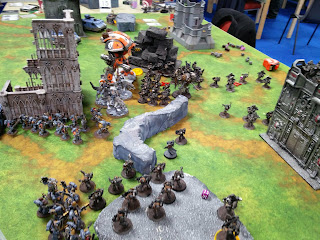 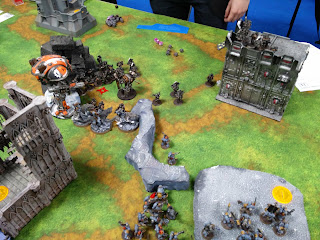 Cal brought in both of his Raptor squads on my right flank but failed charges left them vulnerable and the grey hunters were able to drastically deplete the squads before charging in to finish off the rest. Still in the middle of the field things looked much better for him as the Daemon Prince destroyed the Knight in combat and the nearby squad picked off the TWC. We ran out of time at the end of what I think was the 5th turn but by then Cal and I had little left on the field. Still, I'd emerged with a 10-6 VP (mostly because I got good cards) and 1509-1041 BP win to prevent me from finishing bottom, although at 26th out of 30 I was hardly much better. 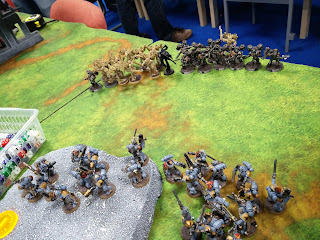 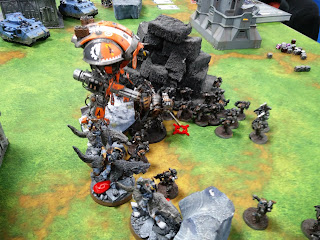 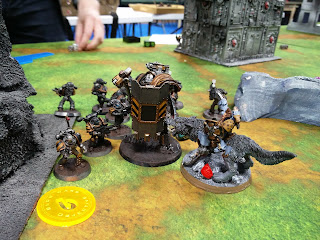 Conclusion
It was great to be able to play some games and for the most part I enjoyed what is only my second experience of competitive 40K in 8th edition. Having said that the randomness of the game bothers me with a lot riding on the damage rolls. I know luck has always been a big part but it somehow feels like the dice beat you more than they did before.

Space Wolves are pretty uninspiring at the moment too. What used to be the strong core of the force, the Grey Hunters feel pretty mediocre and aren't the combat superpower they once were. The same can be said for TWC. I think they were a bit OTT in 6th/7th but that was mostly down to the supplement. They're not awful but with a lot of their attacks coming from the wolves not the riders it feels like you're better not to give them special weapons. Storm shields are probably still a good idea but hammers feel like a waste.

The Knight was, unsurprisingly the MVP for my force but mainly because it soaked up a lot of firepower. I wasn't making many invulnerable saves but T8 alone is pretty effective. Anyway, I'm keen to bring Tyranids to DT3 so expect some updates on my progress soon.

I think, like several people have said, I'll try to mix the missions up a bit for my next singles event. It'd probably be best to have a single BP game, single Maelstrom game and something else.

Anyway, thanks to my three opponents for putting up with me trying to play my games and run the event at the same time. I hope you still enjoyed the games, I certainly did.
Posted by From The Fang at 17:00:00