It's that time again when I produce a series of pie charts to illustrate pretty meaningless statistics about the armies that will be competing at one of my tournaments. This time it's the Double Trouble 2 edition. Last year's Double Trouble (1) edition featured a bumper helping of pie. This year I've been pretty lazy and just updated the pie charts to reflect this year's offerings.

Once again, thanks to everyone for submitting the lists. Special thanks to the two guys who've joined in last minute to make up for a few unexpected dropouts. I have to say again that I'm glad I'm only looking at 750pt lists but at least this is the last time I'll be reviewing lists based on the bloated 7th edition rules. It's been nearly impossible to keep track of all the source material. I'm looking forward to everything coming from a much more limited set of books. Well, until we start getting the new codices that is. I'm also looking forward to what I hope will be my first events without significant comp. Reading through the rules for 8th I think that were I to run Double Trouble again in the new edition I'd probably just have to keep the single detachment and everything else will be fine. I'm sure people will find ways to break the game again though so my joy will probably be short lived.

Right, onto the pie!

The Pie Charts
As ever we begin with the faction breakdown pie: 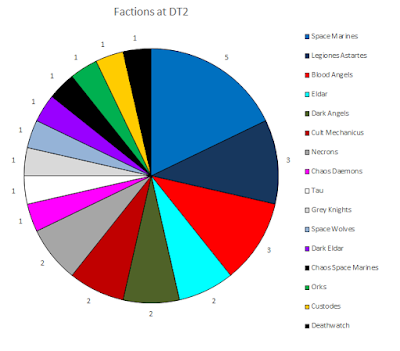 Look at all the pretty colours! Once again you guys have, without any input from me, managed to represent nearly every faction in the game. Sadly no Tyranids this time which is always a big disappointment for me. Still, I'm looking forward to seeing Dave Weston's Ravenwing in the "flesh" so I'll forgive him. Again no love for Guard but hopefully the new edition will make them more viable again. At least we've got some Chaos Space Marines and Necrons this time around. One thing we certainly aren't going to be short of are Space Marines: 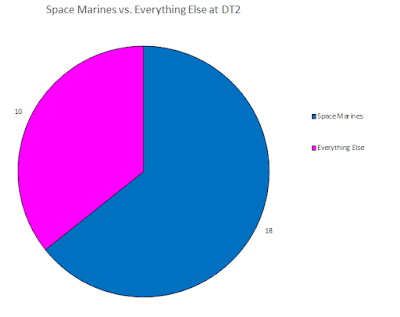 Bear in mind the blue bit includes some Legiones Astartes armies, CSM, vanilla SM and all those chapters worthy of their own book e.g. Wolves. Proportionally there's a pretty big jump there though from last year's 50:50 split. I feel vindicated in making that pie chart last year now as it makes it more obvious that they've increased! Screw you again if you internally mocked me for making it! You have to wonder how 8th edition will affect their popularity. Of course, you don't really have to wonder because I'll quite literally "chart" their rise or fall in the next pie chart post.

I guess you're wondering what chapters these multitude of marines represent? Well whether you are or not here it is: 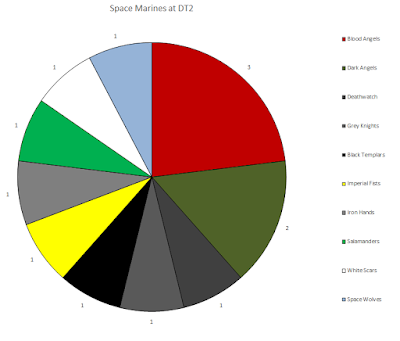 The biggest change here is that Blood Angels (boooo!) have swapped places with Space Wolves (woooo!). There's just one player representin' for Fenris this time compared to three last time. So "what will these many marines be up against?" I hear you cry. Well let me show you: 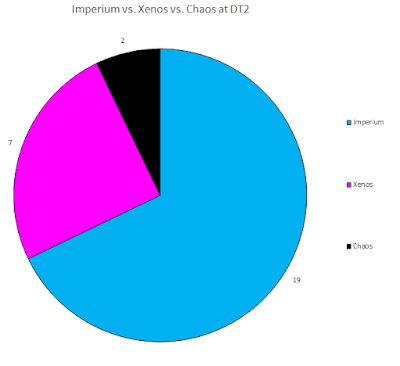 Despite successes at Cadia, Chaos isn't looking like it's in the ascendancy here. Again, I really hope 8th will go some way to fix this. I may not be a fan of Daemons but I'd love CSM to feel a lot more like they do in the fluff.

How have people organised their armies though? Well here's how: 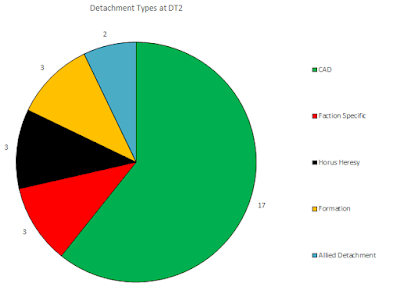 A CAD remains the most popular detachment for obvious reasons. Firstly that Objective Secured isn't hurting anyone in Maelstrom games but also because 750pts doesn't really allow you much scope for anything else (it's like I planned in that way.....). This pie chart will look significantly different in 8th I'm sure with the 27,000 (or thereabouts) different detachments that feature in the rulebook. Speaking of which. I will, of course, be dropping a review of the new book once Double Trouble 2 (and a super secret post) are out of the way.

What's again somewhat surprising is the lack of formations: 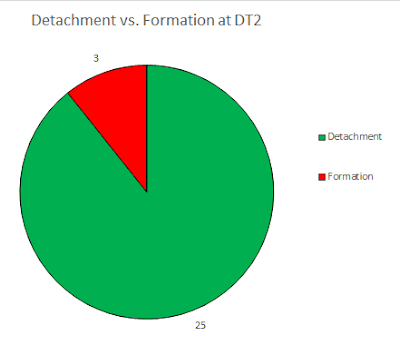 We aren't seeing any more than we did at DT1. Obviously the reasons remain the same in that a lot of them are impossible to field in the Double Trouble comp (again, it's like I planned it or something). I think you'll be pleasantly surprised/amused by the formations that do feature though but I won't spoil that for you (how's that for a cliffhanger!!).

Last, but not least, Forge World usage. You might remember DT1 was the first time I've allowed Forge World at my events for a while. The general consensus was they weren't too bad so I've allowed them again: 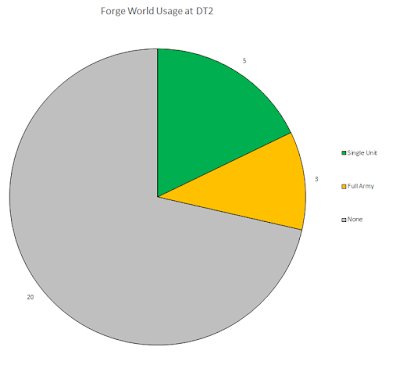 Ever so slightly higher proportion of FW units/armies than last time. Exactly the same number of armies include a single unit (or more) and there's still three Heresy era armies in attendance. Same numbers then but a slightly higher percentage as we're down by 4 people compared to DT1.

That's it for the pies. I'm hoping the slight downturn in attendance is a result of the impending arrival of 8th edition. I really hope the new edition will be a positive for the game and bring people back and get attendances up. GW has really gone a long way to supporting independent events in the last year or so. They've still got a long way to go in my opinion but we're in a much better place than we were when I was first motivated to run Blog Wars.

Right, we've all gorged ourselves on pies now so it's time for me to make sure I've printed all the bits and pieces for Saturday. I might get chance to showcase my DT2 list (although I'm just a stand-in at the moment). Not long now for any of you still painting. Apologies for not giving you the same support I did last year but I'll endeavour to do better next time!
Posted by From The Fang at 20:52:00