Just like in the original Double Trouble, the painting competition at DT2 was split into four categories with £50 worth of Element Games vouchers up for grabs: Best Painted Army (£15), Best Conversions (£15), Best Painted Character (£10) and Best Painted Vehicle or Monster (£10). Players could only enter one category so it was up to them to decide which one to enter to give them the best chance of winning.

Today I'll cover the Best Army and Best Conversions entries. Much better pictures this year as we weren't playing in a cave like last year. Still, apologies as ever for the picture quality. I have to dash out and take these between entering scores and trying to eat lunch!

Best Character
Just three entries here which was a bit of a surprise for me really. Walking round I thought there were a few models that deserved the spotlight but I guess you can't force people to enter. First up, Jim Maynard's Terminator Librarian (5 votes). 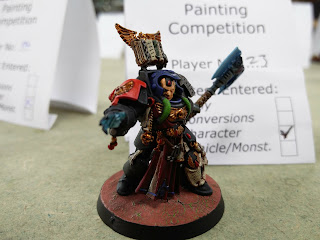 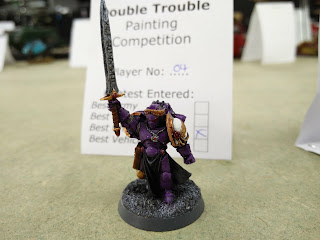 But the winner was Luke Capper's Dark Eldar Succubus (16 votes): 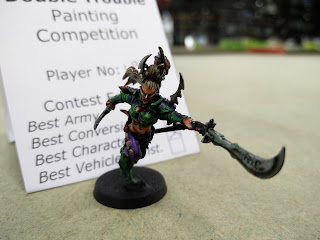 Best Vehicle/Monster
There were five entries here. Entries could either be a monstrous creature or monster (obviously!). This is usually my favourite category as I'm a sucker for the big stuff and it didn't disappoint this year. First up, Ian Plumpton's Baal Predator (1 vote): 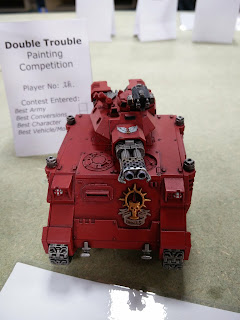 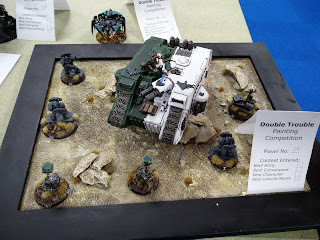 In third place, Mark Hinson's Tau (or is that T'au) Riptide (3 votes): 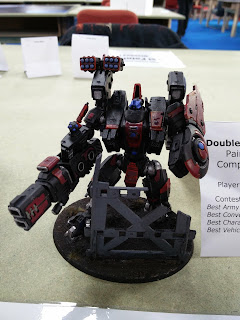 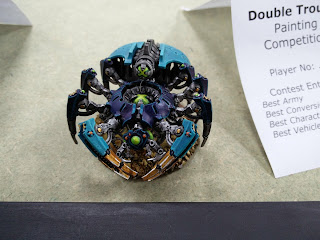 But way out in front with a whopping 17 votes and the biggest margin of victory in any of the catergories was David Irving's Fire Raptor: 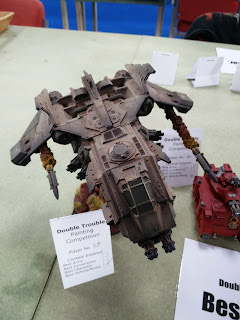 As I said, I didn't play in the event so there are no battle reports from me. This therefore wraps up my coverage of DT2 but I'm sure you'll find some of the other bloggers writing up their own reports. If you want to keep track of developments with the event and find out when the next one will be then join the Double Trouble group on Facebook.
Posted by From The Fang at 21:24:00