Well, with the mini-tournament tomorrow I can safely say I've failed in my target of getting my Tau army updated in time. When I started this little project my piranhas were in various states of painted. One wasn't far off, another was painted in a totally different colour scheme and the third wasn't painted at all. Their drones were only painted on the top surface and none of the pilots were painted. Here's how they look now: 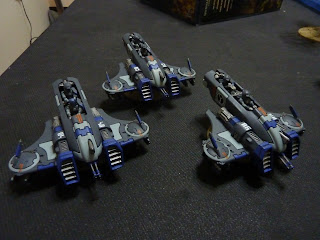 As you can see I've managed to make a lot of progress with them. They've all had the base colours of greys, blue and metal. They've also had all of the panel lines painted in black before transfers were applied followed by freehanded numbering and sept markings. The drones have been given sept markings to match the squad so that once they detach you can tell where they originated.

I'm pretty pleased with how the sept markings turned out. I originally just had them on the panel in front of the cockpit but I then decided to repeat them on the sides of the fuselage too. In hindsight they'd have probably looked better on the top at the back but I'm happy with my freehand efforts nonetheless. 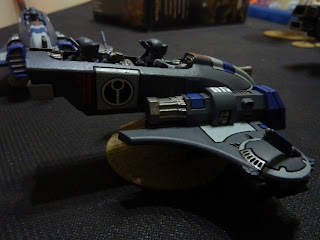 The only transfers I applied in the end were the Tau symbols on either side the tail. The numbering was of mixed success. I started out using the individual number transfers from the sheet but these just wouldn't stick and kept falling off despite my efforts. I therefore decided just to paint them on. For those of you not au fait with the Tau numbering system they're numbered 23, 24 and 25. The problem with freehanding the numbers was that I didn't keep very good control of the size of them. They're probably best on "25" which was the last one I painted and I think I'd gotten the hang of it by then. Perhaps I'll go back at some point and redo the other two to match. 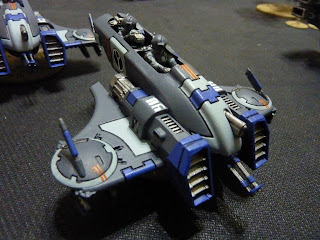 The only thing they need now is the sept markings repeating on the pilots, highlighting, weathering on the engines and then some matt varnish. I've decided I don't want to heavily weather them just yet. Mainly because I'm not confident doing it and I don't want to ruin all my hard work making them look neat.

Sadly I didn't get the Devilfish or Fire Warrior sept markings finished in time but that'd probably only be an evening's work some time in the future. Anyway, we're playing the mini tournament tomorrow so I should probably head to bed. If you're down at WHW for any reason (most likely Council of War) feel free to pop over and say hello.

Here's a rundown of the armies tomorrow:


Should be great fun and it'll be nice to play three games of 40K if nothing else. Oh and gawk at all the dioramas!
Posted by From The Fang at 22:32:00