Planning An Army for Fluffageddon!

So, since I won't be playing in a Blog Wars any time soon I need to look elsewhere for my competitive(ish) gaming fix. I'm still hoping to attend some events at my FLGS from time to time but the other event on my radar is my friend Matt's tournament, Fluffageddon. If you haven't already checked it out then head over to the Fluffageddon page on this very blog for more information and to buy a ticket.

You'll notice that I'm the first name on the list! I have every faith in Matt to run an event that has a similar atmosphere to Blog Wars whilst trying to do things a bit differently. Speaking of which, as the name suggests, Fluffageddon is attempting to make 40K that little bit more fluffy and less filthy. The question is what army should I take? I have Space Wolves, Tau, Orks, Dark Eldar and Dark Angels (for now, I'm thinking of selling). I've also started work on my Imperial Knights but I'll talk about that more soon.

Before I pick a faction let's look at the army selection criteria. These have become a mainstay on the independent tournament scene where pretty much every event has some variation on the standard army selection in order to try and bring some sanity to the GW spawned madness (or chaos if you will). Here's Matt's take on things:
Same points level as Blog Wars, two detachments and no Forge World so at least that's familiar territory. The rest is pretty different though. It's much simpler than it looks though. Basically there are only two units that you can take more than one of and no unit can be double it's starting size. That makes things interesting then. There'll be no massive blobs of anything but neither will there be multiple Night Scythes or anything like that. Initially this seems restrictive but I actually think it makes writing a list a challenge (in a good way). It's like Highlander only with a couple of doubled up units.

However, the key to Fluffageddon is that there's effectively a tournament within a tournament. There will be some prizes that only "fluffy" lists can win so if someone decides to bring something filthier they aren't likely to qualify. Here's the criteria to be considered fluffy:

Single codex is right up my street and frankly I rarely use allies so it won't be a problem. Fitting into the background is good too. I don't do this much in my tournament lists but in our friendly games I enjoy putting something together that feels right for a particular faction. Fully painted might be my downfall but that's why I'm planning now so that if I need to do more work I can. It'll be nice to be able to participate in a Best Painted competition for a change but with only two months to go it'll be a slog depending on what army I go for!

The "full of filth" bit is a bit harder to quantify but since Matt's usually the one running filth (outside of BW) then I'm sure he'll be able to spot it. Takes one to know one and all that!

Right, let's look at some options then: 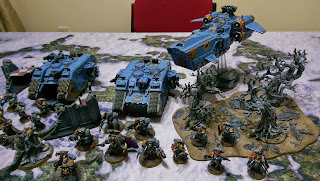 Whenever I think fluff I immediately think Space Wolves. Their easily the favourite of my armies and this is mainly because I love their backstory and generally identity. Despite not having to take a special character I think for me it's easier to make a list fluffy if I'm theming it around one. I could centre it around Thorgrim Darksteed, my thunderlord but I'd like to give Ragnar a run out perhaps. Well straight away I have to rethink things as I can only take a maximum of two drop pods. That means only one arrives turn 1. Still I'd like to have a couple in there. Here's my first attempt at a list:

Irritating to only spend 1846 points but a reasonable force. I could easily ditch some of the HQs, switch to a CAD and throw something like a predator in there or maybe a rhino for one of the grey hunter packs. Unless I'm missing something that list is legal though with just the grey hunters and drop pods being duplicates. It's got a bit of everything in there too with psychic, anti-air, etc. Should be fun to have the two dreads but obviously with one dread per turn (and no guarantees of the second coming in turn 2) they might be vulnerable.

Still the main bonus is that I have a ton of this already painted. I'd need to build and paint Murderfang and I'd like to replace my Bjorn with the new model but otherwise I have all of this ready to go. It'd just be a case of touching things up to get them looking their best. 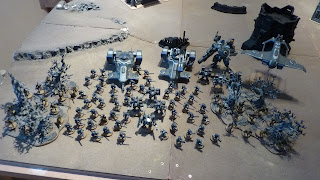 With limits on the number of duplicates Tau seem like an obvious choice as there aren't really many bad entries in the book. The problem is that they have pretty weak troops. Still let's see what we can do:

This list is stronger I reckon. The duplicates are the fire warrior teams and their devilfish. With the Ethereal they're getting 3 shots each when they hop out. The Kroot blob can Outflank and just be a nuisance. The commander and his team drop in from deep strike to deal with vehicles. The riptide has some anti-air with help from the sun shark and skyray. The piranhas are in their for crowd control and anti-infantry fire. Longstrike is in there mainly because he's awesome and it's a good excuse to run a hammerhead. Finally, the missile team adds some reasonably reliable anti-tank firepower.

I think I prefer this to the Space Wolves list and it'd be less work to get ready. Everything except the piranhas are good to go and with my airbrush they'd be ready pretty quick. Like the wolves I could do some work on them to make them better but I wouldn't need to which is a nice feeling. 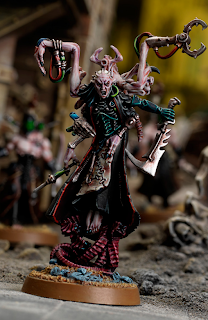 Whatever I bring here they're the total opposite of the SW and Tau in that they're pretty much completely unpainted. It'd be a great excuse to get them ready of course but in two months it's pretty much impossible for me to have them ready. Still let's look at a list to see what can be done with my collection, perhaps there'll be a Fluffageddon 2 next year eh?

Two detachments this time but still just the two duplicates. I really like this list. There's a strong coven element but there still the core DE units to keep the identity. The razorwing gives some, perhaps limited, anti-air. The ravager and scourges are the main anti-tank with the odd blaster elsewhere.

The formation should help with that too. There's very little of this army that's ready to go though. The whole Dark Artisan bit is fully painted but otherwise I'd need to pretty much paint everything else and with all that line-highlighting it's likely to take a good while too. There's not a huge number of models there to paint though so it isn't out of the question. If I did decide to go for it I'd need to get motivated but it'd be a good excuse to finally make some progress on them. 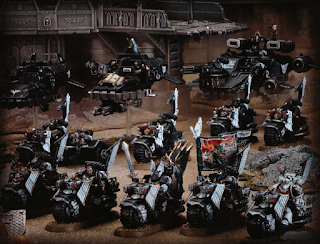 I've not really had enough time to digest the new book to start writing lists yet but I can see them being feasible thanks to the command squads etc making multiple units of effectively the same thing possible. Part of the problem at the moment is the broken Ravenwing Strike Force that doesn't actually allow enough HQs, assuming you can take a HQ provided they're on a bike I'd like to run this:

Bollocks. I really want to sell my Dark Angels but I really like the look of this list. Shockingly quite a big chunk of it is painted too and with all that black it doesn't take too long to get things to a good standard. At the moment this list isn't legal though as the librarian is a bit of a grey area. God knows what you're meant to take for the other HQs in that detachment though!?!

This list looks pretty nasty and you can't for a second argue it isn't fluffy! I don't think it's hugely filthy either. Strong yeah, but not filthy. That's 30+ bikes with 3 speeders and a flyer. Pretty low model count. I'd be very tempted by this.

Conclusion
You know what, I really thought this would be a lot more difficult than it's turned out to be. With the duplication limits I thought I was going to struggle to fill the points. I'm not going to pretend these lists are perfect as I only threw them together to give me an idea of what is possible. It's worth bearing in mind that assuming everyone wants to go down the fluffy route there won't be as many awful lists to face so certainly the Tau and DA lists would be strong contenders. Think about it for a minute. Only two wave serpents in an Eldar list and then only two units of windriders too with a maximum squad of 6. There'd only be two Night Scythes and two Ghost Arks in a Necron list too for example.

I've come away from writing this really motivated to come up with some other lists and improve upon the ones I've presented above. It's a really interesting army selection method without a complicated list of banned things like Blog Wars might end up being. A lot of the things that might end up being overpowered at Blog Wars wouldn't be allowed. For example since the Skyhammer requires two pods, two dev squads and two assault squads you simply couldn't field it at Fluffageddon. It's not a perfect system of course and it still favours some armies but what system doesn't?

I can't wait until we get chance to do some playtesting to see how these lists pan out and what the game is like with less filth.
Posted by From The Fang at 17:00:00