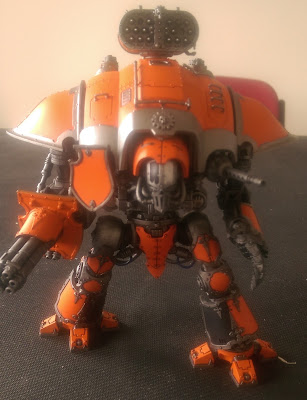 Today I thought I'd take a break from talking about tournaments and post a couple of WIP shots of my first Imperial Knight. You may remember my previous post about magnetising it, so you'll know that I've got to paint all of the bits to make it fully interchangeable.

I'm sure that seemed a good idea at the time but right now I'm wishing I only had one weapon to paint for each arm and the carapace! Still, I'm enjoying painting the model. There's lots of details that I intend to go back and pick out but for now I'm trying to get the basic colours fleshed out.

Before I go any further let me apologise for the poor quality pictures. I took them quickly with my phone so I could post this up and get back to painting in the limited time I have before my son wakes up again!

In a shocking move of creativity I actually decided not to just copy one of the suggested colour schemes from one of the houses mentioned in the codex. I'm terrible for just copying colour schemes and not thinking of my own. My Tau are the exception to this of course but they were a one off compared to my SW, Orks, DA and DE. Speaking of which I really must get round to finishing them...

Anyway, I originally wanted quite a deep orange colour so looking at my colour chart that came "free" in a recent WD I decided Jokaero Orange was a good way to go. It's a base colour so it should cover quite well through the airbrush and it's just the right shade. Well, at least I thought it was. Look at the picture below and tell me in what world the colour on the chart matches the colour in the bottle!?! 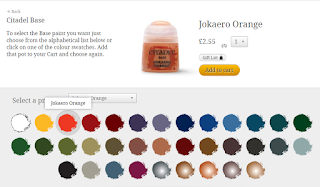 Perhaps it dries darker I dunno but whilst I was looking at it on the shelf and trying to make up my mind I spotted Wild Rider "Red" which is actually orange! Very confusing this paint range! Anyway, I figured I'd give it a shot so proceeded to spray up all my armour panels. I was initially happy with it until I looked at it against the Leadbelcher of the metalwork. It was clearly a bit pinky and my wife said it was "coral" like some of her clothes! Not exactly what I had in mind. I therefore decided to risk Troll Slayer Orange over the top. I'd been worried it would be too bright but I'm actually really pleased with the colour. One problem with it is that on the other panels which I'd yet to spray it doesn't really cover too well straight over Leadbelcher (which I'd painted all of the skeleton and weapons in.

It's not too bad with a couple of coats but I think on subsequent knights I'll try a basecoat of either Mephiston Red, Jokaero Orange or maybe my Vallejo grey primer. Hopefully that'll give a more even coat. I'm still pretty new to airbrushing. I'd love to do a bit more of a blended/fade on the armour panels but again that's something I might try on subsequent knights.

As you can see in the picture below I've followed the Mechanicum painting scheme guidelines in the codex (see, I'm not that original!). 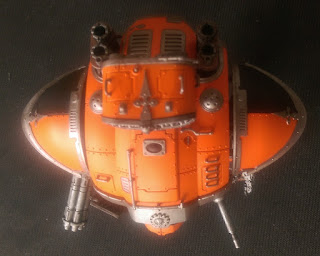 This means Abaddon Black on the shin guards and shoulder pads. This knight will just be a run of the mill type so he won't be given any extra markings for Baron or whatever they're called. Perhaps I'll come back and do them later but for now I want to get the colour scheme down so work can begin on his brethren. 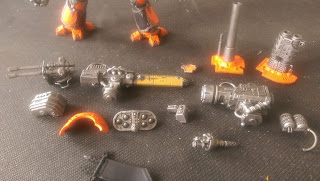 As you can see there's plenty of bits left to paint some of which still need some orange from the airbrush. Just when I think I've done it all I spot some more bits I've forgotten! That's what you get for painting for an hour or so at a time! You can see in the picture that I've started with some Averland Sunset on the sword to give it the black/yellow warning hatching. This will probably makes its way onto other panels too to try and break up the orange a bit. Incidentally I'm looking at these pictures now and realising there's A LOT of orange on there. That's the problem with painting individual panels and not seeing the work as a whole. Perhaps I should throw some white in there. What do you reckon? Any suggestions for breaking things up? There'll be transfers and details of course but he needs something else I think.

I've gone with one of the Mechanicum specific facemasks which will be glued in place rather than magnetised as I've mentioned before. 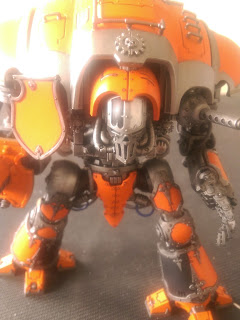 Progress has been a lot slower than I'd hoped. That's partly due to limited time and partly because I'm lazy! I'd better get cracking as this little lot arrived the other day too... 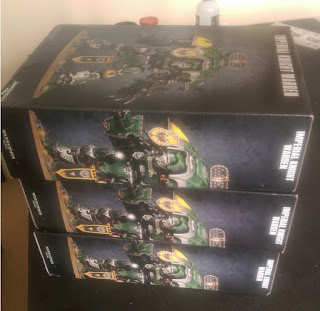 Finally, the name Tangryx unimaginatively comes from Tango (which is an orange soda drink in the UK). I've just got to find a way of creating a house emblem that's easy to paint. 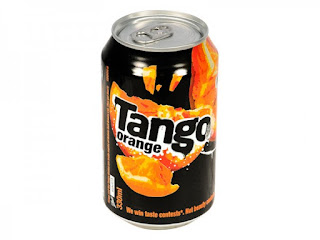 More updates to follow when I eventually make more progress!
Posted by From The Fang at 12:36:00