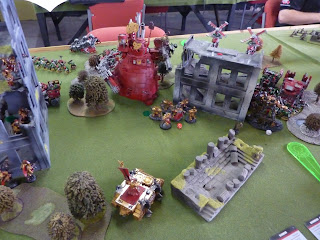 Well I was fully intending to play at BW9 and I'd been desperately trying to find as much time as possible to get my Ork army up to scratch. Sadly I barely managed to get them to three colour minimum never mind the standard I was hoping for when I started them months ago. I was a little apprehensive about playing though as with so many results to process I thought I'd struggle to keep the event running smoothly. It wasn't until I was driving to the event that I actually thought about what a poor choice Orks were if I was hoping to get my games over quickly and get the results sorted.

Fortunately for me Stu Dickson showed up on the day on the off chance he might be able to play. He'd originally been one of the first people to buy a ticket but had been forced to pull out when other plans had clashed. I don't know what changed but suffice to say he asked me if it would be possible for him to play. I was initially tempted to let him play all three games but decided that I wanted to have at least one game as a test of how feasible it was for me to play and act as TO at the same time. I decided that I'd play the second game since there was a break following it and also because I knew the mission was pretty simple to play. Anyway, here's my army:

Battlewagon with reinforced ram (for the Warboss)

I could've made the list a lot more filthy with some extra Meks in the Stompa but I figured the Stompa with 5++ and a 3+ repair was bad enough. The Warboss is nigh-on indestructible with the Stikk provided his opponent doesn't have AP1 or AP2 weaponry. Grotsnik is a funny old character. A lot of his special rules cancel each other out i.e. 6+ FNP and 5+ FNP (!?!?) and he isn't a great choice for BW as he can't leave his unit. I'd have loved to have taken Zogwort but he apparently doesn't exist anymore. Thanks GW! 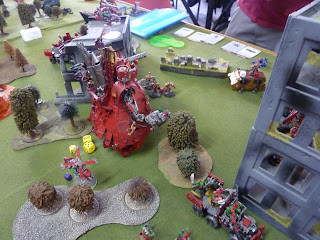 Stu had lost his first round game pretty convincingly so I'd be playing my only game on the second table from bottom. My opponent was Daniel Clarke who was fielding Grey Knights. I was initially confused as I'd seen the army at previous Blog Wars but knew Daniel was new to the event. Turns out he'd bought them from BW regular Nathaniel Gibbs, mystery solved! We were playing Emperor's Relic on Vanguard Strike deployment.

Dan's list was a Librarian (ML3) in terminator armour, 2x "Rifleman" Dreadnoughts, 2x Purifier squads (one in rhino, one in lascannon razorback), 2x 5 Terminators, Interceptor squad and Dreadknight plus an allied Inquisition force of Coteaz (Commander) and an Ordo Xenos Inquisitor. Fortunately for me there wasn't much there that could worry the Stompa so it would depend on how effective the Stompa could be rather than whether or not it would survive.

Deployment
Dan won the roll off and elected to go first deploying Coteaz in and his purifiers in a large ruin and a dreadnought on each flank supported by the interceptors up the middle. The terminators went in reserve. I basically just spread my vehicles out along the edge of the deployment zone giving them enough space to squeeze between terrain pieces and avoid those pesky immobilisation rolls. 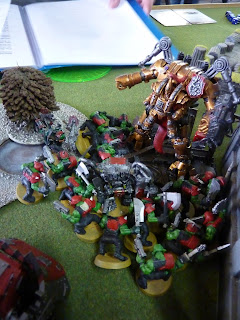 The librarian managed to roll Vortex of Doom so Dan decided to go all or nothing with his terminators and deep strike them in right in front of my Stompa. It was quite a gamble as he not only needed the power to cast successfully but also the blast not to scatter followed by a 6 on the destroyer table and a further 6 for the D6+6 hull points. Sadly for him the blast scattered just off the Stompa leaving the terminators badly exposed. The dreadnoughts managed to strip hullpoints from one trukk on my right flank and between the razorback and dread another trukk was wrecked (I managed to ramshackle the a pen to a glance!) giving him a point for First Strike. Elsewhere the dreadknight teleported forward to incinerate a handful of Orks who were mounted up in their transports (stupid template rules!).

The Orks responded in predictable fashion by charging up the field towards the Grey Knights. The shooting from the rest of the army missed completely but the Stompa made up for it. The deffkannon hit its target and killed off 3 terminators (it might have been more but for Sanctuary). The supa-gatler stripped hullpoints from the rhino and a supa-rokkit killed an interceptor in cover. The Warboss jumped out of his battlewagon followed by his boyz and with help from the boyz in the nearby trukk they charged the Dreadknight. The dreadknight issued a challenge which was accepted by the nob from the trukk and then it was the Orks turn to throw out some damage. The boyz managed to score 6 wounds between them but the Dreadknight shrugged them off. The Warboss inflicted 4 wounds with his klaw but two were saved. I was still hopeful Grotsnik would finish the job but all 4 of the wounds he caused were saved thanks to Sanctuary. The Stompa managed to roll 3 for his 4" charge so the terminators would get another chance with their vortex. 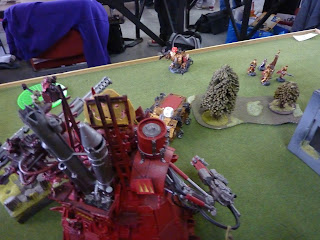 The first vortex scattered off the table but another wasn't far behind. This time it was a hit but only 2 HPs worth of damage was inflicted. The remaining terminators arrived by deep strike but a mishap caused them to be displaced to the back corner of the board out in the open. The psycannon from the nearby purifier rhino was able to take another hull point though. The dreadknight was able to kill off Grotsnik but finally fell to a single wound from the boyz and a final wound from the warboss. The dreadnought took a wound from one of the koptas whilst the other killed off some boyz. Meanwhile the interceptors shunted across the board towards my objective. 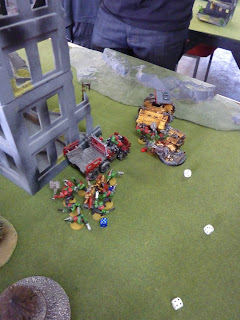 One mob of boyz on the right of the field charged into Coteaz's unit and killed all but him and a single purifier for minimal losses. The other mob nearby charged and wrecked the razorback without the nob needing to use his power klaw. The Stompa continued it's good fortune hitting with its deffkannon again. This time the displaced terminators were the victim with not a single successful invulnerable save. The supa-gatler was able to immobilise the other dreadnought and kill off some of the purifiers who'd lost their rhino to the deffkoptas. The Stompa then charged into the librarian and his terminators with help from the warboss' unit. The terminators were cut down by the Stompa's mega-choppa and the warboss' power klaw with little return damage. The remaining unit of boyz charged at the interceptors but were easily cut down and caught in a sweeping advance as they fled.

Turn 3
The dreadnought charged into the orks who'd wrecked the razorback and killed most of them off. The nob wasn't able to damage it in return. The other boyz nearby finished off Coteaz. The interceptors now charged and killed a nearby deffkopta. The GK forces were starting to dwindle at this point so Dan tried to consolidate them onto his home objective taking out a trukk that had parked on it. 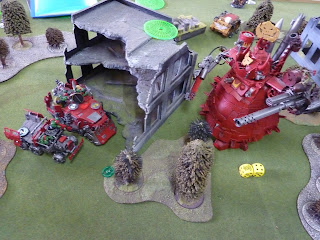 The Stompa turned back towards the Ork lines to finish off the interceptors with a combination of deffkannon and supa-gatler (which still hadn't whirr-click-click'd!). The remaining empty trukk moved in to seize the Ork objective whilst the battlewagon headed across the board in case the Warboss was needed.

Turn 4 & 5
The game was all but over by this stage with just the immobilised dreadnought to finish off and the other one joining the Ordo Xenos inquisitor on the home objective. The remaining Orks on the right killed off the dreadnought in combat but were then cut down by the purifiers.  The Stompa swung back around again and helped finish them off though whilst the Warboss claimed the central objective. Finally the only remaining deffkopta came in to seize the objective and it was game over. 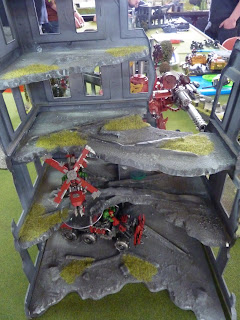 There's no question that the Stompa had performed well above expectations. The deffkannon only missed with its final shot of the game by which time it really didn't matter. The supa-gatler kept rolling high for it's shot count without running out of ammo and despite failing a charge the Stompa was responsible for killing two units of terminators (with a little help). It was a bit of an unfair fight though as Dan really couldn't deal with it. The vortex was a long shot but the only chance he had so he needed to take it. Sadly this meant that he brought his forced towards the Orks.

I really think that was the big deal here. If he'd holed up in the ruins and forced me to head across open ground to get to his objectives it would probably have been a very different game. As it was though it made the game more enjoyable and I got to experience the best from the Stompa. I don't really expect it to perform so well again though!

I enjoyed my only game thanks to Dan being pretty reasonable in the face of an amazing performance from the Stompa and I'd like to thank him for his patience whilst I dealt with rules queries from other players. It's a shame I didn't get to play more games with my Orks but frankly the tournament would've been well behind schedule if I had and more people would've noticed how little progress I'd made with painting my army!!
Posted by From The Fang at 17:00:00