Yesterday was the ninth (!) episode in the Blog Wars saga with a record attendance of 48 players (two players cancelled at late notice due to sickness). With around double the attendance of BW8 it was a real test of my organisational skills. Nevertheless I think the event ran pretty smoothly we started a little later than scheduled since a few players arrived late but generally speaking I thought it went well. Of course, I never really know how it went until I get the feedback from you guys though. As ever, I'll be posting about what I think worked and what didn't at a later date and I want to hear the same from you guys too.

I was originally planning on playing but, as you'll read in a later post, I only played in round two. This gave me an opportunity to see how feasible it is to play and run the event at the same time. It's never really been an issue at previous events (okay, perhaps once!) but certainly with this number of players even the one game I played caused the next round to be delayed. This was partly down to my choice of Orks for my army but I still finished my game with 20 mins to spare but the sheer number of results that needed entering meant I still didn't get them done within the time. I think if the event continues to attract these numbers I won't be playing in future.

There were some really strong lists in the mix. This was the first time I've allowed Lords of War (i.e. Super Heavies/Gargantuan Creatures). As I posted about before the event there were around two thirds of the lists that didn't feature any Lords of War at all but even with a relatively low uptake I think they made a big impact. The four lists that featured 3 Imperial Knights all finished within the top 20 but only one of them managed 3 wins out of 3. Speaking of which here's the final results: 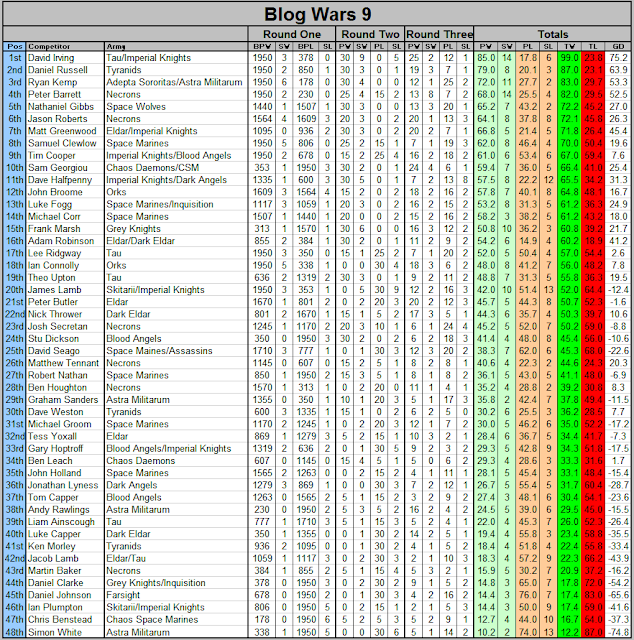 As usual these have been added to the results archive. As you can see David Irving and his combination of Tau with 3 Imperial Knights ran away with it. He played Ryan Kemp's Adepta Sororitas in the final round but even with tons of melta Ryan wasn't able to stop the knights. It's worth noting that David wasn't running the Baronial Court but rather the Household Detachment. He was, however, using Gerantius (although not as his Commander SC). I think it was the combination of crisis suits (including Farsight) and 3 IKs that proved unstoppable. Without any prompting from me David himself told me he never wanted to run 3 knights again as it wasn't much fun for him (never mind his opponents). I'd still like to congratulate David, Daniel and Ryan though!

For me at least, I think allowing up to three Knights in a list was a mistake. I don't think they'd be ridiculous at a normal competitive event but Blog Wars isn't like other tournaments. Some of the filthy lists that you see at other events could probably deal with the knights (and some are probably designed for that very purpose). Those kind of lists just don't appear at Blog Wars though. However, like everything I do at Blog Wars I'm not going to make a change like that without hearing from you. I got some verbal feedback on the day but I'd love to hear what you think.

I'll be covering the painting competition(s) in subsequent posts but I thought I should mention the raffle. The winners were:


Remember, entry into the raffle is included in the ticket and all of the prizes were worth more than the entry fee. I think we know who the real winners were then!

Conclusion
I had my concerns that I'd sold too many tickets and the atmosphere wouldn't be the same but generally speaking I think it was still as good as ever. There was a decent mix of about 2:1 veterans and first timers which I think helped.

I was again amazed at the standard of the painting competition and, of course, I'll cover that in more detail later. The extra prize for Best Conversions worked to an extent but I'll go over that in depth in the discussion post.

As I've already said, I really want your feedback on the event and on the "Imperial Knight issue" in particular. Do you think 3 is too many? Was it the formations that were the problem? Was it simply a case of rock/paper/scissors? Do you think Lords of War should be banned completely? Whatever your opinion on anything, I genuinely want to hear it. Help me make the next Blog Wars even better!

Speaking of which, the next one is on Saturday November 7th. Hopefully see you all there!
Posted by From The Fang at 19:39:00