There's probably going to be a delay to the scenery project for a while since I've got to get my Blog Wars army sorted as a priority. Still, I've managed to add another couple of pieces to the completed pile. All of this stuff needs some protective varnish but I'm putting that off as I'm convinced it's going to ruin it all! I've got a can of Purity Seal waiting though and I'll test it on one of the ruins first to make sure it doesn't do anything drastic. If all else fails I'll pick up some matt varnish that can go through my airbrush. Anyway, onto the bastions: 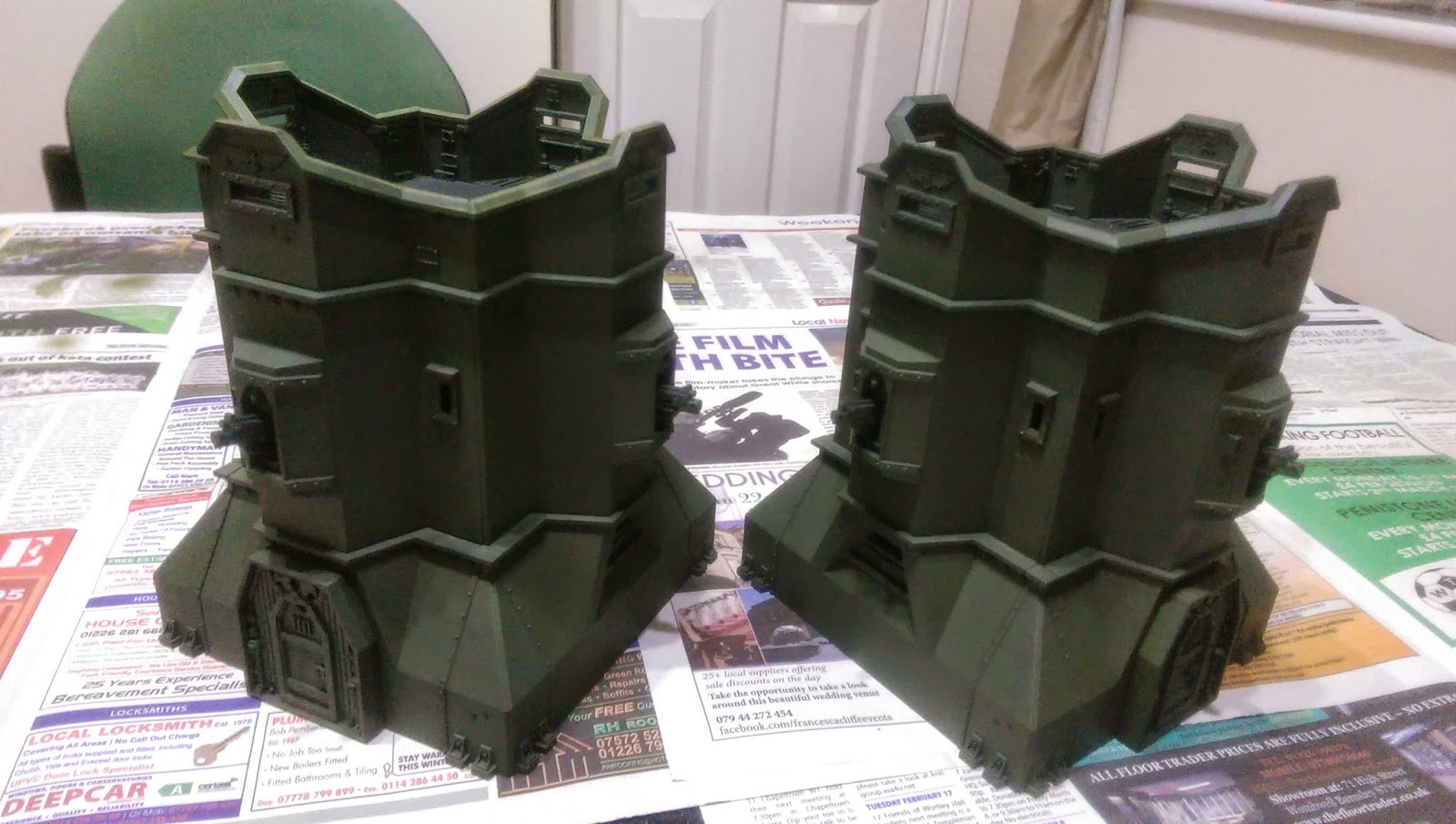 I started off with a basecoat of Catachan Green/Castellan Green through the airbrush. 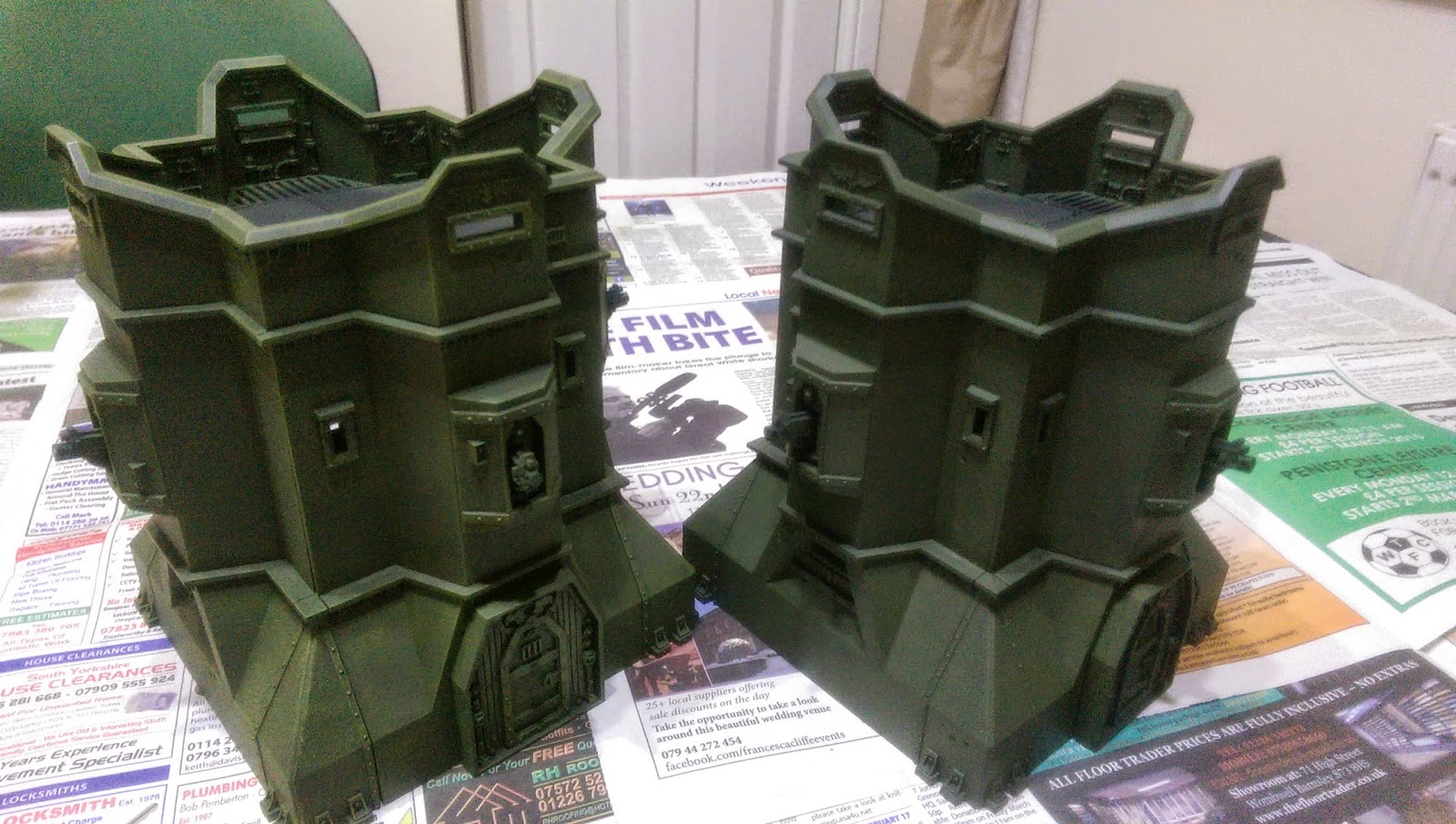 I then drybrushed some Camo Green over the details followed by some Leadbelcher. 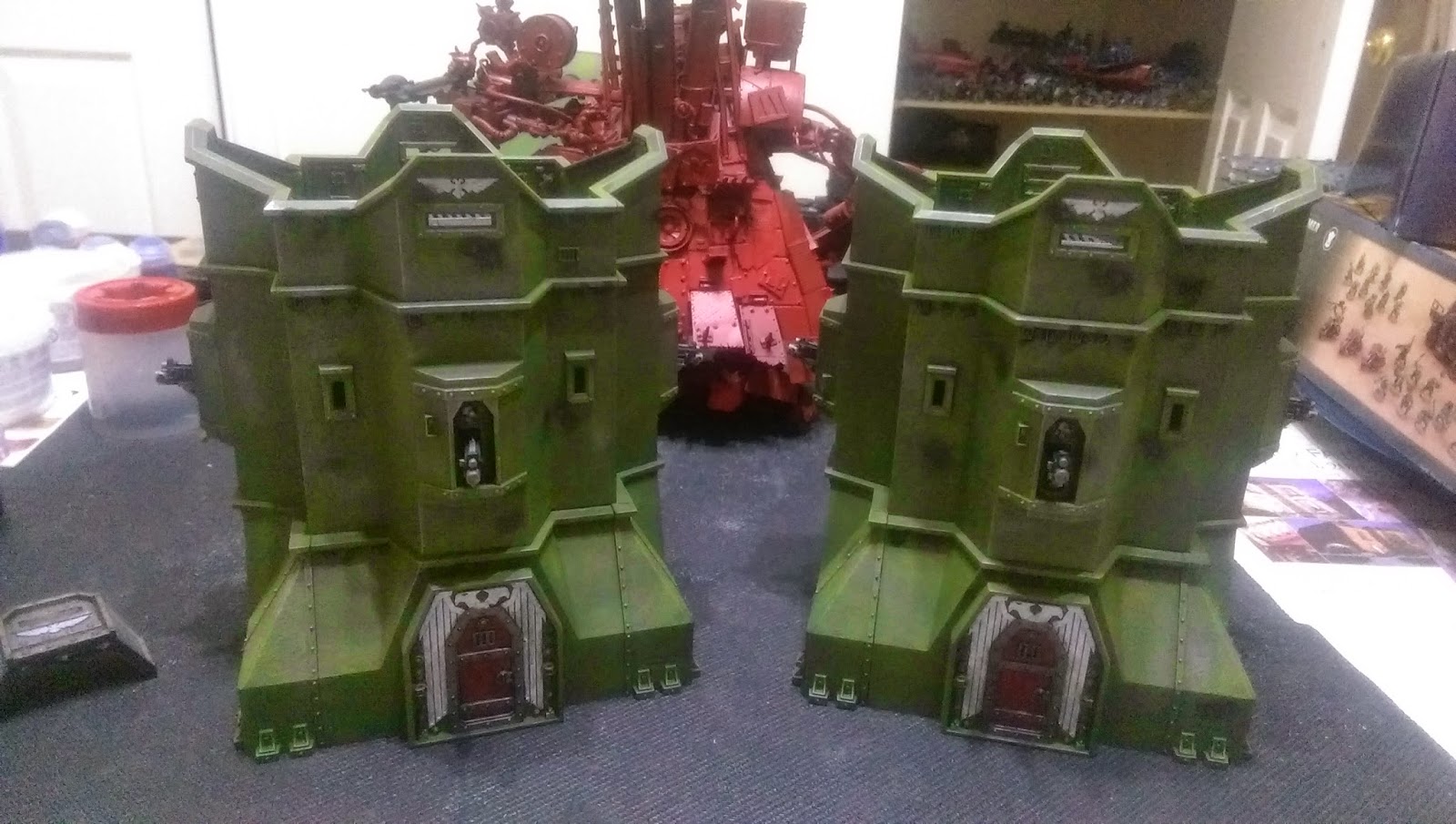 I painted in some details like the aquila around the door in Ceramite White and the door itself in Mephiston Red with Leadbelcher metalwork. I also painted the heavy bolters with Abaddon Black and more Leadbelcher (for the skulls above the bolters too). Finally I painting the floor on the battlements with Leadbelcher before applying a wash of Nuln Oil to all the metal work and some Agrax Earthshade to dirty up the floor a bit. 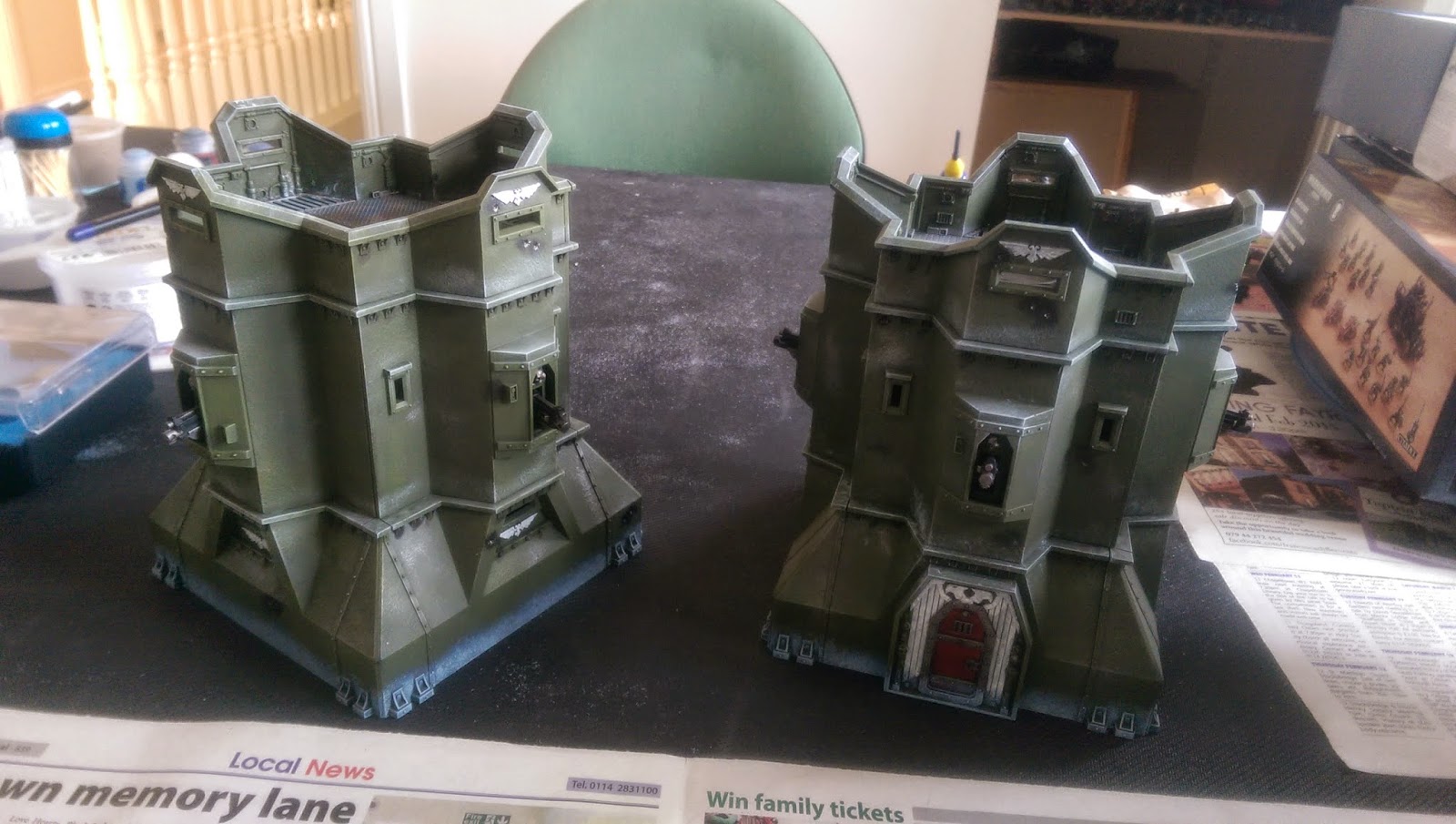 Now it was time to make them look more wintry. I hit the bottom of the buildings with a drybrush and successive layers of The Fang, Fenrisian Grey and finally Ceramite White. I also hit the top surfaces of everything with Ceramite White as this is where the snow will go. 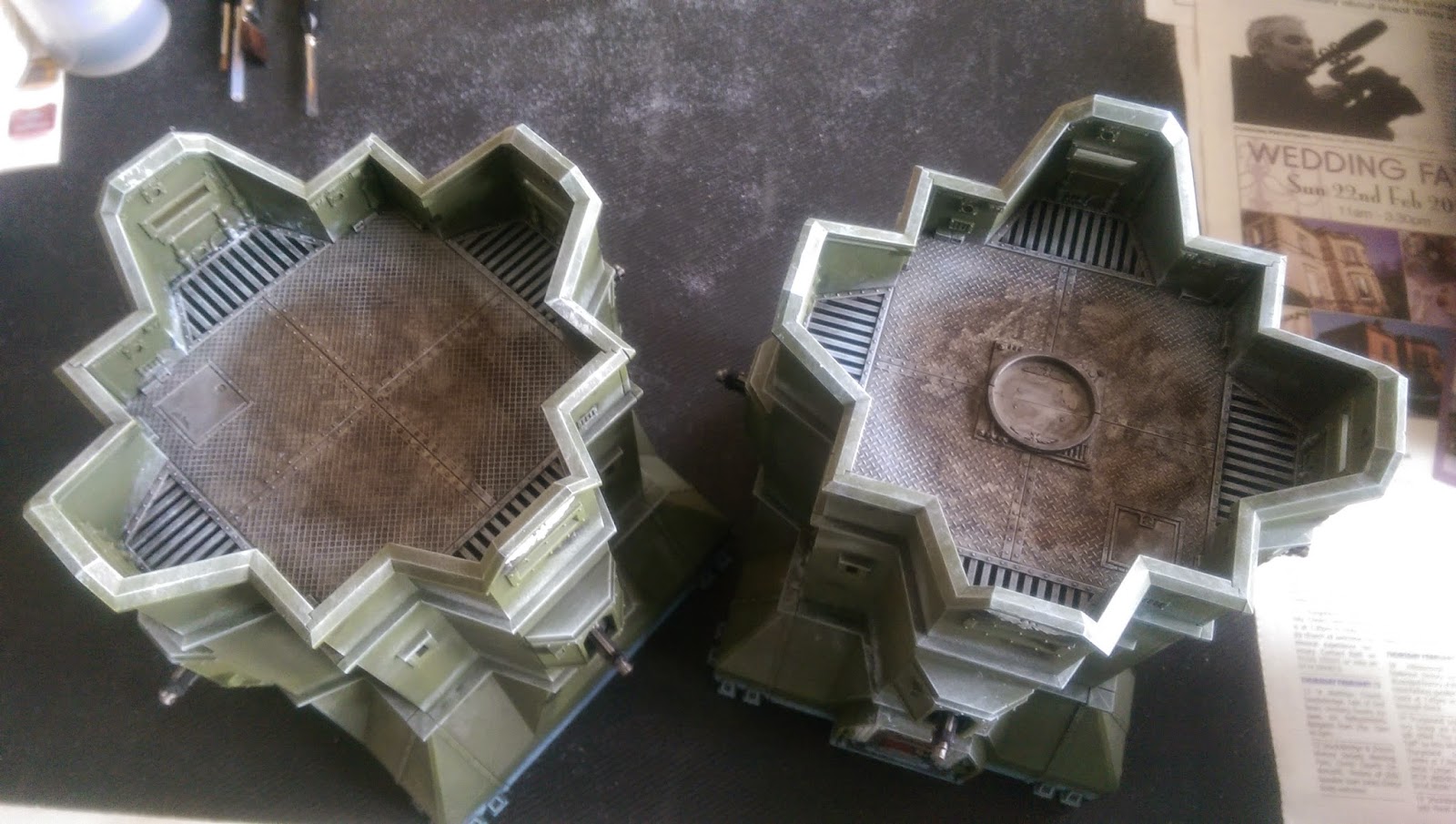 You can see here that I've focussed the white drybrushing around the edges where the snow will go and you can see the muddy look the Agrax Earthshade has given the top. I deliberately applied in in a messy fashion to make it look, well, messy. 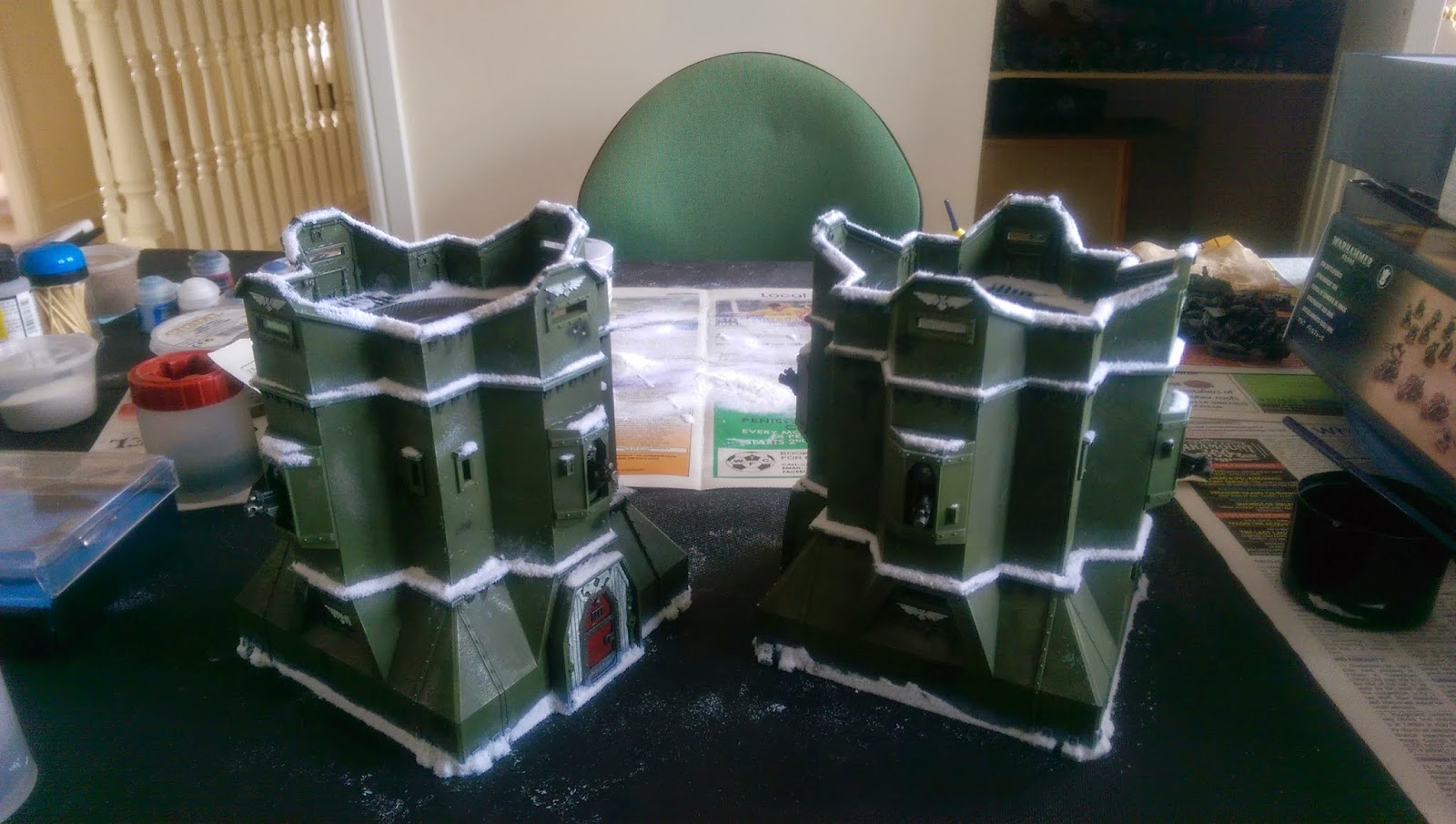 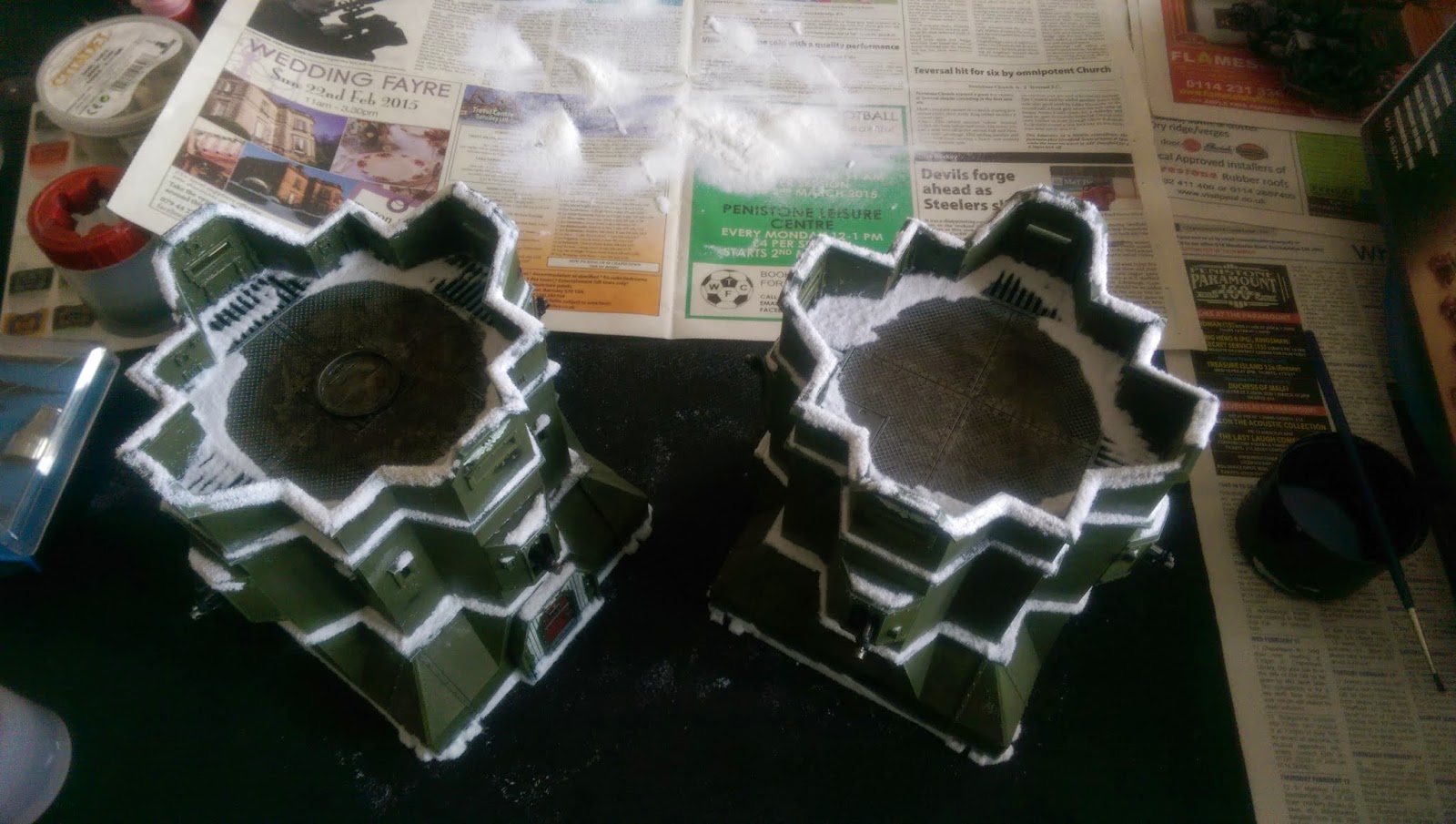 Here are the final shots of the Bastions with snow added. There isn't really anywhere to put any grass tufts so none of those this time around. I had thought about basing them but if I ever want to use them in a tournament that might cause issues. I may change my mind at some point but it won't be a big deal to paint a base up.

Finally, I thought I'd take some shots of my current stash of winter scenery on the mat. I'm extremely happy with what I've done so far. It's not perfect of course but it's a huge improvement on the old grey or black scenery we were using before. I'm considering applying a watered down coat of Drakenhof Nightshade wash to the snow flock to make it more like the colour of the mat but I'll need to do this on some test pieces to make sure it isn't too detrimental. 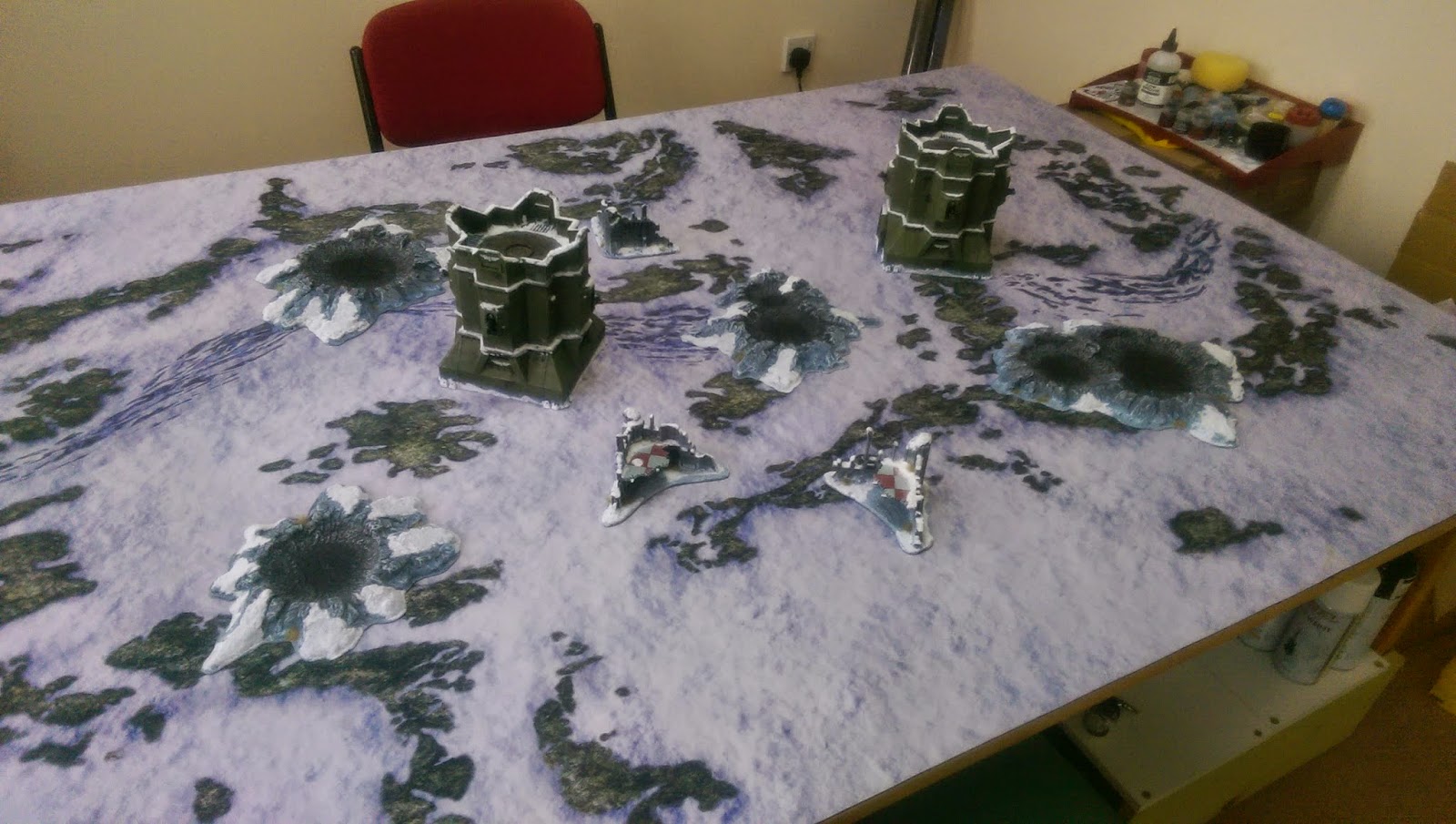 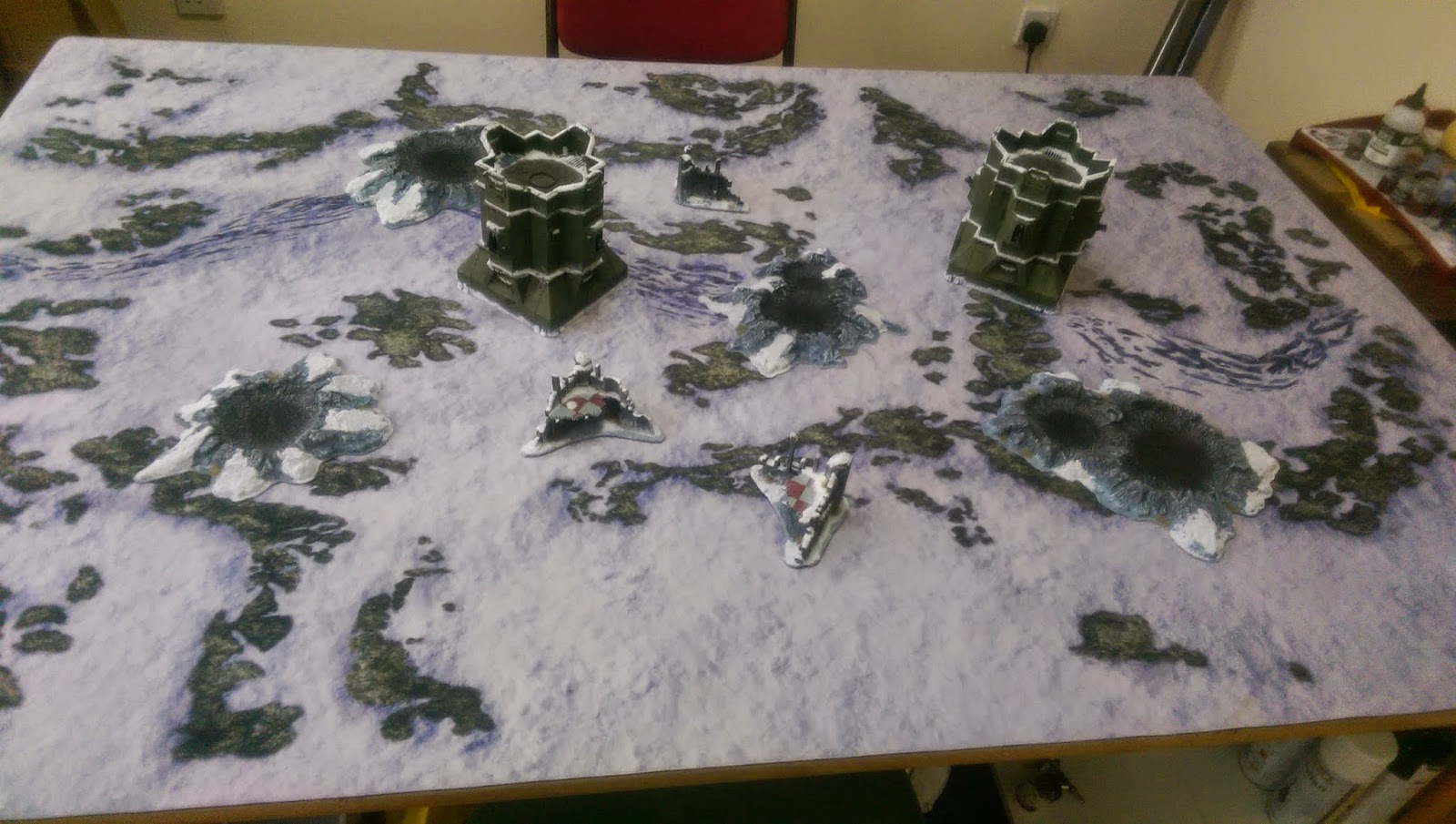 As I say, I'm now going to be focussing on my Blog Wars army but I'll probably do a couple of scenery pieces here and there to break up the monotony. I'm particularly keen to make some rocky outcrops and/or large ice crystals. I'd also like to keep my Citadel Woods in their current colour scheme to avoid the time I put into them being a waste. That means I need some other foliage so I'm on the look out for some aesthetically pleasing but reasonably priced snowy fir trees. I hope you're enjoying this series of hobby articles. It's a refreshing change for me to be talking about painting rather than just rules and tournaments.
Posted by From The Fang at 17:00:00