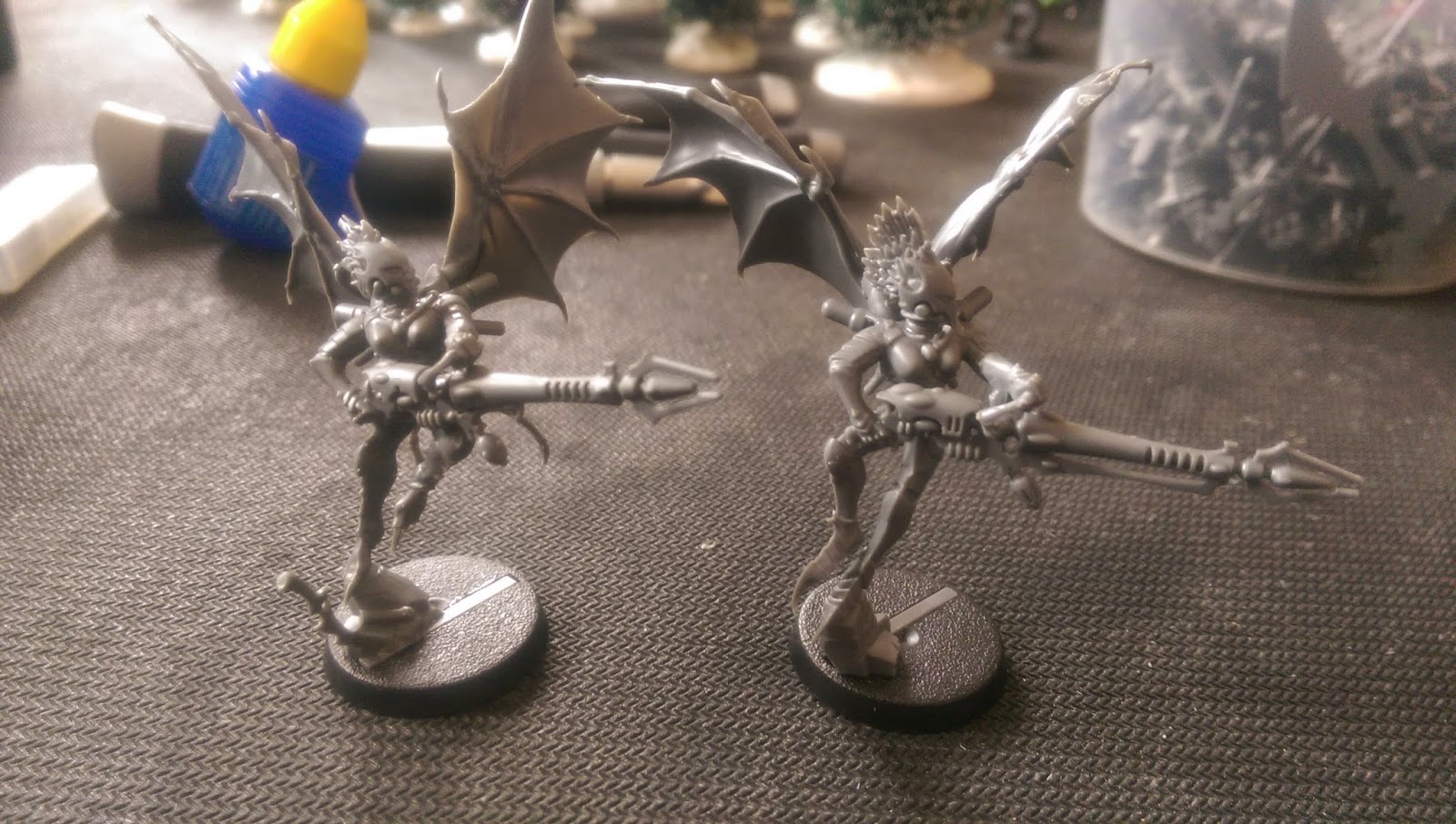 Scourges are T3 with a 4+ save and therefore not the most durable unit in the game even when FNP kicks in. That means two things, firstly, you want to keep them at a decent range to avoid return fire and keep them away from charges. Secondly, you want to keep them as cheap as possible. This is generally a good idea in a DE list as everything is flimsy so piling tons of points into one unit is a waste.

Obviously you want to replace their shardcarbines with something else why take them? The shredder and splinter cannon are fine for anti-infantry but your DE army in general doesn't struggle with that. What you need is anti-tank. Blasters and dark lances are too pricey so that leaves the heat lance or haywire blaster. Coming back to what I said about range you might think there isn't much to choose between the two but remember the heat lance is only S6 so you need to be within 9" to have a hope of doing something to a vehicle. I'd have no issue putting Reavers that close but not Scourges. Outside of 9" you're needing 6s to glance AV12+ which would be penetrating hits for the haywire blaster. Obviously you can't one shot a vehicle with a haywire but with the change to the damage table a heat lance isn't much more reliable. To me then, the haywire blaster is the only option.

Again, as I've said before, the trouble is you only get one per box. Here's what I've come up with as an alternative. I wanted to create a gun that looked as close to the real thing as possible. There are some great conversion ideas on the net using the heat lance with extra blades but I wanted something that was more convincing. For this I used the haywire blaster barrel from the Talos/Cronos kit (I have four spare since it's a twin-linked weapon and I put heat lances on my Talos). 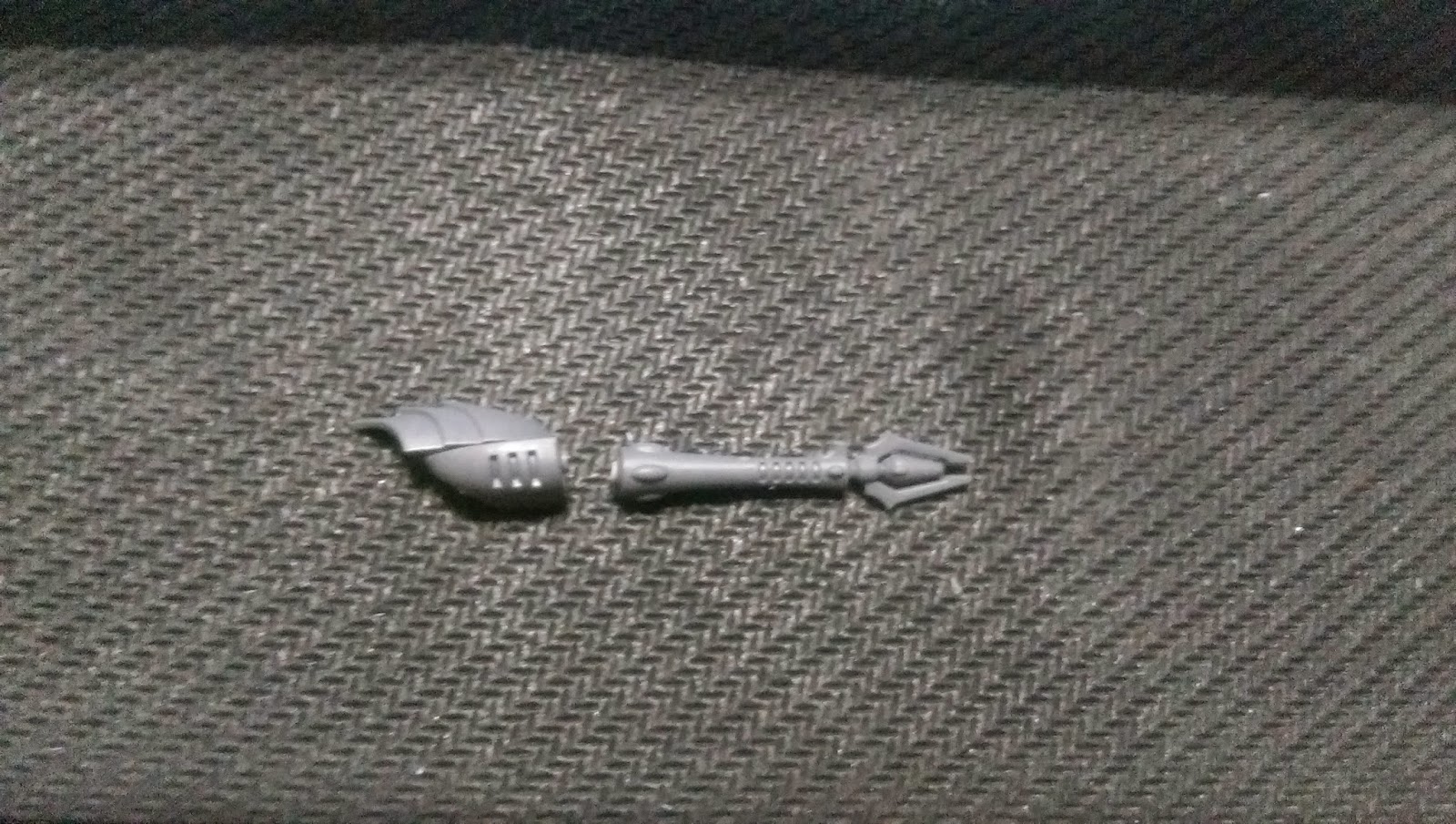 The barrel is simply cut from the mounting as shown. 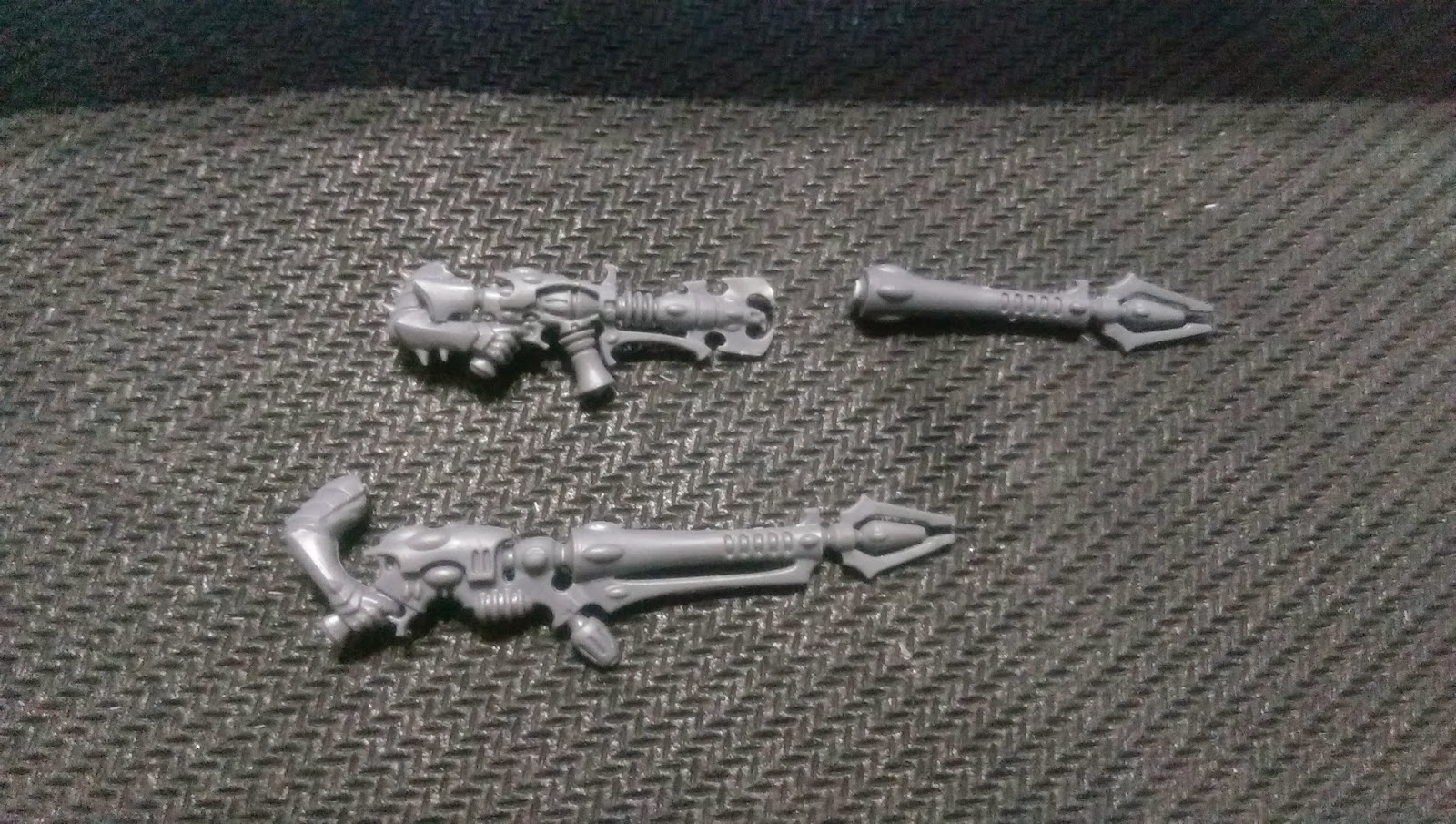 My first idea was to use the stock from the heat lance. I carefully cut around the, err, sticky out bit (?!?) under the barrel before cutting the barrel from the stock itself. 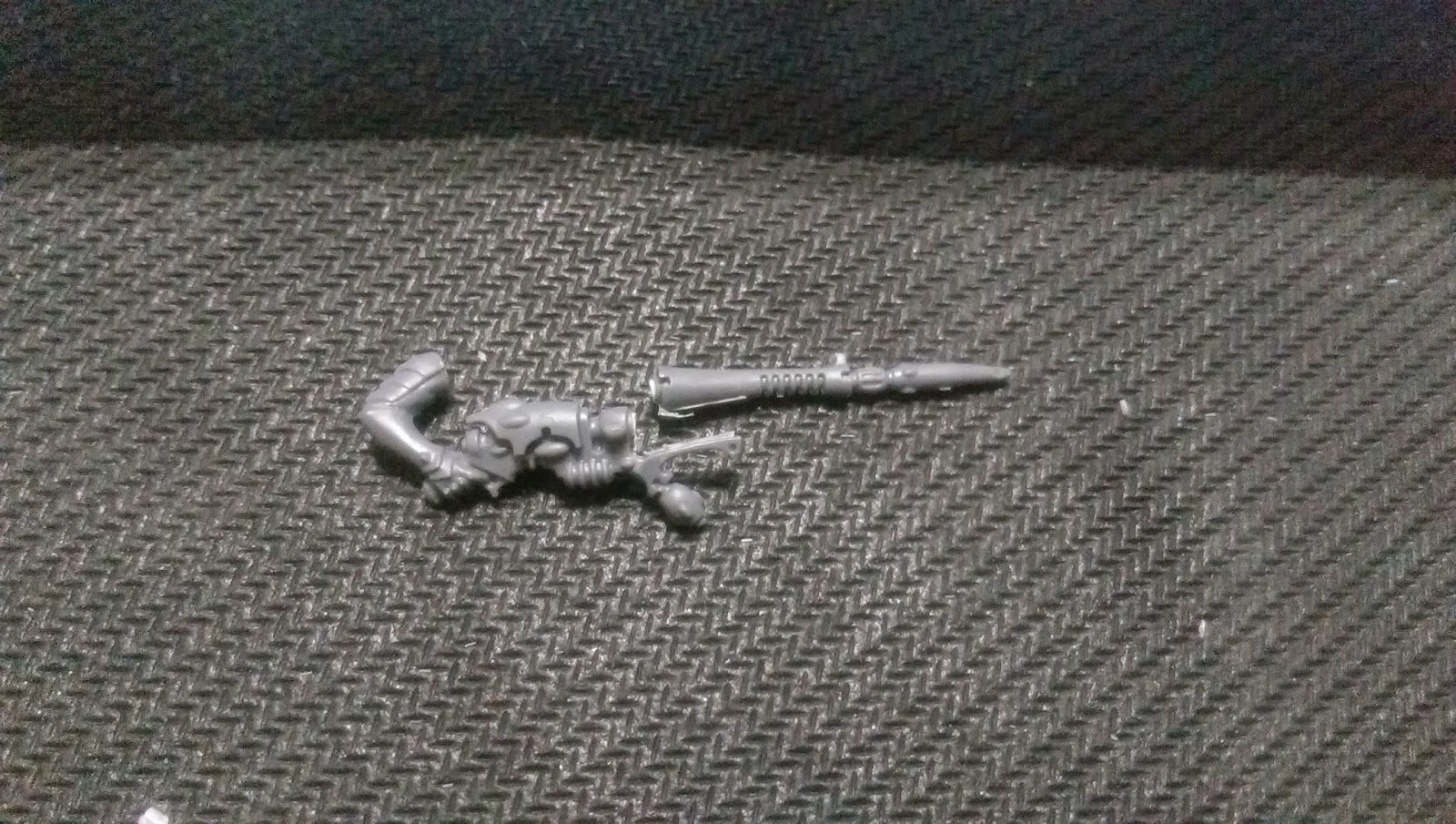 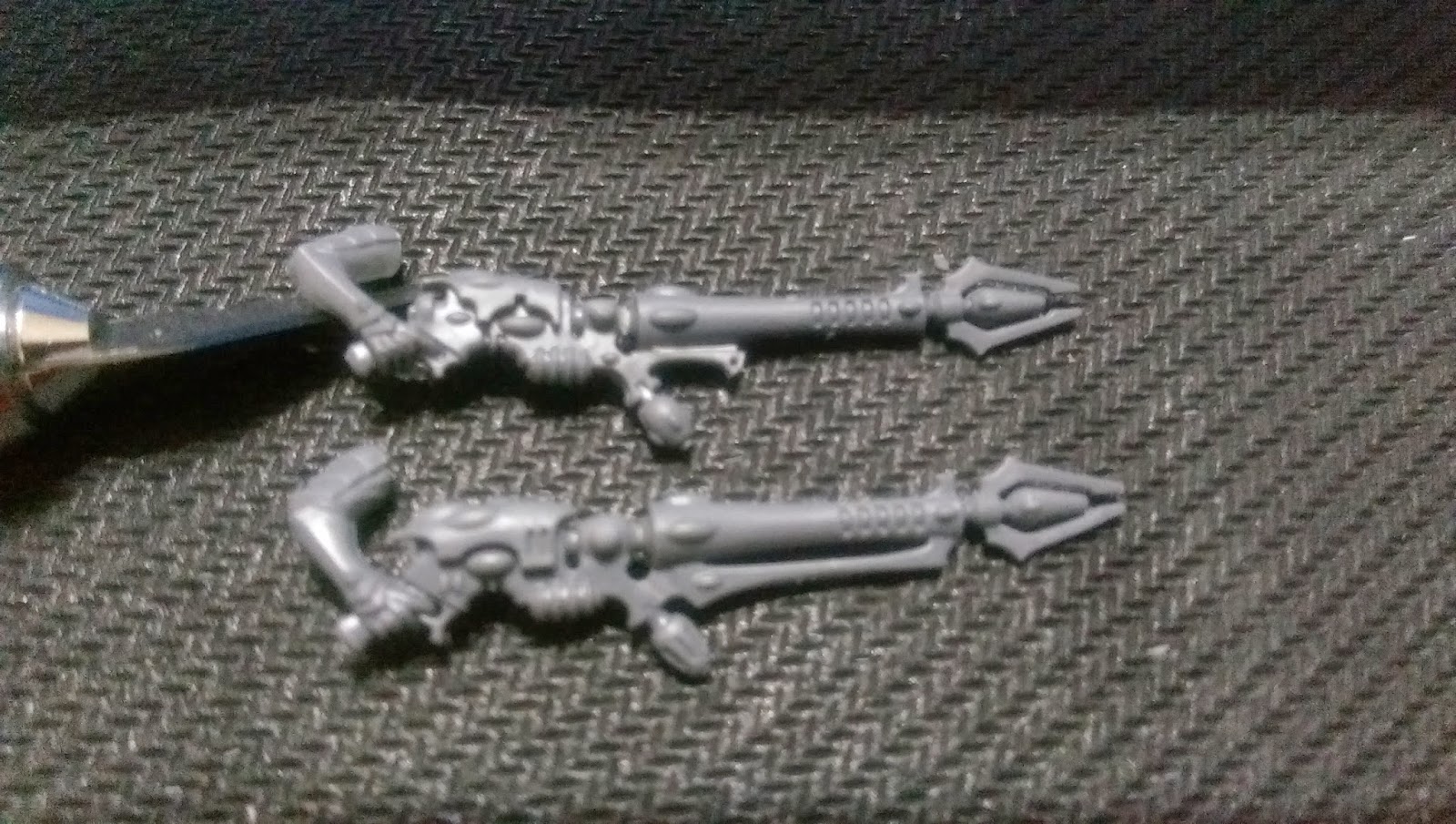 Here's a side-by-side comparison before I glued the barrel in place. You can see it's pretty much the same length and apart from a longer "sticky out thing" (that's what she said) it's barely any different. This would be perfect apart from there only being a single heat lance in the box too. Short of getting hold of more, I need an alternative. Nick commented on Thursday's post to suggest using the stock from the shredder. 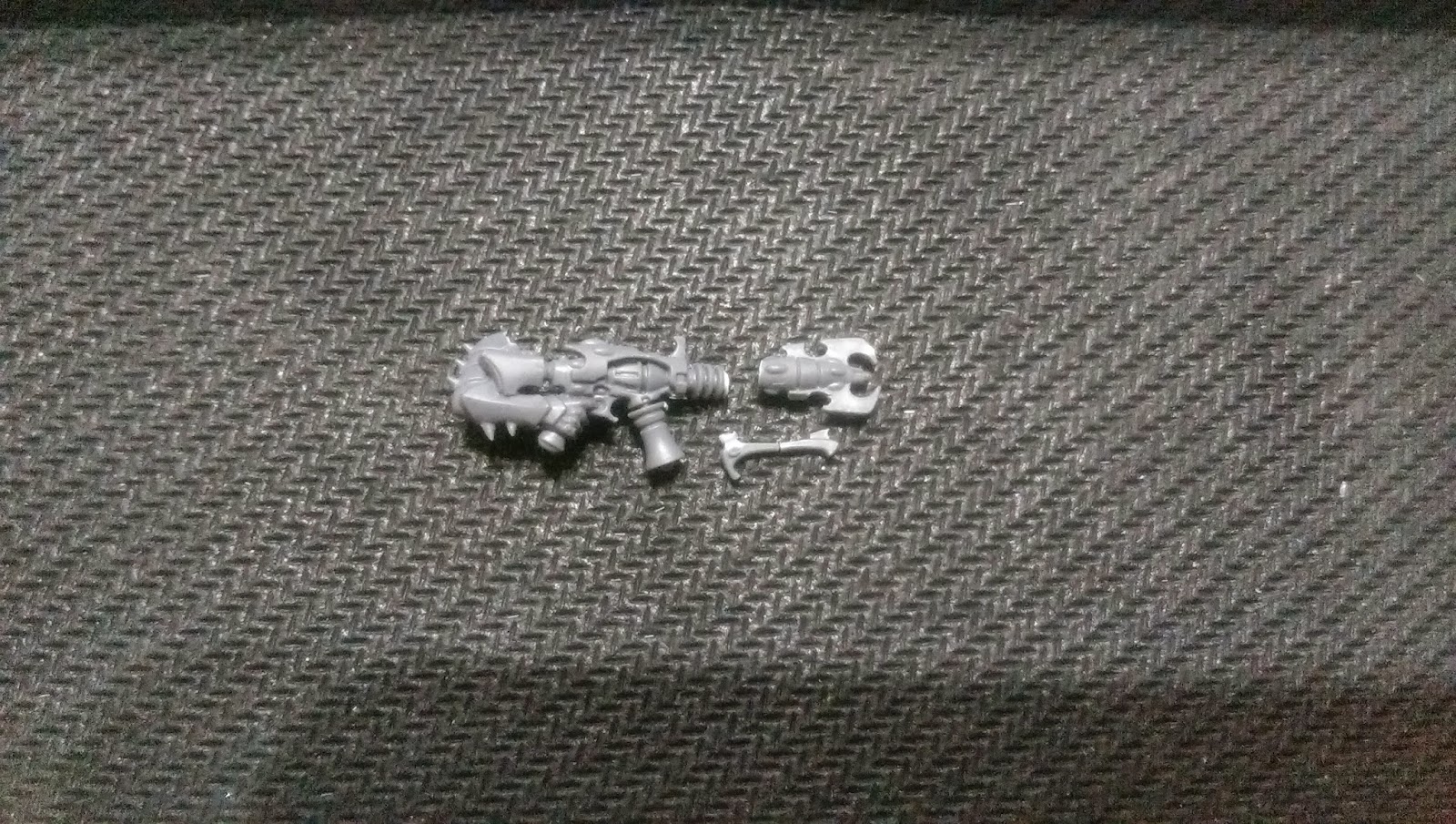 I unfortunately couldn't keep the "sticky out bit" (which is probably a handle) in one piece but, as you can see below, attaching the barrel to the shredder stock would be simple and would give a gun of about the same length. I think the difference is more noticeable though and the converted gun reminds me of the M4A1 from Counter-strike! 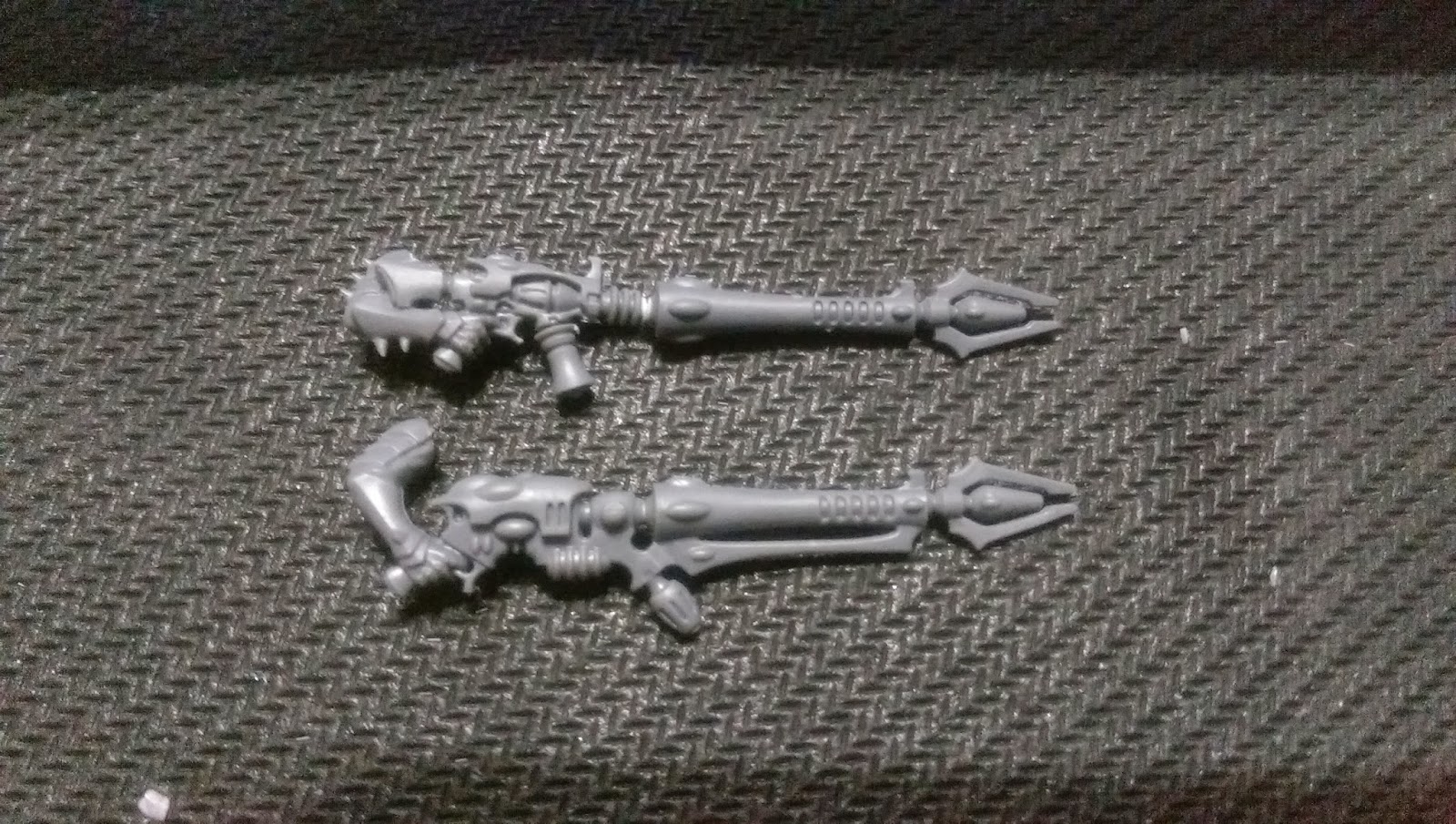 The other issue is that the gripping hand for the shredder sits underneath the weapon making the difference more noticeable. The heat lance has the same top mounted handle making it less obvious. 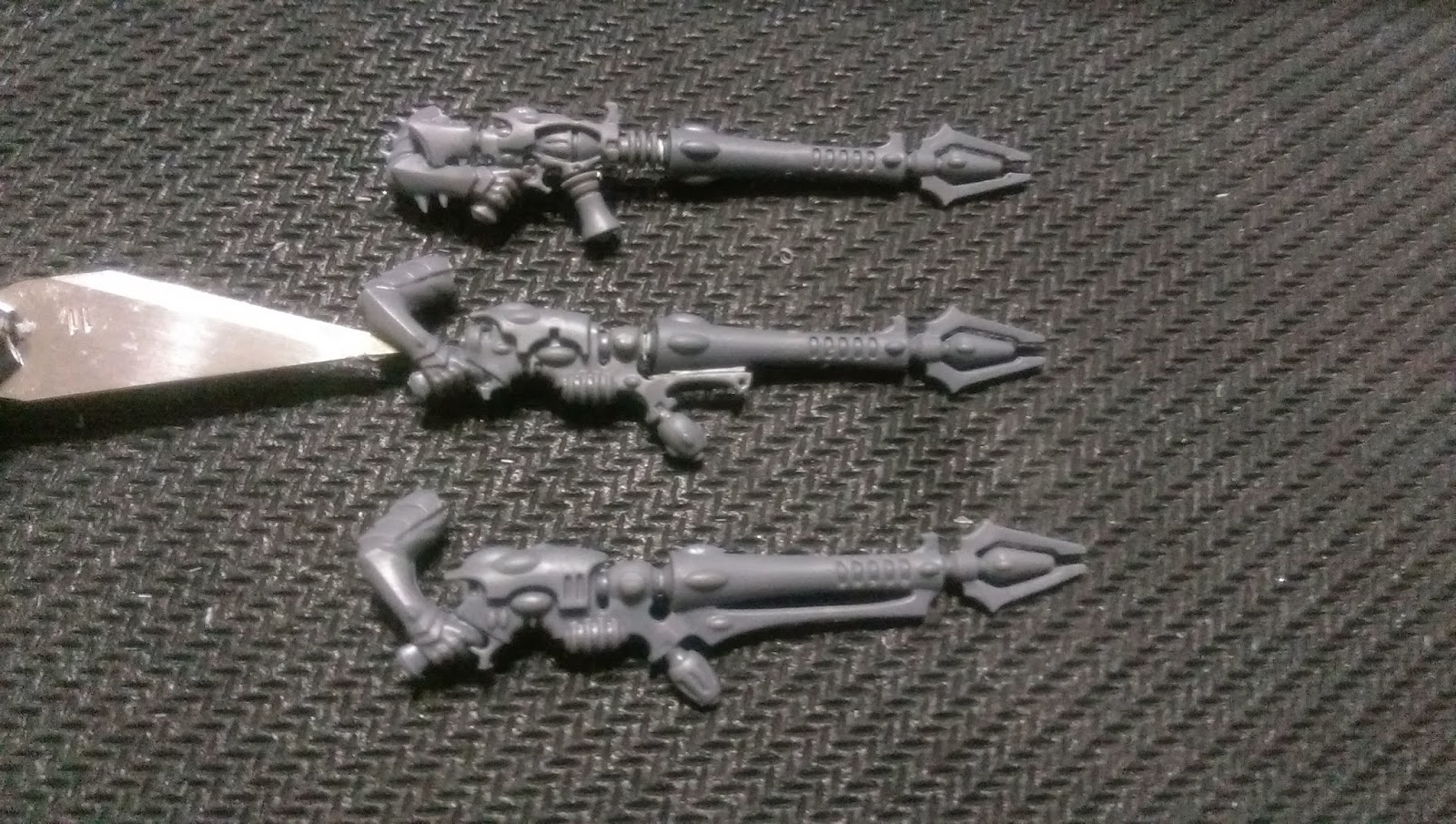 Here's the final shot of the original weapon on the right with the conversion on the left. When they're painted up and sitting across a table from you I defy anyone to spot the difference. By the way, the thing that looks like it's hanging from the converted blaster is part of the wings that the camera has made look like part of the gun.

Ultimately I'll probably try to get a full squad worth of proper weapons (I'd only need two more) and then two more heat lances and then have two squads made up entirely of the same version. That way I doubt anyone would notice and I'll have a subtle way of telling the squads apart. What do you guys think?
Posted by From The Fang at 16:51:00