This section looks to be pretty crowded but appearances can be deceptive. The new trend of including transports in the Fast Attack section that started in the Ork book is continued here meaning this section is artificially bloated by the Rhino, Razorback, Drop Pod and to an extent the Stormwolf. I say "to an extent" with the Stormwolf because as we'll see it's quite reasonable to take one empty whereas you aren't likely to do that with a Rhino. Otherwise there's nothing new in this section but what's there has changed in subtle ways. 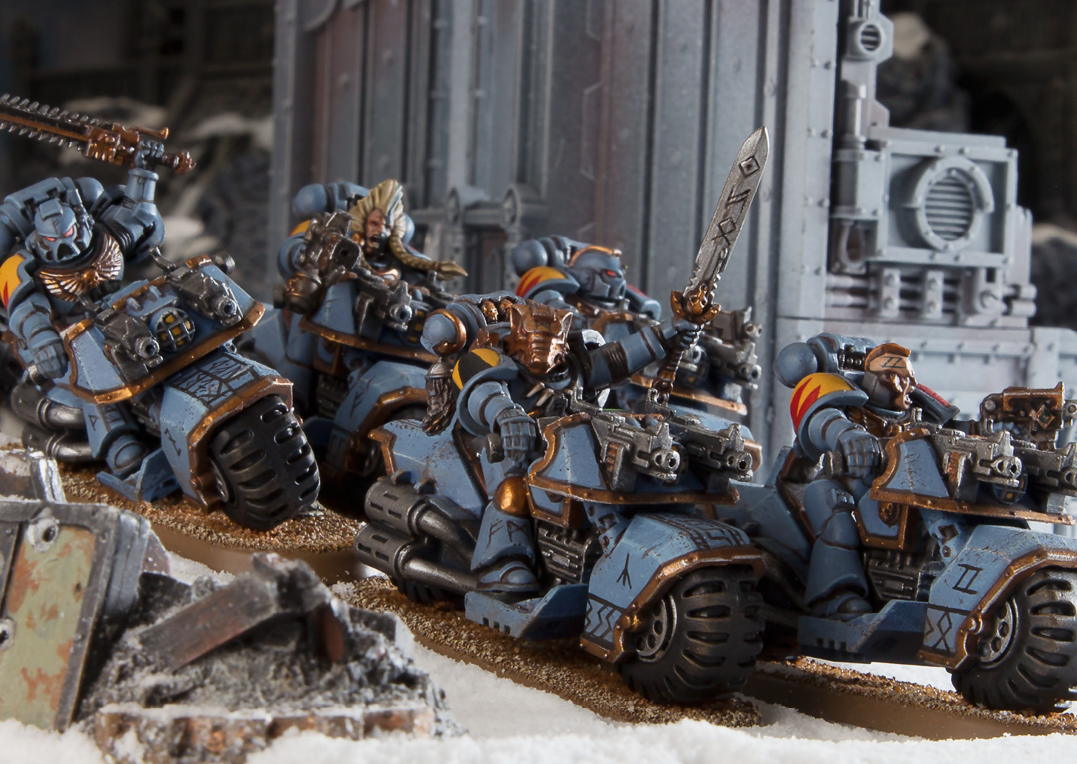 Each Swiftclaw is a whopping 20% cheaper making them a point cheaper than a standard Space Marine biker. That's pretty good when you consider the bike goes some way to mitigating their lower BS with it's twin-linked bolters. Sadly this reduction in price comes at the expense of a loss of a melee weapon meaning they now swap their pistol for a chainsword instead of simply having both. That means one less attack each unfortunately. This to me is a huge shame as had they kept their second weapon I could really see a roll for them as, like the Blood Claws, they've benefited from the removal of Headstrong and changing Berserk Charge to just simple Rage. To me they're still what Space Marine bikes should be. They should be about getting stuck into the enemy in combat rather than sitting at range like Ravenwing ended up doing thanks to their banner.

You can now easily get a Wolf Guard into the pack without paying a premium, in fact the vanilla WG Bike Leader is 23pts cheaper than he would've been in the old book (mostly due to a reduced cost for bikes). You could feasibly make a decent combat unit with the basic squad plus a wolf guard. I'd probably steer clear from the special weapons with the possible exception of the flamer as there are better ways of getting melta shots. At 10-man squad including a WG with a power fist comes in at just shy of a LR Redeemer and can put out 27 standard attacks and 3 power fist strikes. Not bad at all really. Their problem will be the competition from TWC though.

Rhino, Razorback & Drop Pod
Nothing especially new here but worth mentioning them as you can now take them for units which couldn't get access to them easily before. For example, buy a Drop Pod and stick a Lone Wolf in it. Generally speaking I'd still expect to see a lot of drop pods in SW armies. I think there's actually an argument for the use of rhinos/razorbacks again as they're a bit harder to shift than they were in 6th and offer some protection from the anti-infantry firepower some armies have. 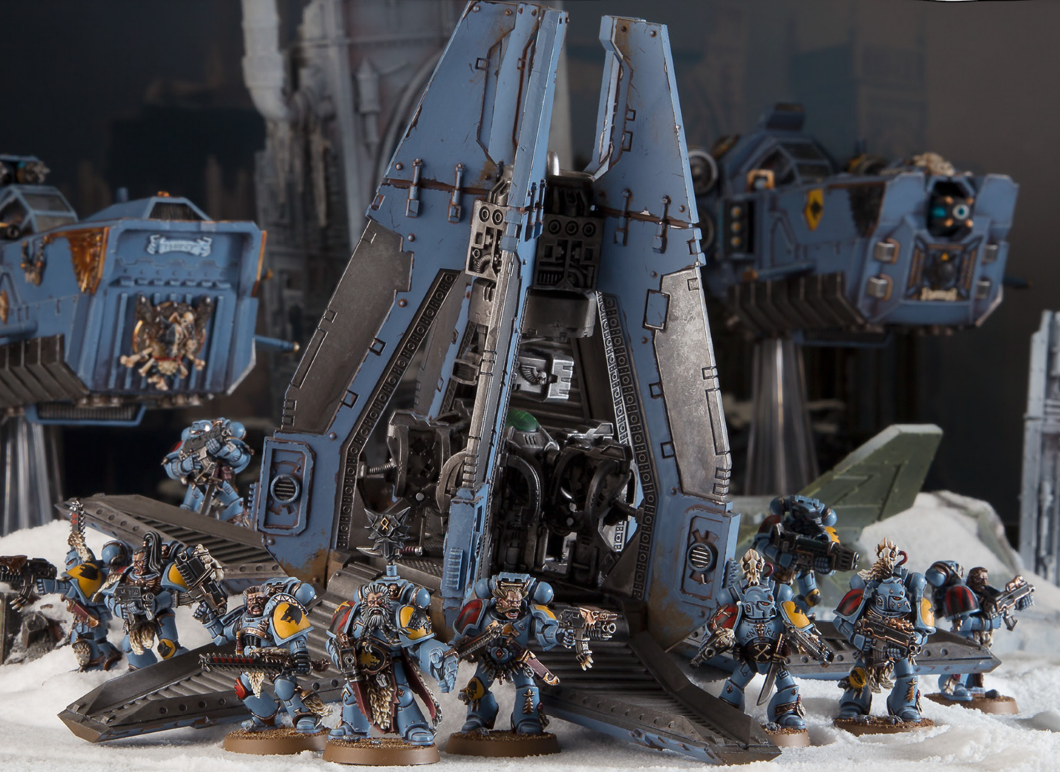 The razorback pricing is now in-line with other books in that the basic heavy bolter variant is more expensive but the other weapons work out the same cost except the heavy flamer which is 10pts cheaper. As I say, same as the SM book. Similarly, extra armour and hunter killer missiles are cheaper just like in the SM book. Finally, it's worth noting that you can now take a locator beacon on a Drop Pod to help your now teleporting WG terminators or other pods find their target more accurately. 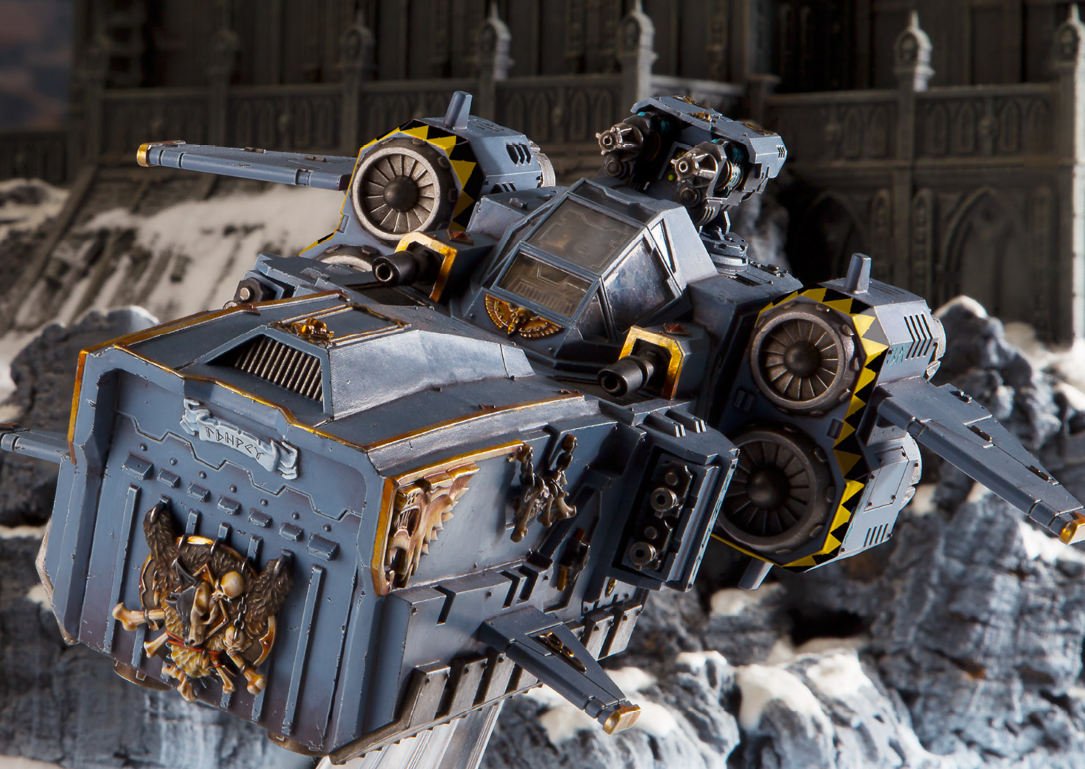 I've just finished building mine and I have to say I love it. There were a lot of detractors saying it looks like the bastard offspring of a stormtalon and caestus ram (and indeed the designers said as much in WD) but actually I think it's different enough to both and fits in well with the wolf aesthetic. There's a debate about fire arcs for the weaponry but with the angle it sits at I don't think it'll be much of a problem. I suppose if you were that worried you could have it skimming the ground as it's apparently meant to. Anyway, the big decision, as with any dual kit is which variant to build (unless you can be bothered to magnetise which didn't look easy to me). I'll talk about the comparison in the next post when I cover the Stormfang.

Let's talk about what you get for your points. It's just slightly more than a Stormraven for that you get a twin-linked helfrost cannon, twin-linked lascannon and two twin-linked heavy bolters. I'd pretty much always swap for the multi-meltas as having two anti-air melta shots too good an opportunity to pass up. Like a Stormraven you get PotMS and ceramite plating with AV12 all round. I know from bitter experience how difficult it can be to down a Stormraven sometimes so I know this thing will be pretty durable especially with the vehicle damage changes in 7th. That means your ridiculous amount of firepower will be around for a good while and with Hover you shouldn't be forced to leave the board in the late game.

Hover is essential of course as the Stormwolf has a whopping 16-man transport capacity and Assault Vehicle. That sounds awesome but you have to think about the total number of points you've got sitting in reserve. This isn't a problem with a Wolves Unleashed detachment though as, the way I read it at least, you can guarantee arrival on turn 2 thanks to Cunning of the Wolf. That single think makes putting something inside it viable to me. Too often I've played someone with a Stormraven who's basically had about 500pts stuck in reserve until T4 whilst I gleefully kill off the rest of his army that I'm effectively outnumbering.

It's worth thinking that if you don't choose to go with the Unleashed detachment and opt for Combined Arms instead you can give your Stormwolf Objective Secured for a late game objective steal. 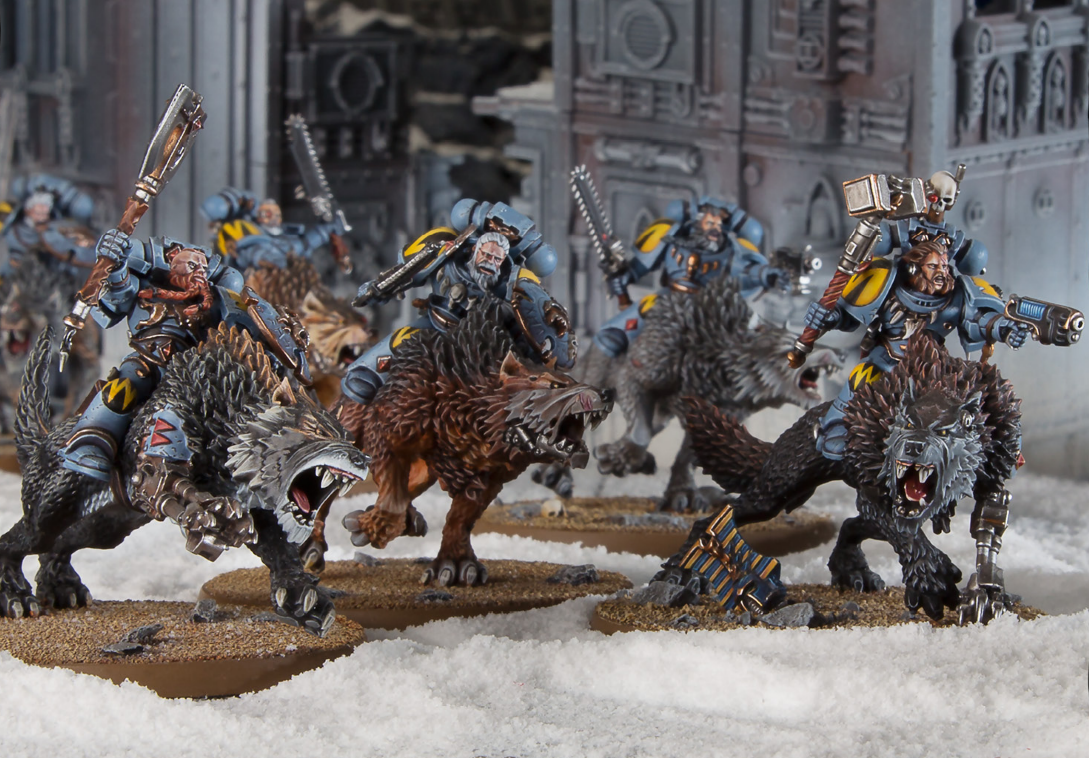 I was always a big fan of these guys in the old book but I'm well aware that a lot of die-hard SW players don't like them. They are pretty daft but so is a lot of stuff in this fictional universe so why the hell not? They're another unit that's seen a whopping price drop (20% in this case) and can now field a character. They have a minimum unit size of 3 now but a maximum size of 6 (presumably because you get 3 in a box). They still get a disgusting 6 attacks each on the charge and have increased to Ld 9 although they've lost their Wolfkin special rule.

The way you upgrade them has changed to allow for more than one model to take a special melee weapon and they can all still take melta bombs (if you really think it necessary). They benefit from the reduction in storm shield cost and you could not make them all TH/SS if you so desired. The crucial rules change though is that all of their attacks now have Rending regardless of whether they're using a special weapon or not. This may get FAQ'd but for now I think it's pretty clear. Rending is far from ridiculous and I seem to struggle to find the 6s anyway. It'd be great to give them a frost sword or wolf claw though for S6 AP3 Rending. Incidentally I've just noticed that Wolf Claws have changed to give +1S and Shred instead of the choice between re-roll to hit or to wound. That's awesome, my Wolf Lord with claw and shield is now S6! 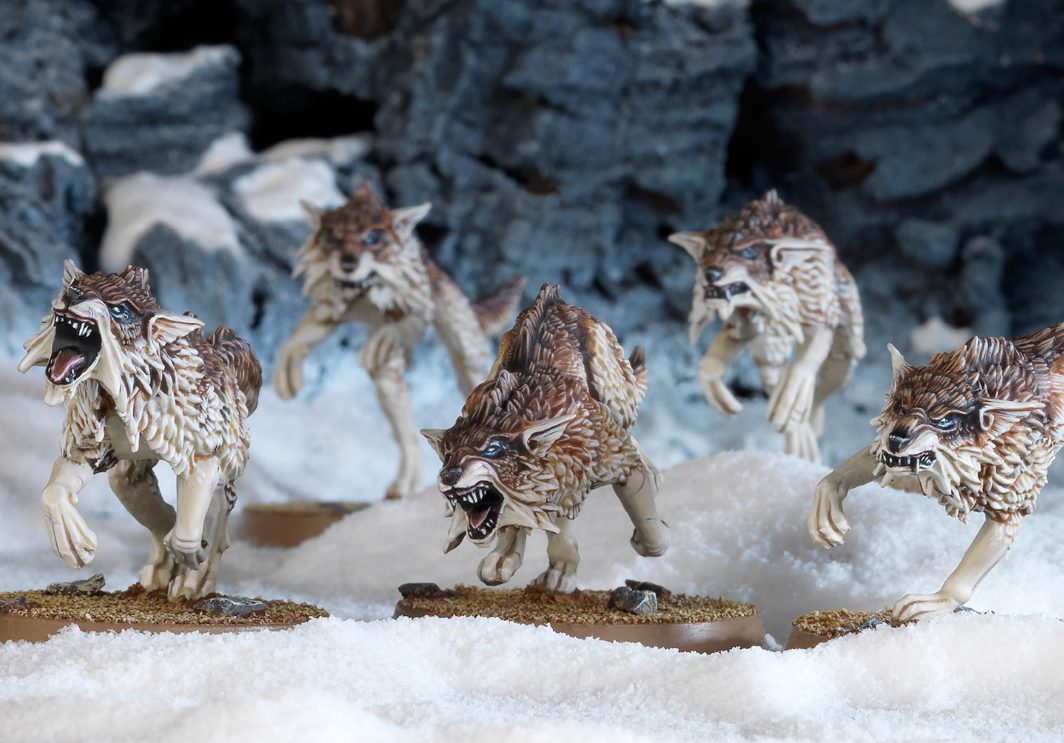 It used to be possible to great a fantastic themed list with Fen Wolves as Troops (thanks to Canis). This isn't an option anymore but the trade off is that they can now score. Apparently someone found a way to explain the "finer points of military strategy" to them. They make for a pretty cheap unit and with Harald they gain Furious Charge provided they're sufficiently close. That gives a 10-wolf unit 30 S5 attacks on the charge which isn't bad for 80pts! For some reason the cyberwolf is now more expensive by the way.

Ultimately they're competing for slots with TWC though so it'll be down to how many points there are to spare or how desperately you want to theme your list. With their poor leadership they need Harald around to stop them from running away as, not surprisingly, they don't get ATSKNF. 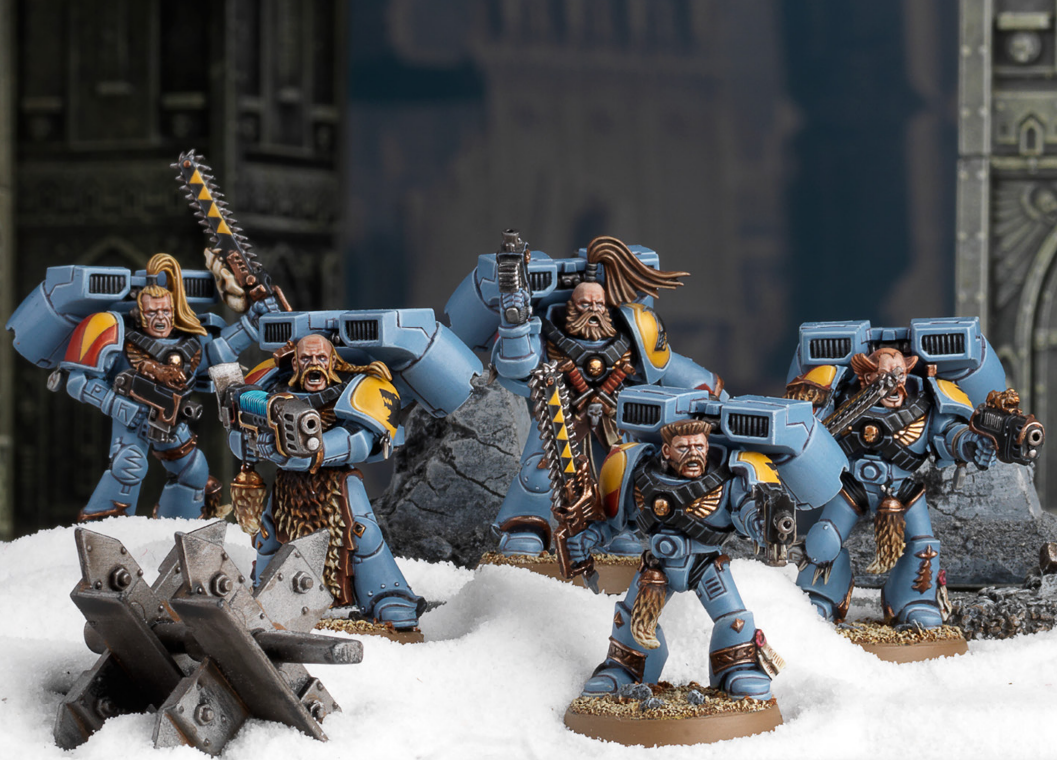 Yet another unit that got cheaper and like the other Blood Claw based entries they benefit from the loss of Headstrong and Berserk Charge. Like the Swiftclaws they can take a wolf guard with them for a lot cheaper than before and their one of the few units that doesn't suffer a points increase to their special weapons (they were already paying standard price before).

I'd love to use my Skyclaw models more often but I think it comes down to the fact that they're pretty comparable to Blood Angel assault troops. Their Rage isn't that dissimilar to Furious Charge. That means that first round of combat they can be great but they'll suffer badly when the attacks are directed at them. BA assault marines die easily enough and Skyclaws don't have the benefit of FNP and WS4. Counter Attack is obviously a bonus but they shouldn't be getting charged that often.

Still, for the points I don't think they're bad at all. If you want to steer clear of TWC for whatever reason then they offer you some great mobility to act as a distraction for the rest of your army. Don't expect miracles from them but they're cheap for what they're capable of. 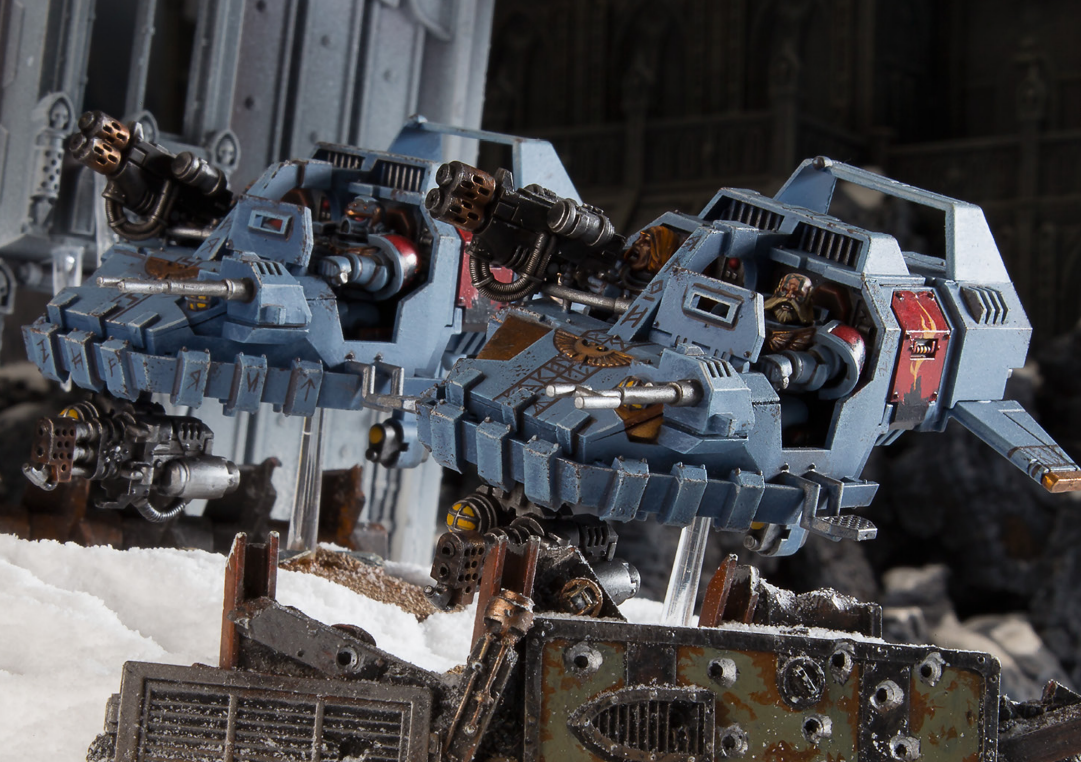 I used to nearly always throw a land speeder into my 5th edition lists for that deep striking multi-melta and late game contesting. In 6th that option was taken away with vehicles being prevented from contesting. With 7th that's a thing again plus you can actually score with them too so you might start seeing them creeping back into lists. They're pretty much identical to the old version too but Typhoon launchers and assault cannons have become significantly cheaper.

I think the old school multi-melta/heavy flamer is probably still the way to go and 70pts isn't much to pay for the potential to steal an objective at the end. Of course they're still AV10 and 2 HP so not the most durable but with Jink and the changes to vehicle damage they could still prove irritating to shift when your opponent stops ignoring them.

Conclusion
The Stormwolf and TWC are examples of classic GW sales strategy. Make the rules awesome on the new kit to shift some models and reduce the cost of an existing one to boost sales when you brought the thing out too late for most of us. Sadly it's going to work on most wolf players (myself included). I could easily see me wanting two stormwolves and some more TWC which will be a very popular with Harald I think.

I'm pleased to see Skyclaws and Swiftclaws being more viable but I think they'll be overshadowed by TWC in most people's eyes. It's a shame because they're characterful units which have a longer history with the army.

Two more posts to go in this series then so I should have it wrapped up in time for the GK book to come out. GW are really keeping me on my toes! Next time we'll look at the Heavy Support section before finishing off with a look at Logan and the various formations available in his book.
Posted by From The Fang at 17:00:00