I was pretty impressed with the generic HQs despite the fact that little has changed from before. The special characters were always going to be the crucial thing for me. I love using them and I'll be frustrated if they aren't at least viable. 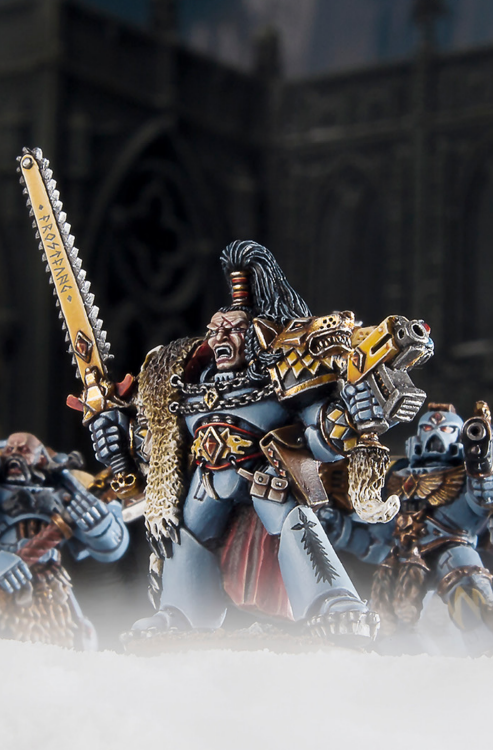 I loved Ragnar in the old book and in the BL fiction, indeed my Space Wolves are painted with his company colours. He made the unit he was with insanely good with extra attacks and Furious Charge. The trouble was that he lacked Eternal Warrior so I often found him dying against power fists on other characters. That meant he seemed too expensive at 240pts. He's now around 20% cheaper but he suffers some of the same problems and he's been toned down as a result.

His Incredible Reflexes used to give him a 4++ save which now comes from a Belt of Russ. Those reflexes let him re-roll an invulnerable save in the assault phase though which could go some way to saving him from power fists. Insane Bravado gave him and his unit +D3 attacks but now it forces him to issue and accept challenges. I'm generally not a fan of this and especially on a character without Eternal Warrior. He's basically committing suicide sometimes. Having said that a lot of the time he can kill the model with the power first before they strike. Also I'm not sure how it would work if you issued a challenge with another character in the unit. Could you do that to prevent Ragnar being able to? Bit of a rules-lawyer move but potentially doable.

Anyway, Ragnar's problem is that he's geared up for challenges with his special rules but actually tooled up for taking out squads of Space Marines. Of course the extra wounds spill out of a challenge now but he simply isn't as good as he was. War Howl only applies to his unit for example, whereas before it could affect a decent chunk of your army for a turn. I don't for a second think he's awful, rather I just don't think he can compete with some of the other options for the points. A reasonably tooled up thunderlord is better and offers a lot of the same bonuses without the drawbacks. In fact about the only thing you can't replace is his War Howl. 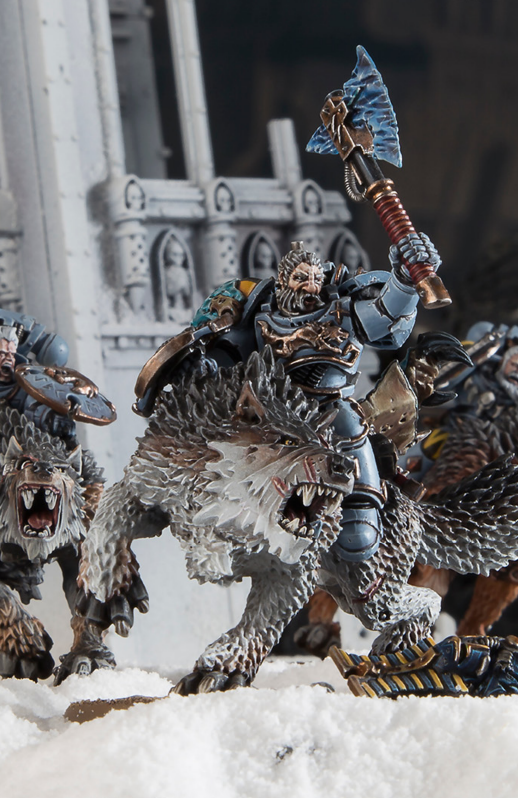 Harald Deathwolf
The rest of the internet would have us believe that Harald is the new best thing ever. He's pretty much the same in basic stats and equipment as a thunderlord and would come in at the same cost as a similarly equipped one. However, on top of this you get Outflank (automatically, unlike other units) and a leadership bubble for other TWC and fen wolves. His Mantle is nice but will very rarely be useful.

Basically if you're running a whole pile of TWC then it makes a lot of sense to take Harald which I suppose is fluffy if nothing else. He's great but mainly because you get stuff for free on top of a basic T-lord. The kicker is probably his warlord trait which gives Stubborn (great combined with his Ld bubble) and Furious Charge. I can see a lot of people taking him and I'll probably be buying the model but he just doesn't grab me like other characters do.

It's funny that the model has now been officially recognised as Harald. Clearly it was designed to be all along which makes you wonder if they were originally going to wait for a the new book to release him but were forced to bring him out sooner thanks to Chapterhouse.


Canis Wolfborn
Canis is essentially a WGBL on a wolf. Rampage is a nice bonus, if a little situational, but he's pretty pricey for something without an invulnerable save and only 3+ armour. The main reason to take him is for the Born of the Wolves special rule which when combined with Harald's Furious Charge makes for an incredibly potent melee unit. That can often be a problem though as something particularly deadly in combat can often find itself either avoided (difficult with TWC) or else killing stuff too easily and being out in the open to get shot. 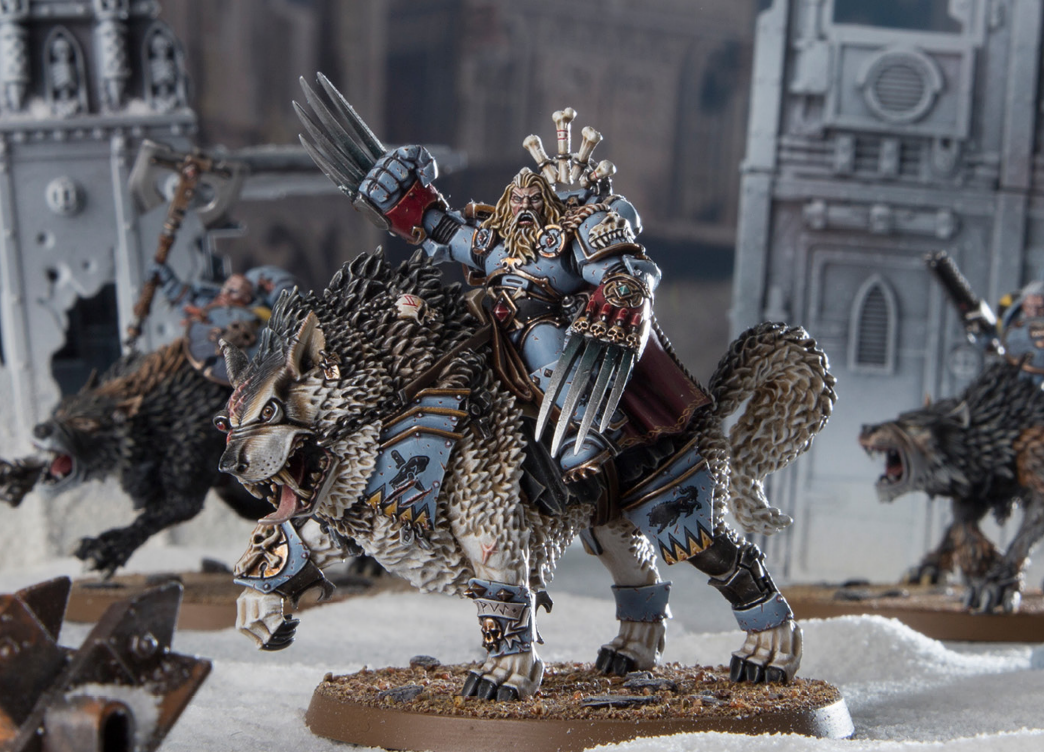 He's stayed exactly the same cost, lost the ability to make fen wolves troops (a must for a TWC only army - outside of unbound) and Lord of the Wolfkin has been given to Harald. It's a shame to lose Wrath of the Savage too and Rampage is a poor substitute most of the time.

Personally I think that in the case of Canis, the generic HQs offer more for your points. Again, he's best in a TWC themed list and again that's pretty fluffy if he's joining Harald. Finally, I think part of the issue I have with him is the fact that Fangir really doesn't blend in well with the rest of the new TWC models. I'll therefore be avoiding him on both rules and hobby grounds (although a conversion is always an option I suppose). 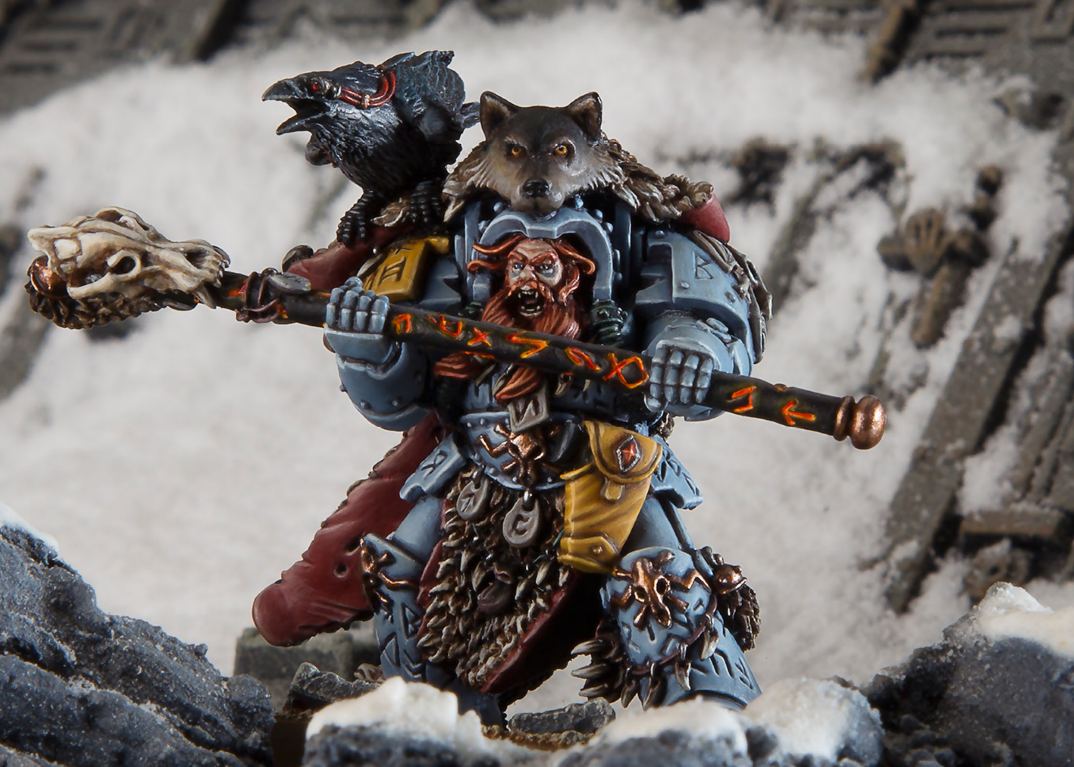 Just as before Njal has the issue of being about the same cost as two separate rune priests so he needs to justify that pricetag to compete for a slot. He comes with free psychic hood and free runic armour which can be upgraded to terminator armour for free (i.e. do this pretty much every time unless transport space is a premium). With ML3 and a re-roll you're nearly guaranteed Jaws (although I'm sure someone will do the maths can tell me I'm wrong) or at least you'll get it in most games. Having ML3 means he'll also be cancelling powers on his own unit on 3+ (6+ base then higher mastery, psyker and ad will). He can also re-roll a Deny the Witch attempt which is potentially game changing. Nightwing is now a ranged attack with more hits. Least it gives him some shooting outside the psychic phase.

Ultimately with the wargear and options he's got the pricetag is probably reasonable. It's a shame to lose Lord of Tempests and he no longer gets a 4++ save in his terminator armour. I'm likely to run him in the odd friendly game (since I've got the model collecting dust) but unless I'm missing something he won't see much competitive action.

It's worth thinking at this point about what having 6 HQs means for Space Wolves. You could easily fill those slots with ML2 rune priests and give yourself 12+D6 WC (or 13 with Njal). That could be pretty annoying for traditional psychic armies like GK, Eldar and Daemons and if you can swallow the fluff issues with Malefic Daemonology you could get yourself some Daemons (I don't think I'll ever bring myself to do this). Remember that Sanctic Daemonology is also an option if a little risky on Perils grounds. With Njal having 3 wounds now he's probably your man if you want to go down that route. 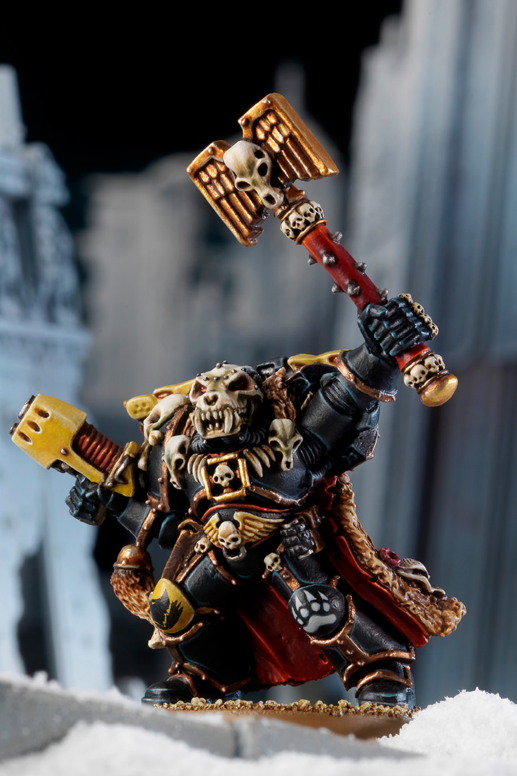 Ulrik was one of my dark horse favourites in the old book if for no other reason than he was just about the cheapest HQ special character. Like Njal he's found another wound down the back of the sofa and that's apparently made him cause Fear (which used to come from the Wolf Helm of Russ). His Helm now gives Stubborn although I can't see wolves losing many combats! Like the standard wolf priest he gets Healing Balms now and still comes with a 4++ save. He's lost his Mentor rule which is a little bit of fluff I'm sad to see go (although I always forgot the WS increase I'd given to another character!).

The main thing about him now though is having a 6" Preferred Enemy bubble. It's difficult to say whether this is an improvement over his old Oath as it's more universal but less reliable. Monster Hunter is a nod to the old Oath but he's got to be your Warlord to get it and I can't see many people choosing him when he's fairly easily insta-killed. He suffered with the changes to his weapon in the last edition more than anything else. He's going to score a decent number of wounds against most MCs but they'll save the majority.

Frankly for just 35pts more than the standard wolf priest (who I believe to be excellent), Ulrik offers quite a lot. His version of Preferred Enemy is better but you might wish you had runic armour some of the time. I can see him getting some use in competition but most will opt for generic HQs in preference. 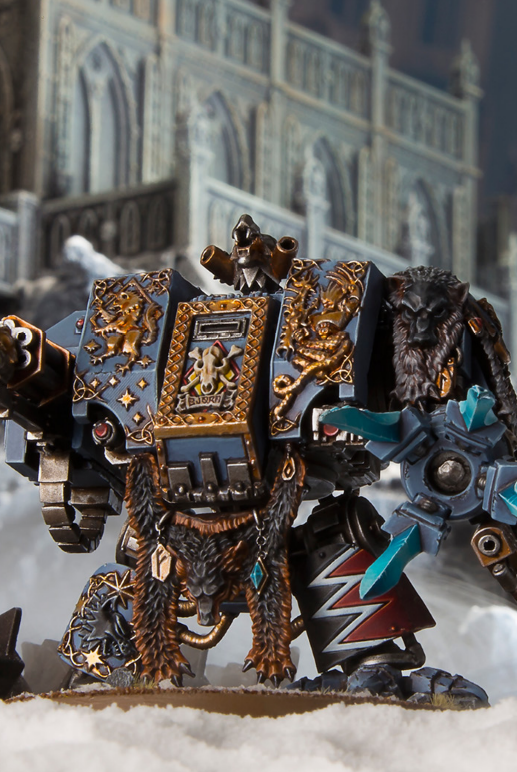 Bjorn is yet another special character that's taken a massive drop in points but he's actually become better for it. For starters his Ancient Tactician has become a bonus to Seize which is always handy. He's been helped a lot by 7th edition too as AV13 becomes pretty tough to shift again. He's vulnerable to meltas of course but few vehicles aren't. His claw is basically the same as the Great Wolf Claw but Master Crafted.

Just about the only thing he's lost is the Living Relic rule which isn't much of a hardship since, although it gave Fearless, the D3 victory points lost was a bit of an issue. The big change for Bjorn is his access to the Helfrost Cannon but more importantly a Drop Pod. This one thing makes him infinitely more viable. Before you struggled to get him into the thick of it but now you can drop him right into enemy lines and have some fun. The only problem here is Murderfang who's much cheaper and much more of a CC threat. However, with Bjorn, Murderfang and the new venerable dread you've got the potential for a dreadnought themed list which would be a lot of fun. There's a formation for him too in the Champions book but I'll get to that another time.

One final point is that he's a character now too. This means you can challenge out that Ork warboss and smash him before he uses his klaw or any other character equipped with an inititative 1 weapon. He'll be tricky to shift in combat too as AV13 means no krak grenades and even power fists might struggle when they need 6s to pen followed by Bjorn's 5++ save and venerable.  He certainly isn't cheap but I'm almost definitely going to pick up a couple of the dread kits and build me a Bjorn and Murderfang with the spare parts used to upgrade my old dread to a venerable. I love dreads so this is something to get excited about. I'll probably need some pods too, damn you GW!

Conclusion
I'll talk about Logan in a separate post when I cover his supplement too. Despite his cost I think Bjorn is the standout unit here. Not only is he powerful but he'll be a lot of fun and a bonus to Seize is a huge benefit to the army. Harald is pretty tempting too for what you get for your points. Ulrik is a great choice too.

Sadly I think Ragnar, Njal and Canis will lose out again. I'll be giving them a run out from time to time (well except Canis) but I'm not sure many others will bother. Still, I think things are pretty good here. There's some characterful choices with a lot of the fiddly rules taken away. Having 6 HQ slots in the Unleashed detachment doesn't have make me tempted to run all of the specials plus Logan at least once to see how much fun I can have. Probably won't have many spare points mind you!

Onto the core of the book next with the troops section which isn't the one-horse race it used to be.
Posted by From The Fang at 17:00:00