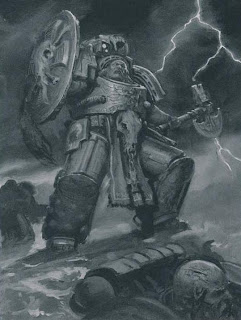 I briefly touched upon using Wolf Guard Terminators in my previous post about SW elite choices. I mentioned the power armoured versions of them in that post but I wanted to dedicate an entire article to equipping terminators for battle. The most important thing to consider is what you want from your wolf guard. Whilst they're pretty devastating in combat I think you need a balance of firepower and CC prowess to make them truly effective.

A bargain 33pts gets us a basic termie with power weapon and storm bolter. A basic squad of 5 of these will put out 10 S4 AP5 shots and 15 power weapon attacks on the charge. Not bad for 165pts eh? However, there's a ton of other options available to us so let's take a look.

Shooting Upgrades
In terms of shooting upgrades we've got the option of combi-weapons. Whilst flamers are great I think for most armies you're better taking a mixture of plasma and melta. Your going to be targetting your opponents most threatening units with your termies so leave flamers for units dedicated to general infantry bashing. Meltas are fantastic anti-tank weapons which will help your termies de-mech or weaken enemy units ready for a devastating power weapons charge. Plasma weapons are often overlooked because people worry about the Gets Hot! rule but with a 2+ save you've got a really slim chance of having problems. The benefits easily outweigh the risks in my mind. Once you've fired the single shot weapon you're still getting a boltgun plus you can still assault.

Every 5th terminator can sport a heavy weapon. The most popular choice by far is the cyclone missile launcher. This has a whole host of advantages such as firing two S8 shots per turn as well as being able to fire your storm bolter as well. Bear in mind that the entry for the launcher specifies "in addition to his storm bolter" which says to me that you can't give your cyclone termie a combi-weapon and still fire both. The assault cannon is often overlooked as a choice but it's rending ability can be nasty and wounding troops on 2+ and T6 MCs on 4+ with four shots is certainly worth considering. The other advantage is you get one in the box and don't have to resort to hefty eBay prices for cyclones. The heavy flamer falls into the same category as the combi-flamer in that it doesn't really fit with the role of the unit. Mind you it is pretty cheap at 5pts!

Close Combat Weapons
Now onto the important combat stuff. Our options here are wolf claw, frost weapon, power fist, chainfist and thunder hammer. Bear in mind that the only weapons that can give you an extra attack are a pair of wolf claws so the frost weapon is only of limited use. You're not really going to give them a pair of power fists after all!

Anyway, we've already discussed that power fists are cheaper than thunder hammers and despite them not being as cool I think they make a better choice. However, for 5 points more than a power fist (i.e. the same as a thunder hammer) you can have a chain fist. This weapon seems to get ignored quite a lot in favour of the appearance of a thunder hammer but the 2D6 armour penetration roll makes it vastly superior. Essentially it's like having melta bombs but used at your normal attacks characteristic!

So we'll ignore hammers and power fists (unless points are tight) in favour of chainfists. This leaves us with frost weapons and wolf claws. The clear winner for me is the wolf claw, being able to re-roll to hit OR wound is really handy and works out better than a frost weapon overall. I quite like them in pairs as 4 attacks that can re-roll is pretty nice and it's only 15pts for the pair. The downside is you lose your shooting but as I've discussed before it's not always advisable for a CC unit to shoot at it's combat target.

Other Upgrades
There are three upgrades I've not covered so I'll quickly mention them here. Mark of the Wulfen is a waste of time on terminators who already get 3 attacks on the charge all of which are power weapon (and for the same points you could have a chainfist). Melta bombs are similarly outclassed by power fists, hammers and especially chainfists. They're also pretty situational and don't really help against walkers since you need a 6 to hit with them.

The only "other upgrade" I'd bother with is the storm shield. At 30pts it's pretty costly but the survivability increase is worth it I reckon. People are going to target your terminators with low AP weaponry and a 3++ save can really put their nose out of joint. This also means you can throw a few power weapon attacks on that model minimising risky 5+ saves.

Suggested Line-ups
The first thing to consider before selecting a squad is how you're going to get them to where they're needed. Since we can't deep strike and they're too slow on foot we're limited by the transports. For example, if you're choosing a drop pod then ideally you'll have plenty of shooting and at least one storm shield. You'll also be limited to a 5-man squad. The land raider variants allow you slightly larger squads but the points really start to rack up. On that subject it's hard to squeeze terminators into lists below 1,750 without severely limiting your options. Anyway, here's some sample loadouts.

This unit works well in a drop pod army or as a single drop pod first turn strike in a regular army. At 265pts it's only slightly more than an empty land raider. The idea here is that you drop them in next to some IG tanks or SM devastators and let rip with your cyclone and combi-weapons. You then have to weather a torrent of fire which is where the shield comes in handy.

Your opponent has to devote at least some of his force to trying to deal with you before you get to assault next turn so you're buying time for the rest of your force to advance. A well placed drop pod shouldn't scatter far either.

Great distraction unit with a nasty amount of low AP fire and a hefty number of power weapon attacks.


Twice as expensive as the other unit but assuming your raider makes it to your opponent's line unscathed they're going to be lethal. The land raider's lascannons and the missile launcher (or AC if you prefer) will hopefully de-mech the target unit. We've got a squad here that still puts out some serious firepower (5 S8, 2 S7, 4 S4) while also remaining pretty nasty in assault too (12A at I4 and 3 at I1). You can still re-roll to hit OR wound with the claws and the storm shield gives you a bit more survivability. It's a viable choice for any 1,750pt+ army.

If points are tight then drop some of the claws. If you've got points to spare then throw in an extra combi-plasma & claw termie and switch out for a redeemer. Flamestorm cannons are lethal up close, can you say 2+ to kill marines? 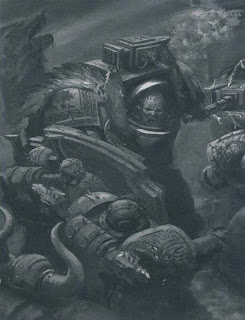 Granted you're never going to field this in anything less than 2500pt games (unless you're mad like me) but you should see it in action. It's most certainly a death star. There aren't many units that can even hope to deal with this in combat. The T-L assault cannons in combination with Arjac's hammer and two krak missiles should mean your opponent is well and truly de-meched (although I failed to do it last time I played since Arjac rolled a 1 to hit!).

Charge in and use Living Legend and High King to devastating effect. The former means you'll put out 32 power weapon attacks with the latter allowing you to re-roll to hit. With Logan/Arjac's necklaces and Preferred Enemy you'll get about 25 hits through from the squad. Did I mention the claws guys will be re-rolling to wound too? Without doing the maths I'd say that's going to result in about 20 kills (assuming you use Logan as a frost weapon). Bear in mind Arjac will be going last but that's still probably 15 kills before he even needs to strike.  In your opponent's turn you can make them fearless too!

Now obviously I'm not going to suggest this is a sensible unit to take in a competitive list but it isn't half funny to watch your opponents face when you repeatedly save on Logan and Arjac. I mean the claws in pairs are probably overkill and could be swapped for combi weapons but this unit is about looking cool not being sensible! What I tend to find is Arjac actually survives longer than Logan as he can't be targetted separately. Not that I'm complaining as who doesn't love 5 S10 hammer attacks on the charge??

Conclusions
Unless you're going for the often listed "Loganwing" army your terminators will probably be limited to a single unit. Their main role is to target your opponent's big expensive units and make a mess of them. Whenever you plonk a land raider on the table your opponent will probably throw everything he has into destroying it meaning the rest of your army is pretty much free to do as they please.

The important thing with any combat unit is the ability to de-mech. Combi-weapons, in conjunction with LR weaponry, are the order of the day and can be pretty nasty if your opponent's troops aren't lucky enough to be inside a metal coffin. Remember that you're only getting a single shot from each weapon though so use them wisely.

I'll try and post up about my combi-weapon conversions when I can. There's already some great guides out there though. Again I hope this has been helpful in helping you make your choices. I think the take home messages here are chainfists are good and storm shields add durability. Oh and that Logan and Arjac in a single unit is obscene!
Posted by From The Fang at 18:00:00