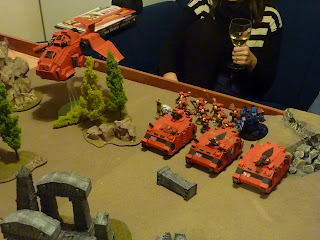 My fiancee introduced me to a new opponent in the form of Jamie. From chatting to him it seems like he's got a sickeningly large collection of figures, he's started a blog over here incidentally. Anyway, we fought a 2000pt battle last night which was total carnage that came right down to the wire. Our lists were as follows:

Each grey hunter pack was joined by wolf guard. Ragnar and the PW grey hunter pack went in the Land Raider. The rune priests joined the other GH packs in the rhinos. Arjac and his bodyguard would come in by drop pod and the land speeder was in reserve to deep strike.

The jump pack priest joined the 10-man assault squad and the other joined the 5 man squad. The death company, reclusiarch and their dreadnought were mounted up in the Stormraven and the whole army came on straight away.

Deployment
We rolled Annihilation and Pitched Battle, nice and simple for my first game against him. Jamie won the roll off and placed his Stormraven on his right flank. The three transports and Librarian were deployed in a close formation in the centre of his deployment zone. I placed my land raider on the right, the two rhinos on the left and the long fangs on a hill in the centre. I attempted to seize the initiative and scored a 5. 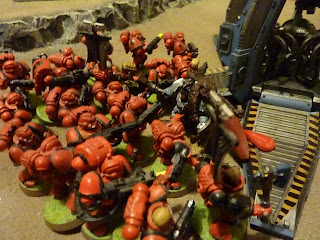 The storm raven advanced firing off it's plasma cannon at my nearest rhino, the shot missed so a volley of krak missiles was fired but with no effect. Elsewhere the transports and dread advanced, still tightly packed, towards my lines. The heavy bolter opened fire on my long fangs and unbelievably claimed two of them thanks to every shot getting through and 2/3 armour rolls being failed. The long fangs passed their morale check.

The drop pod came screaming down next to the huddled transports. Arjac tossed his hammer and the missile launcher added a couple of krak missiles which managed to immobilise one of the rhinos. I advanced my transports with the left-most rhino popping smoke and the second rhino advancing at combat speed so that I could try and get a lightning shot off. Sadly the librarian nullified the power with his psychic hood and no other weapons on the transport were in range. The land raider fired it's lascannons at the dread but could only stun it for a turn despite penetrating it's armour. 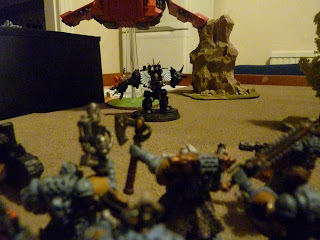 The death company dread disembarked from the storm raven and de-meched the nearby grey hunter pack with it's meltagun. Through a combination of careful placement of the hunters and Jamie forgetting to move the dread forward, it would not be in assault range. Both tactical squads disembarked from their rhinos and headed towards the terminators. Luckily, the small arms fire just pattered off the tactical dreadnought armour. The resulting charge claimed 4 terminators and wounded Arjac. When Arjac tried to strike back I managed to fail to hit with a single attack even on 3+. Arjac stayed in combat though. The jump pack assault squad used melta fire to destroy one of the lascannons and stun the land raider. Elsewhere the razorback's heavy bolters claimed another two long fangs, the shock of seeing his pack killed by what is normally an ineffective weapon terrified the remaining long fang who fled the battlefield!

The rune priest near the death company dread tried to unleash a burst of lightning but this was again nullified by the hood of the librarian. The rest of the squad were more successful as melta fire left only a smoldering crater where the DC dread had been. This did however, leave the grey hunters badly exposed, especially considering there was a stormraven full of death company hovering ominously above them. The land raider doors swung open and Ragnar and his pack ran out guns blazing. They charged into combat with the jump pack assault marines but, to my frustration, didn't benefit from Ragnar's insane bravado. Ragnar killed off the priest but the second one was nearby so the squad could still claim FNP, never-the-less the rest of the squad killed all but two of the assault marines for minimal casualties. Elsewhere the tactical squads failed to take the remaining wound from Arjac who this time lashed out with his hammer killing several tactical marines. The squad with red thirst took additional casualties but the other squad fled the combat. 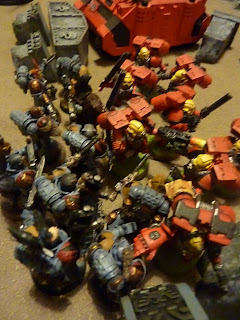 Turn 3
With Arjac and the drop in close proximity the tactical squad ran straight off the board. Sadly the remaining squad just managed to finish off Arjac this time. The death company disembarked from the stormraven and a combination of relentless bolter fire, plasma cannon and power weapon attacks left only the Wulfen model alive. Luckily he broke free of the combat which meant the dead company would be forced to chase him off the board over the crater left by his rhino. The melee in the centre of the field became carnage as the librarian dread and 5 man assault squad waded in. The dread instantly killed off Ragnar who was unable to score a single wound on the remaining two jump-packers. Effective use of the wolf standard meant that the grey hunters were only reduced to 4 men who fled the combat. The librarian retreated to a safe distance, the assault squad stayed close to their transport and the remaining two meltagun jump packers closed in on the land raider. 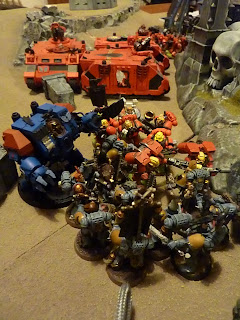 The land raider saw the threat and fired off it's remaining weapons to try and remove the threat of the assault marines. Cover saves and FNP meant this was ineffective and therefore the remaining Rune Priest unleashed a murderous hurricane which claimed one of the marines. The land speeder descended from the skies and, despite scattering, it was able to blow up the librarian dread. The grey hunters regrouped and charged straight back into combat with the assault squad but despite killing the priest they perish.

Turn 4
The remaining tactical squad responded to the loss of the furioso dread and in combination with the heavy bolter they managed to stun the landspeeder and destroy it's multi-melta. The death company fired at the wulfen grey hunter and took his life. The storm raven immobilised the remaining rhino and destroyed it's storm bolter. Mercifully the meltagun marine misses his (massive) target.

The land raider moves so that the assault marine won't get a cover save from the lascannon which it fires to deadly effect. The grey hunters and RP disembark separately from their stricken rhino. The grey hunters charge into the assault marines and bring them down for minimal losses but only get a single inch to consolidate. The rune priest moves to get cast a murderous hurricane in the direction of the death company which he manages now that there are no psychic hoods to spoil his fun. Unfortunately not a single DC falls but the dangerous terrain may claim some soon as they'll be forced to move by their rage special rule. 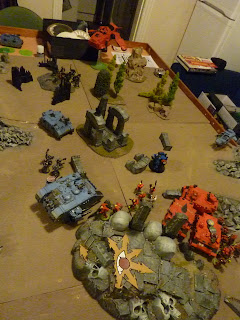 Turn 5
The death company are forced to advance towards the stricken rhino but sadly on a single model falls to the dangerous terrain (reclusiarch takes a wound). To avoid pushing his luck Jamie elects to shoot at the rune priest rather than trying a potentially costly run. The shooting is ineffective but luckily for him the krak missiles from the stormraven finish the job. The tactical squad charge into combat with the grey hunters but their charge is ineffective thanks to the Wolf Standard and they suffer several losses.

The land speeder gets to safety and the land raider tries to take down some of the transports but can only shake a rhino and immobilise the razorback. The grey hunters remain locked in combat but numbers on both sides are thinning fast as we find out we'll get a 6th turn.

Turn 6
The death company shoot into the rear of the rhino and finish it off. The grey hunters are finally triumphant against the tactical squad but only the wulfen and wolf guard remain. The mobile rhino moves away to try and get a cover save from the inevitable lascannon fire. 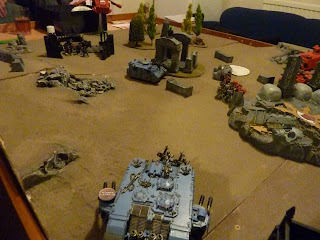 After a quick totting up of KPs I know I've got to kill some transports to claim victory. I line my landspeeder up behind the razorback to try a flukey heavy flamer shot. The land raider positions itself so the rhino won't get a save and the grey hunters get ready to charge the immobilised rhino. With 3 KPs up for grabs I'll need one for the draw and 2 for the win. The landspeeder fails to penetrate the armour. The land raider can only stun the rhino. So it's down to the wolf guard's power fist to seal a draw. Since he's autohitting at S8 the rhino explodes claiming the wulfen. The game ends here.

Conclusion
That heavy bolter made mincemeat of my long fangs thanks to some awful armour rolls (I need to get better at power armour saves). This meant that their target, that stormraven, managed to cause havoc until the final turn. Arjac and his squad were unlucky with their armour saves as the four terminators all failed 2+ saves! He proved his worth though even if it took a little luck. An eternal warrior with 2+/3+ saves is hard to shift.

My use of murderous hurricane might have seemed ineffective but the fact that the DC didn't advance any further probably saved some of my other units.

There were the odd couple of things that really didn't go my way. Both our damage table rolls were poor except for the rhino for Jamie and the Librarian for me. Had those transports gone down earlier (like when Arjac used his hammer) then the land raider could've been taking potshots at the stormraven.

So what are my impressions of the stormraven? Well I have to say I think it's awesome. Despite what others might think I love the model and I think it fits in with a space marine army well. I'm slightly gutted I can't field one for Space Wolves but to be honest it wouldn't be quite as effective since dreads and jump packs aren't so readily available. Jamie admitted he was a bit too cautious with it but that's because he was concerned about meltaguns (until he remembered they aren't as effective against it. It puts out a sickening amount of fire though and we only realised at the end that Jamie had forgotten to fire off a single Bloodstrike missile so god knows what would've happened if he had!
Posted by From The Fang at 18:00:00