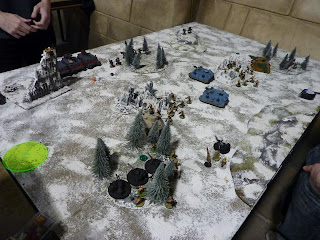 Matt and I travelled down to Warhammer World on Saturday to have a few warmup games before the big 40K doubles event there in a couple of weeks. We'd invited along the C&F guys as our sparring partners and while we were waiting for them we had a quick 1500pt game of Matt's BA vs my Eldar. Unsurprisingly, I got pasted but this was perhaps due to me having forgotten pretty much everything about Eldar. There were a couple of instances where I got the order wrong. For example, my farseer successfully killed a Sanguinary Priest with Mind War but not until I'd already had an unsuccessful Bladestorm from a full squad of Dire Avengers. With the priest alive Matt passed an ungodly 4/5 FNP rolls which, after the priest's death, would've all been dead marines!
Towards the end of the game Gav and Darren arrived and we set about our warm-up game. They fielded a combined Chaos Daemons and CSM list. I've never actually played against Daemons before because none of our little gaming group has them. Since the actual models they were going to use in the doubles were away for painting it was predominantly a counts as army with a variety of WHFB, Tyranid and Ork models standing in for Daemons. The CSM models were present apart from obliterators but SM terminators sufficed. There's been some debate about "counts as" armies recently and I have to say that I don't really have a problem with them. However, with a daemons army it's nice to be able to look across and see what's yet to come in from reserve. Mind you I wouldn't know what they were even if they were the correct models anyway!!
Space Wolves & BA vs Chaos Daemons and CSM 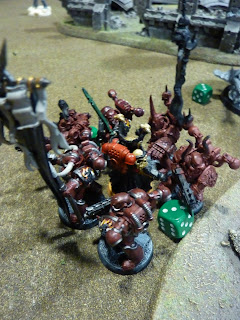 We rolled Dawn of War and Annihilation as our game type. I'm not a huge fan of Dawn of War because I feel it slows the game down a little and encourages people to place too much of their army in reserve. Anyway, we deployed a rhino with grey hunters and a rune priest inside it. This was positioned as close to the centre of the board as terrain would allow because we knew we'd be relying on Jaws to try and take down the Great Unclean One. We reserved a land speeder but everything else would come on in turn one.
Our opponents deployed a Daemon Prince (lash of course) behind a rhino full of CSM. We brought our long fangs on into some pretty awkward cover behind some trees. Basically we'd rely on them being able to split fire because two missiles could see left but not right and vice versa. Mephiston and his BA cronies came on to our right and the remaining rhino cruised onto the board and popped smoke. The Rune Priest's rhino moved forward and he attempted to get off Living Lighting. I managed to roll a double 1 causing him to lose a wound and then another 1 for the number of shots which meant we could only stun the rhino. This at least prevented the lascannon marine inside from firing but we'd have rather destroyed it of course.
With some shocking dice work by Gav the daemons didn't get their preferred force so two units of plague bearers deployed right near their board edge and a unit of hounds deployed near the centre. All three units scattered! The obliterators walked on from their table edge and popped a couple of plasma cannon shots off towards the Blood Angels but I think only a single marine fell. The rhino and daemon prince advanced but the rune priest nullified the daemon's attempt to use lash on the BA. The chosen marines powered down our right flank.

The long fangs managed to blow up the CSM rhino and kill a couple of marines in the process. The CSM were then charged by Mephiston but Matt rolled three 1s when trying to wound. This meant that although Mephiston won the combat he was left with a single remaining wound thanks to the power fist. The obliterators fired at him but couldn't get past the handy cover granted to him by the rhino wreckage. Mephiston returned the favour by killing one of the obliterators and a single long fang missile was enough to instant kill the other thanks to a failed armour roll.

The Great Unclean One came on near the chosen rhino and luckily for him a Jaws attack from the rune priest failed to hit him. Unable to get into combat straight away he waited near the rhino hoping that the BA assault marines would get closer. The Daemon Prince charged into the assault marines but the sheer weight of attacks were enough to bring him down but only after heavy casualties from the BA. The chosen marines waded in to avenge the prince but despite claiming a few marines they too were cut down. Things went from bad to worse for our opponent as a second Jaws attack was more successful causing the Great Unclean One to fall down a hole.

Elsewhere my grey hunters had powered up the left to try and finish off the hounds which had immobilised the land speeder after it came in by deep strike and rather unsuccesfully flamed them. There were 4 hounds left after a torrent of fire from the grey hunters and long fangs. Gav's flamers came on and killed 8 of the grey hunters apart from the standard and the wulfen. These two remaining grey hunters went on to kill off all the flamers and the remaining hounds.

The other grey hunters were charged by Gav's Fiends but a very successful counter-attack under a wolf standard meant that the fiends were wiped out with minimal casualties. At this point with only the plaguebearers (minus a couple of models) left our opponents decided to throw in the towel.

It genuinely felt like we weren't going to win this one but mainly because Darren seemed pretty clued up and because we had no idea what to do against daemons. Just goes to show you how hardy Grey Hunters can be. I'm pleased I've now got standards for my packs.

Space Wolves & Guard vs Space Wolves
Finally, after some Fat Bloke burgers, Matt and I teamed up again to play Gav and 1500pts of his Space Wolves. I fielded my Wolves and Matt put together 750pts of guard with a couple of Leman Russes (appropriate when fighting with Space Wolves), a lot of guardsmen and a few heavy weapons. 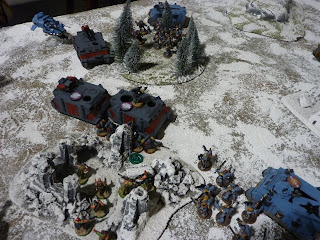 We played Seize Ground with Pitched Battle deployment. There were three objectives with two on our left and one to our right. Gav fielded 4 razorbacks with 5 grey hunters in each, a rune priest, rifleman dread, 2 squads of ML long fangs, some scouts and two land speeders.

The fight felt pretty one sided early on. We took out most of one of the long fang packs, the rifleman dread and a land speeder (thanks to a deep strike mishap) and felt like we were going to walk it. However, our opponent seemed unphased by the losses and we began to see why when grey hunters started advancing in their razorbacks. My hunters dealt with the full strength long fang squad whilst my long fangs finished off the remaining members of Gav's depleted pack. Although the razorbacks took quite a lot of hammer the grey hunters inside managed to clear the guard from the centre objective whilst his scouts came on near the left hand objective and got stuck into the heavy weapons team and guardsmen that were controlling it.

Thats the problem with guard armies. You feel pretty good when you get some juicy kills early on but if your opponent makes it to your lines then your men fold like a deckchair. The game was suddenly a lot closer with both left hand objectives being contested and the right hand objective being held by guardsmen.

Sadly at this exciting point in the game Gav said he had to leave as his missus was nagging so we were forced to end it after Turn 4. We could debate all day how it would end but obviously we felt that we still had the upper hand.

All in all a very enjoyable day at Warhammer World and good to get us back into 40K after a few excursions into Blood Bowl etc. Speaking of which I've now got an Orc team which I'm going to try and paint up after my TWC. We still feel pretty good about our list for the doubles but we'll have to wait and see who we get drawn against! Only just over a week to go and I've got to get my land speeder finished by then!
Posted by From The Fang at 19:19:00