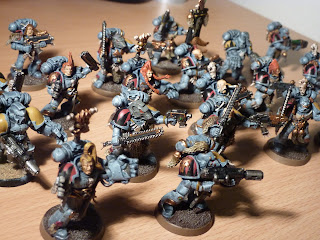 Without doubt the most important units in any Space Wolves force are its grey hunters. Whenever I'm writing a list I base it around a solid core of grey hunters and everything else is basically going to support them in their role at taking and holding objectives. Obviously, our other option, the Blood Claws, have their merits but really the ability to have a standard weapon and still have two close combat weapons along with WS/BS 4 instead of 3 is always going to make the Greys win out. The other crucial difference is in their wargear selections. Let's discuss these and then talk about typical load outs for grey hunter packs.

Weaponry
Straight out of the box our Grey Hunters come equipped with a bolt pistol, chainsword, bolter, frag and krak grenades along with the ever-reliable power armour. We also get acutes senses (only useful in the first turn of Dawn of War), Counter-Attack (always nice) and the ubiquitous ATSKNF. 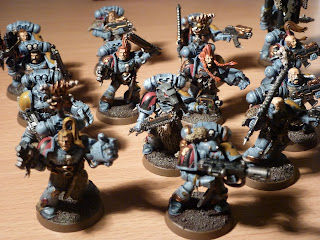 One grey hunter can have a special weapon and in a 10 man squad we get another of these for free. The options are flamer, meltagun and plasma gun. Most people would go for the meltagun and I'm no different but here's my reasoning so you can make your own mind up. Grey Hunters are an assault unit which means that anything that might prevent them from getting the charge isn't ideal. Now counter-attack goes a long way to mitigating a failed attempt to get the charge but as I've already talked about it's important to deny our enemy the chance to charge. Since the plasma gun is a rapid fire weapon by firing it we're committing ourselves to shooting and not charging. If we're in rapid fire range then we're also in charge range of our enemy so you better believe they're going to come at you next turn. Therefore we really want an assault weapon, both the flamer and meltagun can be fired without giving up our charge but I wouldn't normally take a flamer because in some ways it's too effective. If we score a lot of kills our opponent will probably remove models at the front which means we might not get to charge. Personally I think it's a toss up between melta and flamer but what sways me is that our army doesn't really have anything to deal with AV14 without it.

I'd never bother with the plasma pistol because I think it's too expensive. The power fist is debatable but I'll get to that later. If I had Ragnar leading my squad then I'd take a power weapon for it since up to 5 extra S5 I5 power attacks are nice! 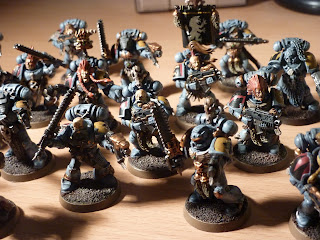 On top of the weaponry we can also give our grey hunters a Wolf Standard and one model can succumb to the Mark of the Wulfen. The Wolf Standard doesn't seem that great at first, or at least it didn't the first time I read it, because it only lasts for a single assault phase. However, think about what it means, for one assault phase you can re-roll any 1s you get for hits, wounds, armour saves, initiative for sweeping advance and also the number of attacks the Wulfen model gets! The armour saves alone are more than worth it. It might not be quite as effective as FNP but you'd be surprised how invincible it makes your Greys seem for that combat phase. The key to using it is to choose your moment. For starters you have to declare you're going to use it in the preceeding Shooting Phase (be it in your turn or theirs) and sometimes your opponent may decide not to charge you to ensure that you waste it!
Mark of the Wulfen is pretty awesome too. For only 15 points you get upto 8 attacks for one of your Grey Hunters and what's more these attacks are rending too! Obviously luck has a lot to do with it but you're nearly always going to get more attacks than the standard model.

Both of these upgrades are, in my opinion, a no brainer. The other no brainer is that your greys need transport. Your choices are Drop Pod, Rhino or Razorback. I think the drop pod is nice for a surprise bit of in your face action but otherwise I'd stick to the dependable (and cheap) rhino. Whilst razorbacks add to your long range firepower I'm really not a fan of the multiple small units tactic as I think 5/6 man grey hunter squads are too easy to take out. 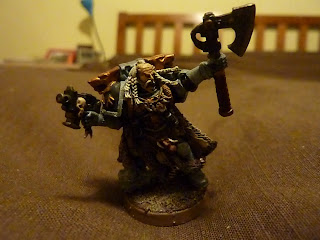 Squad Leaders
Independent characters aside it's always good to throw a Wolf Guard in as a squad leader. For 43 points you can get a combi-melta and power fist in your grey hunter squad. He'll also benefit from any special rules granted by characters that join the squad. A Wolf Guard with these weapons is only 3 points more than a grey hunter with a power fist which is why I said it's questionable giving a fist to a grey hunter. The Wolf Guard also gets 3 attacks with it on the charge which makes it far superior. The combi-melta shot can be crucial in helping you de-mech a unit. In addition the Wolf Guard increases the leadership of the squad to 9. Don't forget you're using an elite slot for them though.

Our other options are Rune Priest, Wolf Priest or special character. When using a Rune Priest the grey hunters essentially just act as a bodyguard for him but his extra power weapon attacks are handy. The Wolf Priest is a nice choice as Preferred Enemy and Fearless make your hunters even more deadly.
Ragnar is an excellent choice for grey hunters. Although he's pretty pricey he gives the squad Furious Charge and D3 bonus attacks when launching an assault. Sadly the most recent FAQ made him a little less amazing but I still think he's worth his points. Try assaulting a normal unit of marines and see how long they last when you throw a ludicrous number of I5 S5 attacks their way. In this case I'd be tempted to take a land raider as transport to make sure you get that devastating charge.


The Typical Pack
My standard equipment for Grey Hunters (after trying quite a few permutations) is as follows: 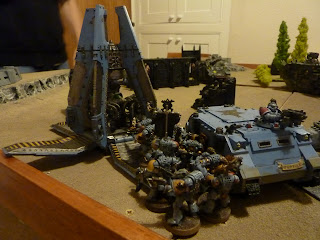 I personally think that's a bargain. It's easy to field several of these squads even in low points games and they'll prove their effectiveness time and time again. The reasons for having 8 grey hunters are simple. Firstly because with the wolf guard you make a 9-man squad which for morale checks will have to lose 3 models instead of just 2 and also because then if we want a character to lead our squad we can still fit the whole thing in a rhino.

Alternatively, if you can't spare the elite slot then I'd go for:

Slightly more expensive and not as effective. The flamer will help you deal with hordes or entrenched guardsmen/eldar though and 10 grey hunters is nothing to scoff at! If you wanted you could have two meltaguns but this pushes it up to 240pts.

As with everything on this blog I encourage you to try things for yourself rather than just taking my word for it. The wolf guard can be easily created using the Wolf Pack kit and a bit of conversion work for the combi-meltas. Speaking of which I'll do a post soon showing my attempts at this. I'll also finally get round to showing you how I paint my grey hunters (although you're almost certainly a better painter than me!).
Posted by From The Fang at 18:00:00