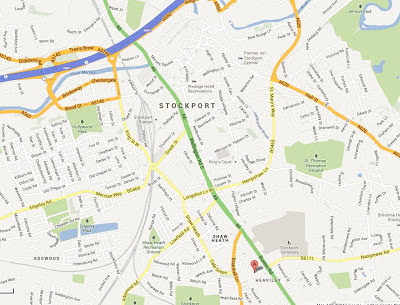 Click on the map to make it larger. If anyone has questions about getting to the venue then don't hesitate to contact me and I'll help as best I can. The venue is pretty close to Stockport Railway Station so it's worth considering that as an option. There's also a Premier Inn across the road for those who want to stay over the night before/after.

There will be awards for: 1st, 2nd & 3rd place, Last place, Best Painted Army and Best Painted SC. These will take the form of store credit and the venue offers 15% off GW. There will also be a series of spot prizes throughout the day and a raffle at the end. The prize breakdown is as follows:

The raffle and spot prize pot is based on the number of players. The more tickets that are sold, the bigger the prize pot!

Refereeing
As I would like to participate and given that it's intended to be a friendly tournament, there will be no formal referees. If you and your opponent cannot come to an agreement about a particular issue then please ask the players on adjacent tables. If no mutually acceptable resolution can be found then myself or Matt will be happy to provide a final adjudication but please bear in mind we're trying to enjoy the event as well.

Army Selection
Each army can cost up to and including 1,850pts. Standard force organisation charts apply but each army MUST include a Special Character (not necessarily as an HQ though). Lists must be submitted at least two weeks before the event (October 19th) failure to do so will result in a points penalty.

The allowed Special Characters for each army are listed here. If you believe there is an error regarding your army's choice of characters then please contact me. These characters must be in your Primary Detachment but do not necessarily have to be your Warlord .

Any current army with a codex that's been released prior to the list submission deadline will be allowed and all current GW FAQs will be applicable.

The following codexes are permitted:

IA units or indeed entire IA armies are not permitted. I've previously allowed them but I've found it opens up too many options for abuse. Generally I think it penalises players who aren't familiar with the IA books and therefore the units they describe. It also penalises people who don't want to fork out for FW models in an already expensive hobby.

Ideally armies would be fully painted and there will be a Best Painted award to highlight particularly stunning efforts. However, I understand how much time and effort this takes so a three colour minimum with appropriate basing is compulsory. Unpainted models are not acceptable.

Flyers, Fortifications and Allies are all permitted. All of which must also be painted to a minimum of three colours.

Alternating scenery deployment (as described in the rulebook) will NOT be used to save setup time. Fortifications will therefore be placed after static scenery but can displace existing pieces to make room for larger pieces at both players discretion.

Scenarios & Scoring
The scenarios will be as follows but are altered from their standard rulebook versions (see below), these are subject to playtesting and may alter slightly:

Purge The Alien
The points value of each unit you've destroyed from your opponent's army is added up in a similar way to 5th edition style VPs. Destroying the single chosen special character will gain you 150 bonus points. This gives a maximum of 2,000pts (1,850 for the army plus 150 bonus for the SC). The totals will then be converted into a score out of 25. Tabling your opponent does, of course, give you maximum points. If your opponent generates extra units (e.g. spawned termagants or daemons from a portalglyph) they are worth their standard unit cost. This could potentially mean it is possible to score more than 25 VPs.

The Emperor's Relic
A combination of Relic and Emperor's Will. One central fixed objective (cannot be moved like in the Relic though) worth 10 VPs. Each player has one objective each placed in their deployment zone. If you hold your own objective at the end of the game you score 5 VPs. If you hold your opponent's objective you score 10 VPs. A single chosen special character will count as scoring. Tabling your opponent DOES NOT automatically give you maximum points.

Crusade
Automatic 5 objectives worth 5 VPs each. A single chosen special character will count as scoring. Tabling your opponent DOES NOT automatically give you maximum points.

There will therefore be a maximum of 25 VPs available in each round. The standard secondary objectives (Slay the Warlord, First Blood and Linebreaker) will be in effect in all three rounds and VPs scored from them will be recorded, but will not contribute directly to the VP total.

As indicated in the Special Characters document, characters who can't leave their vehicle override "the vehicles can't score/deny" rule. This includes scoring Linebreaker.