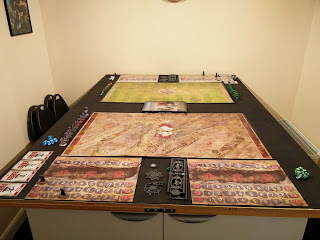 We've been meaning to get a four player Blood Bowl league started for years. We'd tried to run a league in the past but whilst Matt and I were interested, the other two just weren't feeling the love. The new boxed set at the end of last year was a great excuse to kick start the search for a couple more players. We found them in the form of Steve (from my work) and Kern (a friend of Matt's). Neither of them own any BB stuff themselves so Steve would take my Humans and Kern would use my Orcs. Hopefully if they stay interested they'll fancy picking up one of the new teams that will have hopefully been released by then.

Anyway, that left us with our four teams (3 re-rolls each): 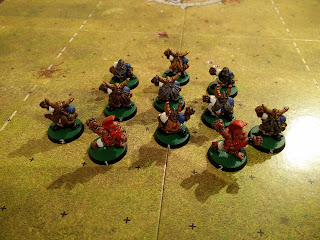 No prizes for guessing where the league name comes from! Anyway, Steve and Kern have barely played a turn of BB between them so we started out with a half game as a warmup. I played Kern's orcs and got to feel what it's like facing four black orcs! One of my runners did have a pop at one of them though and managed to injure him!

Game One - Dwarves vs. Humans
We then kicked into the league proper. We randomly determined the pairings for the first game and I was up against Steve and his Humans. After the warmup game we'd had some debate about whether the ogre was a better option than a couple of catchers but Steve decided to stick with what he'd got and maybe pick up some catchers later on. 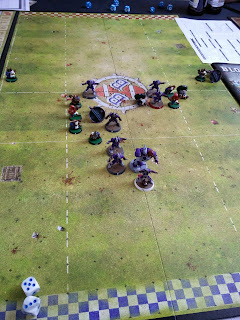 Steve won the coin flip and decided to receive first (after I explained it probably wasn't a good idea to kick to Dwarves). The early play involved a lot of smashing at the line of scrimmage but Steve left the ball in his own endzone where it had ended up after the kick. I tried my best to get a runner through to it but he spotted the threat and stopped him in his tracks. When he eventually did go for the ball he smashed through the middle of the field with his ogre at the front of the cage and came within a turn of a touchdown. Fortunately I was able to get a runner through to him and stop him in his tracks. A few turns later and this was the scene: 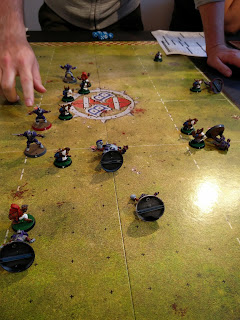 I'd managed to drag the ball out to my right wing and set up a partial cage to give Skag (one of my runners) a pretty much unmolested run down the wing and into the endzone for a touchdown. That pretty much wrapped up the first half but I'd be receiving to start the second half. By this point Steve had a handful of guys knocked out (though frustratingly none injured) and only two of them woke up for the start of the second half. This gave me a slight numbers advantage which I managed to exploit to give Skag another touchdown that pretty much sealed up the game.

A standard skill upgrade meant Skag would have the Block skill for the next game. I also added an apothecary to try to prevent any brutal early player losses.

On the other end of the table, the Orcs had taken a brutal defeat to the Skaven. When I'd looked over in the first half it was 1-1 but by the end the Skaven romped to a 4-1 victory with an orc thrower dying in the process. Needless to say, the Orcs didn't take too kindly to the embarrassment... 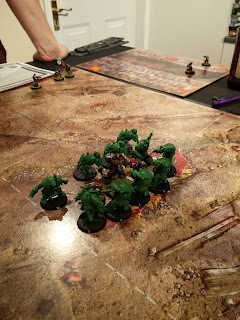 Sadly, all of the rats survived with just one who'd miss the next game...

Game Two - Dwarves vs. Skaven
We randomised it again which meant I would face Matt for my second game. There's no love lost between us so we decided to use Illegal Procedure for this game (although agreed not to bother for the rest of the league). Apologies in advance for not taking any pictures but I wanted to concentrate on the game as much as possible.

Matt won the flip and obviously elected to receive. With pretty much the opening block of the game he broke Yadri's (one of my troll slayers) leg and put him out for the rest of this game and all of the next. That evened the numbers up briefly but it wasn't long before he failed a block with his rat ogre who was promptly knocked out. He did, however, manage to get within spitting distance of my endzone with the ball in the hands of one of his gutter runners. Fortunately I managed to stop him just short and was able to get the ball to good old Skag who legged it over to his favoured right flank and headed for the endzone. I decided not to rush and make sure I smashed up the rats as much as possible before scoring. I even took the gamble of handing off the ball to Kragg (my other runner) so he'd get the SPP for the touchdown. Probably silly given that this was turn 7 but hopefully worth it down the line. I felt pretty good with a 1-0 lead going to the half.

The second half didn't start well for Matt either. He rolled throw a rock on the kick off table and I won the roll off (neither of us had FAME modifiers). The rock must've been a big 'un because it hit one of his blitzers in the skull and put him down permanently. I wasn't complaining but it's a shame it didn't happen at the hands of one of my dwarves! In fact, the game had been pretty frustrating on that front. I seemed to be getting through the rats' armour with no difficulty but I think I only caused a single injury (another fractured leg). Of course stunning and the odd knock out helped but long term it wouldn't hamper Matt as much as I'd like to.

The turning point of the game was another instance of Matt having a gutter runner near my endzone with the ball. My runners were playing some deep defence and managed to snatch the ball away. I was pretty sure he'd be able to recover it again next turn as I had no back up from the other much slower dwarves on the line of scrimmage. I therefore decided to try to pass down the left wing to one of my blitzers. If nothing else I thought I'd get the ball out of my half and give myself a bit of breathing room. That was until Kragg fumbled the pass and Matt's gutter runner gleefully scooped up the ball for an equalising touchdown.

Unbelievably Matt rolled another rock to be thrown and I again won the roll off but with just a stun this time. That coupled with a couple of knock outs meant the numbers were in my favour. Unfortunately the dice weren't. Matt managed to get his gutter runners through into my backfield fairly easily and when he managed to get the ball away from Skag I knew things weren't going to end well. With only a few turns to go he got the winning touchdown which didn't leave me enough time to equalise. I did my best to smash up the few rats he had to put on the line but despite having a big numbers advantage for most of the game his gutter runners had won the day.

Meanwhile, Steve's Humans had managed to hang onto a nail-biting victory against Kern's Orcs. At one point one of his blitzers managed to make a 5+ dodge followed by a 4+ and then a 3+ dodge to get to a lone orc blitzer who was making a break for the endzone. He could only manage a both down result though leaving the orc standing. Fortunately, he failed his dodge roll and Steve narrowly avoided an equaliser to win 1-0.

Conclusion
We'd hoped to get a third game in but it was now after midnight and we decided to call it a night. There's no doubt the stars of my team were my runners, Skag and Kragg, who not only got all three of my touchdowns but did some sterling work on defence. Gutter runners are so frustrating to play against. Starting with AG4 and Dodge is insane! Obviously they're pretty flimsy but pinning them down long enough to hammer them is nearly impossible. I didn't help myself much though as I underused my blockers' Tackle skill to try and keep them in check.

I also concentrated far too much on smashing things on the line of scrimmage. I tended to have a numbers advantage but this left my runners needing to do all the work in the backfield. This was partly caused by the loss of my troll slayer but having my blitzers or maybe a couple of blockers back to help would've been sensible. Trouble is, with my piddling MA the rats can run circles around me.

Matt tops the table then with two wins from two. That leaves me in second thanks to my touchdown margin over Steve who also has one win. Kern is currently winless at the bottom of the table but I'm playing him next and I'm not feeling good about playing all those black orcs with just one of my troll slayers! He's back to full strength too as he was able to afford a new thrower to replace the one he lost.

Not sure when the next session will be but it's looking like June/July so I'll hopefully have both the Orc and Human teams painted up and we can have some much more photogenic games! Looking forward to painting something other than DE to be honest. Shame the Humans are purple too!!
Posted by From The Fang at 17:00:00