Dark Eldar (or is that Ynnari?) for the Doubles - Part 4 - Finished (sort of) 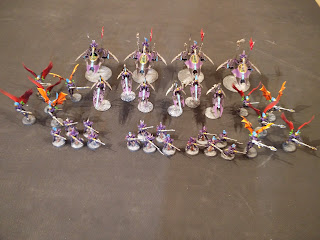 Just packed up my army for the doubles at Warhammer World this weekend. I should probably be getting some sleep in preparation for a long day's gaming tomorrow but I wanted to show you how I've got on with my Dark Eldar painting project for the event. I'd got the following in various states of painted that I hoped to have ready in time:


Well, after a bit of a test session on Wednesday (which I had hoped to blog about before now), we decided to ditch the Archon and one of the Reavers (along with his cluster caltrops) in order to squeeze Maugan Ra in as my HQ choice. I wasn't too bothered by this as my Archon was the only thing I'd managed to get "finished" for Double Trouble. I'd have been annoyed if I'd put hours into him in this project only to write him out of the list. I can cope with one Reaver not being involved!

Anyway, apologies for the crappy pictures but it's late and I couldn't be bothered to set things up properly. Maybe I'll get round to some better pictures at some point. Here's a summary of what I've been doing since the last post. 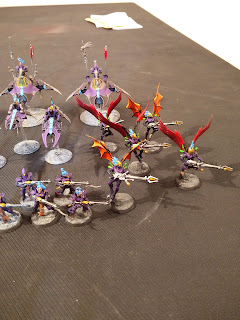 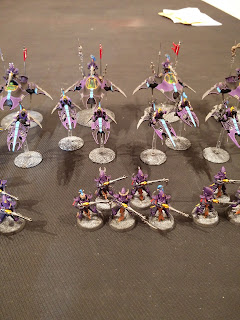 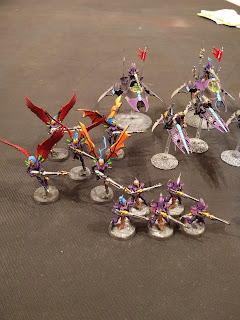 I've rolled out the orange and red wings to the rest of the Scourges. Painting the black bits back in on the orange took far more time than it should've last night but I'm happy with how the wings have turned out. It did mean that I didn't get time to do the vials/pipes properly or paint their armour properly but hopefully the bright wings will distract people from that! I never got round to getting the airbrush out for them so opted for a bit of a Jokaero Orange basecoat then 3 thin coats of Troll Slayer. Probably would've been quicker with the airbrush but that would've meant painting in the garage rather than on my knee in the lounge and "spending time" with my missus.

I updated the paint job on my fourth venom (it had previously been painted with Liche Purple which didn't match the rest). Once they were all done I added a couple of transfers to the flags and glued in the gunners. Out of interest, did anyone else find the gunners were leaning back quite a way or is this just because I've used the ones from the Raider sets instead of the wyches? I ended up filing their feet down so they stood up straighter.

I've tidied up all of the Kabalites with purple shoulders and knees to match the gunners and Reavers. I unfortunately haven't had time to do ANY of the line highlighting on them, the Scourges or most of the Reavers. It's a shame but hopefully I'll find the motivation to come back to it later.

Well I'll be taking plenty more shots of them at the tournament tomorrow so hopefully you'll get a better look at their paintjobs then. For now it's midnight and I should really turn in. I'll try to get battle reports for the tournament up early next week. I should have more time for blogging over the next few weeks as I won't be frantically painting. I do want to get the Blood Bowl teams ready for the next session mind you...
Posted by From The Fang at 00:00:00